Diners in Toronto may be long past their glory days—and yet, these nostalgic spots endure across the city. Toronto's greasy spoons are reliable sources for all-day breakfasts and homestyle comfort foods. They're not fancy, but they're familiar—and that's why we love them.

Here are my picks for the top diners in Toronto by neighbourhood.

In business since 1955, Vesta Lunch is a divey, retro diner that serves hungry patrons 24 hours a day. The backlit menu boards feature classic greasy spoon fare like all day breakfasts, souvlaki dinners, and fish and chips.

The Beaches location of Sunset Grill is the original that's since spawned an empire of breakfast joints. Their French toasts, waffles, and egg-focused creations are all equally beloved among diners.

Chew Chew's Diner is a greasy spoon where the all-day breakfast menu boasts an abundance of choice. Find over a dozen variations on eggs Benedict, 20 types of omelettes, and classic egg breakfasts.

Hollandaise Diner is just what this stretch of the street needed. The daytime destination is all about all-day breakfast, and the menu checks all the boxes for every imaginable a.m. craving.

The Lakeview is a classic diner open around the clock. The expansive menu has been updated and upgraded in recent years, but still very much adheres to the genre, offering tasty, hangover-crushing foods like all-day brunch, tuna melts and clubhouse stacks.

Donlands Diner has been around since 1955 but after a big renovation at the end of 2016 it was brought back to its former glory. Standard breakfasts and omelettes are go-to’s here, along with hearty after-five options like pork chops.

Slide into a booth at The Grille at pretty much any hour of the day to enjoy everything from breakfast to late night eats. This diner doubles as a bar, too, so if you'd like a beer with your all day breakfast, you're in luck.

The Purple Onion is the ultimate destination for classic diner fare. They serve all day breakfast, speciality sandwiches, salads and steaks that won't break the bank.

The bright red exterior of the George Street Diner is hard to miss. Inside, the charming retro lunch counter slings breakfasts, sandwiches, salads and daily specials. 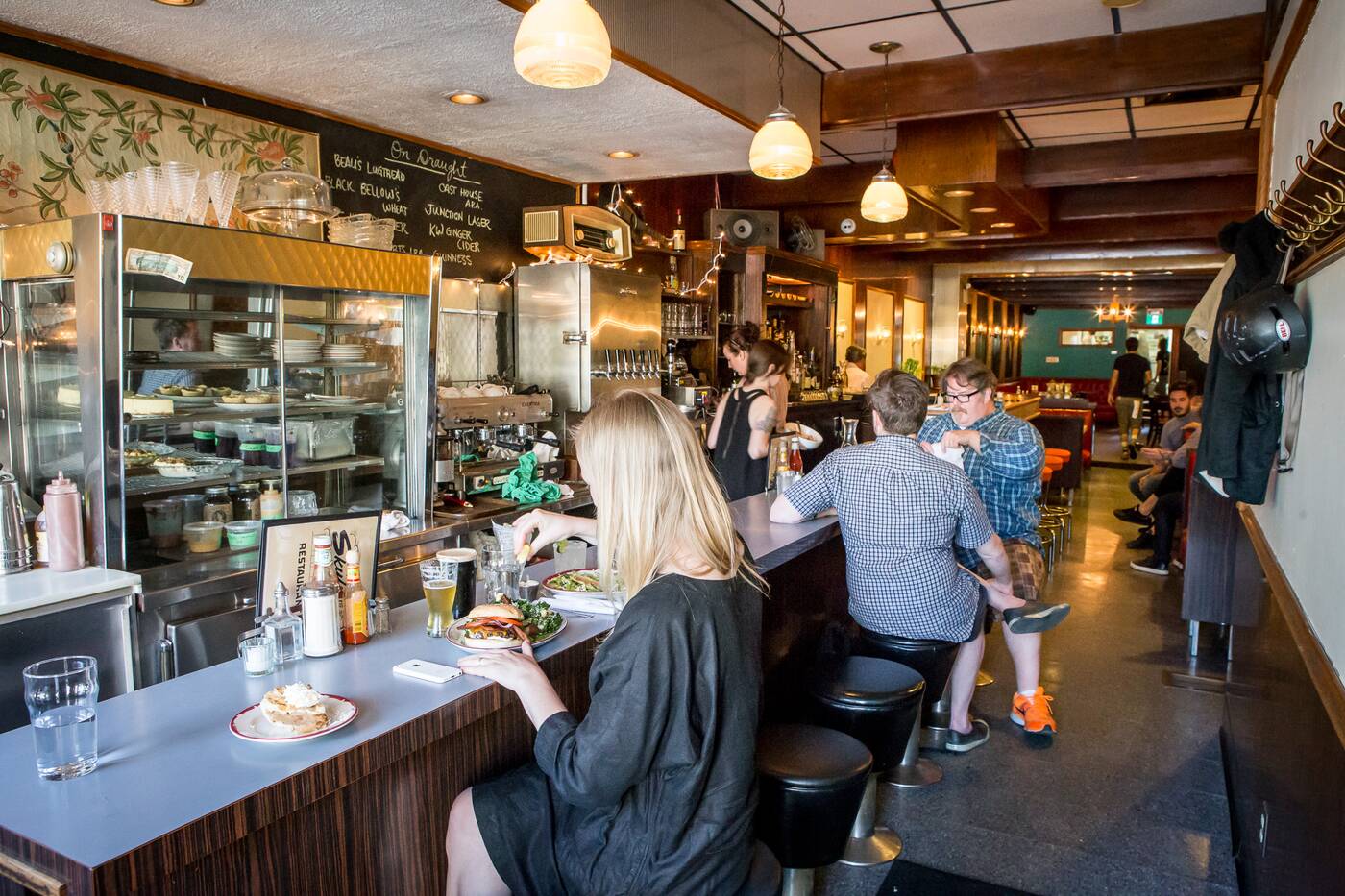 Dig into a massive burger at the Skyline Restaurant counter. Photo by Jesse Milns.

While the neighbourhood is plentiful with diner options, Okay Okay Diner on Queen East is a local fave for all day breakfasts and lunches featuring triple-stacked sandwiches and souvlaki platters.

Mars Food boasts an interior with chrome, vinyl and Formica charm. Open late into the night on weekends, it's an ideal spot for pancake breakfasts after last call.

The Homeway has been a North Toronto staple for more than half a century. Found at the corner of Erskine and Mt. Pleasant, the restaurant serves up all your brunch favourites.

Avenue Open Kitchen is a longstanding luncheonette where they do brisk business on workdays, dishing out short order standards like three egg breakfasts, smoked meat sandwiches and hearty daily specials with foods like chicken soup or mac and cheese.

White Lily Diner is a charming spot near Queen and Broadview where the food is eclectic and elevated but stays true to pure diner values. Munch on offerings of full English breakfasts, patty melts and lemon meringue pie.

Satisfy nostalgic cravings at The Amazing Ted's Diner, which has been kicking it old school since 1954. The menu boasts familiar greasy spoon fare like egg and pancake breakfasts.

UFO Restaurant is a remnant of simpler times on West Queen West. Here, early birds are rewarded with full breakfasts at a discount, though you'll find the food quite wallet-friendly at anytime of day.

Fran's at Yonge & College is an institution, and while some might say it's past its prime, most would be sad if it ever closed. She's kind of like an old friend that's been there for you at your worst (or drunkest), welcomed you without judgment, and fed you eggs at 3 a.m. 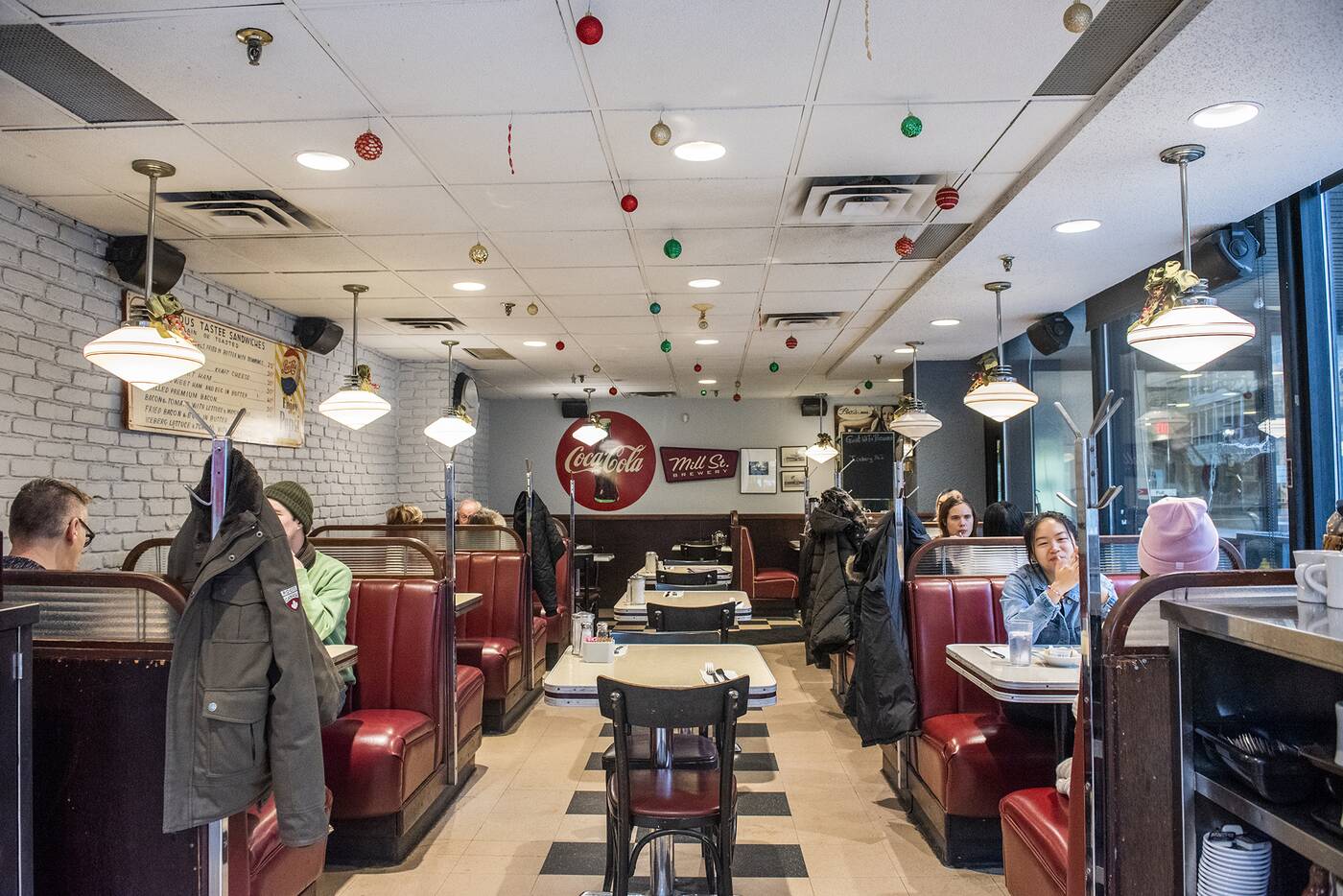 It doesn't get more retro than Flo's Diner. Photo by Hector Vasquez.

The Senator is one of the longest-standing continually-operated restaurants in Toronto. The landmark excels at classic comfort foods including staples like meatloaf and liver and onion entrees.

Good Bite has been serving this neighbourhood since the 1969, dealing in homestyle favourites like corned beef hash and hot turkey sandwiches doused in gravy and served with sides of peas and fries.

Hazel's deals in your standard dirty diner fare while majoring in hangover-crushing breakfast foods. The aptly named Hangover Cure is one such hearty dish featuring a burger patty topped with a fried egg over a pile of beans.

The Coach House Restaurant and Tavern is a bastion for cheap eats on Yonge St. Find breakfast specials (including some pretty fluffy waffles) listed alongside cheeseburgers and souvlaki dinners—none of which will break the bank.

Flo’s Diner is a semi-hidden upper floor hangout with a quirky retro vibe and even quirkier deals. They do classic breakfasts, waffles and tasty shakes.