Many of the best macarons in Toronto were free yesterday to celebrate Macaron Day. Led by La Bamboche for the second year, 18 patisseries around the core and the GTA - including spots in Richmond Hill, High Park and Victoria Park - gave one free macaron to customers who said the magic words. No purchases were necessary, and 25% of the day's macaron proceeds were donated to Red Door Family Shelter. Nadege Patisserie, the shop that first brought Macaron Day to Toronto three years ago, celebrated separately, with 50% of proceeds going to Meal Exchange and no free giveaways.

Macarons are most easily described as an almond meringue sandwich with filling, and Toronto is one of the best places in the world to sample this confection. Although some connoisseurs believe in the one true macaron - the original Laduree from Paris, macarons evolved when they were brought to Italy, and they continue to evolve as recipes change hands.

Now, what makes the "best" macaron is a matter of personal preference in a mind-boggling array of factors - the style (French vs. Italian), the size, the thickness of the feet (i.e., the rim), the ratio of cookie-to-filling, the texture of the cookie, the type of filling, the flavour, and even the consistency of a particular patisserie. Luckily, Toronto offers plenty of variety.

This year, NadĂ¨ge doubled their flavour offerings to include limited-production specialties, such as Whiskey-Chocolate and Champagne from the holidays. They also created new flavours, such as Chili-Cherry, Olive Oil and Camembert. The Chili-Cherry had a vengeful depth, the sweetness from the cherry-chocolate subsiding for the heat of the chili to kick in. The Camembert was surprisingly nuanced, the cheese flavour prominent without being overwhelming.

Many of the patisseries participating in the giveaway also had special flavours. Rahier made Raspberry-Rose-Lychee, a combination of flavours called "ispahan" made famous by Pierre HermĂŠ, a fitting tribute to the originator of Macaron Day. The raspberry jelly inside the rose and lychee ganache was unique amongst the day's offerings.

The Sweet Escape offered Popcorn, in a shell that was crunchy like its namesake, and Le Dolci, which is a patisserie that also offers confectionary classes, created Honey-Lemon from Canadian wildflower honey. I think the sweetness of the honey would have been better balanced and less cloying with more lemon curd, like the ones offered at Patisserie 27. Patisserie 27 had a very textured cookie, and a strong Japanese influence, represented in its Yuzu (a citrus fruit) flavour with a yellow-and-green coloured shell like a yin-yang. 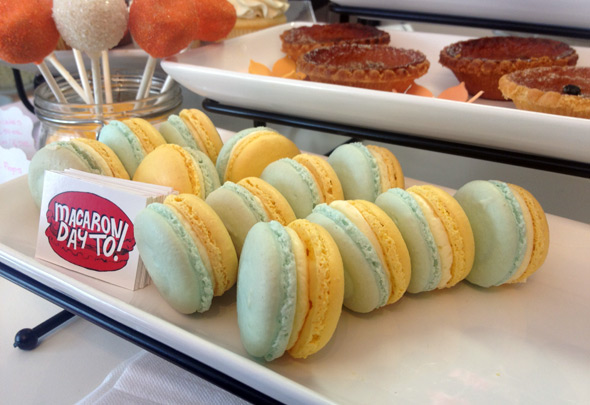 La Bamboche and Daniel et Daniel both offered only Red Velvet. The cream cheese filling was a ganache in the former, and butter cream in the latter. I preferred the consistency of the ganache as it felt more like cream cheese; however, at Moroco Chocolat, I appreciated how the airiness of the butter cream filling complimented its Creme Brule and Sesame.

The Wedding Cake Shoppe and Bobbette & Belle were similar in size and both had a delicate cookie. Petite Thuet had the thickest macaron, while Ma Maison's was bigger, but more flat.

Ma Maison's Sea Salt Caramel was a standout in the ubiquity of Salted Caramels, which was also the only option offered at Butter Avenue. Butter Avenue and Ruelo both had a harder cookie, while the cookie at La Cignogne had the strongest taste of almond which permeated through all its flavours.

Like last year, there were places that ran out of macarons before closing. Yorkville Espresso was completely cleared out before 6pm, and Patachou had a sparse selection for purchase. Frangipane only prepared a hundred macarons, and the ones left for purchase were disappointingly stale.

If you missed out yesterday, keep your eyes out for next year! In the mean time, there are still so many patisseries with macarons waiting to be discovered. I'd like to go to J'Adore Cakes Co. next, as I ran out of time. Have you found your best macaron yet?