Behind the scenes at Cool Beer Brewing Co.

Cool Beer Brewing Co., located near the intersection of Islington and the Gardiner, probably doesn't immediately spring to mind when you're asked to name the breweries currently helping lead Toronto's craft beer surge. And yet, while you may have never had a Cool Lager, a Millenium Buzz Hemp Beer, or a Stonewall Light, it's almost certain that you've had a beer brewed at Cool Brewery.

That's because aside from brewing their own award-winning beers Cool Brewery also provides contract brewing and co-packing facilities for a dozen other local brewing companies, meaning their 28,000 square foot facility in Etobicoke is actually responsible for a lot of the great craft beer currently being enjoyed across Ontario.

I had a chance to speak recently with Cool Brewing's Andrew Costa and their brewmaster Adrian Popowycz about what exactly goes on at Cool, why canning machines can be so tempermental, and why they consider themselves the Kevin Bacon of craft beer. 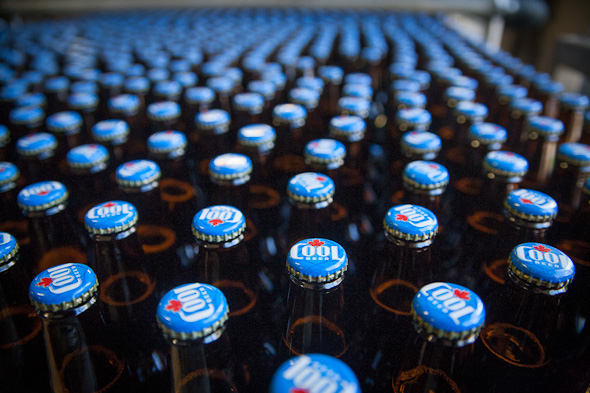 Can you tell me a little bit about the the history of Cool?

Andrew: Cool Beer Brewing Company was founded in 1997 by Bobby Crecouzos in Brampton, Ontario. Bobby had a vision to brew quality, all-natural beers and started with his flagship brand, Cool Lager, a 5% blond lager. By 2003, Cool was sufficiently well-established and launched another high-quality beer, Millennium Buzz Hemp Beer, a 5% hemp-based amber lager made with the finest BC hemp, dark roasted Alberta malt and choice German hops.

With Cool Beer Brewery expanding, in 2005 we outgrew our home in Brampton and moved to a state of the art, 28,000 square foot facility in Etobicoke at 164 Evans Avenue. Four years later, Cool launched another brew, Stonewall Light, a 4% smooth, refreshing, light lager with a hint of lime, which currently is still our newest beer.

Because Cool relied heavily on word of mouth, we were able to keep price points for all three brands low to appeal to customers. And while we originally started out kegging our beer for distribution to restaurants, during the growth and expansion of the brands, we started bottling all three brands and selling it in the LCBO and Beer Stores across Southern Ontario.

You guys have slightly different price points and packaging than other brewers, right?

I know that Cool Beer Brewery offers contract brewing services to other brewers. What exactly does that entail?

Andrew: Cool Beer Brewery is fully equipped to co-pack or contract brew high quality beer, or any other alcoholic or non-alcoholic beverage. Our co-packing and contract brewing capabilities are targeted towards existing commercial brands with existing volumes or commercial licensed breweries looking to develop brands or holders of a brewing permit looking to build a brewery but require a co-packing bridge/solution. 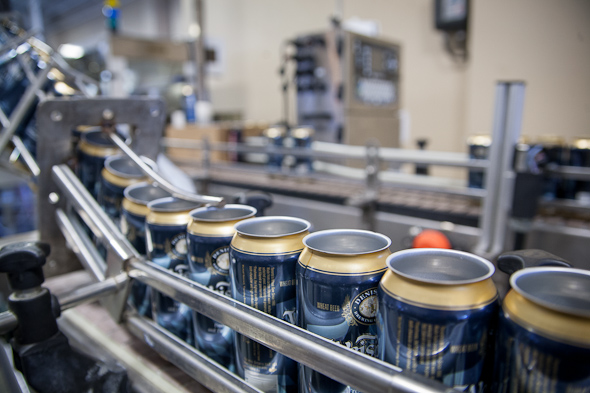 What exactly does that mean?

Andrew: Once approved, Cool brews the recipe, bottles and/or kegs the beer and packages it. We are not responsible for sourcing ingredients, bottles, packaging, or coordinating distribution for the other brewery.

What can brewers expect to pay to start a contract brewing operation?

How many breweries currently contract brew out of your facilities? 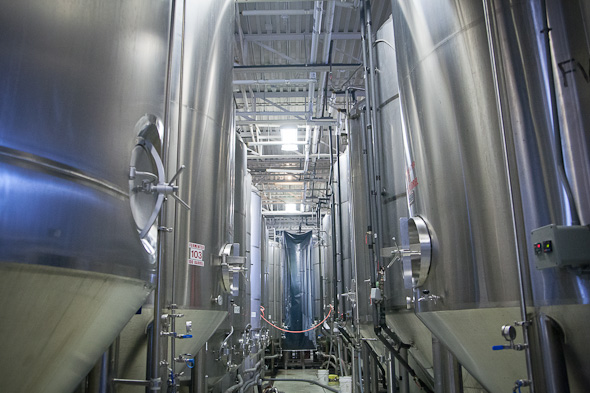 When I visited recently with the guys from Hogtown Brewing, I chatted briefly with brewer Vince Marsman about your new canning machine. He indicated that you guys were really excited to get it up and running, but that you've been having some issues with the machine. What's the deal?

Adrian: Unlike linear can fillers which basically pour beer into an open can at atmospheric pressure, Cool's new filler uses a counter-pressure approach in which the can is filled under pressure. This counter-pressure technique minimizes risk of airborne contamination. Furthermore, it allows much more flexibility for the brewer to can beers of different styles, carbonation levels, and temperatures — not to mention filling cans at much higher speeds. It can easily be argued that cans are actually better for craft beer because a can seam is more hermetically sealed than the crown of a bottle.

As for the issues, can fillers that operate at over 180 cans a minute are intricate, precision-built apparatuses that require finely-balanced components to operate smoothly and there is little room for error. Because of this they are very expensive machines.

This machine is one of the first — if not the first — in North America from this particular manufacturer. Like any newly-designed machine, there are always unforeseen and unexpected events and issues that creep up during commissioning. Add to this the fact that the machines are manufactured overseas and it can add another level of complexity because getting parts on a timely basis can sometimes be a problematic. While we would have preferred to be up and running by now, we can certainly state that we now have very intimate knowledge of the machine, which will benefit us moving forward. 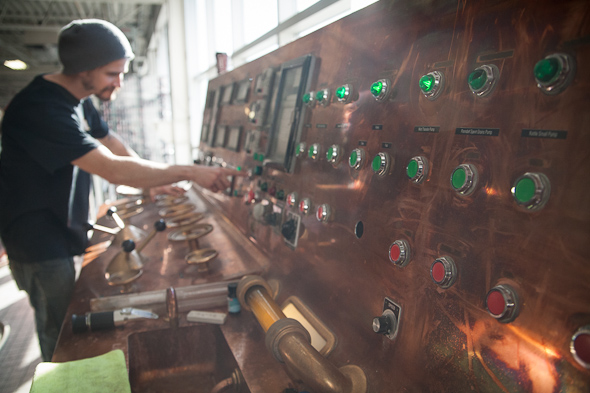 How many brewers do you have on staff? As the Cool brewmaster, what's your relationship with the other brewers who come in and use the facilities? For example, I know that the Hogtwon guys hired Jay Cooke to brew their beer, but are there other contract guys who will essentially just hand you a recipe? How does that work?

Adrian: At Cool the quality of our beers is paramount. For a brewery of our size we have one of the best labs around. We know exactly what the quality of our beer is and will not release anything that does meet our specifications. We apply this dedicated approach to all of our contracts. We treat every contract brew and co-packaging project as if it were our own. No short-cuts and everyone's 100% committed to do their best efforts. This is why cool is such an attractive place for contract work. We are sort of the Kevin Bacon of brewers because there are probably about six degrees of separation between us and all other Ontario's craft breweries. Most of them have some reason to come to Cool.

Andrew: At present we have one brewer, Vince Marsman, who has been with Cool for five years and yes, Adrian is our Brewmaster. He is an ex-Brewmaster at Black Oak and Great Lakes, and joined our team as of September. Adrian liaises with the other brewers to make sure everything is set up according to the wishes of the contract brewer.

Adrian: Every contract brewer has a different level of involvement. Although due to legalities they are not allowed to physically be involved in the process, they can certainly be there to advise and make decisions regarding their brews. For some contract brewers, Cool has been brewing for them for years and they will simply want technical updates on the progress of their brews, whilst others want to babysit their beers . Most, once they feel comfortable that we would brew their beer exactly as they would, will let us proceed with minimal involvement.

After all, Cool has been around for 15 years and has an enviable track record for quality and consistency. Although the house brands may not be the most "out there" in terms of styles, they actually are the hardest to brew as you can't hide imperfections behind lots of hops or spices. 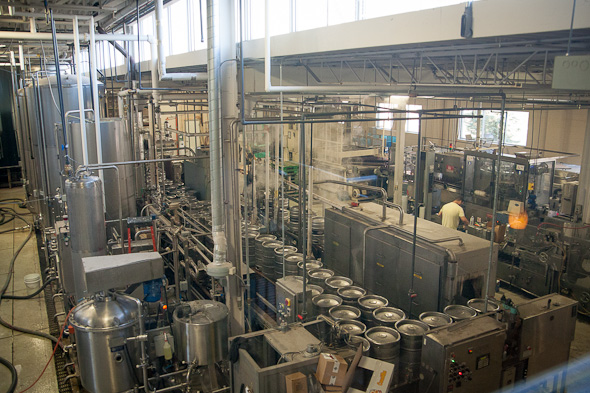 What is your capacity at Cool? How much beer can you/do you produce?

Andrew: Cool Brewery is equipped with two German copper kettles and 37 holding tanks. We produce approximately 25,000 hectoliters of beer annually for our own brands.

Adrian: Our batch sizes can range from 70 to 140 hectoliters

Cool Beer is distributed to over 350 Beer Stores, 380 LCBOs, and approximately 550 licensees across southern Ontario. They'll also be adding cans of their brands to their line-up by the end of the year. For more information about Cool, visit their website,, or check them out on twitter @CoolBeerBrewCo. 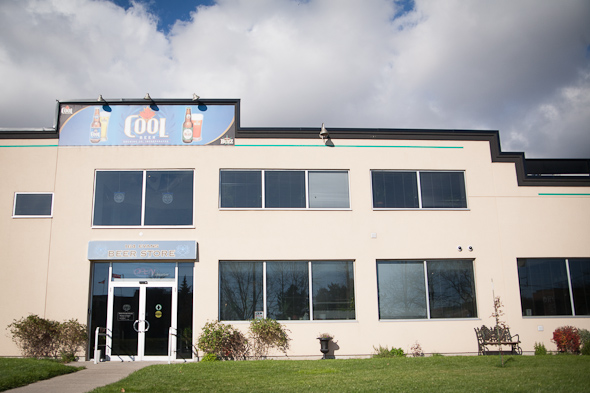