If you've walked, driven, or biked around the Markham and Steeles area, chances are you've caught at least a passing glimpse of one of the newest additions to that relatively (at least until recently) vacant area. Several brightly multicoloured buildings standing monolithically next to each other, forming that ever-present natural landscape of Scarborough: a strip plaza.

All jokes aside though, this shopping centre does have several interesting quirks. The first is that although all the buildings are seemingly designed with the sole purpose to bore you to death, the vivid splashes of colour are actually a brilliant idea. Not only do these colours make the otherwise-godawful slabs of concrete much more interesting, they also make a quick reference point when describing the location of a particular store/restaurant in the plaza.

Second, this complex is almost entirely comprised of stores aimed at the South Asian demographic. You can almost think of it as the uptown version of Little India (though I will no doubt get naysayers booing me for drawing this comparison).

By the way, don't worry about the name of the strip mall. It's so obscure that I literally had to go around the plaza and look at a small sign at the very front of the complex just to get a glimpse as to what it is. Just call it "the colourful plaza at Markham and Steeles," and locals will know what you're talking about.

Planning to stop by? Here are some places to check out while you're there. 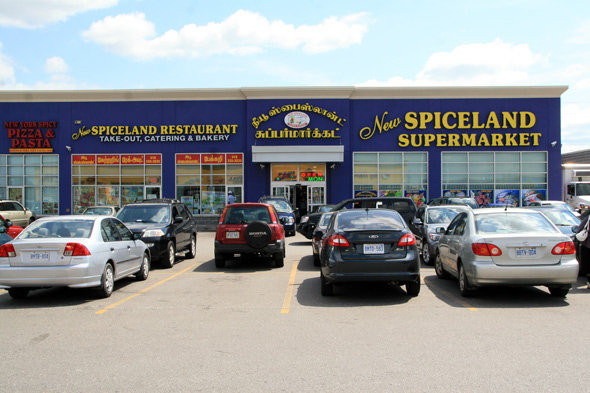 New Spiceland Supermarket
Arguably the closest thing this strip mall has to an anchor tenant, New Spiceland Supermarket is a large grocery store that stocks almost everything you need to satisfy your South Asian product needs. From curry mixes to Indian sweets, the amount of shelf space dedicated to this market niche is impressive, bringing the phrase 'one stop shop' to mind. The only downside is that everyone else seems to think so too, which results in an already rather cramped interior feeling even more so. Still, they're open very late, and have an excellent takeout joint attached to the store (though that, too, is really busy during mealtimes.)

Lingan Cream House
The plaza's resident ice cream joint, Lingan Cream House also functions as a small takeout-only snack and dessert place. They (of course) serve lots of Indian snacks and desserts, ranging from nice round vadai fritters guaranteed to tickle your taste buds, to kulfi, the ever-famous Indian ice cream. But the main draw for me is their large frozen dessert selection, ranging from 'regular' ice cream to sherbet sundaes of all shapes and sizes. Everything is freshly made on-site, so you can think of this place as an Indian Marble Slab Creamery. They also serve larger meals such as chicken kothur roti. Overall, an interesting mix of offerings that you should stop by and check out. 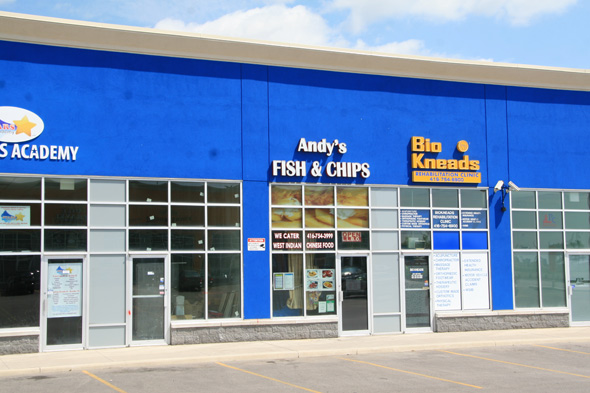 Andy's Fish and Chips
If you're in the mood to eat something that has nothing to do with South Asian culture, this modest place should be right up your alley. As with many of the places profiled in my articles, there's an interesting twist: this small and rather cramped restaurant actually offers a tantalizing combination of your regular fried fish and fries with various Asian dishes (no, seriously). Where else can you chomp down on battered cod with a side of chow mein? Or wolf down onion rings with a serving of General Tao Chicken? Last time I checked, the owner is Caribbean and the chef is Chinese, hence the interesting amalgamation of offerings. Be sure to try their daily specials, the most notable one being fried shark for under $5 on Wednesdays. It's not fine dining, but it's a unique blend of offerings that hits the spot when that grease craving hits. The only downside is that their fries are a bit hit and miss.

Ceylon Flavour
If you're interested in trying Sri Lankan food but wish to sample it in a more upscale and less chaotic environment than most of its counterpart restaurants, then this place is right up your alley. Featuring a simple, clean, and almost barren dĂŠcor, the restaurant offers a good variety of Sri Lankan favourites, all of which have spice levels that can be tailored to suit your taste. Some of their recommended specialties include the juicy mutton kothu rotti and the crispy vadai fried dumplings served with sambal sauce. An interesting feature is that the restaurant's colourful paintings are the work of a talented disabled young Sri Lankan artist which you can bid for on the restaurant's website, making the experience a feast for your eyes and your taste buds. For a Sri Lankan experience that's strictly takeout, head to Amma Take-Out and Catering at the north end of the complex.

Tea Tree Drinks and Desserts
Now this is something you don't see every day. At first glance, this place looks like your typical modern bubble tea place. With various flavour combinations ringing in around $3 and good quality ingredients, it seems like a nice place but nothing too special--until I started seeing signs for samosas and other Indian snacks. Lured by the seductive possibility of chomping down on fried spicy Indian dumplings while cooling myself down with a glass of sweet taro milk tea, I was hooked. The combination works much better than you may expect! It's like the United Nations...of dessert. 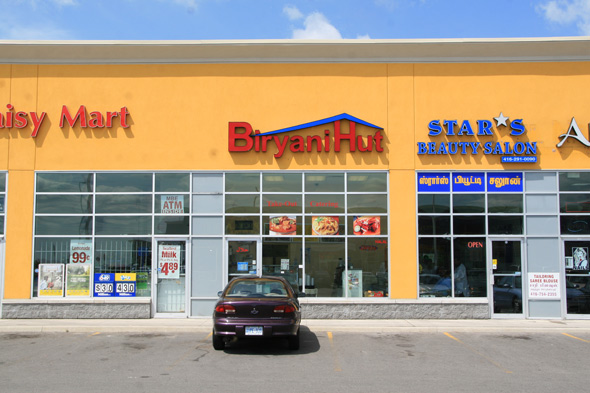 Biryani Hut
There are quite a few places in the area which sell biryani, but based on the semi-constant stream of customers walking out with aluminium foil trays, this is one of the better ones. After trying it out, I can confidently say that they serve good biryani at very cheap prices--in other words, my kind of place! While the store is small (no seating), the offerings here are impressive. They have chicken biryani for around $4, as well as various curries, rice dishes, and traditional Indian dessert like rasmalai and kulfi. They also stock a lot of packaged chulbule snacks, which I'm reliably informed is a very popular snack food amongst the South Asian population.

Posted by Darren "DKLo" Susilo. He hangs out on the twitter.