Toronto Beer Week, now in its third year, will run from September 14th to the 22nd and will be the perfect cure for the city's collective TIFF hangover. As the international throngs depart, the city's beer drinkers can take back the city and indulge in an array of local beers at bars, pubs, and restaurants citywide. And, thanks to the fact that this year's Toronto Beer Week has been deemed an "Event of Municipal Significance," we beer drinkers will also be able to party like movie stars until 4am, albeit likely with decidedly more beards and less Ryan Gosling.

Each consecutive year has seen TBW grow even larger in scale and, this year, there seems to be almost too many beer tastings, beer dinners, and pub crawls to handle. So, with a view to helping you make the most of Toronto Beer Week, here are my picks for a dozen can't miss events taking place around the city next week.

Barrel Bragging Rights
This event pairs Toronto brewers with Toronto beer writers (i.e. those that remembered to contact a brewery in time...) to collaborate on a one-off beer in a competition of 38L barrel-aged brews. The pairings for the competition include Matt Caldwell (One Beer At A Time) and Erica Graholm from Steam Whistle, Graham Duncan (NOW) and Duggan's Brewing Company, Crystal Luxmore (The Grid) and the Granite Brewery, Josh Rubin (The Toronto Star) and Black Oak Brewery, Chris Schryer (Toronto Beer Blog) and Cheshire Valley Brewing, Jordan St. John (Saint John's Wort and QMI) and Beau's All-Natural Brewery, and Michael Warner (A Year of Beer!) and Amsterdam Brewery. With all that beer-nerdery in one room, you can bet on two things: there are sure to be some good beers being poured and this event will be the best covered event of the week.
WHEN: Friday September 14th, 5:00pm
WHERE: The Monk's Table
HOW MUCH: $30, but that includes a branded glass, some food provided by the Monk's Table, and, most importantly, unlimited beer until the barrels run dry.

C'est What's 24th Annual Festival of Craft Breweries - Seasonals Saturday
One of the bars taking advantage of the extended operating hours, the array of taps at C'est What will be certainly be a go-to destination for all of Toronto Beer Week, but Saturday you'll be able to sample from an impressive forty-eight different beers including fourteen casks. Brewers featured will include Durham, Wellington, Granite, Amsterdam, Black Oak, Flying Monkeys, Neustadt, Cameron's, Church-Key, F&M, Railway City, Hogsback, Double Trouble, Steam Whistle, Beau's, Spearhead, Muskoka, Nickel Brook, Grand River, Lake Of Bays, Barley Days, Junction, Hogtown, Cheval Blanc, Gananoque, McAuslan, Cheshire Valley, and Mill Street--so yeah, a lot..
WHEN: Saturday September 15th, 5:00 pm - 3:00 am
WHERE: C'est What
HOW MUCH: Free to attend with most beers available to sample for just a buck. 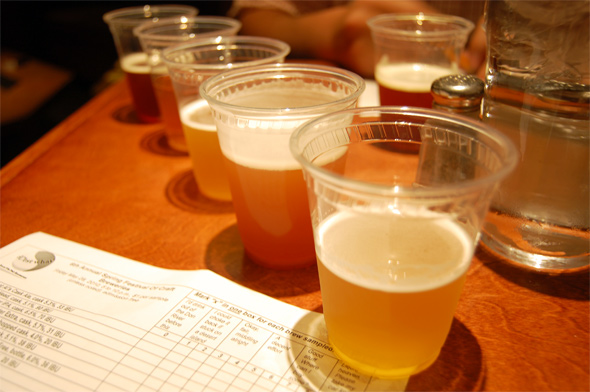 The Ontario Brewmaster's Cup Awards Party
A newly-minted award created this year by four Toronto beer writers including Crystal Luxmore of The Grid, Greg Clow of Canadian Beer News, Jordan St. John of QMI/Toronto Sun, and, uh..me, we'll be crowning the best beer Ontario has to offer based on public voting. Winners have been crowned in four categories - Lagers, Pale Ales/IPAs, Stouts/Porters/Dark Ales, and Wheat/Fruit/Flavoured Beers - and we'll announce the top beer from among the four category winners - Steam Whistle Pilsner, Muskoka Mad Tom IPA,Wellington Imperial Stout, and Denison's Weissbier. Come help us celebrate with a draft selection of the 16 beers involved.
WHEN: Sunday September 16th, 5:00pm - 12:00am
WHERE: The Rhino
HOW MUCH: Free admission, cash bar

The Rock The Danforth Pub Crawl
Join Toronto Beer Week co-founder and current Great Lakes Brewery representative Troy "T-Bu" Burtch as he and Sam Corbeil of Sawdust City Brewing and Cass Enright of The Bar Towel lead a hoard of thirsty travellers across the city's east end. The tour commences at the newly-minted 417 Restaurant and Lounge then hits Brass Taps Pizza Pub, The Only Café, Morgans on the Danforth, and Sarah's Cafe and Bar. Along the way there will beprizes from Great Lakes, Sawdust, and Bar Towel and, obviously, a lot of beer drinking.
WHEN: The crawl starts at 5:45pm at 417.
WHERE: Various locations on the Danforth
HOW MUCH: Free admission, cash bars

Legends of Karaoke
Drinking beer needn't be all introspective imbibing and careful contemplation of hop-forward flavours and malt-backbones; sometimes you just want to get sloppy drinking cheap draft and belting out some 80s rock. The Toronto Beer Week edition of Legends of Karaoke at Sneaky Dee's will be hosted by Bear Mad Love and John Joseph Pitts, will feature over 15, 000 songs to choose from, and, sure to make your version of "Don't Stop Believin'" even better, three dollar drinks before 11pm.
WHEN: Monday September 17th, starting at 8:00pm
WHERE: Sneaky Dee's
HOW MUCH: Free admission, cash bar

Drink Great Lakes beer somewhere
On Tuesday, Great Lakes Brewery will not only be at The Only Cafe with their excellent 25th Anniversary Saison, 666: Devils Pale Ale, Crazy Canuck Pale Ale and more, they'll also be taking over 12 of the taps at C'est What, so whether you're in the east end or the south, you'll have a chance to sip a few pints from Toronto's original craft brewer.
WHEN: Tuesday September 18th, 6:00pm at The Only, 5:00pm at C'est What
WHERE: The Only and C'est What
HOW MUCH: Free admission, cash bar

Green Flash West Coast IPA comes to Ontario
Thanks to North American Craft, Ontario beer drinkers will now be able to try a great beer from our neighbours to the south. Green Flash IPA is a highly acclaimed (93 at Beeradvocate and 99 at Rate Beer) IPA from San Diego and for the first time starting Tuesday will be available here. Check out the official launch and find out why beer nerds often get so worked up about the stuff that's brewing south of the border.
WHEN: Tuesday September 18th, 6:00pm
WHERE: Burger Bar
HOW MUCH: Free admission, cash bar 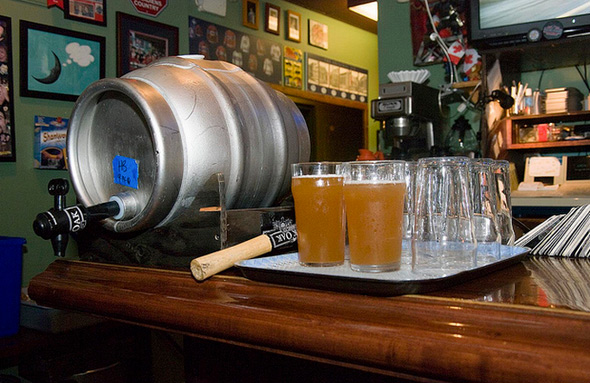 Sawdust City's Mighty Moustache Competition and Tap Feature
What could be more Toronto-hipster-friendly than a moustache competition featuring beer that not too many people have heard of yet? Enter your facial hair in a contest where judges will award prizes for the "mightiest" moustache or attend simply so you can tell people you've been drinking Sawdust City's great Lone Pine IPA, Golden Beach Pale Wheat, and Gateway Kolsch since before they were popular.
WHEN: Wednesday September 19th, 8:00 pm
WHERE: The Only Café
HOW MUCH: Free admission, cash bar

Rogue Beer Dinner and Tap Takeover at beerbistro
Also on Wednesday, and occurring at a decidedly less hipster-friendly venue, the semi-upscale beerbistro will be hosting a ten-course dinner with acclaimed beer writer Stephen Beaumont to launch great Oregon brewer's Rogue Ales in Ontario.
WHEN: Wednesday September 19th, 6:00pm
WHERE: Beerbistro
HOW MUCH: $125, tickets available by calling 416-861-9872

We Live For The Funk - A Night Of Funky Brews & Funky Tunes
My pick for the can't miss event of Toronto Beer Week, the 2nd edition of barVolo's Funk Night will feature experimental beers from Ontario's best breweries to the accompaniment of loud, funky vinyl. The beer will be available in limited amounts--just one keg per funky offering and only in ¼ and ½ pint sizes, but what the event is lacking in quantity it more than makes up for in quality and selection with experimental offerings from barVolo's own house ales, Amsterdam, Indie Alehouse, Muskoka, Bellwoods and more. And with beer names like "Dead Spadina Monkey," "Plumber's Butt," "What The Christ Happened To The Pumpkin," and "Gangsters Para-Weisse," you obviously can't go wrong.

Pro tip: Bring cash. The no-plastic venue has an ATM in the basement, but you can bet it'll be lined up and you don't want to waste any quality time you could be spending with those limited quantity brews.
WHEN: Thursday September 20th, ticket holders only from 6:00pm - 8:00pm, open to the general public after that.
WHERE: BarVolo
HOW MUCH: $15 for a ticket which includes a limited edition "Funk Night" glass and one drink ticket. $5 to get in after 8pm.

The 10th Annual Golden Tap Awards
Close out Toronto Beer Week with an all-out celebration of Ontario craft beer presented by The Bar Towel. The Golden Tap Awards recognize Ontario's brewing achievements as voted by the beer-drinking public and you can be sure that the tenth anniversary awards gala will be a good party with a more than a few decent beers on hand. You can actually still vote for your favourites (until September 17) then come find out who won and gossip about who is drinking what.
WHEN: Saturday September 22, sampling starts at 4:00pm, awards show at 8:00pm.
WHERE: Beerbistro
HOW MUCH: Free admission, cash bar

Please note that all the dates, times, and locations listed here may be subject to change so you should confirm the details before you head out. Please also note that there are many, many other events occurring during Toronto Beer Week and I strongly encourage you to check out as many as you can. And if you need someone to go with you, feel free to give me a call.

Photos one and three by Stephen Gardiner / Toronto Beer Week