10 places to eat and drink in Toronto's Koreatown North

Koreatown North is a stretch of Yonge St. between Sheppard and Steeles that’s flush with places to eat and drink. You’ll find just as many fun things to do in this two-block neighbourhood as its downtown counterpart. From karaoke to AYCE barbecue, this little stretch is bursting at the seams.

Here are my picks for the top spots to eat and drink in Koreatown North.

Located in a small plaza at the northern end of this stretch, the name of this BBQ spot means National School in Korean. Its old school marker is just one of the retro things about it. This restaurant’s walls are decked out in vintage Korean vinyl and and a chalkboard menu, too.

Just a bit further north than Kookminhakgyo, this BBQ joint is named after a slum in South Korea that still exists today. This restaurant’s decor replicates the small stalls that filled Daldongnae during the 1950s. Step back in time while you cook their delicious short ribs.

This udon house doesn’t serve Korean fare, but it’s located in the heart of Koreatown, with a corner spot just south of Finch. Resident chef Kevin Shin is a Kagawa-trained, udon making expert, which is why his bowls of wheat noodles are so incredible. 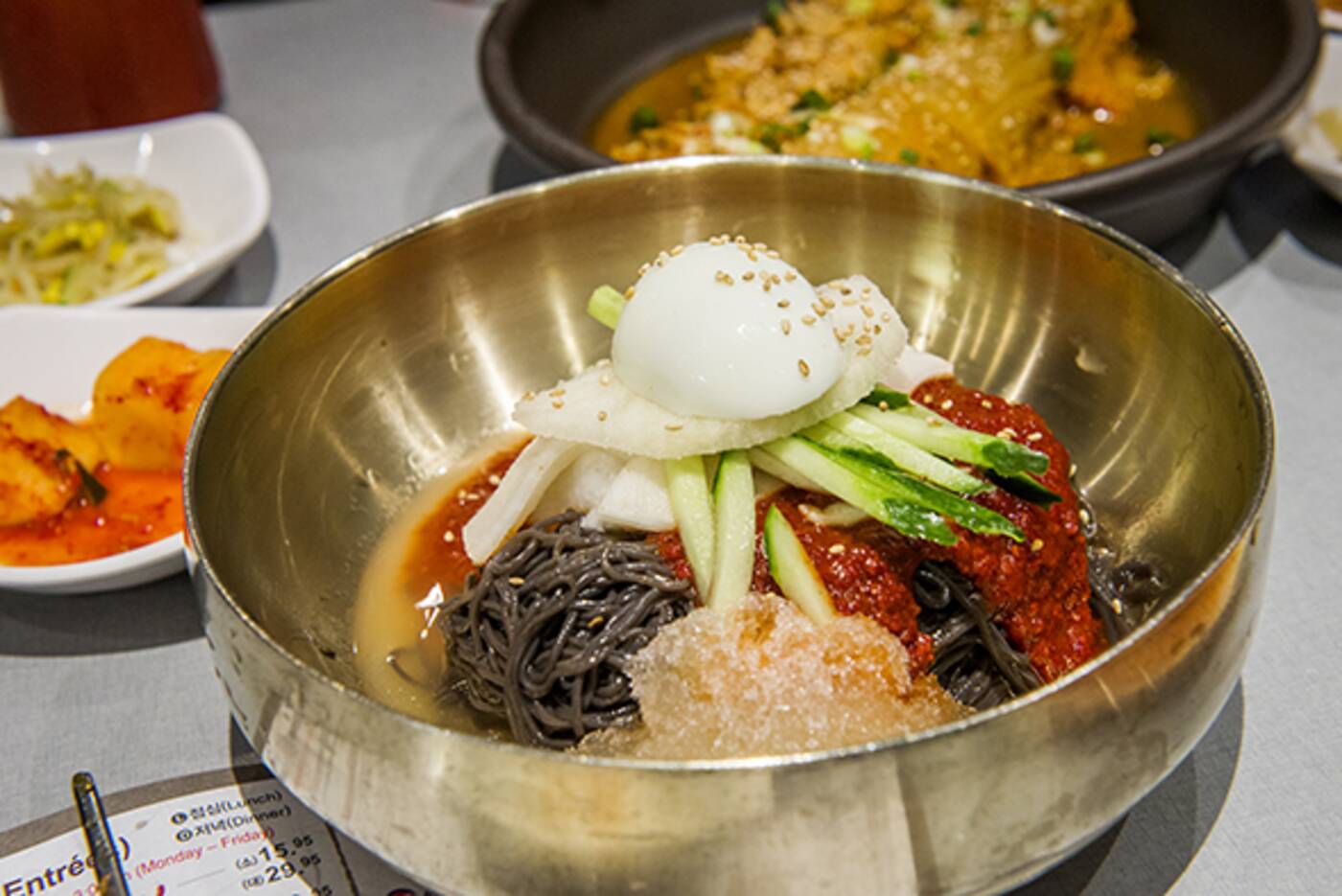 Noodles from Cho Sun Ok are made fresh and mixed with ice to keep it extra cold. Photo by Hector Vasquez.

Sing your heart out in nine languages at this karaoke spot. Twister has been a favourite in the area for years, despite the fact their giant song books might not actually include the one you’re trying to belt out.

With a modern interior and rice cakes with a kick, Go Topoki is located closer to North York Centre on Yonge. Their street food-inspired topoki dishes come in a variety of sauces, plus they have deep-fried snacks like seaweed spring rolls and veggie fries.

This 24-hour spot has long been a go-to in Koreatown North, especially because of its authentic and laid-back environment. Soon Dae Gook – traditional blood sausage – is a signature dish here, as is their internal organs soup, which is hard to find elsewhere.

This collection of stalls looks like a single restaurant from the outside, but head inside and you’ll find five restaurants here to satisfy a handful of different cravings. Head here for Taiwanese fried chicken, sushi burritos, wonton noodle soup, bubble tea or Japanese crepes. 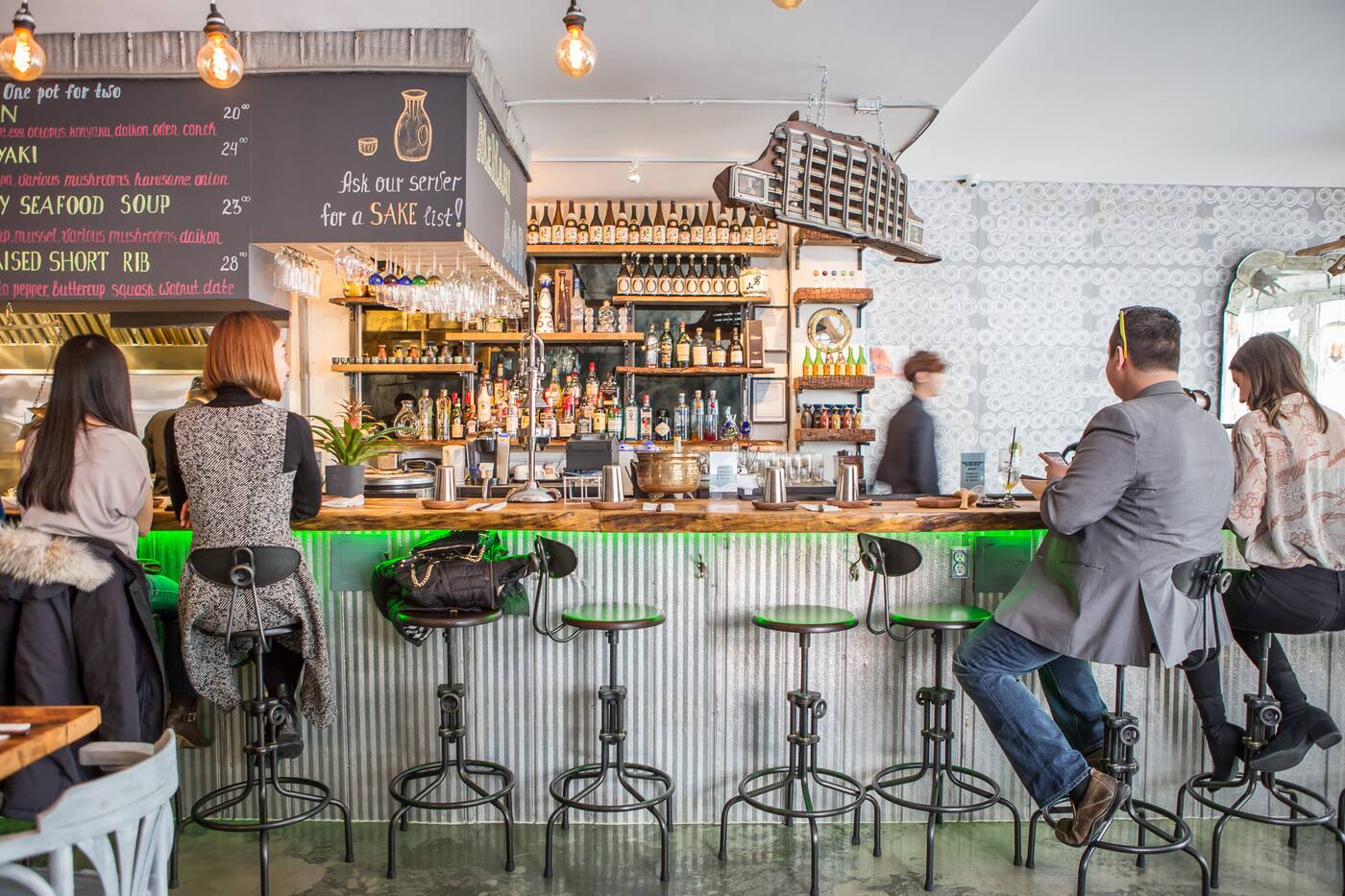 Sake and noodles hit the spot at MeNami. Photo by Jesse Milns.

If you’re a real K-pop fan, head to this karaoke spot just south of Finch. There are definitely more Korean songs than English ones, and the spot looks pretty dingy from the outside, but their machinery is updated and the vibe is pure fun.

Locals have long adored this 24-hour barbecue spot serving up traditional slices of sirloin beef and pork belly on the grill. The quality is consistent here and they have a seating area where you can really make yourself feel at home by losing the shoes and eating cross legged.

Known for their for naengmyeon – or traditional cold noodles – this well-lit restaurant remains an incredibly popular spot despite having been around for ages. Their noodles are made from arrowroot and are perfectly chewy. Seating is spacious.