Daldongnae is a Korean BBQ spot with a 50s Asian night mart vibe. The restaurant’s name is a take on the Korean term dal dongnae, which refers to the many government-sanctioned slums that sprung up around the country during the Korean War.

Decor here is a throwback to the heyday of those neighbourhoods, with tightly packed stalls and paraphernalia like old timey war photos and vintage cigarette packs. 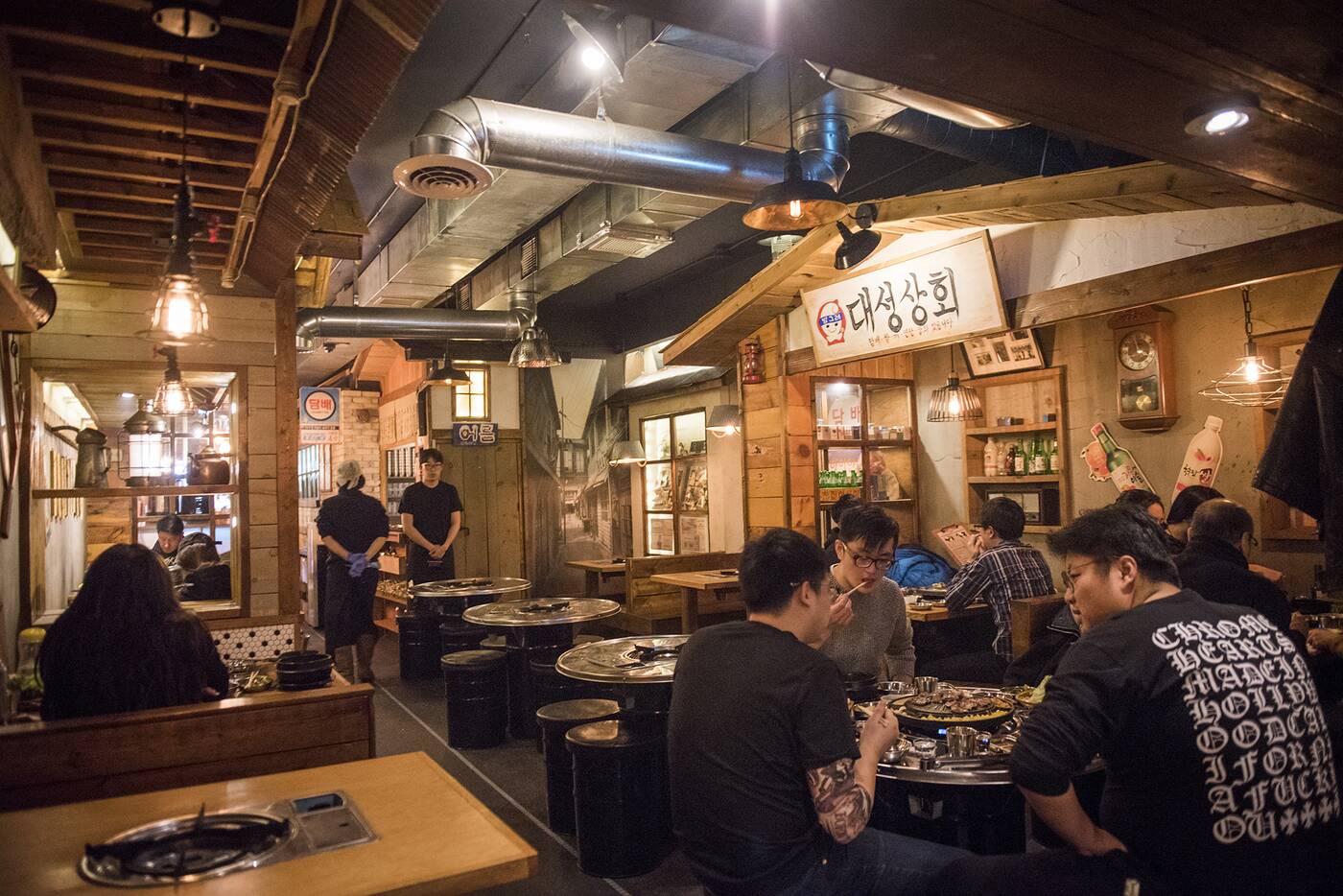 Though the space is narrow, it feels more cozy than cramped, and there are enough booths and round tables in the restaurant to accommodate 66 people. 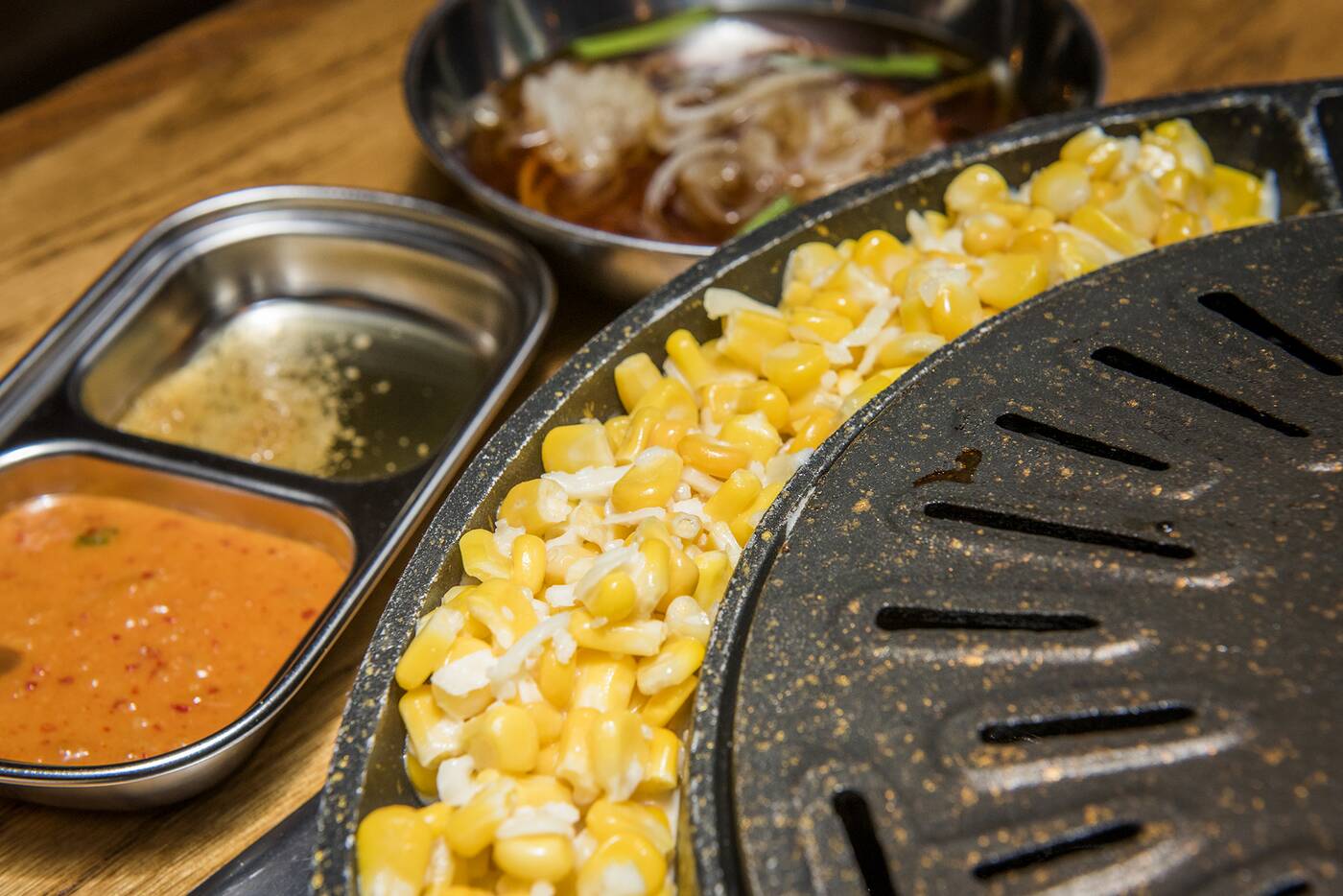 Aside from a grill, the pan you're provided with also holds kimchi, raw beaten eggs, corn, and garlic in special side compartments. 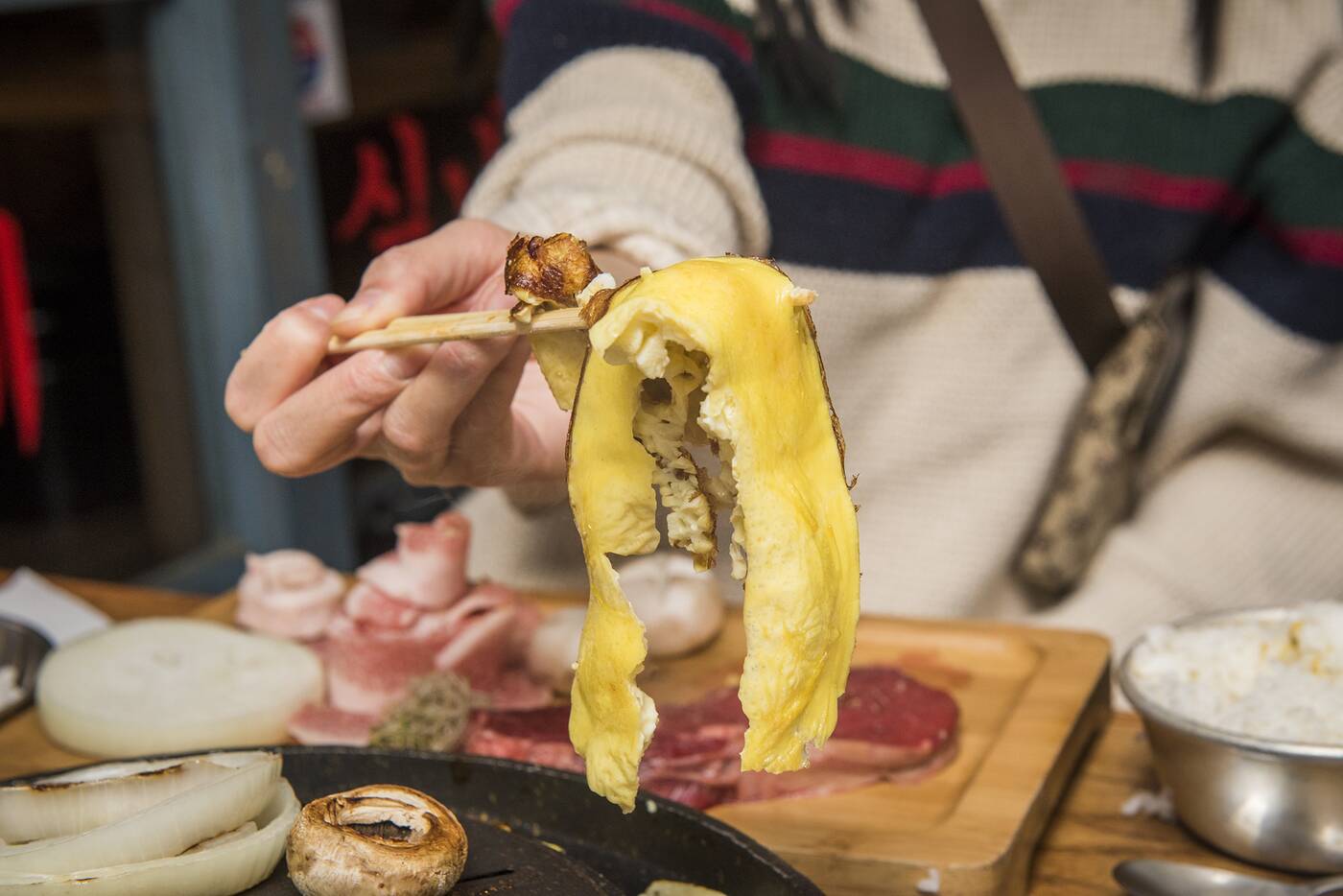 As you grill your meat, these items will heat up and cook themselves, making for great finger food and tasty condiments. 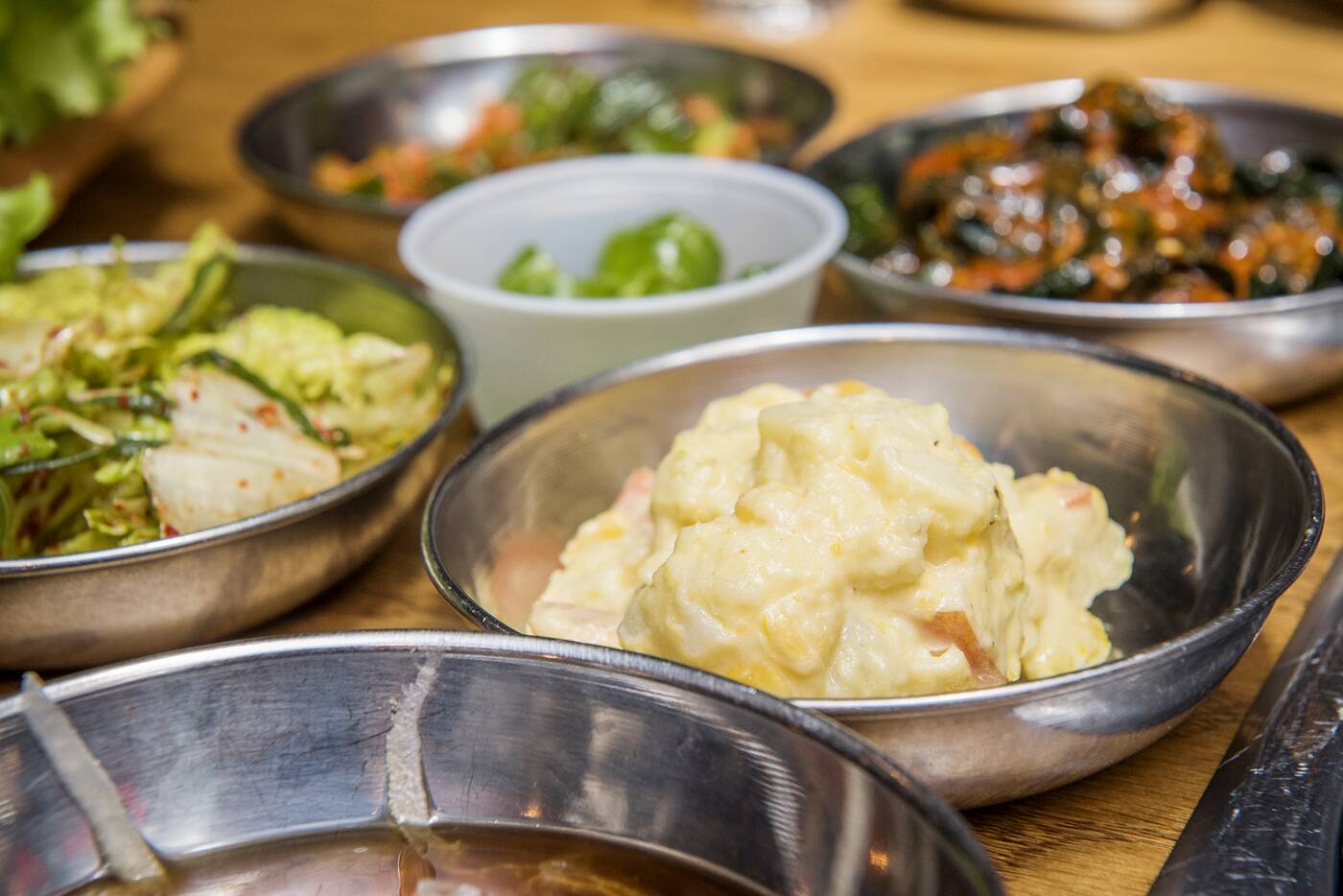 For appetizers, the menu includes classic complimentary banchan like spiced cucumber and seaweed that are refillable. The bowl of soy sauce provided is a mix of sugar, lemon, jalapeno, and vinegar boiled together to create a unique flavour. 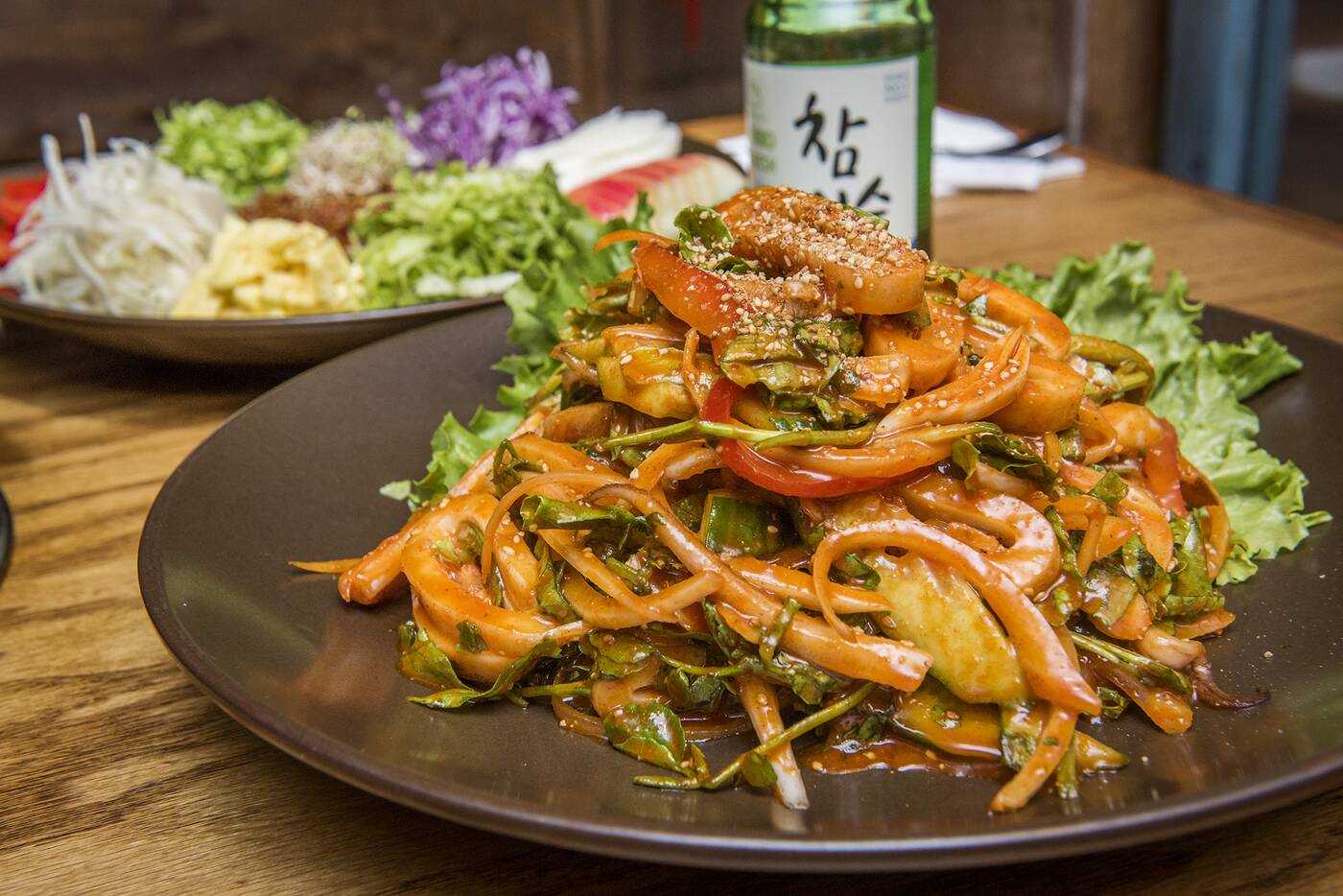 A platter of spicy seasoned squid ($16.99) is more than enough to share between three to four people and is served with veggies like red pepper and sprinkled with sesame seeds. They also have the same dish with pork for $27.99. 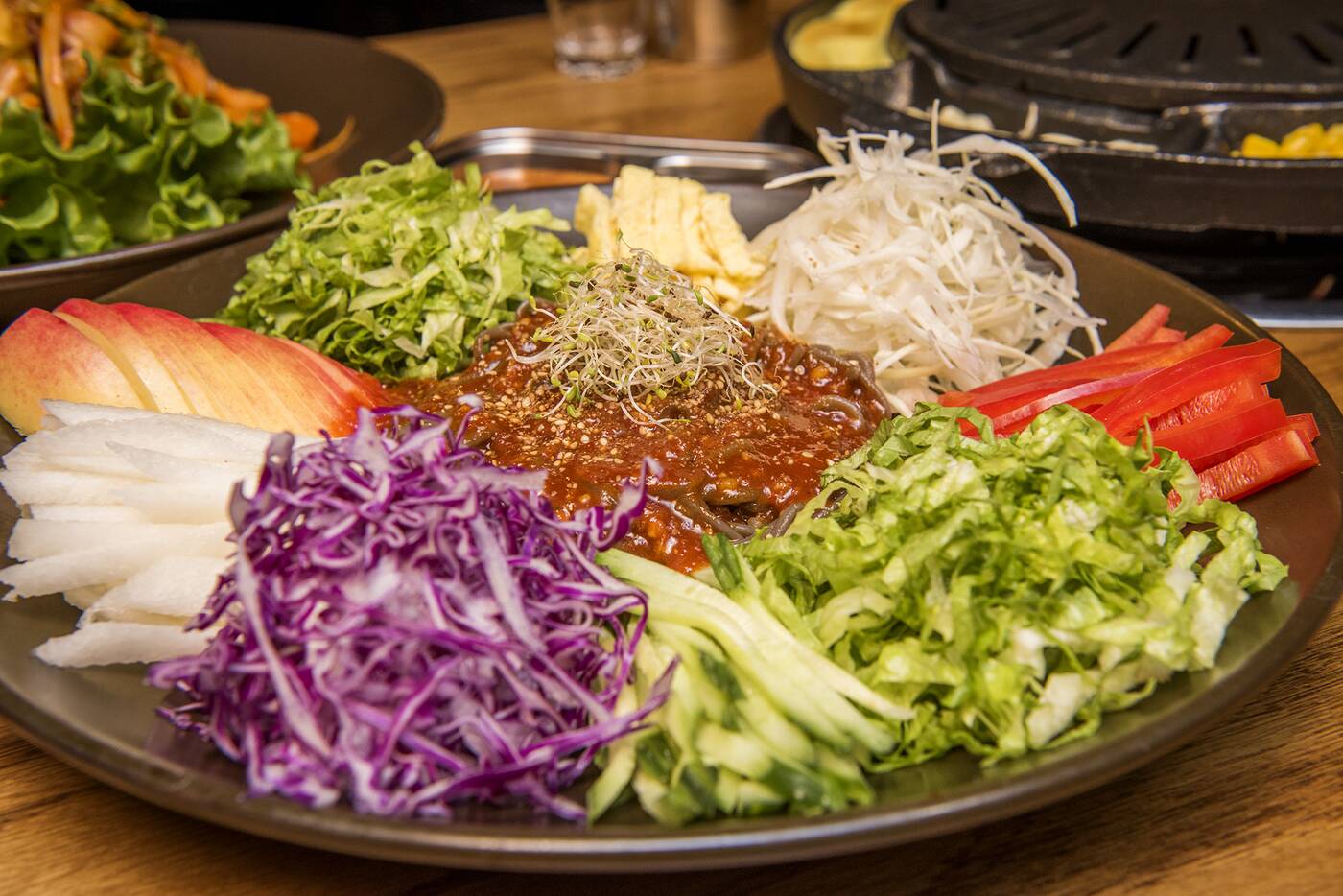 The spicy cold noodles ($19.99 for a large) are doused in gojuchang, the popular Korean red sauce. It has a little kick but is mostly sweet; mixed with red apple, egg, cabbage and peppers, the noodles have a nice chewy texture. 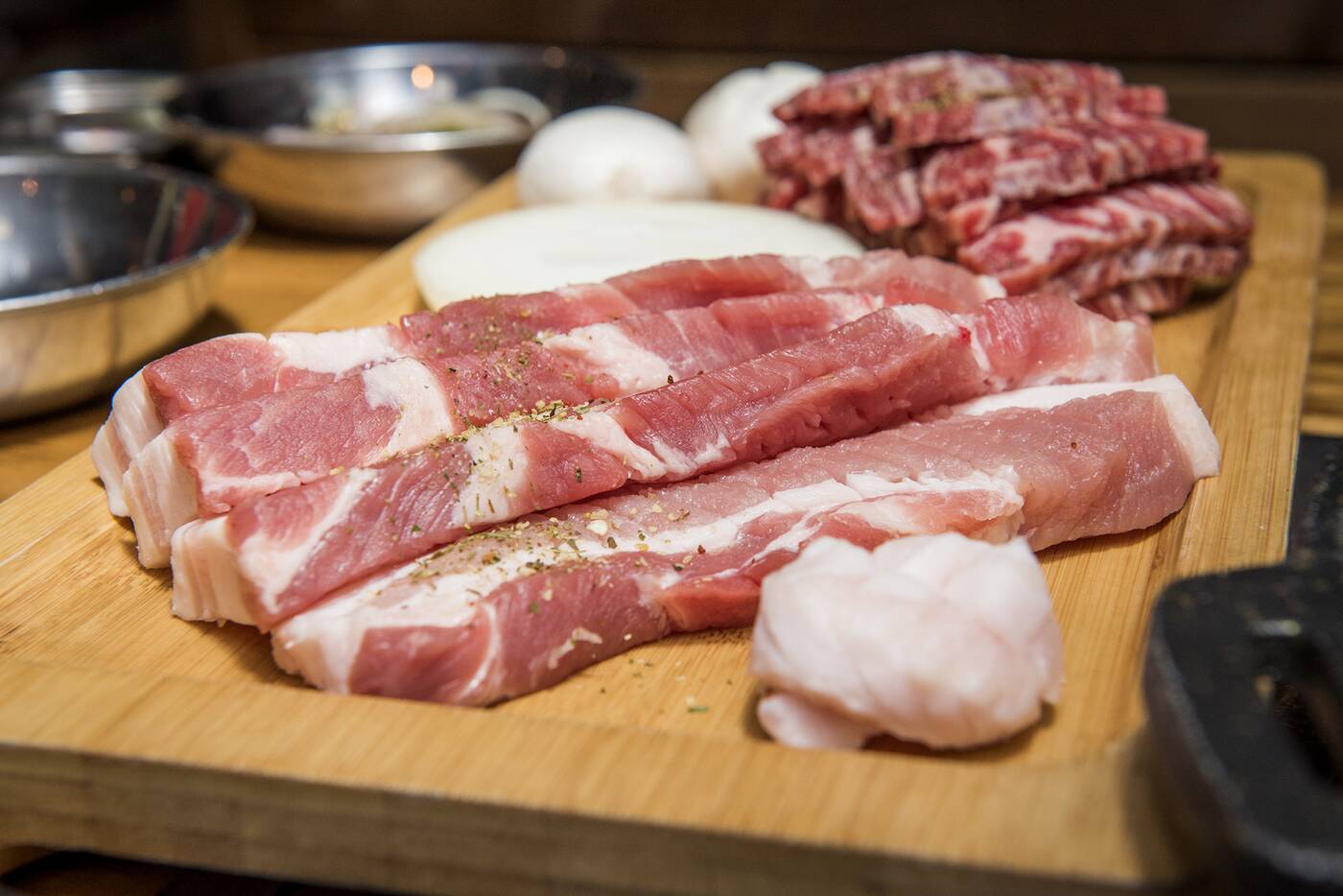 Served on wooden boards, the meat is prepared with raw onions and mushrooms on the side. The cuts of pork belly ($15.99) are juicy and fatty, prepared with a little Greek seasoning on top. 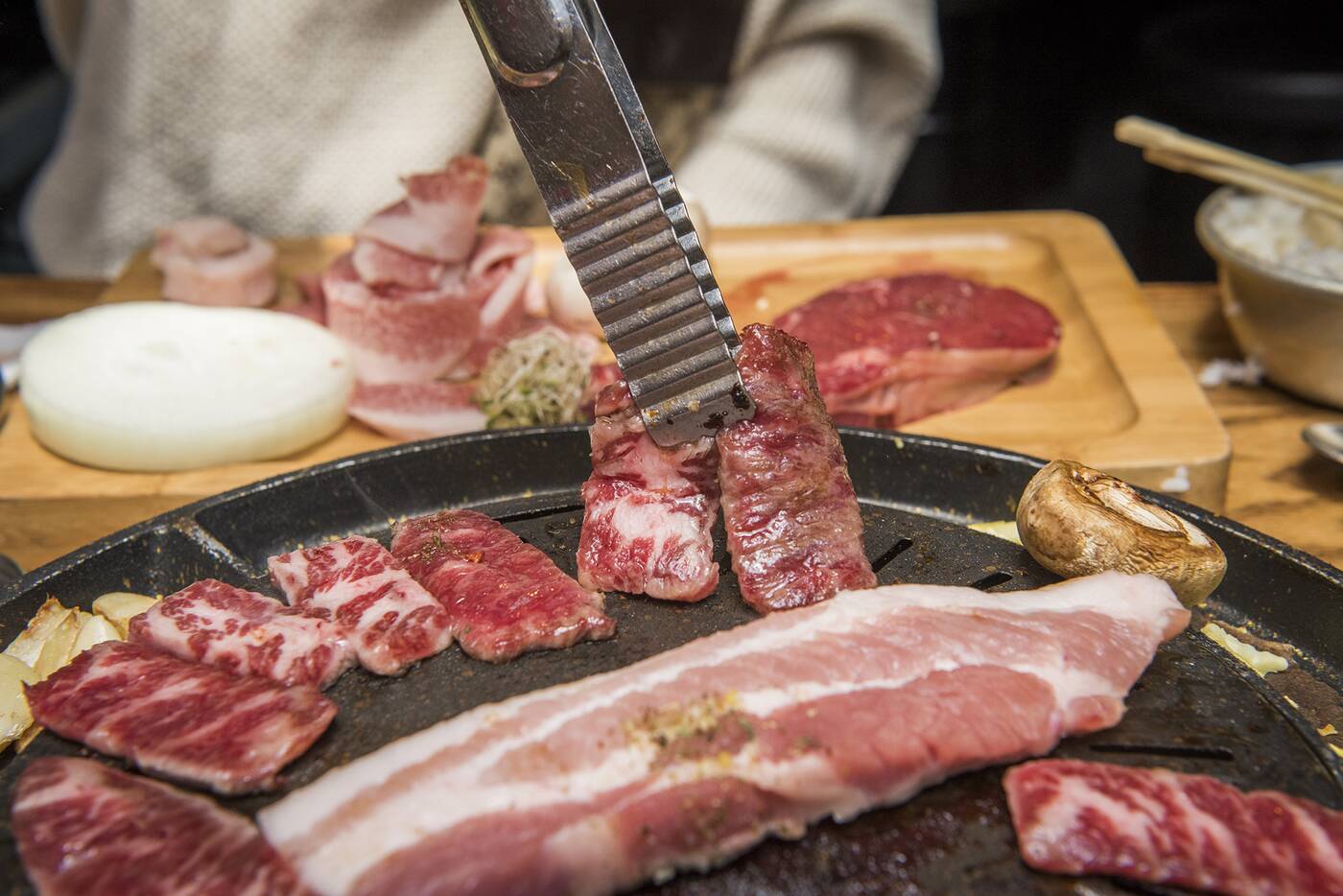 The boneless short ribs ($25.99) are cut into small rectangles, making them easy to cook. Beware of fast turnover times – you don't want to overcook these guys. 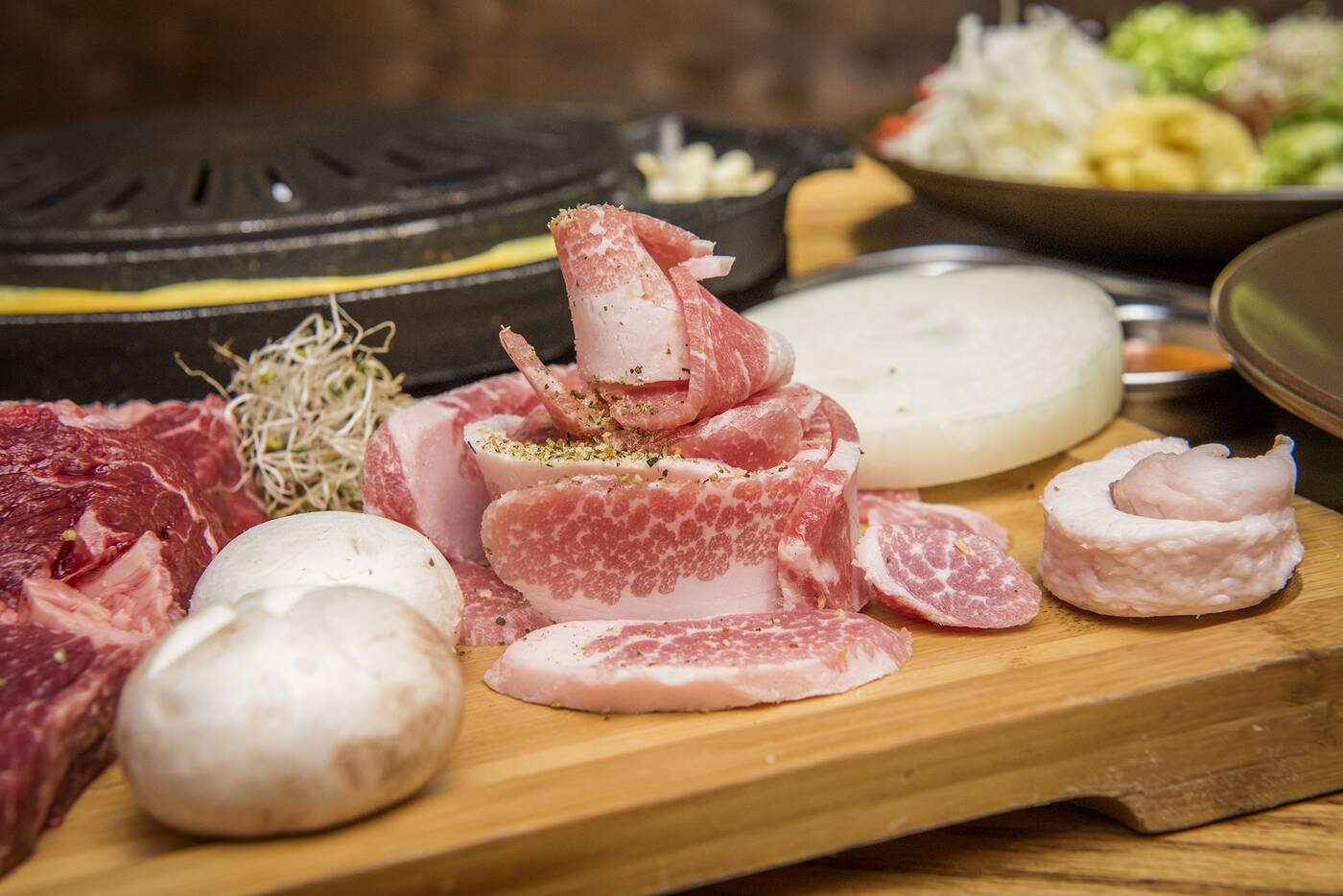 Slices of pork false lean ($16.99) are nicely presented, assembled in a rose-like shape. Extremely fatty, these pieces can be left on the grill longer to achieve a crispy texture. 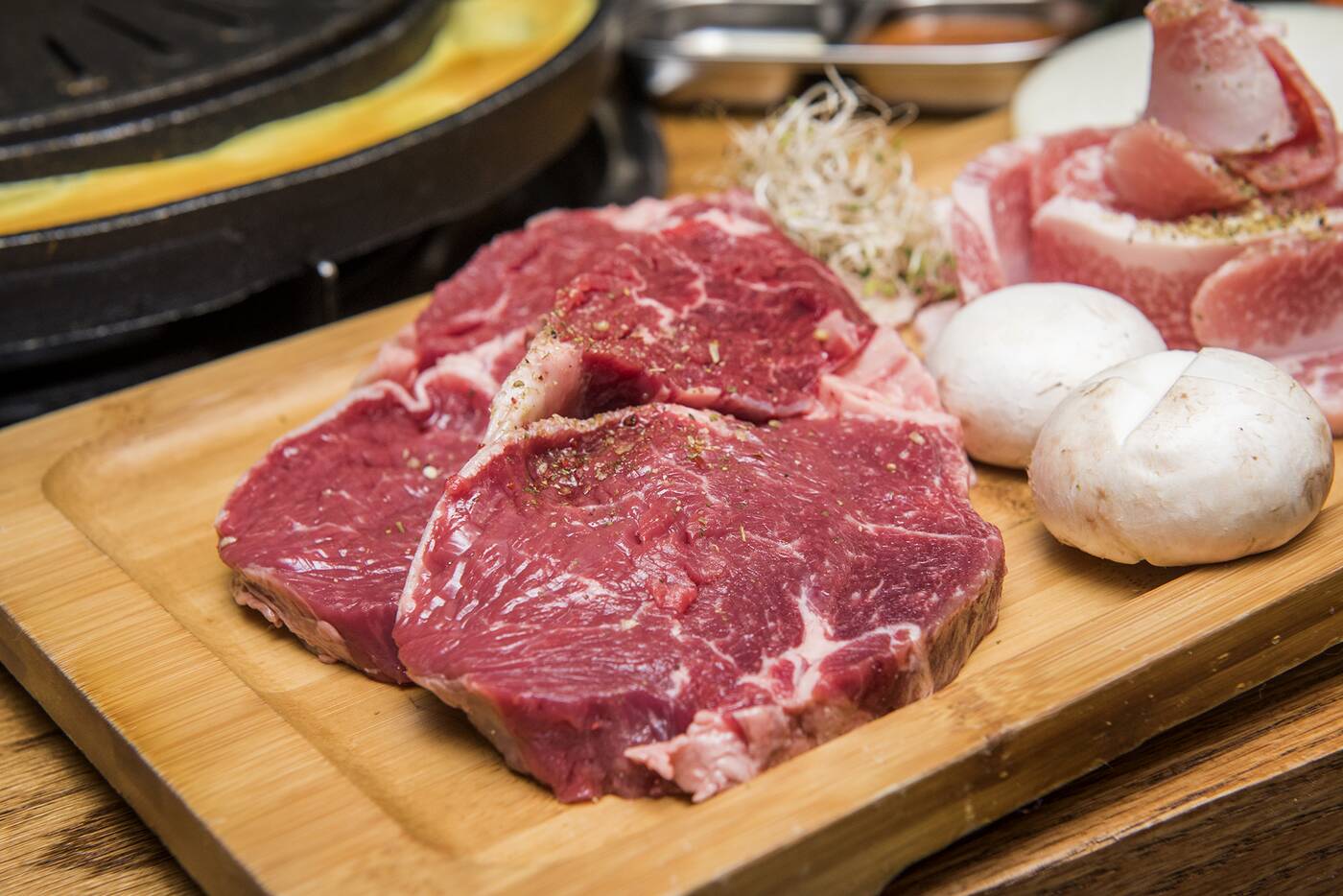 Big chunks of beef rib eye ($18.99) take the longest to cook but are so worth the wait. 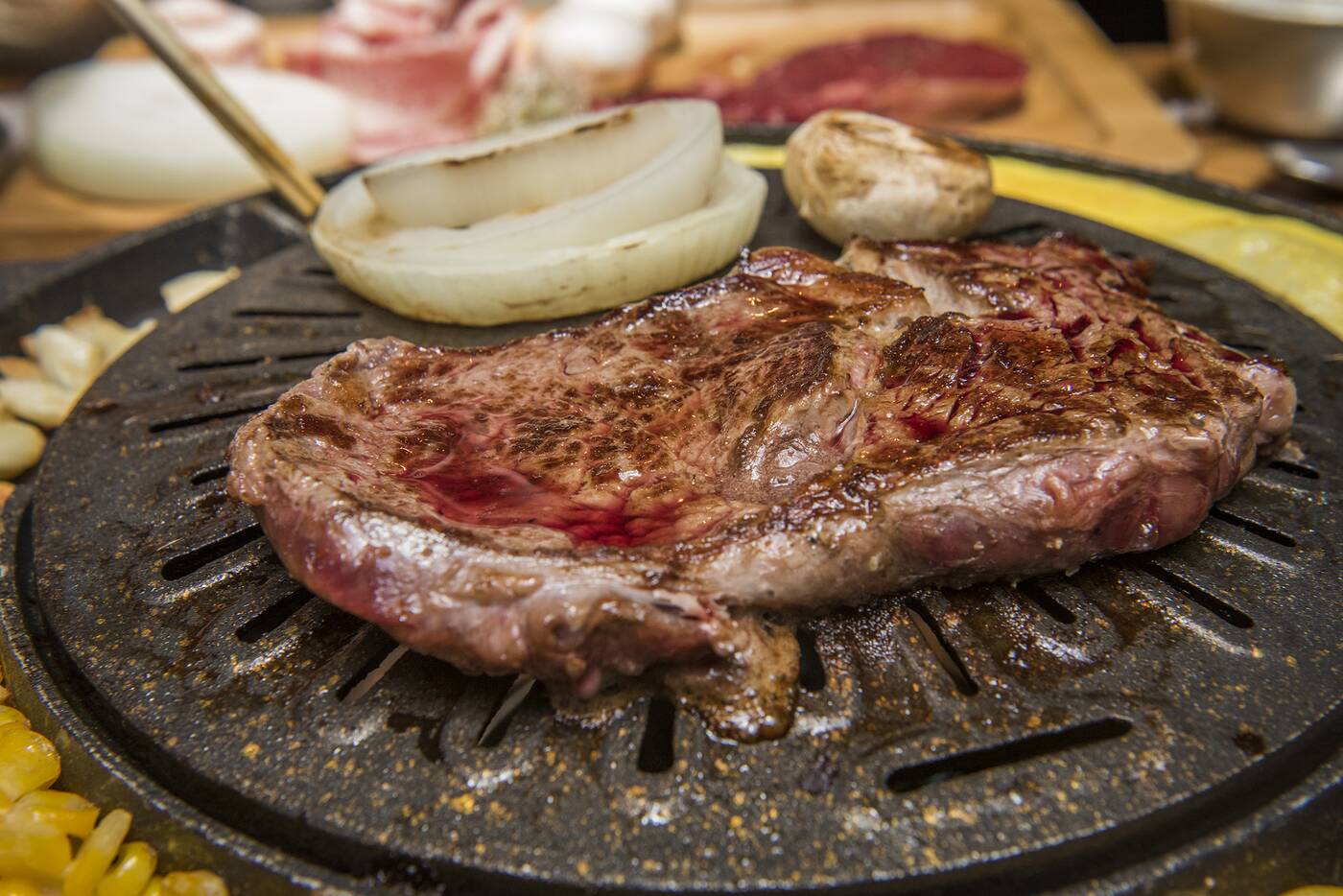 Nearly taking up the whole grill, these big slices go well with cooked rings of raw onion and mushrooms. 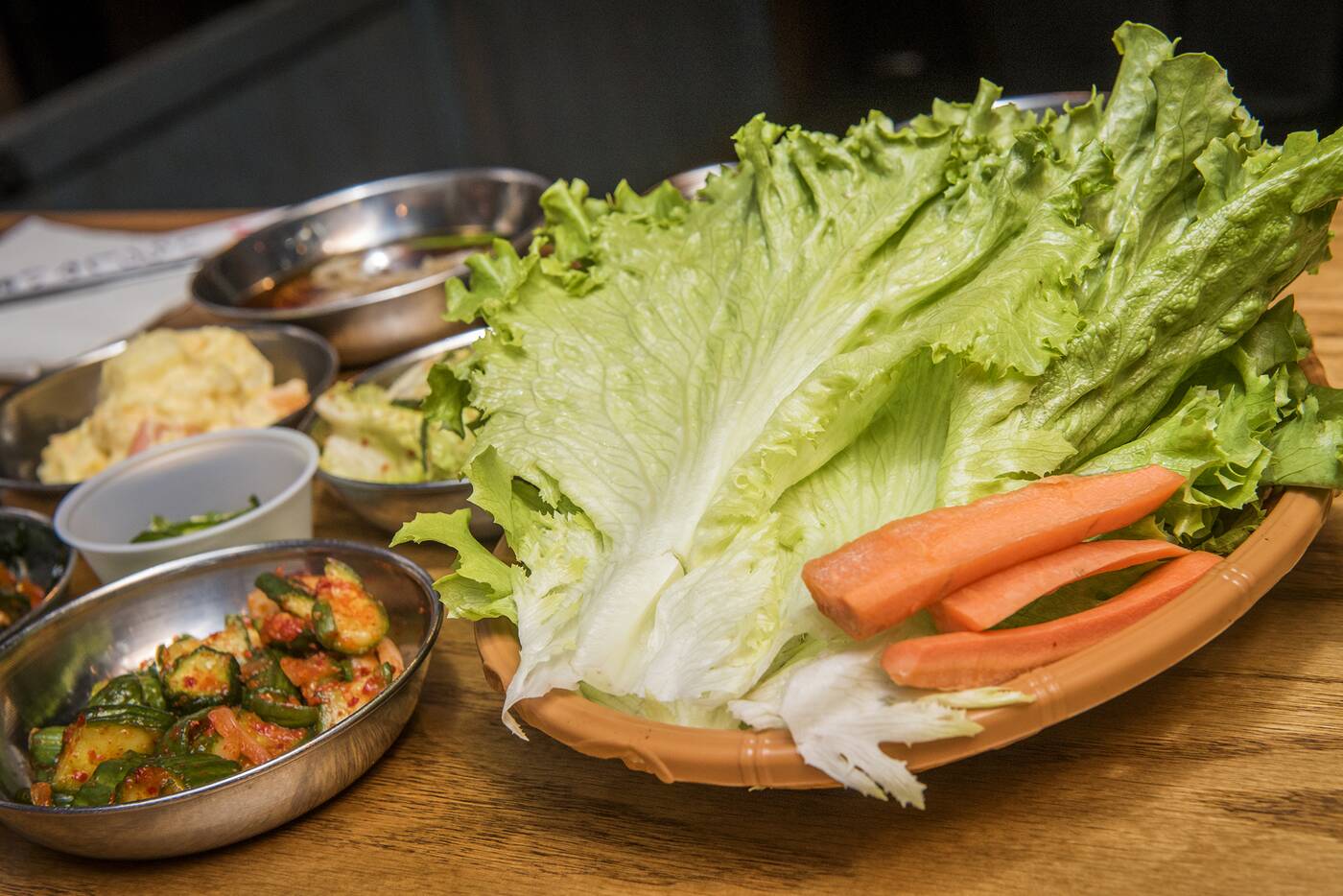 Use the pair of scissors provided and cut up some smaller pieces of meat to put in a raw piece of lettuce. Add rice and some sauce to make a tasty wrap. 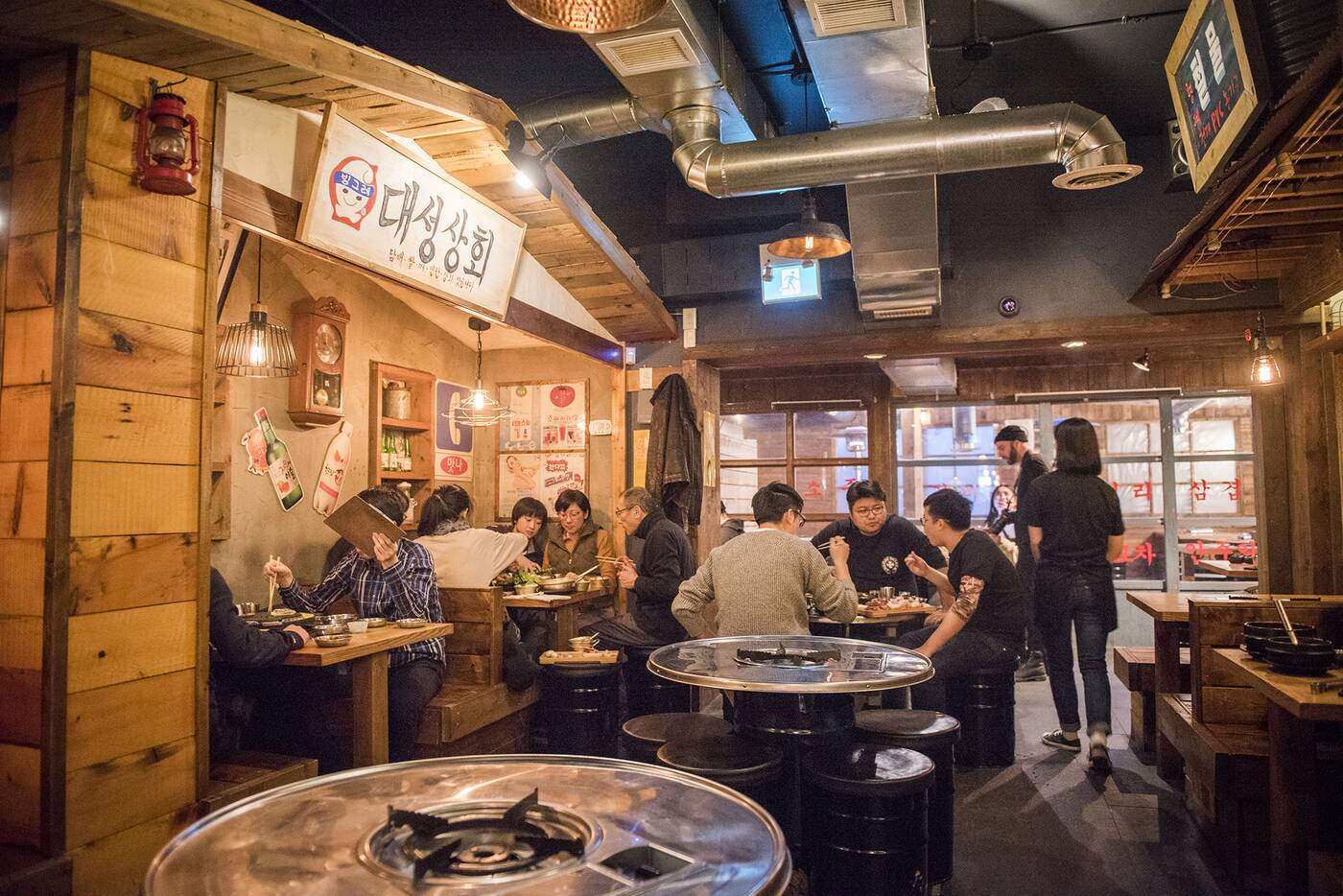 The drink menu here is small but includes a pretty good selection of soju, makgulli (a sweet rice alcohol) and beer. 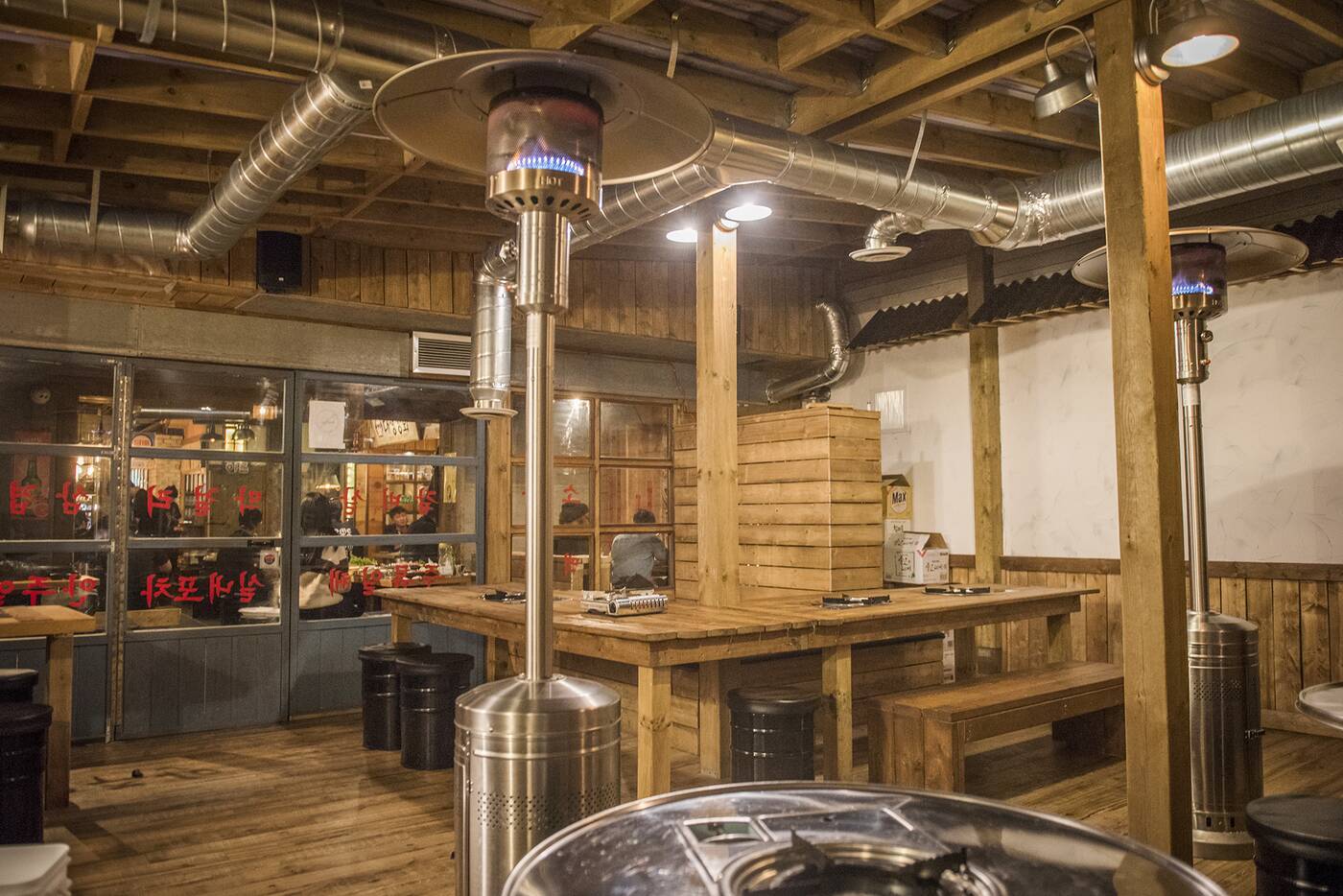 In warmer weather, head to the patio in the back for a spacious retreat, although it's also open during winter months as it's covered with plenty of heating. 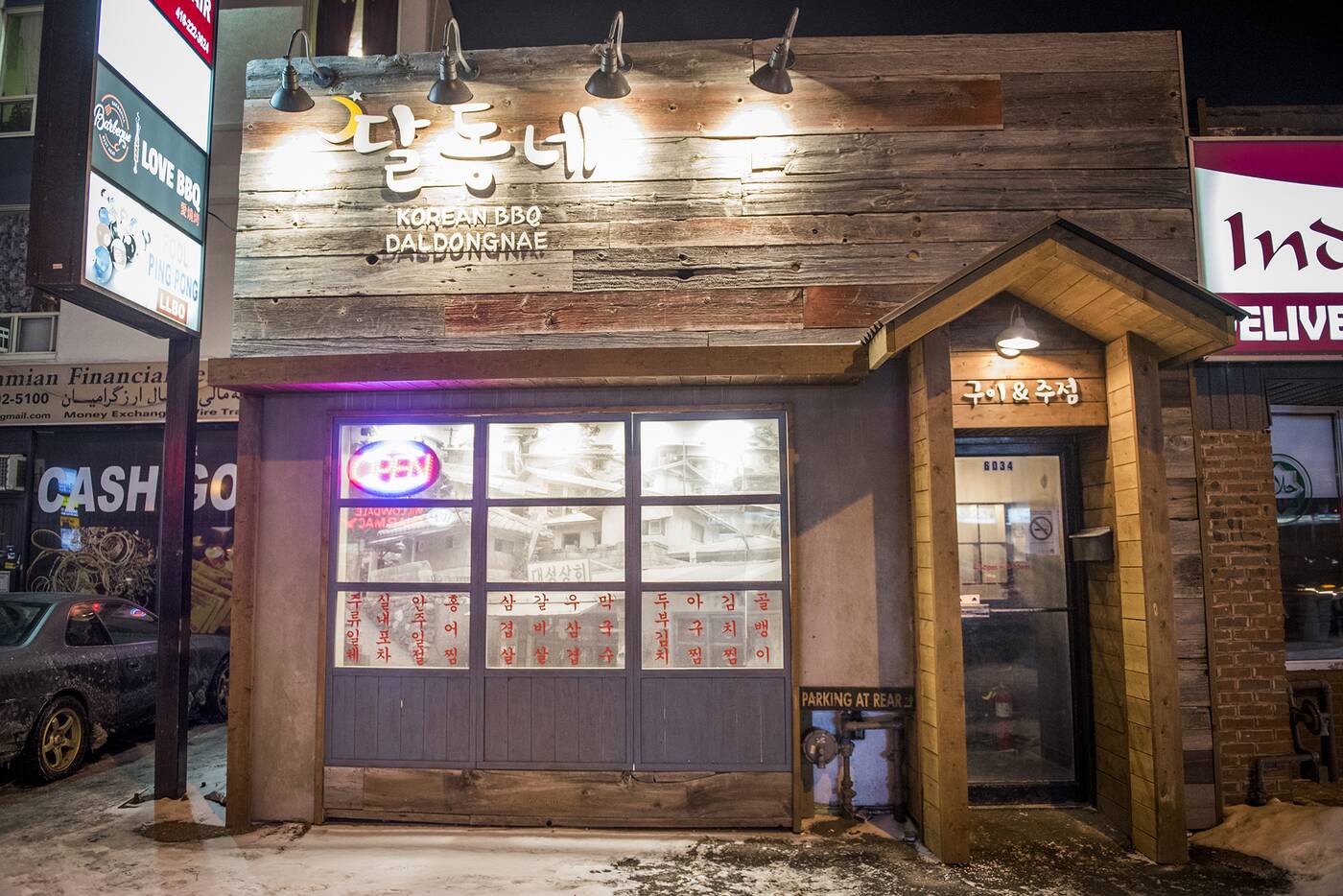 The Best Korean BBQ in Toronto