A guide to Polish Toronto

I have Polish in my blood, but little on my mind. A couple of generations in Toronto might do that. But there are a few areas in the city where Polish culture is fresh and thriving so my friend Dennis and I sent out to explore them. Dennis' family moved to Canada in the early 1990's, and, as is common with many immigrant families, they quickly found Toronto's spots to enjoy old customs in their new home. I met Dennis at the foot of Roncesvalles and Queen to begin our unofficial Polish Toronto tour.

"There have been several waves of Polish immigration to Toronto," Dennis says, "and Roncesvalles was around the 1940s, 1950."

The Polish community is certainly evident in Roncesvalles, with Polish-language signs, specialty stores, and the Polish Credit Union on the block. And yes, Dennis confirms, that is a statue of John Paul II right outside the building. Roncesvalles also hosts an annual Polish street festival each year, which features Polish food, music, and live entertainment. And speaking of food, Dennis takes me to his pick of Polish restaurants on Roncesvalles. 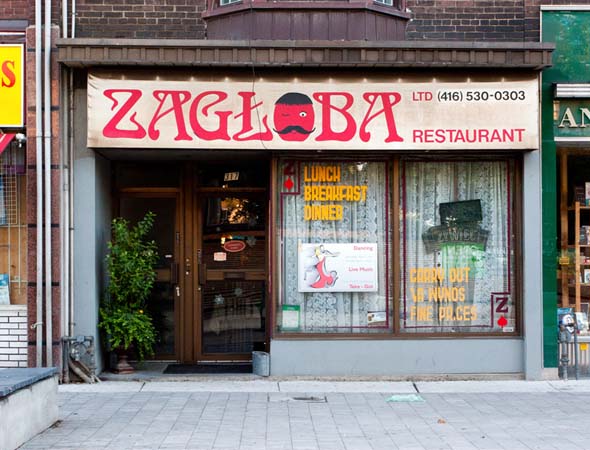 While Cafe Polonez is perhaps better known, Zagloba is Dennis's favourite place to eat in the area. Inside: doily curtains, white tablecloths, a mirrored wall, and furniture that has probably seen decades since its first construction--yup, this is definitely your babcia's place. "I'd say this place has the best perogies in the city," Dennis says. Bold statement, but he sticks by it. "The woman who owns it is an old-school cook. She's been making food all her life." All sorts of perogies and weekend dancing seem to be Zagloba's main attractions.

We move onto bakeries, and Dennis leads me to one he calls "Polish, but Canadian-ized." 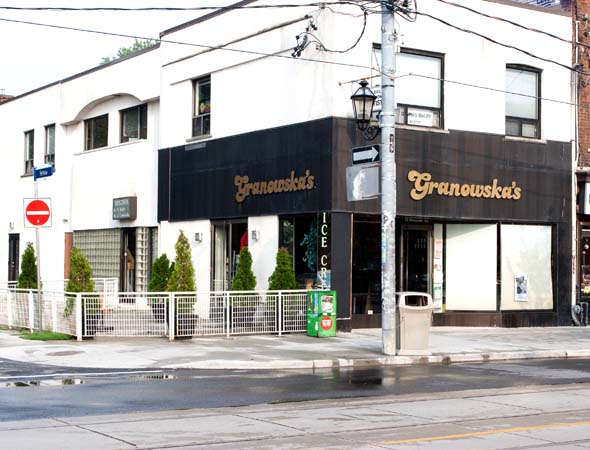 Granowska's has lots of Polish favourites, including PÄ…czki (a glazed donut, usually with a custard or fruit filling), Chrusty (fried pastry covered in icing sugar), and homemade perogies. Though the Polish influence is undeniable (many Polish tabloid rags are proudly displayed behind the cash), Granowska's also offers eats from other regions, including gelato in the summertime and panini all year round. In any case, the hybrid must be working since the shop is poised to celebrate its 40th year on Roncesvalles next year.

Though Granowska's did have some retail food items, our next stop on Roncy was a Polish grocery store through and through. 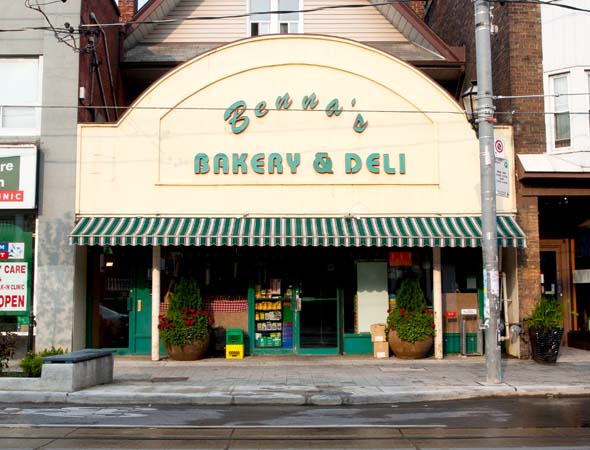 Benna's has many of the same items you'll find at your local supermarket, but these are the Polish versions--made in Poland and shipped over. That means Nutella in a glass jar, Knorr soups in Polish packaging, and Hellman's ketchup with the word "pomidorowy" on the label. Benna's also sells uniquely Polish items including Budyn custard pudding and Mokate instant cappuccino, which Dennis, with a smile, says is his "crack." Whatever works, right? The shop also has a pastry counter, a meat counter, and an obscene number of woven baskets hanging from its ceiling.

Next, Dennis and I head to Bloor West, where we head into Astra Catering and Deli, a favourite place for Dennis to pop in and pick up a quick, complete meal. 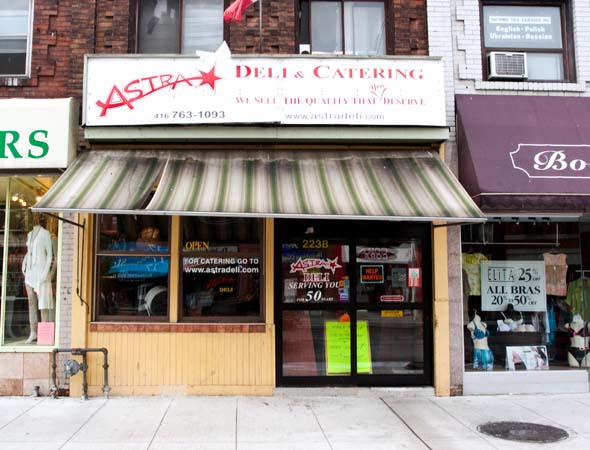 Astra has an old-school home barbeque outside its front door, the same type of barbeque I've been begging my parents to get rid of for the past five years. But it's there outside Astra every summer, according to Dennis, ready to prepare sausages and other grilled meats. Inside is a variety of main dishes, drinks, and sides, including cabbage rolls, Polish pancakes, chicken schnitzel, perogies, and more, as well as pickles and fish soaking in buckets of brine. Dennis says a complete meal can be had (or taken away from, since Astra doesn't have seating) for five or six dollars.

And then onto Parkland. 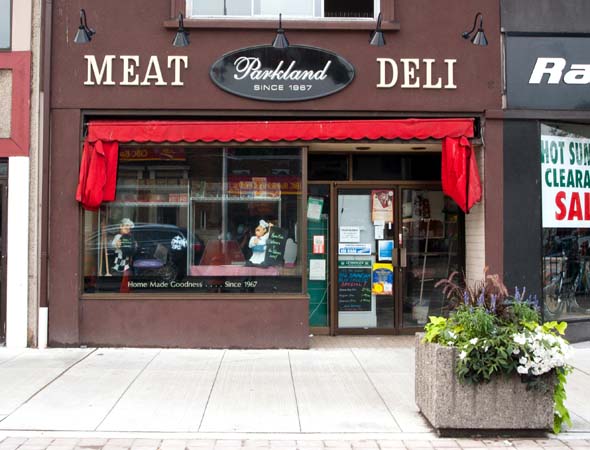 This shop has been around since 1967, offering a mix of Polish and Ukrainian meals and groceries. Most striking in the shop is a gleeful, nearly five-foot plastic Haribo Boy candy display, with an abundance of the originally German sweets protruding from the boy's cut-out plastic stomach. More appetizing is the spread of sausages and meats behind the counter, and Dennis and I pick up a couple of (glass) bottles of Tymbark for the road.

Our next drive is to the Lakeshore, where Dennis and his family first settled when they arrived in Canada. "My memories started here," he says, "There were lots of Polish people here who had just come to Toronto, but they began moving away. It wasn't a great area, so we moved about five or six years later." Dennis says the area is starting to turn around, and we head into Universal Bakery to check out the current state of affairs. 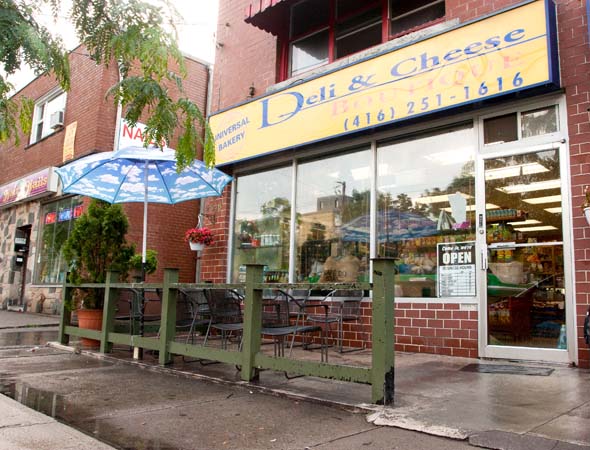 Universal Bakery is renown for its rye, and supplies many of its loaves and baked goods to other shops in the city. It also serves hot perogies for $0.39 a piece, and great Polish cheesecake, according to Dennis. It has both indoor and outdoor seating (patio and umbrellas) and a grocery and meat section where we found the same glass jars of Nutella that kept popping up at various places throughout the day.

Starsky is a Polish and European superstore. "The Polish version of Loblaw's," Dennis says. You would think a bit of character is lost with every extra square foot, but this place seemed to ooze authenticity, and look pretty good too. Starsky's has everything--fresh produce, fresh meat, fresh cheese, baked goods, groceries, and personal items. And no surprise, the space is huge. But everything had its place.

We picked up some PÄ…czki, which I finally got to sample, and checked out the bulk candies which were all wrapped and displayed in clean, open containers. Among the cheese offerings were "Beer Cheese" and "Cheese with Malt Whiskey," the hot table had lots of perogies, chicken, and cabbage rolls, and the refrigerated section endlessly taunted me with its buckets of dark green pickles. But perhaps most seductive was the Polish Playboy in the secluded magazine section by the front entrance.

Please note: this post isn't meant to serve as a comprehensive directory of Polish businesses in Toronto. There are plenty more than listed here but these are some of Dennis' favourites.