The St. James Cathedral on the Northeast corner of King and Church is among the oldest churches in the city. These days it's easy to walk by with your head down and totally miss this incredible building, but when it was built in 1853 it was among the biggest in the city.

Across the street from the church is a building no less remarkable--well okay, it's a little less remarkable, but it's about as exciting a neighbour as St James could ask for.

Claudio Aprile's Origin is a full sensory experience that, from the patio, allows for a full on view of the building on the other side of the street. Of course, chances are you'll be too wrapped up in what's going in your mouth, but it's there if you need it.

The space is divided into a dining area and a lounge area (both are non smoking), of which the latter has deep, comfortable couches perfect for an afternoon in the sun.

Who goes there?
Young Bay Street bankers and the people they're trying to impress, fashionable foodies. Basically, people with money, or people who are totally irresponsible with their money, but would like to impress you with the bit they have.

Regardless, this place touts itself as casual dining and I suppose in comparison to say--Colborne Lane, it is. But this is definitely an environment that screams "young professional." 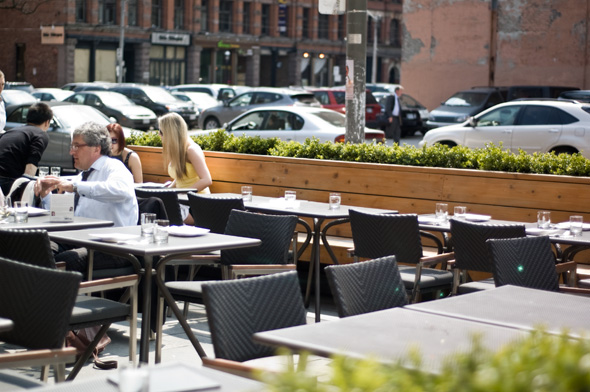 Grub and Libations
This place makes fabulous cocktails, the Bramblish is the perfect, light, refreshing cocktail for a sunny patio session and the food ain't to shabby either.

But what's a suntan, care of the Origin patio, going to cost? Well that varies a great deal. The menu ranges from the

Odds of scoring (a seat)
Timing is everything. I've been by a number of times and with plenty of space available, but during peak hours (think 6-9) it does often fill up. The best time to visit, if possible, is on a weekday. Origin opens Monday - Friday at noon and while they do get a bit of a lunch rush, you'll usually have no trouble snagging a seat.

A view to a ...
One of the special secrets of the origin patio is that it gives you a chance to take a good long look at that magnificent cathedral. But if staring at a church gives you the yawns then take full advantage of the see and be seen-ness of this place. Sprawl in the comfy couches and watch all the people passing by who aren't sipping on a South o' Manhattan and chewing on perhaps the best maki roll in the city. Suckers. 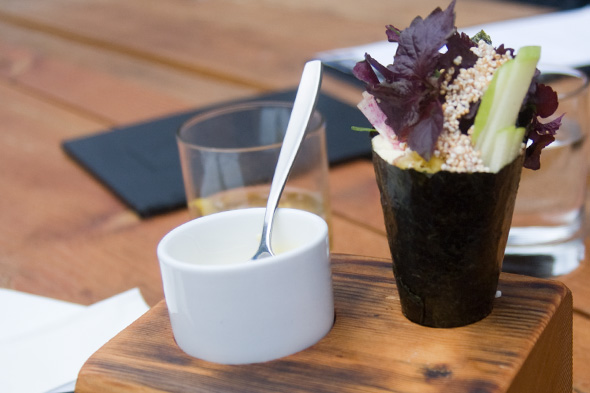 SPF Recommended
Scratch that, encouraged. But it's a small price to pay for the privilege of sitting on this patio. This place is actually one of the best patios in the city, I'm convinced it was the reason Aprile decided to take the building in the first place. It's a huge west facing area with nothing between you and the open air--it's glorious.

Overall impressions
This is a place best enjoyed on an evening or an afternoon with a few good friends. It's a place meant for sharing, drinking and good conversation. Order a few cocktails and a couple of dishes--not necessarily because you're hungry and need to eat, but out of curiosity, just to sample. Just keep in mind that you don't need to try everything, because you'll want to, and chances are that before long there will be plates every where, but don't worry, just tell yourself "I've earned it" and everything will be okay.