Jamie Oliver came to Toronto on Thursday as part of the The Art of Cooking chef speaker series. It coincided with the kick-off of the Gourmet Food and Wine Expo. Over 3,000 people gathered in the Metro Toronto Convention Centre for an intimate evening of Q&A with one of the world's most renowned chefs.

Oliver catapulted to household-name status after the success of his first show, BBC's The Naked Chef. Since then, he has hosted several spin-off programs (airing in over 100 countries) and has published several bestselling cookbooks. His newest show, Jamie's American Road Trip, came to the Food Network in Canada this month. 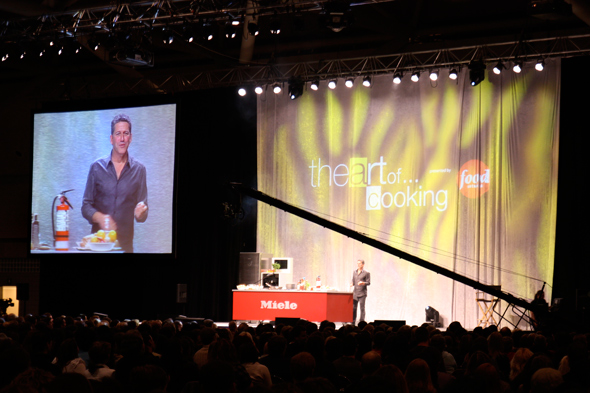 Bob Blumer, host of another Food Network show, Glutton For Punishment, opened the show. Maybe I don't attend enough of these speaker events, but his delivery was a bit too Tony Robbins meets Def Comedy Jam. But not really funny or motivating. And, his 30-minute set was really an anecdotal plug for his program. Frankly, the entire event felt like a giant Food Network ad.

A quick dinner demo was entertaining, though. Blumer proved, through a cook-off with an audience volunteer, that a healthy supper can be prepared in the same amount of time spent opening and heating a can of Spaghetti-Os. Enlightening, but really worth the $90-a-head ticket price? 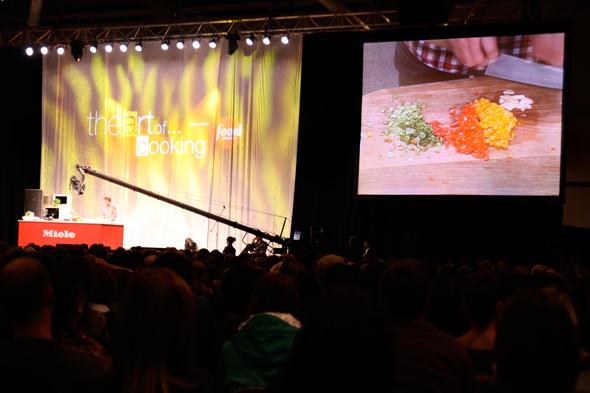 Then Jamie Oliver took the stage. I wasn't necessarily a fan going in, but there really is something pretty charming about him. The format was informal - Blumer read pre-prepared audience questions and Oliver chatted off-the-cuff about everything from Beaver Tails to hot chilies to underwear. His reference to the "large shaft" of a knife had the crowd in pre-pubescent giggles. "Welcome to Canada," he shrugged. Of course it was an ice-breaker for yet more suggestive topics. I suppose he did make his fame as "The Naked Chef", so I should have expected it.

How have people with real jobs managed to attain celebrity status? When did this happen? Growing up, the only people inducing screaming ovations were athletes and performers. Since the advent of reality TV and specialty networks, "real folks" are getting a taste of fame. It's weird, but I see the appeal. They're relatable. Chefs and moms and surgeons are getting real props, and it's a good thing. Oliver is, aside from being a mega-star, just a regular bloke who loves to cook and spend time with his wife and gaggle of kids (complete with proud-dad photos on his iPhone).

His talk was engaging, educational, and really funny. Some too-quick food demos provided a break from the Q&A. But of course, you'll have to buy the book to actually replicate them at home. Plug, plug, plug. I suppose the real foodies/fans didn't notice or care. I'll admit, though, that when I got over the plugging, I had a laugh.