It's done. 20 Poutines. 20 days. Finished....An odyssey in French Canadian food by way of the streets of Toronto. So what can an English-speaking guy from Southern Ontario possibly know about poutine? Well I've learned quite a few things over the course of the past three weeks. Becoming an authority on poutine was never something I envisioned for myself, and revealing it to strangers remains an embarrassing proposition, but the experience was certainly interesting.

Poutine may have been born in provincial Quebec, but over the past fifty-some odd years, it has been embraced by the country at large, becoming our de facto national dish and as such, the fatty fuel in many culinary arguments.

Traditionally the dish is comprised of french fries topped with a brown gravy and fresh cheese curds. For some, any deviation from this recipe is sacrilege and deserving of mutiny, but more and more, you'll find bold fry cooks looking beyond the curd for inspiration. A whole industry of poutine production has emerged in this city over the course of the past few years and as a result, the traditional definition begs for expansion.

So, as one commenter put it, there is "Traditional" and "Non-Traditional" poutine, and perhaps in terms of scoring, it might have been better to make this distinction up front. However, as many have pointed out, the scores are kind of inconsequential.

The problem with scoring a competition like this is that each poutine must be compared to all the others, but only the last poutine on the list gets the luxury of that comparison. An excellent poutine early in the conquest might have been scored too low, or a terrible one might have scored too high and as a result we get a bottleneck of those scored in the middle.

But first a word on my health. A poutine a day is not a diet anyone should aspire to, but it's also not quite as bad as it sounds. For one, I found myself eating waaaaay more fruit than I normally would in an attempt to counteract the effects of the poutine and prevent any clogging in my pipes.

I've definitely put on weight. I can feel it, but I chose not to weigh myself before the experiment so I can't say exactly how much. Despite a daily bike ride of at least 15 kilometres, my body is softer than it used to be and my energy levels have gone down. It's not a lifestyle I could maintain for much longer and toward the end I was beginning to dread those daily meals.

I should note though, one of - if not the - best I've tried over the past few weeks wasn't actually part of the contest at all.

One of the side effects of being involved in something like this is people always want to talk poutine, something I had never actually done before. I was surprised to find that everyone has their place that they're certain will topple the scales and change your life.

So when Clint Robinson - a personal friend, and owner and operator of the now defunct back alley event space Unit C - made the outlandish claim that he actually made the best poutine in the city, I felt compelled to call him out on what I could only assume was unwarranted arrogance.

So later that week I met him at his loft for the poutine tasting. Dubbed "The Unlicensed Poutine" in honour of his former off-Ossington digs, it was a truly impressive showing. 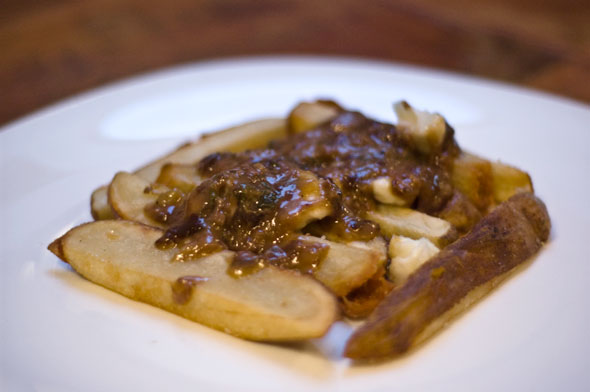 By far the most decadent of the bunch this was true high-end poutine. The potatoes were first parboiled and then double fried in a blend of duck fat, beef tallow, coconut oil and canola to a perfectly and delicately crisp finish, if cut slightly too thick. They were then topped with a gravy that emerged from a rib-eye that was basically braised until it disintegrated into a dark, complex sauce, and finally garnished with a hand full of goat cheese curds - an addition that allowed the dish to remain both traditional and unique.

So let it be said, a great poutine need not be crafted in Quebec. Sure, the motherland might have set the bar, and it will remain the gold standard by which all others must be compared, but excellent poutine abounds in the city of Toronto. So go forth and explore, and don't concern yourself with culinary purity. Everything evolves, and if a smoked meat poutine is delicious, maybe you just shouldn't waste your time worrying about it's authenticity, maybe you should just enjoy it.