The internet definitely makes for interesting dining companions. Thanks to cyberspace, I recently enjoyed the opportunity to share a meal at an amazing suburban restaurant with a complete stranger.

I've never met Charles Yu before this particular snowy pre-Chinese New Year evening but he's already been one of my food heroes for quite some time. Anonymous and insightful, this local foodie is at the vanguard of the new DIY school of culinary crit (he doesn't have a blog but he definitely has a posse - check Chowhound for the ever-growing list of people who follow his posts), and he's had a more than passing influence on how I eat this town.

Still, kinda like online dating, y'never know how someone'll represent in real life. Is this meal gonna be an ordeal? Will the minutes drag on until the only chomping I'll be doing'll be at the bit to get out?

Charles revealed is actually every bit the gentleman he appears both in his posts and in the flurry of e-mails leading up to our dinner; albeit a bit lankier than you'd assume for someone of his encyclopedic culinary knowledge and well-traveled palate. "I am slowing down a little bit as I get older" he admits, though he still gets out to eat three or four times a week uncovering the best eats that Richmond Hill and Markham have to offer and posting his finds to the Toronto Chowhound Board.

Charles actually knows a lotta folks that cook. Funny thing is, chefs seem to know Charles too. The ones that read the boards know him by name or rep and have even taken suggestions he's made on the board to heart, actually changing menu items or portions at his suggestion. Fact is, Charles combines a wealth of food knowledge and experience with that rarest of qualities for foodie: an even temperament. His praise is generous and thoughtful and his criticism is always tempered so his posts are really difficult to dismiss. He amazes me more than once during the course of dinner talking about how many Chinese cooking techniques can be understood through French ones and vice versa (I'm a food nerd, so I kinda dig that stuff). Plus, dude just loves food. He wants everyone to eat as well as he does. A sprightly 57 years young and, as i mentioned, far leaner than I expected from a foodie of his stature, Charles has been a stalwart on the Toronto Chowhound board for the past ten years and knows all the best places to get the goods; especially those suburban snack peddlers that trace the edges of the city.

During the course of our fantastic supper we talked. Shy, self-effacing demeanor quickly evaporating, he'd light up like a Christmas tree at the mere mention of perfectly barbecued Chinese duck liver or really good yakitori (something we both agree would be a welcome addition to the Toronto dining scene). I picked Charles's brain about everything from selling girls shoes to Mark McEwan (Charles runs a shoe store that specializes in footwear for kids and school uniforms, and Mark was in one day buying some shoes for his girls and they got to know each other then), to how the internet is changing food culture, to what makes Toronto a truly great food town, what he loves to eat and what tastes he's happy to avoid. 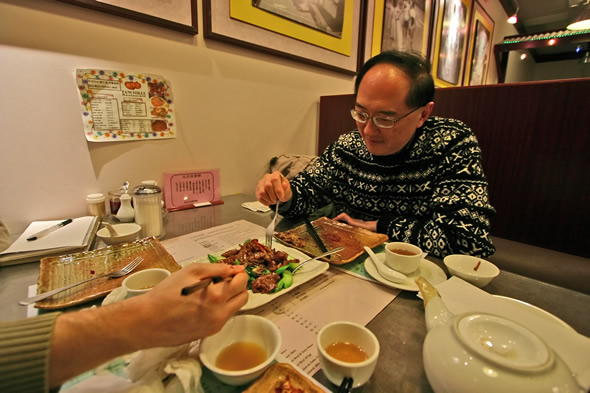 What's your culinary background? Do you have any professional experience or are you just someone passionate about food?
After immigrating to the UK with my family when I was a child, My father ran several Chinese restaurants in Aberystwyth, Wales and I pretty much grew up around the business. While studying at university in London I started cooking for myself and really began to enjoy the whole process. Shopping in London's Chinatown was always a wonderful adventure. After university I worked on a two year assignment for Gulf Oil in Paris and had the good fortune of working for a man who was a proud and unabashed gastronome. Eating meager meals for lunch we'd use practically our whole per Diem for dinner using the little red book (not that one, the Michelin guide) as a checklist. Dinnertime meant picking a place at random, hitting a new restaurant every night and eating incredibly well.

Why did you start posting to Chowhound?
The catalyst that started me off came from the result of a really disappointing meal I had in one of the finest restaurants in town. My friends and I felt ripped off after the meal and decided to search for a medium to vent our displeasure. I Believe we came across Chowhound through a Yahoo or Google search. I made a posting and the rest is history.

What effect do you think message boards and blogs have had on dining in the city?
People are generally better informed about their food options than they ever were and the internet definitely rewards adventurous eaters with access to the best food experiences in this or any other city. It's great if you're a traveler because you no longer have to rely on an out-dated copy of Zagat's or Lonely Planet to find out what's good in a city and you get more of a sense of where locals like to eat. The hype machine occasionally create insane expectations that can turn ugly if those expectations aren't met but on the overall effect is very positive.

What's been your favourite dining experience in the city?
Omakase at Sushi Kaji. Kaji and I have a mutual friend and he knew I was coming so he pulled out all the stops. Including dessert, the Kaji Omakase I had consisted of 18 courses! Almost as many as El Bulli! Ha! Every dish was good to great. The most memorable being the following: 'Fresh Japanese Bonito sashimi marinated in Kaji's 'own brewed yuzu' and 'Creamed corn and crab meat croquette'. It was so crunchy and light and the creamiest I've eaten. One of the entrees, a Japanese/French fusion 'surf and turf' comprising of a veal cutlet, lobster tail and scampi drizzled with some amazing 'unknown' jus reduction. Now, by answering your questions, you are making me hungry again!

How does Toronto's downtown Chinese cuisine compare to that found in the burbs?
IMO, apart from a few exceptions e.g. Lai Wah Heen for high end dim sum/dining, New Sky Garden for passable 'wok-hay' Cantonese, Swatow for good quality soup noodles and maybe Dynasty and Pearl Harbourfront for acceptable dim sum/dining, the overall quality, sophistication and inventiveness of food of down town establishments are no where near their suburban cousins (these are through the eyes and taste buds of Chinese foodies). The presence of more affluent and demanding clientele (from Hong Kong rather than mainland China) up north is the main reason, I think?! Availability is one thing, authenticity and quality is another!

How does Toronto's (anywhere in the GTA) compare to Chinese cuisine in other North American cities?
I think the thing that makes Toronto a world class city to eat Chinese food is the fact that there's so much variety and it's so well executed. We don't' realize how spoiled we are here. Our Chinese chefs can compete with anything in Vancouver, New York, Sydney. Not Just at the high end either. Where we really shine is the mid-level cards, the family restaurants - Richmond Hill and Markham Chinese restaurants offer some of the best food for the money in the world. It's that value for money that you find everywhere in this city. Even at places like George and Splendido you can have a meal that, while it may not compare with dinner at Alinea, The French Laundry, or one of Ramsay's places, you're still going to have an amazing meal that comes really close and pay half the price of those big name restaurants.

Do you have any restaurants you wanna keep to yourself?
No! I love sharing especially when it comes to eating. This way one could open up more avenues to discuss and share notes with others on the yummy food. Its like movies. I hate going alone. Nothing beats sharing viewpoints with someone who also saw the movie. (Note: Charles often arranges "Chowmeets" through the message board where people get together to try some of the best food in Richmond Hill and Markham if any blogTO reader is interested).

Do you even read food reviews anymore?
I still read Chatto and Kates. The problem with these reviewers is that most of the seasoned chefs in the city know them on site and will make the extra effort to execute their cuisine to the best of their abilities to get a good review which maybe isn't an accurate representation of the cuisine on an average night.

What would you choose as your last meal on Earth?
A piece of nicely braised four head Aomori Abalone (Note: prized for its size and rarity, this kind of abalone fetches thousands of dollars a pound).

Is there anything you won't eat?
Hmmm... probably balut - I find the whole idea of it rather unappealing. 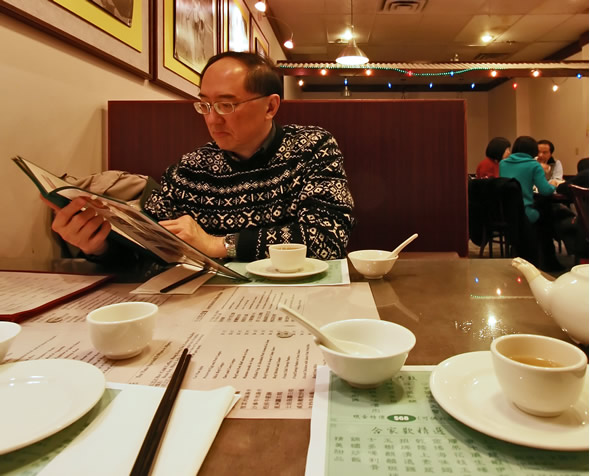 As I briefly contemplate the last time I ate balut and mull over how to approach exposing my host to a new taste experience for a change rather than the other way around, Charles gives a wry smile as our waitress glides away gracefully from the table into an empty restaurant. The spell cast by playfully quivering cubes of pale, coconut custard we've been offered for desert is momentarily broken as Charles informs us that according to some, we eat desert because having something sweet triggers a reaction in the brain letting the body know it's time to stop eating because the meal is over. I find the news bittersweet since this has been a meal that I'd enjoy a little bit more of as much for the company as for the food.