Christmas lights displays at homes in and around Toronto are so extra this year. From neighbourhoods lined with giant inflatables to dazzling light displays that dance to music, some of these would make even Clark Griswold blush.

Here are some of the most elaborate and magically-decorated houses in and around Toronto this year.

After a brief hiatus, the epic Christmas lights display at 6 Somerset Ave is back in support of Make-A-Wish Foundation. Be sure to walk along their driveway and scope out all the ornate details, from Santa's sleigh to the glass-enclosed nativity scene. 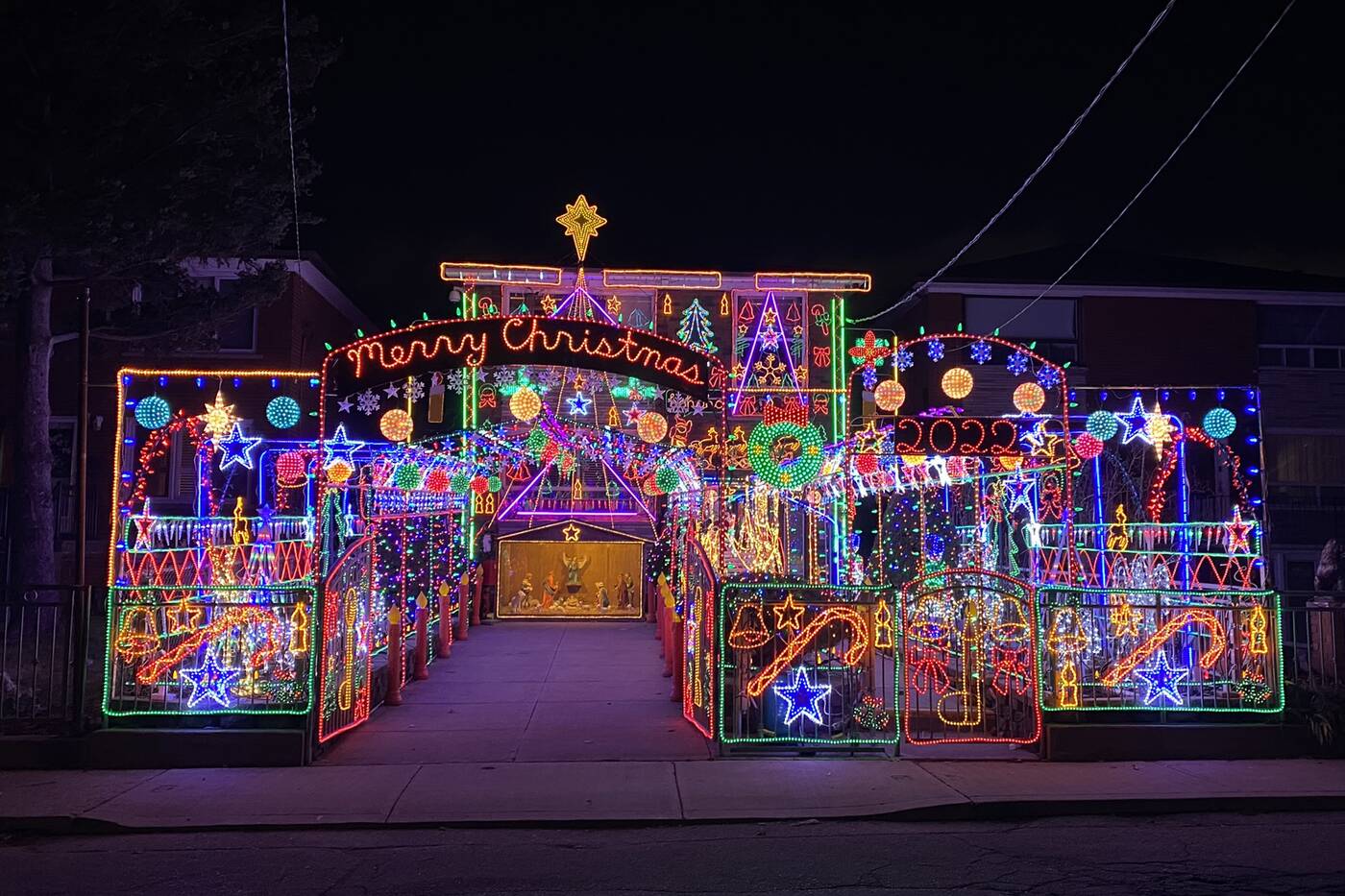 The dazzling lights at 6 Somerset Avenue are back for 2022. Photo by Meg Cossmann

The D'Elia family usually goes all out with their holiday decor, and this Christmas is no exception. Twinkling lawn ornaments range from an illuminated flying pig to acrobatic snowmen, to everything you could imagine in between. 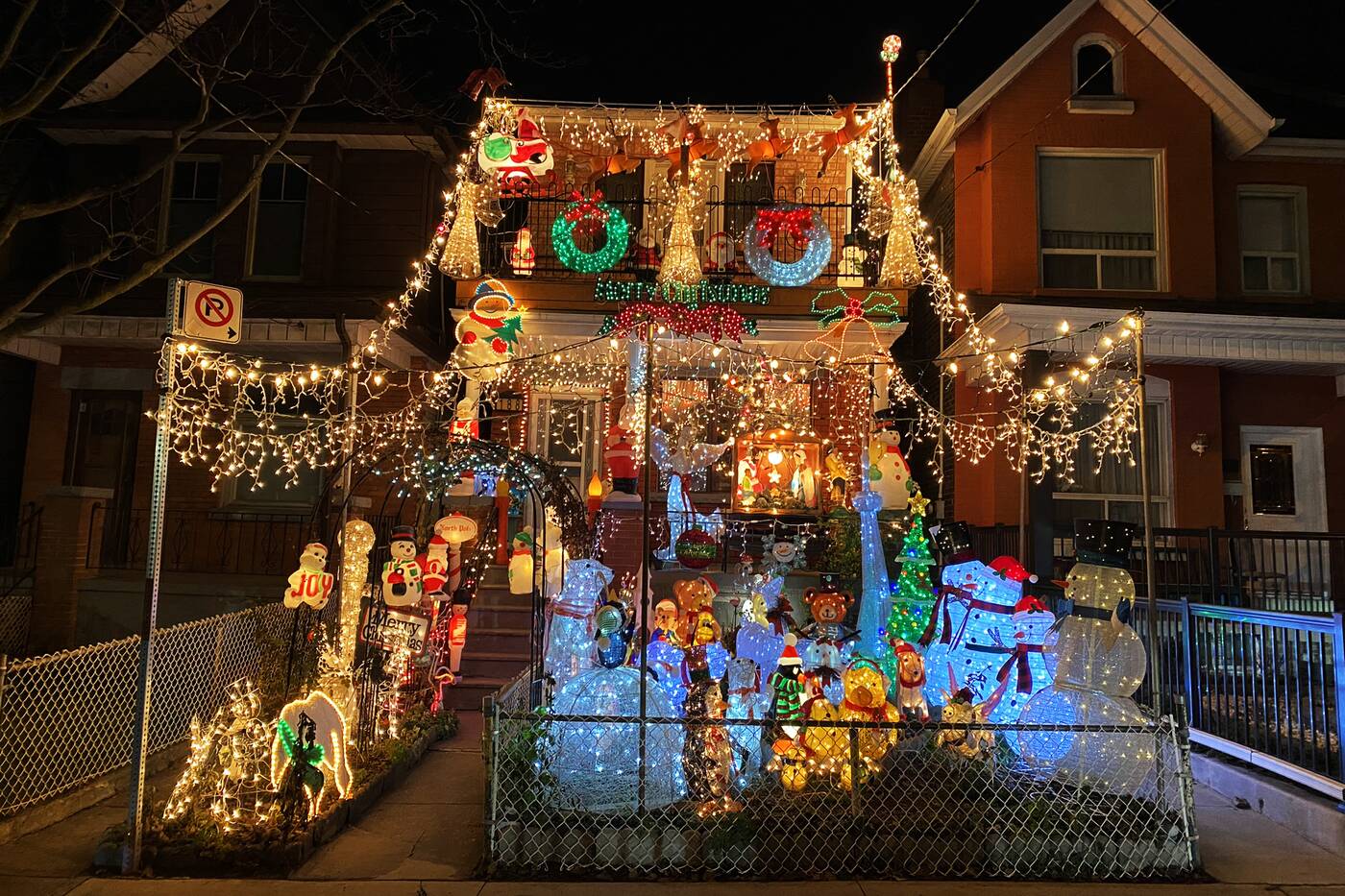 Venture out to Streetsville in Mississauga for a Christmas-decorated home like no other. Lights cover the entire house, a dancing elf and Santa are projected in the windows, and a life-size Mr. and Mrs. Claus statue await at the door. They even play Christmas carols on outdoor speakers to sing along to. 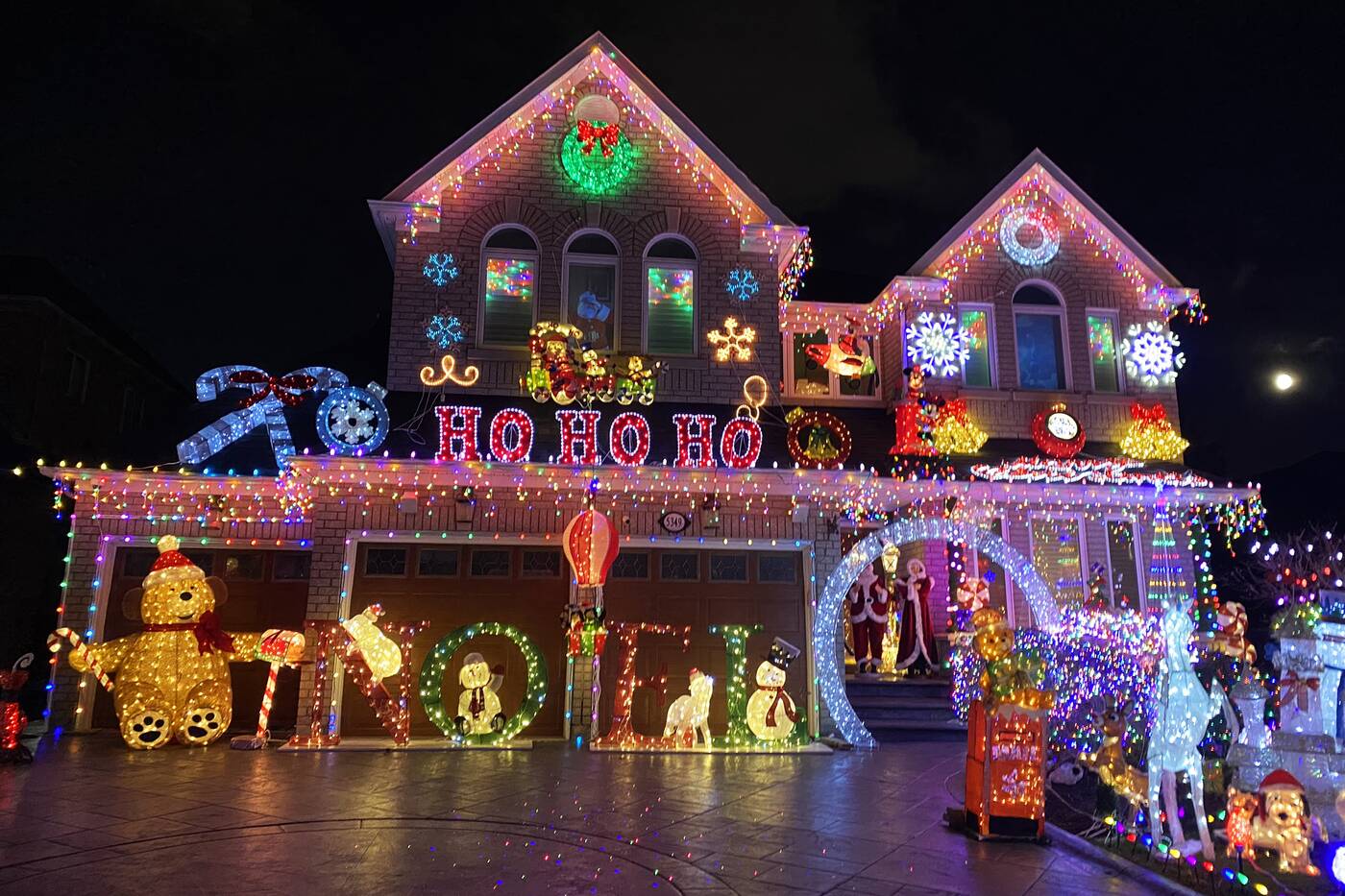 Christmas songs play on speakers while you try to take it all in at this Mississauga home. Photo by Meg Cossmann

Inglewood Drive's annual tradition of putting up 14-foot-tall Santas on their lawns started in 2013, and has returned every year since. Charmingly coined "Kringlewood", over 50 inflatable Kris Kringles line the streets this year. 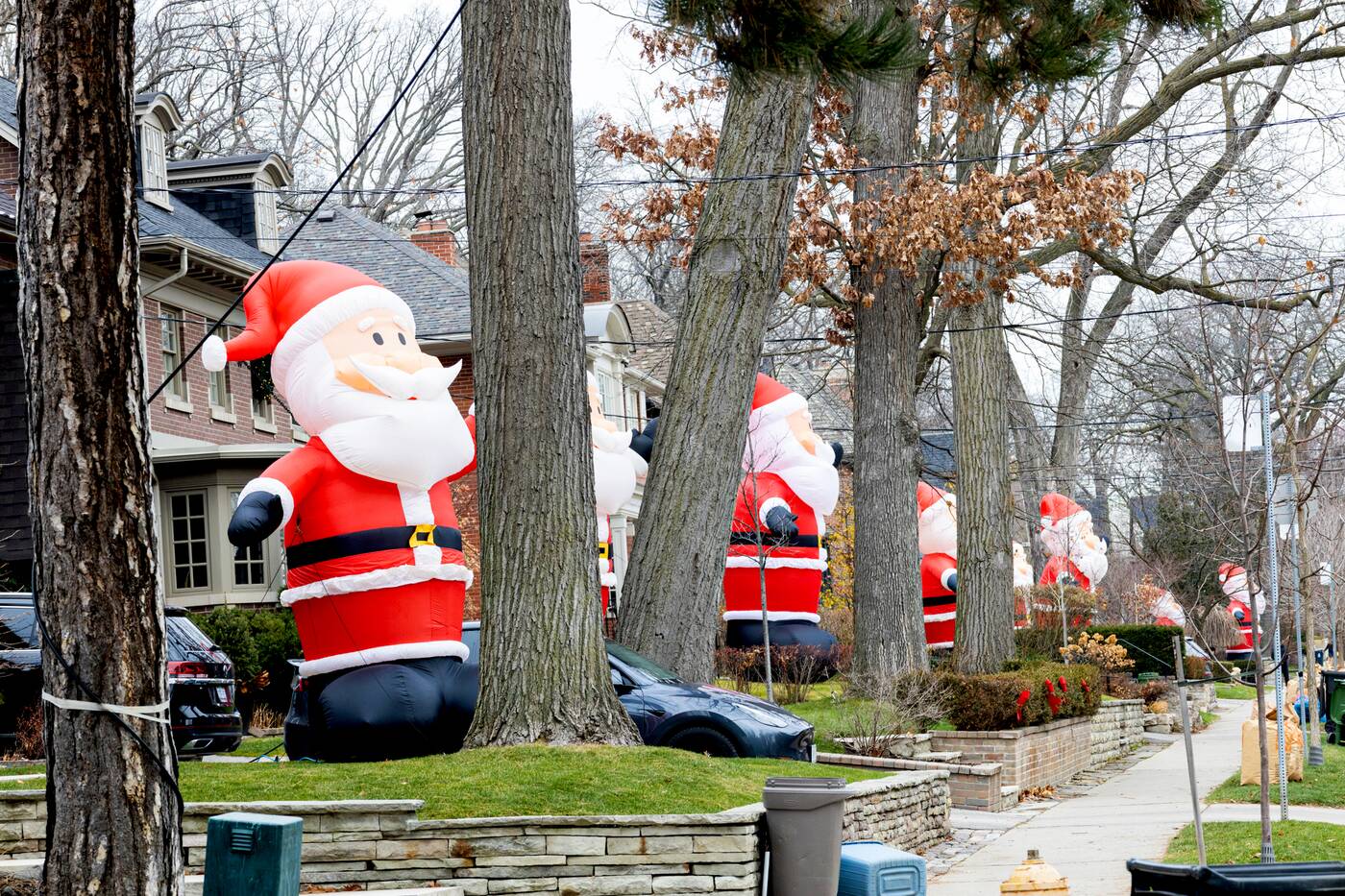 Inspired by National Lampoon's Christmas Vacation, the Rusty Griswold Light Display at 2176 Devlin Drive in Burlington raises money for the SickKids Foundation with their spectacular show of lights and sound.

The animated show features over 10,000 lights which are synced to an FM radio frequency for anyone driving by, and also plays on an outdoor speaker if you're walking by. 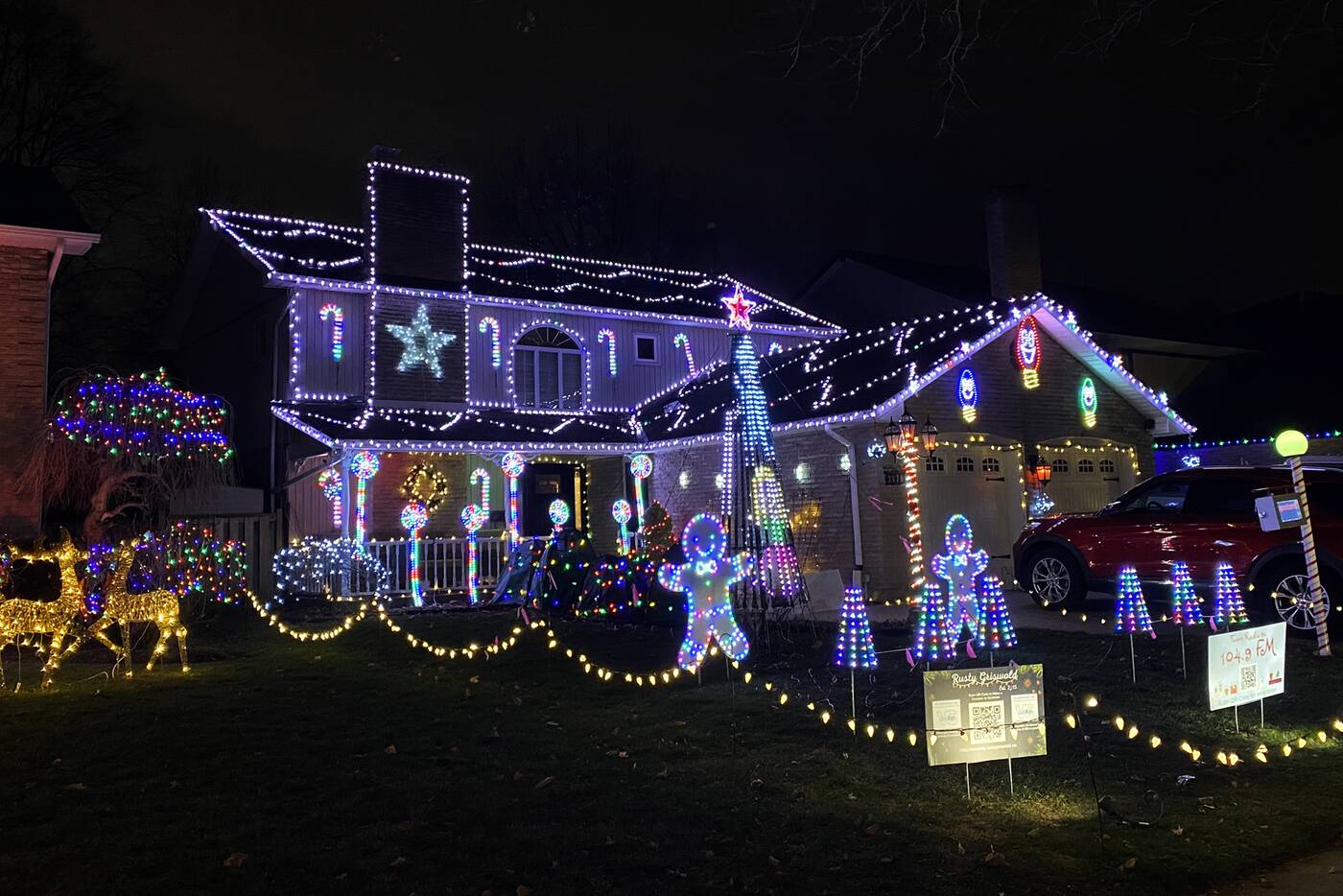 Over 10,000 lights dance to classic Christmas music at Rusty Griswold's in Burlington. Photo by Meg Cossmann

Disney-lovers will adore Magic on Munn's in Oakville. This home has been transformed into a Disney Christmas extravaganza, with cut outs of Disney characters throughout the property (including on the roof!), a model train rounding the yard, and even a Disney movie projected on a screen on the side of the house.

They also made their backyard available for additional fun, with cut-out photo stands and more lights. Magic on Munn's is raising money for Oak Park Neighbourhood Centre. 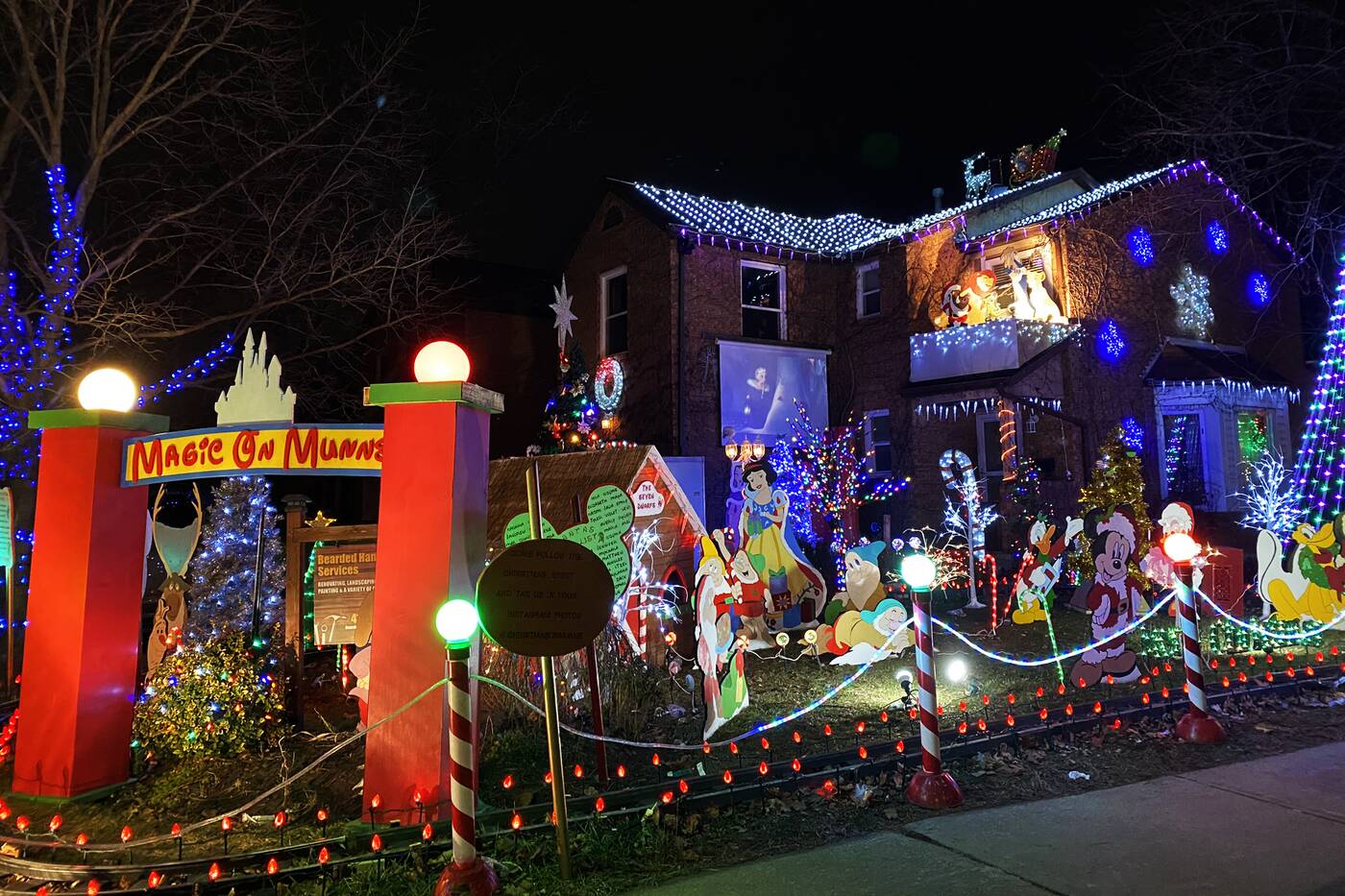 You can watch a Disney film projected onto the side of the house at Magic on Munn's. Photo by Meg Cossmann

May the force be with you at 34 Somerset Avenue, which opted for a legendary Star Wars theme for the holidays. Even Baby Yoda is in the Christmas spirit. This home is a short walk up the street from the stunning lights at 6 Somerset Ave. 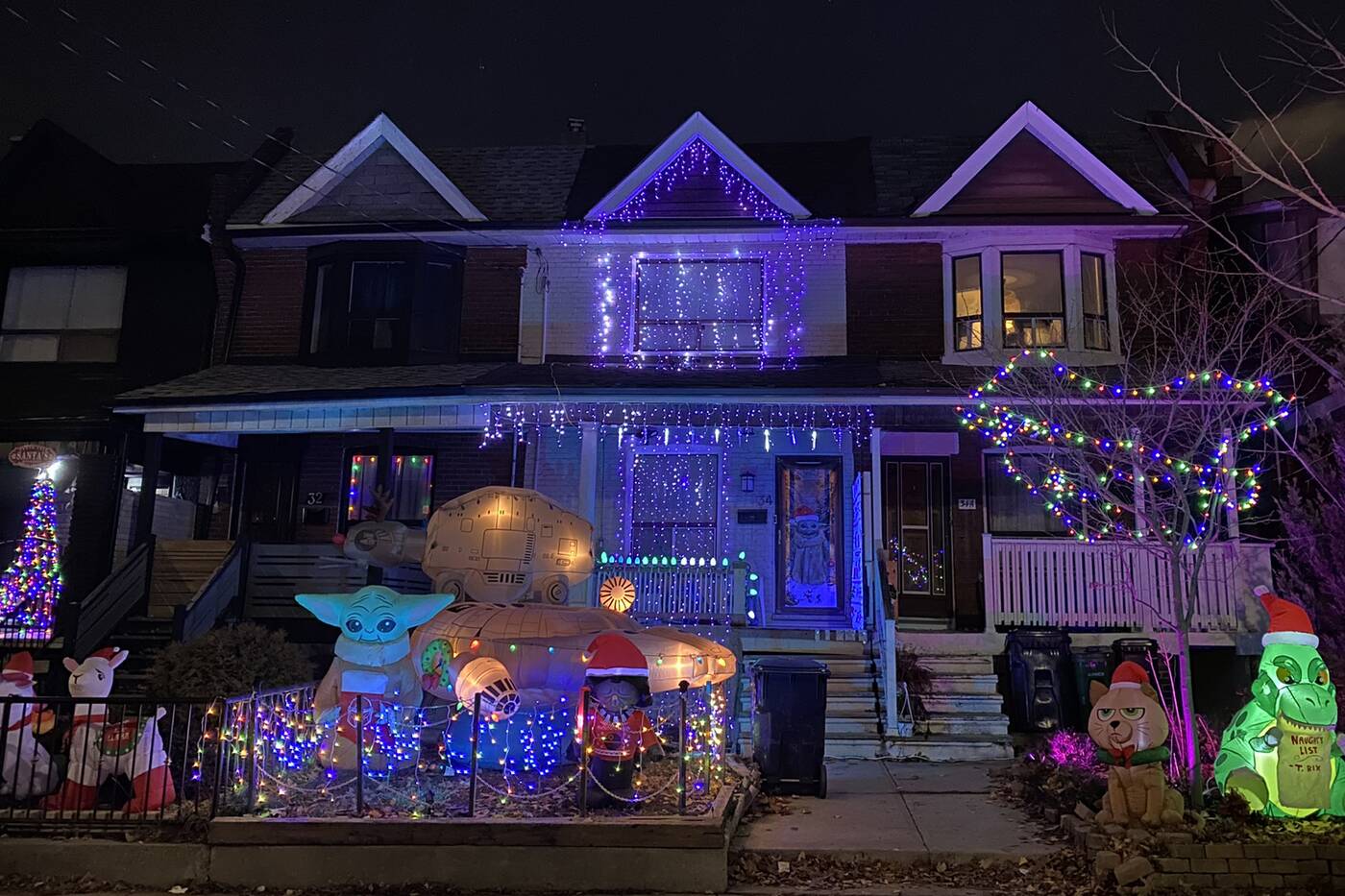 This is the DeSario family's 23rd year of their annual holiday spectacle in support of Sick Kids Hospital. Over 50,000 LEDS brighten up the neighbourhood from this house in North York, and the family has now raised over $270K for the foundation. The DeSario family has raised over $270K for SickKids with their annual display. Photo by Aaron Navarro.

Albino Carreira's home at 473 Clinton Street is notorious for its eccentric exterior year-round, but it's even more elaborate this time of year. Covered in thousands of toys, coins, beads, and small wooden pucks made from discarded pool cue parts called “wood cakes,” it now has multi-coloured Christmas lights woven through for the holiday spirit. 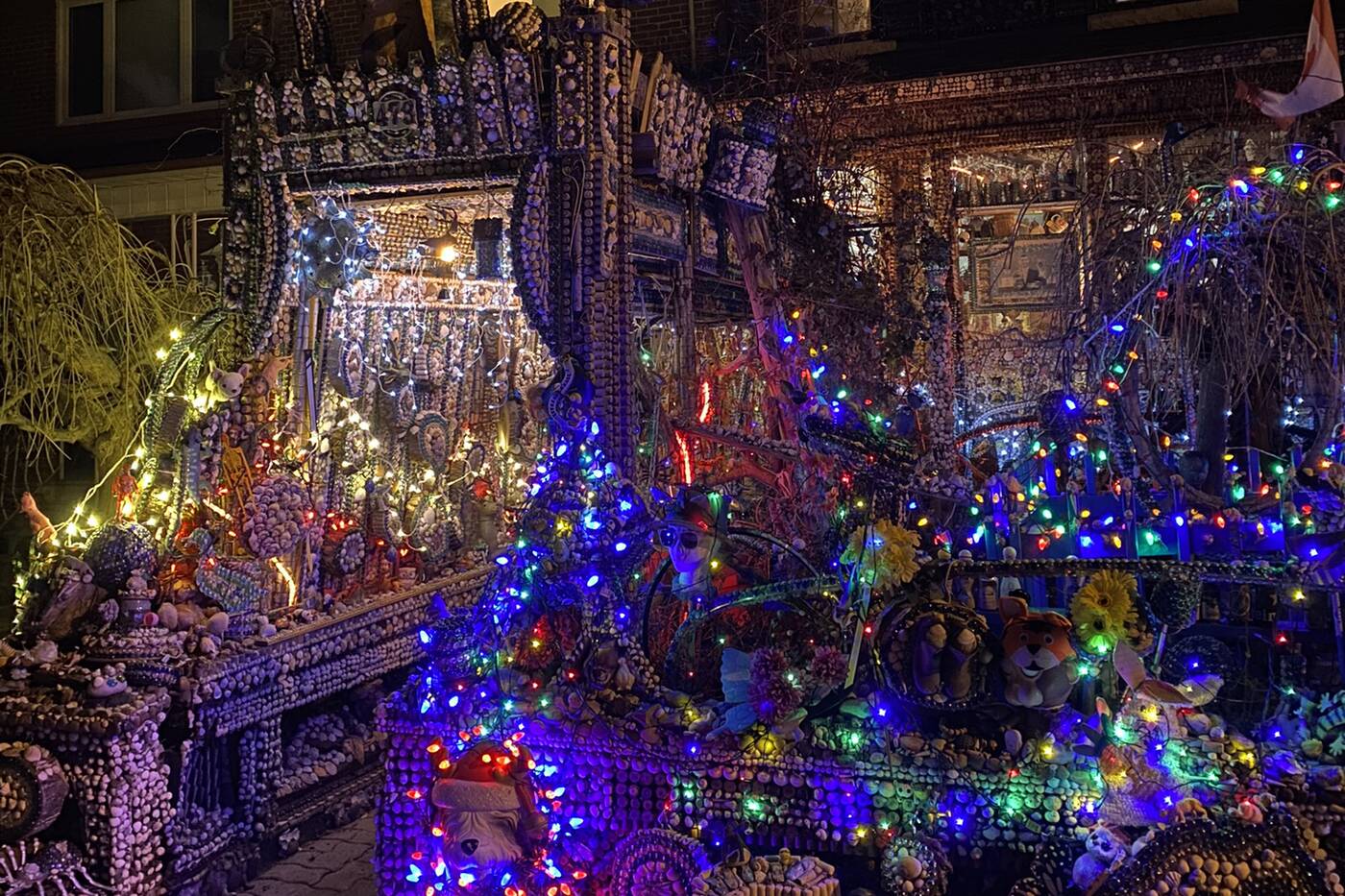 Just up the street from the D'Elia's place, you'll find another decked out home at 262 Brock Avenue. The yard is filled with inflatable Disney characters, snowmen, and other lit-up figures. 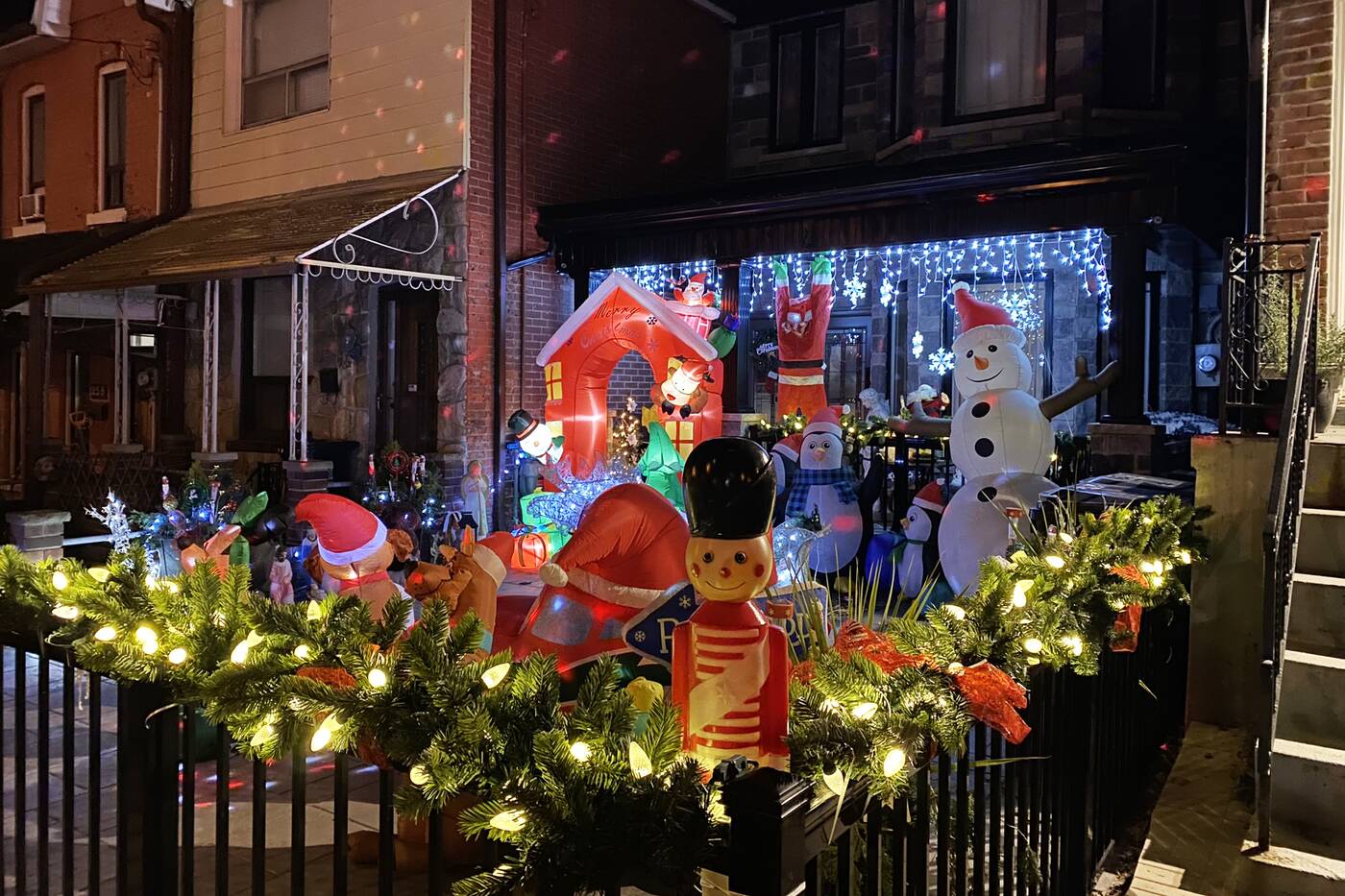 Crescent Road in Mississauga's Lorne Park neighbourhood teams up every Christmas season in a friendly neighbourhood competition of yard inflatables, while raising money and donations for The Compass Food Bank in Port Credit. Over 21 homes now participate with increasingly-creative inflatables, making it a joyous street to walk or drive down this time of year. 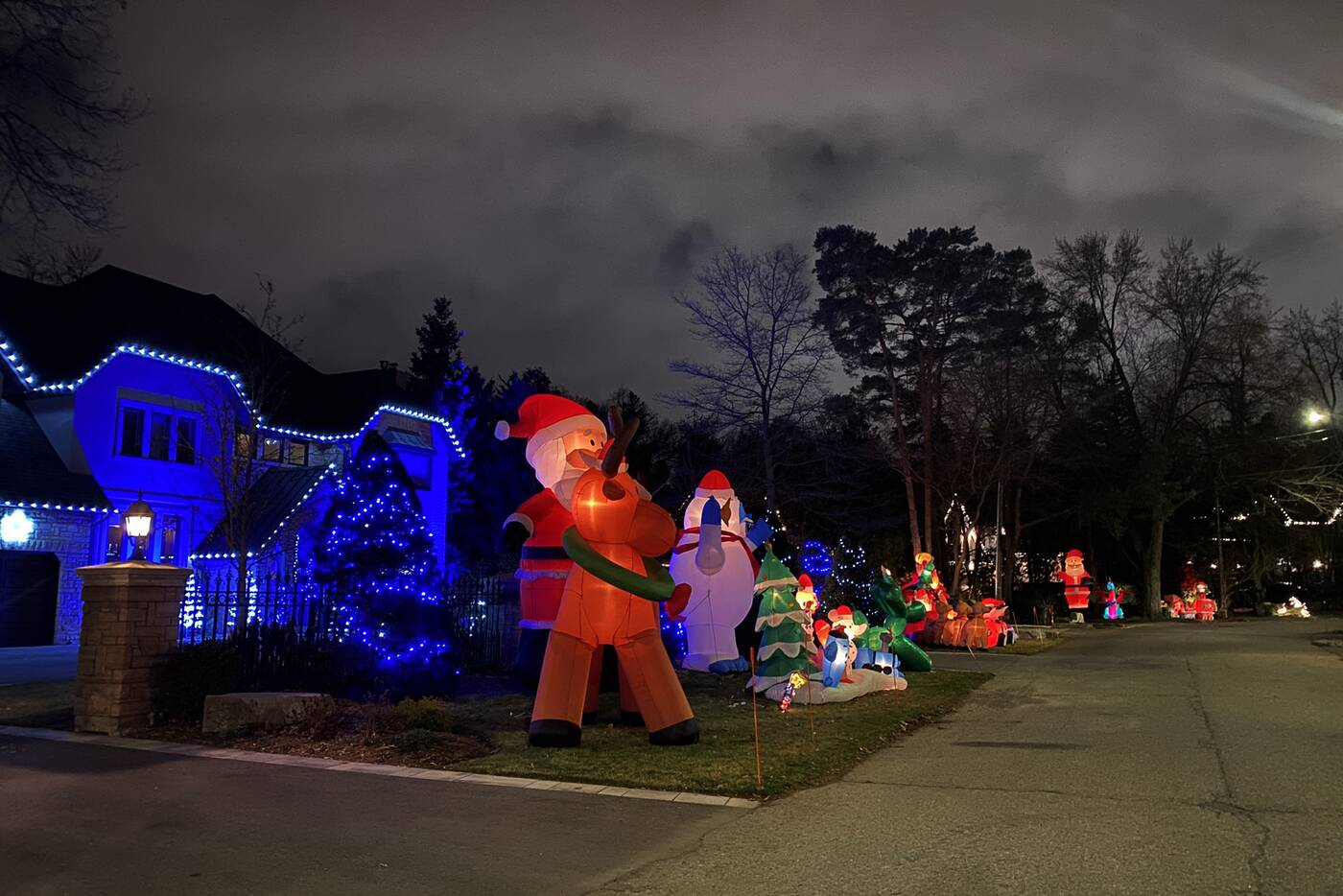 A neighbourhood competition of Christmas inflatables lines Crescent Road, with some singing and dancing. Photo by Meg Cossmann

In Scarborough, The Patterson family and the McKenzie family have been transforming their lawns into winter wonderlands together since 2010.

Decorate Brenyon Way asks those who visit to donate to their choice of one of the following charities they support, including: SickKids, Canadian Cancer Society, Ontario SPCA and Humane Society, Food Banks Canada, and Daily Bread Food Bank. 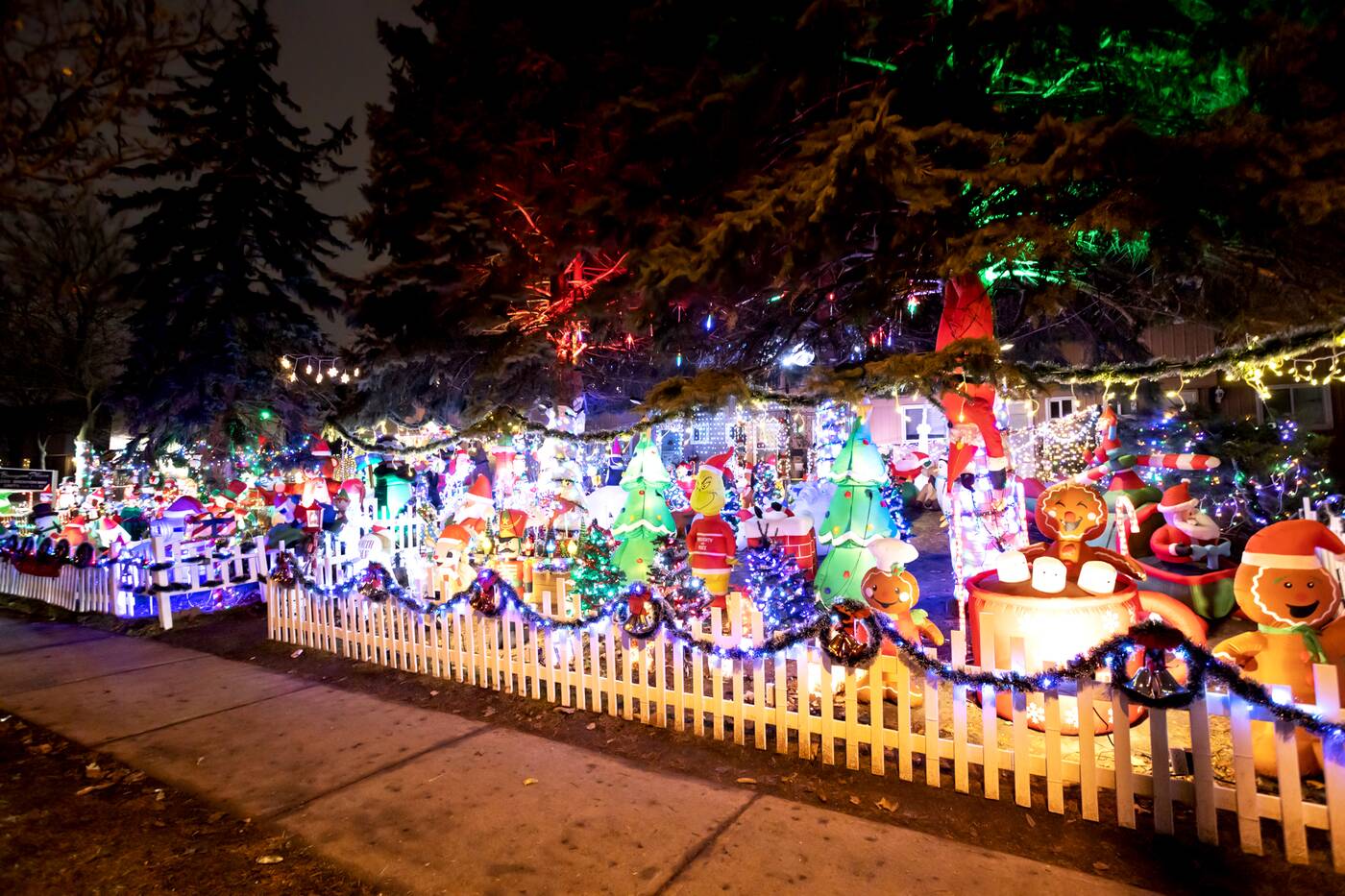 Jackson Family Lights in Oakville puts on an incredible light show synced to music, in support of the Lighthouse for Grieving Children and Oakpark Neighbourhood Centre charities. They are also collecting non-perishable food donations for the Kerr St. Mission Food Bank.

Located at 113 McCraney Street W, over 25,000 LED lights twinkle to Christmas songs which you can tune into on your car radio. 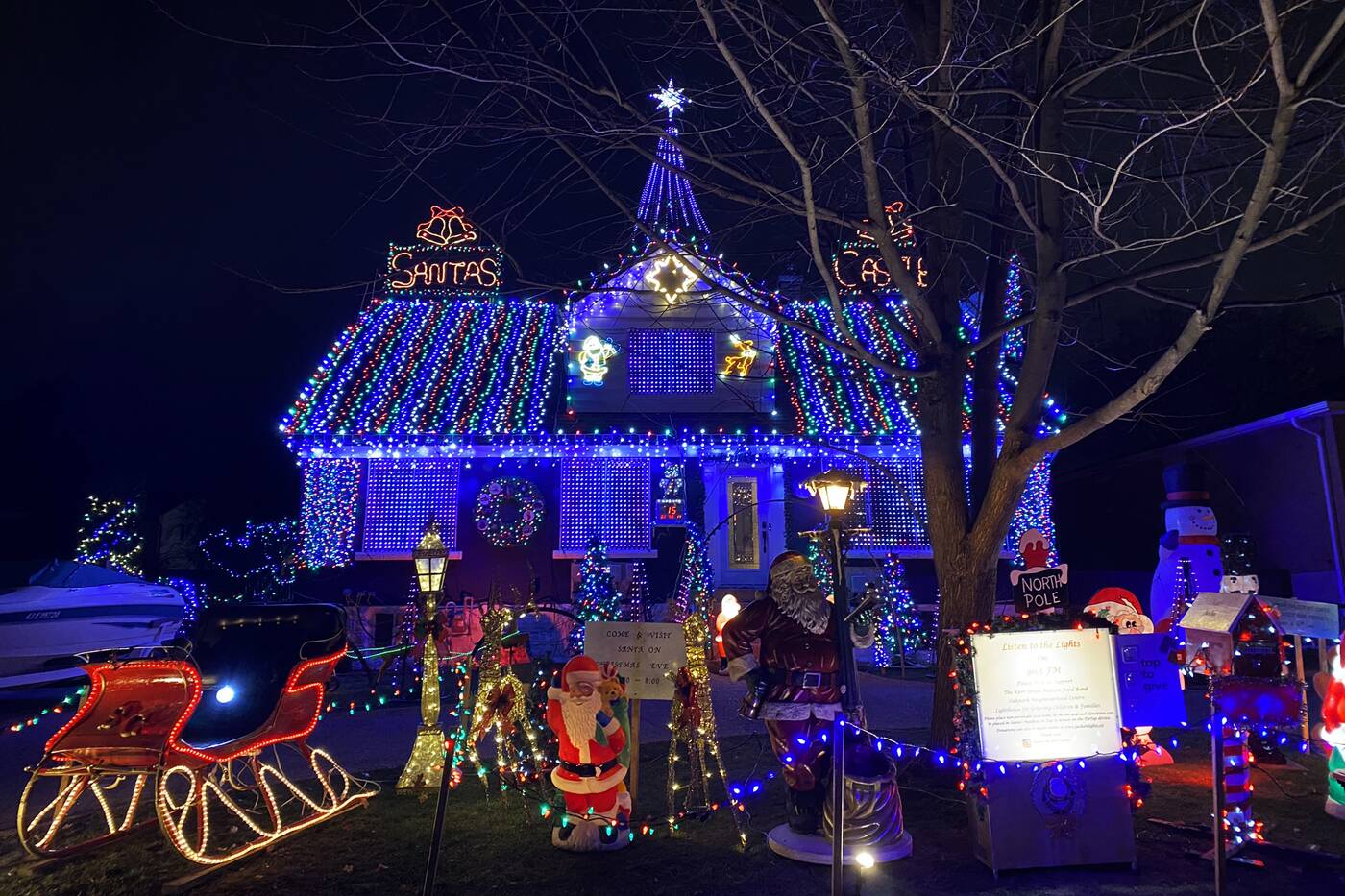