If goods are only worth as much as people are willing to pay for them, a bottle of children's Tylenol is currently more valuable than a bottle of high-end black truffle oil.

Kid-strength acetaminophen (the generic name of the fever-fighting, pain-relieving medication sold by brands like Tylenol) has been in short supply over the past few weeks as cases of respiratory illness rise among Canada's pediatric population.

Many in Toronto have noted that shelves normally filled with cough syrup and fever meds have been nearly-bare since colder weather started rearing its head, particularly as Ontario faces a child-targeted "triple threat" of illnesses that officials say are putting "extraordinary pressure" on our hospital system.

You might here me repeatedly say, "Oh, Canada!!" 😬😮‍💨fom all the incredibly dumb stuff we keep seeing... #liberalloss https://t.co/O6akIYVkhO

A combination of COVID, Influenza and Respiratory syncytial virus (RSV) has created an ER situation, filled with kids, described by Ontario Health's Dr. Chris Simpson earlier this week as "unlike anything we've seen."

Doctors say milder cases of some ailments can and should be treated at home to preserve hospital capacity, but without any medication on pharmacy shelves, what is a parent to do?

Some are turning to the U.S., going on cross-border runs and picking up basic medications to relieve pain, fever, cough and cold symptoms in their little ones.

Others are turning to the internet, where you can certainly find anything your heart desires... at a price.

Amazon in 🇨🇦 is completely sold out of children’s fever medication. A 4 oz bottle of Children’s Advil costs $210 and will take 3+ weeks to arrive. Things are looking pretty f*cking dire. But just let it rip, right? Our leaders have failed our kids repeatedly. pic.twitter.com/bLhWWTpt1V

I'd love to say that Canadians would never profiteer by buying up health products for kids, only to turn around and resell them for ridiculous amounts.... but this exact kind of thing has been known to happen. And it's happening again. Right now.

Shortage in kids tylenol and advil pushing the greedy sellers on Amazon to sell the kids ibuprofen suspension for 48$$ ( i bought one last week at 12$ in a pharmacy) is this government doing something??! #canada #healthcare pic.twitter.com/5eMlwYzOyM

Earlier this week, screenshots circulated on Twitter showing that some Amazon stores were selling kids' Advil for as much as $300 a package.

FYI children's Advil is almost 3 to 4 times the price on Amazon. Even in US, states closer to Canada have run short because of Canadians traveling and buying from there. Had it checked yesterday pic.twitter.com/OeD0dZGIgt

Amazon appears to have cracked down on this in light of media and regulator attention, telling Global News on Tuesday that Health Canada "took immediate action" against people selling children's pain medications online at inflated prices.

Amazon confirmed at the time that it would take action, and this appears to ring true based on what's currently available for purchase on the global retailer's website —  but private sellers of marked-up drugs can still be found on community websites like Kijiji and Facebook Marketplace.

Someone in Brampton was selling just a small bottle of baby Tylenol — a product that normally retails for less than $20 — for three times its normal worth as of Thursday evening. Screenshot: Kijiji.ca.

Kijiji, for its part, does seem to be keeping a close eye on the situation. Listings for inflated children's medications are being scrubbed completely every few hours.

Either that, or desperate parents are buying this stuff up faster than sellers can advertise them.

Facebook appears to be hiding such listings, as well. blogTO can confirm that there were dozens on Monday (though not nearly as inflated in price as those on Amazon) that are inactive.

What's interesting about Facebook Marketplace is that if you search for children's Tylenol or Advil today, you'll actually find some people offering up medications to those in need for free — a reversal of the proverbial pendulum.

"Children's Tylenol at my cost," reads one listing for $25 out of Thames Centre, Ontario. "Age 2-11. I imported these to do my little part, pricing is my cost including import fees taxes, exchange etc. I have 6 available."

"Infant Motrin up to 2 yrs," reads the 100% free listing for another children's pain and fever relief product, posted by a kind human in Barrie, Ontario. "Unopened box for babies up to 2 years. Expires May 2023. Would like to pass to a mom in need." 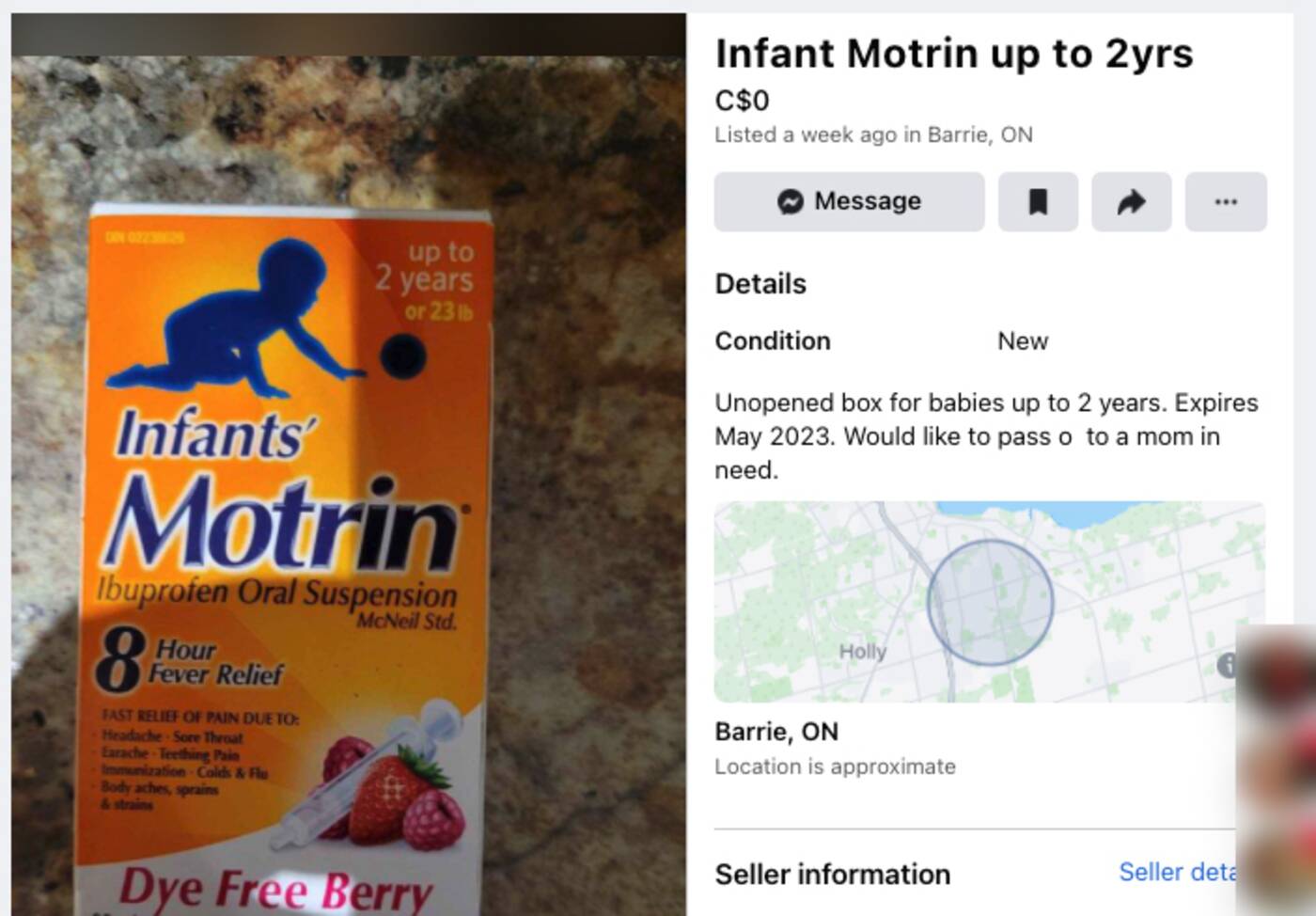 For all of the horrible people in the world, there are some good people too. Screenshot: Facebook Marketplace.

While it sucks that some people are profiteering off of Ontario's ongoing pediatric health crisis, at least it's not our own government or captains of industry gouging Canadians for meds (mostly).

Abhorrent as the behaviour may seem when acted out by an individual, corporations are way, way worse.