When roaming through Toronto's Union Station — Canada's largest travel hub of its kind, which just went through a massive upgrade, no less — one would think that wayfinding would be clear, official and accessible to all who are trying to get around the sprawling building.

But, one commuter has found that this is not exactly the case, at least when it comes to finding the station's fancy new GO bus terminal, which opened its doors at the end of 2020 in a different location than the old one.

Apparently, station staff are being asked for directions to the terminal so often that employees decided to create their own map to help passengers while the kiosk under the VIA departures and arrivals board.

"200,000 passengers a day. The directions to the bus station," one resident wrote on Twitter alongside a photo of a map titled BUS STATION!!, hand-drawn on lined paper with Sharpie, pen and highlighter and posted in a kiosk window.

On the map is Union's Great Hall and VIA Rail terminal, on which "you are here" is written. On either side of the Great Hall are GO Train platforms, past white a railway is marked with large Xes.

Also on the map are the boundaries of York Street, Front Street, Bay Stret and Lake Shore Blvd, and the landmarks of Scotiabank Arena and Jurassic Park.

Then, in the bottom right corner, is the bus station highlighted in yellow. 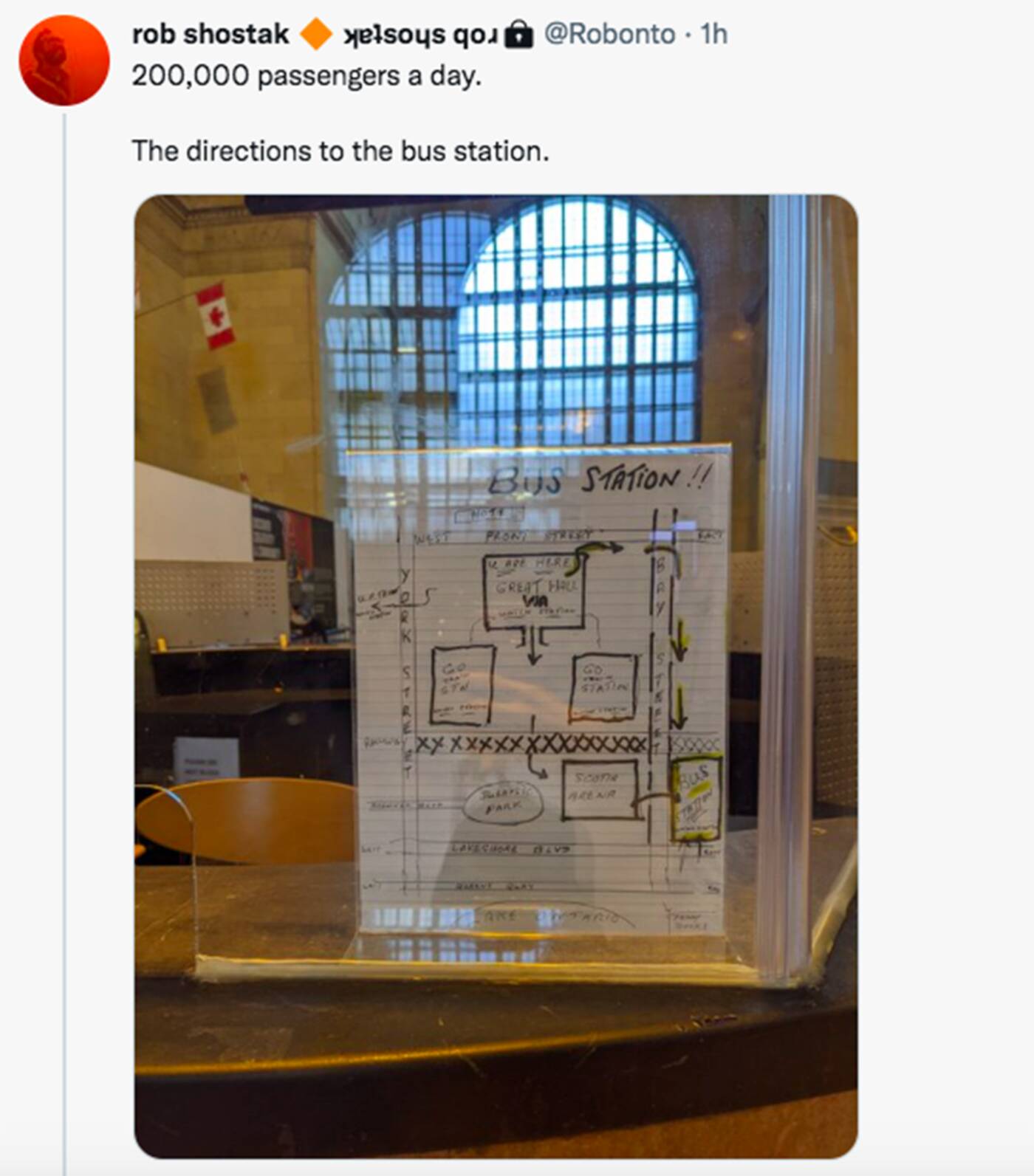 "I experienced the frustration and exasperation of the people around me looking for the bus station until they stumbled upon this drawing."

"The bus station's location is truly baffling the first time... I would have ended up in Scotiabank Arena thinking 'this can’t be right,'" another sympathized.

Though the City of Toronto assures blogTO that the station directory and wayfinding maps are "posted throughout the station at key locations" and do show where the new bus terminal is, it seems that enough people are still confused as heck by the station to warrant the unnamed employee's work of art.

Metrolinx was unable to respond by the time of publication to indicate how much of an issue people have had finding the new terminal.

With even more major renovations slated for Union in the coming years, we'll have to see how many more passengers end up confused by the changes.