There are certain parts of some Toronto roads that really seem to confuse drivers in the city, whether its bike lane markings on one throughfare, a streetcar tunnel on another, or one of a handful of very confusing intersections.

Despite clear pavement markings, signage and more, motorists continue to screw up in particular spots around downtown — the latest one being a spot that sees traffic violations virtually all day, every day.

Residents in the St. Lawrence neighbourhood have clearly had enough of people mistakenly (or just ignorantly) driving their cars down lanes of the Esplanade at Princess Street that are clearly reserved for bus and bike traffic only, as marked with bright red pavement.

I notice this almost every day too. Also notable that they’re all heading westbound in the eastbound lane. One person does it and they all blindly follow

While locals have been trying to bring the ongoing problem to the attention to both the city and Toronto police, they complain that nothing is being done, and that officers have been lax with enforcement even when they are on the scene.

"It has a one-way road with bus and bike access only, which is new, but there's lots of signage," local Sohnee Ahmed told blogTO over email.

"Every day, cars break the law here. We have photographic evidence of police being here and not ticketing, even though officers have openly admitted that they're seeing illegal driving... It's like a 'choose your own adventure' game re: which roads to drive on."

Community members even gathered to physically block the road from disobedient drivers this week, Ahmed added, with the cops eventually arriving but doing "nothing except to tell the people to leave the intersection."

Red markings and signage indicate bus-only lanes from Frederick St to George St S and Lower Jarvis St to just west of George St S to prevent traffic infiltration and prioritize the TTC bus. People may cycle in the latter part until the western extension of the cycle tracks. (5/8) pic.twitter.com/h4SjPbNwaJ

Many on Twitter and Reddit are calling for better solutions, whether it be increased presence of traffic police in the area, cameras that ticket violators, additional signs to warn drivers of the rules, or even infrastructure changes that would block or damage cars, but permit buses through.

One person pointed out on the latter platform that a key issue is the fact that Google Maps still recommends the route during congestion, with drivers choosing to ignore the plaques and markings, not only for the bus lane, but for the road direction.

And one person stated on a popular Reddit thread on the topic "I constantly see people driving on there... and going the wrong way. It's ridiculous, and just shows that people these days only see laws as suggestions." 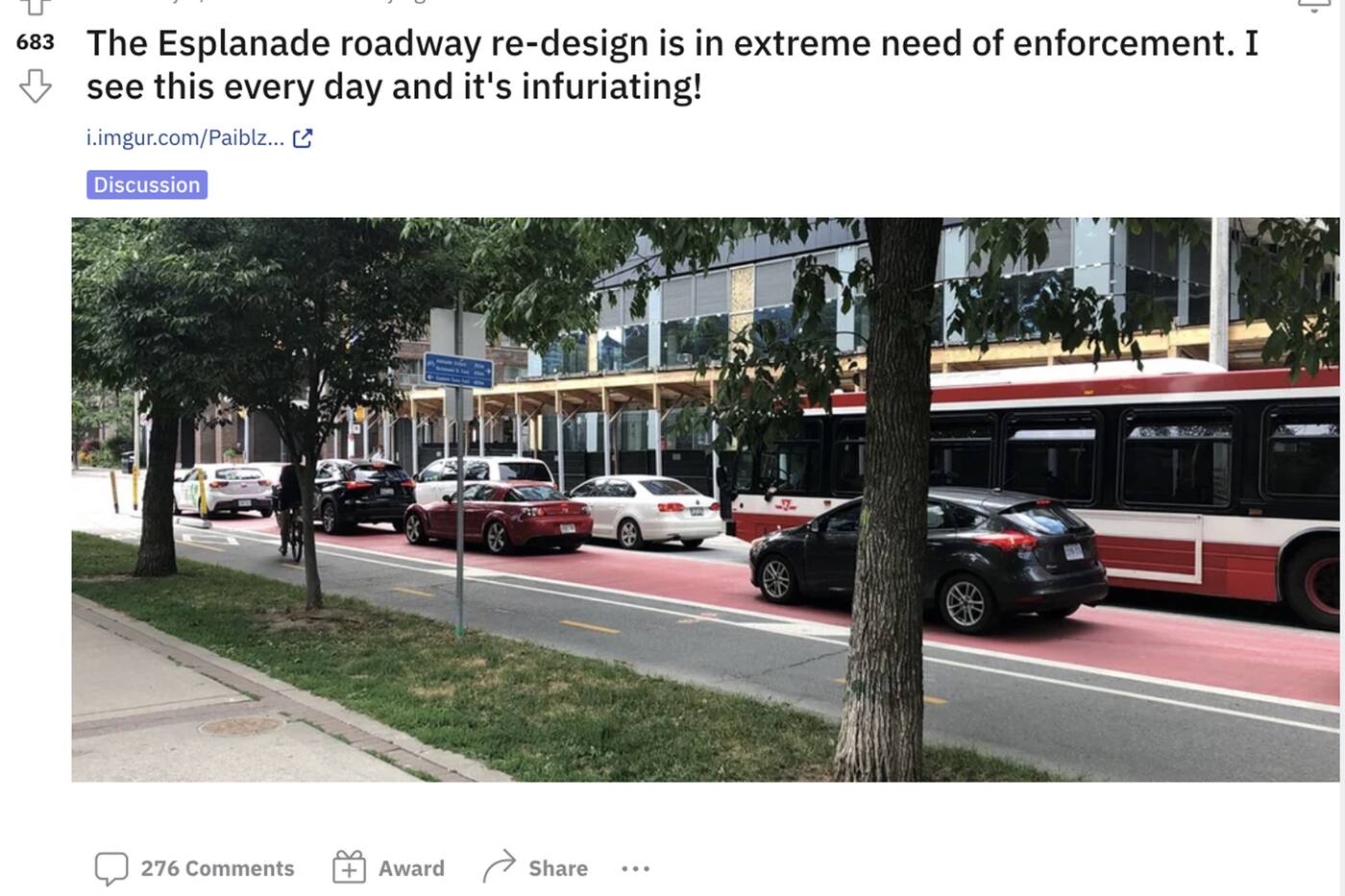 A Reddit thread about the matter this week garnered 683 upvotes and 276 comments and counting from people complaining that drivers defy the rules daily with no consequence.

When pressed about the issue, the city directed blogTO to Toronto Police Service, who did not acknowledge whether the street is known to be problematic, or what their plans for tackling the problem are, if any.

"Those who are affected by this can go to our website and file a local neighbourhood traffic concern at www.torontopolice.on.ca," a media relations officer said.