An avian menace is wreaking havoc on one of Toronto's natural jewels, and nobody seems to be in a huge rush to do anything about it.

Cormorants nesting on Toronto Island are threatening to turn the popular urban getaway into a barren, smelly scene right out of an Alfred Hitchcock movie.

Thousands of the large aquatic birds have invaded and established a beachhead near Hanlan's Point, bringing with them a cacophony of squawking, dead and dying trees, and the omnipresent smell of bird poop. 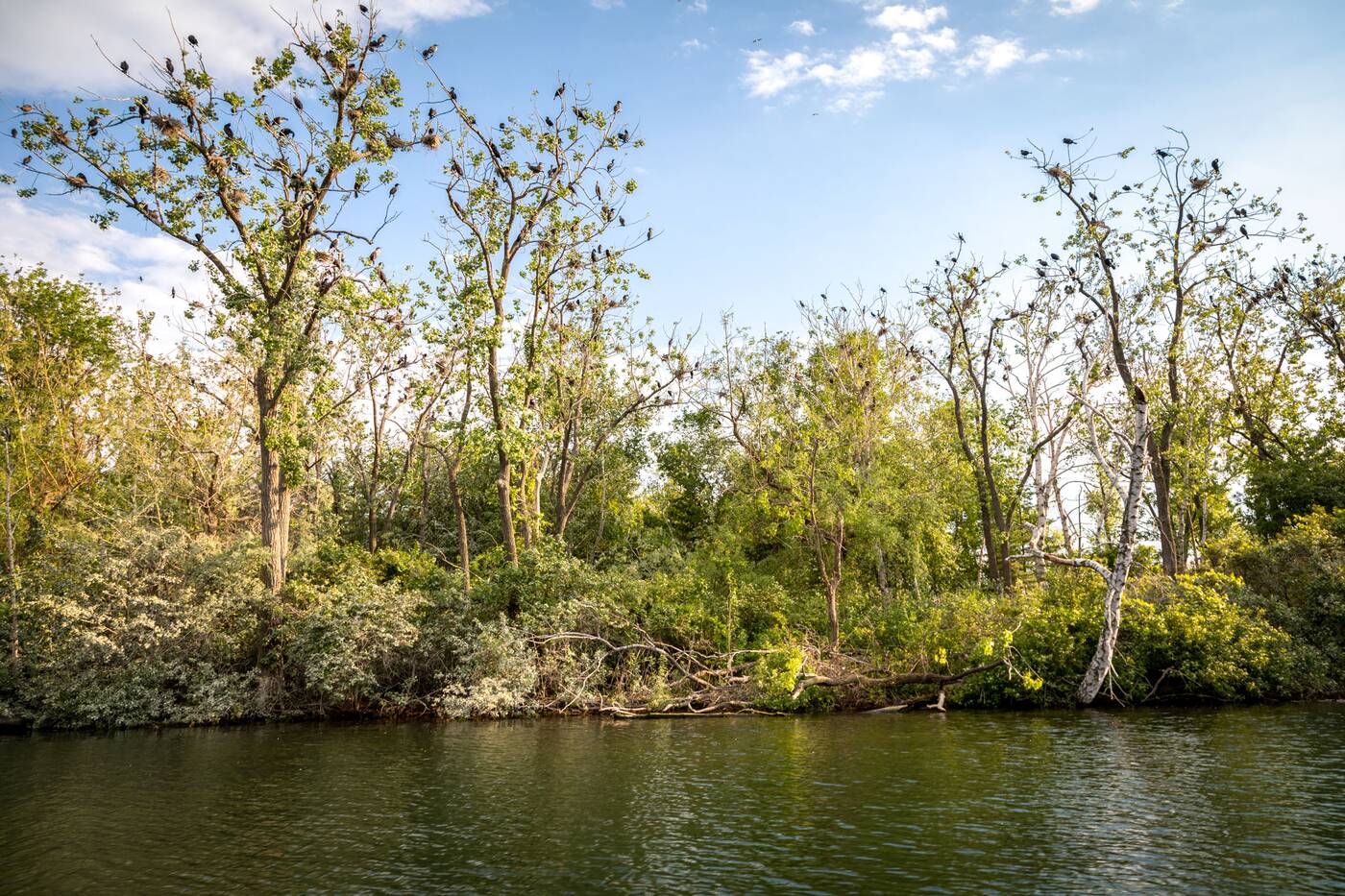 If you've ever paid a visit to Tommy Thompson Park, you've undoubtedly seen the work of double-crested cormorants. The large birds and their distinctive hooked orange beaks are among the dominant species on the Leslie Street Spit. 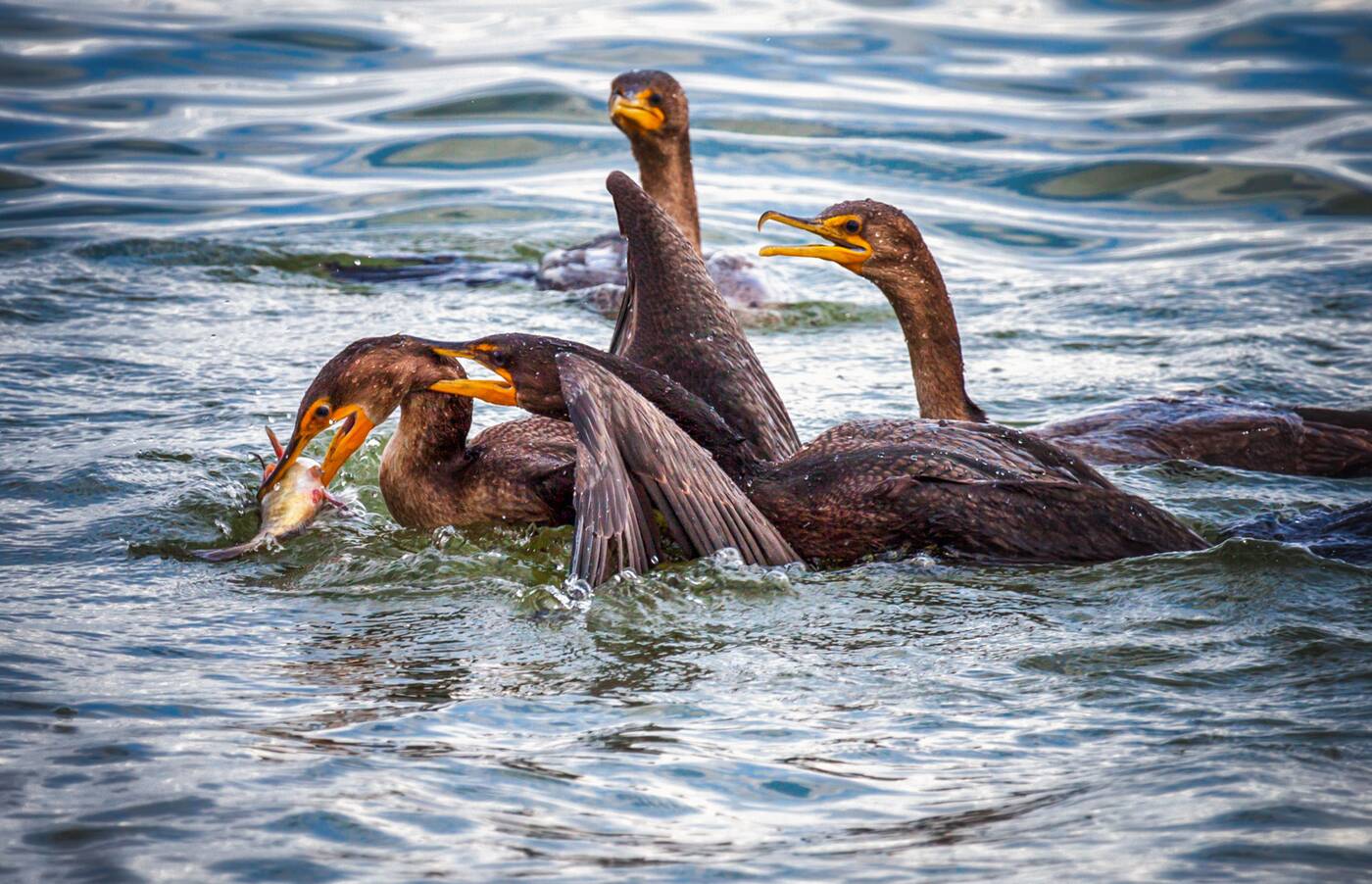 They were on the verge of extirpation (a localized extinction) in the late 20th century, attributed to the now-banned pesticide dichlorodiphenyltrichloroethane, or DDT.

Cormorants may be pescatarian, but DDT's lethality snakes all the way up the food chain, and the chemical devastated local populations. Canada suspended the registered use of DDT in 1985, and cormorants witnessed a dramatic recovery in the following years. 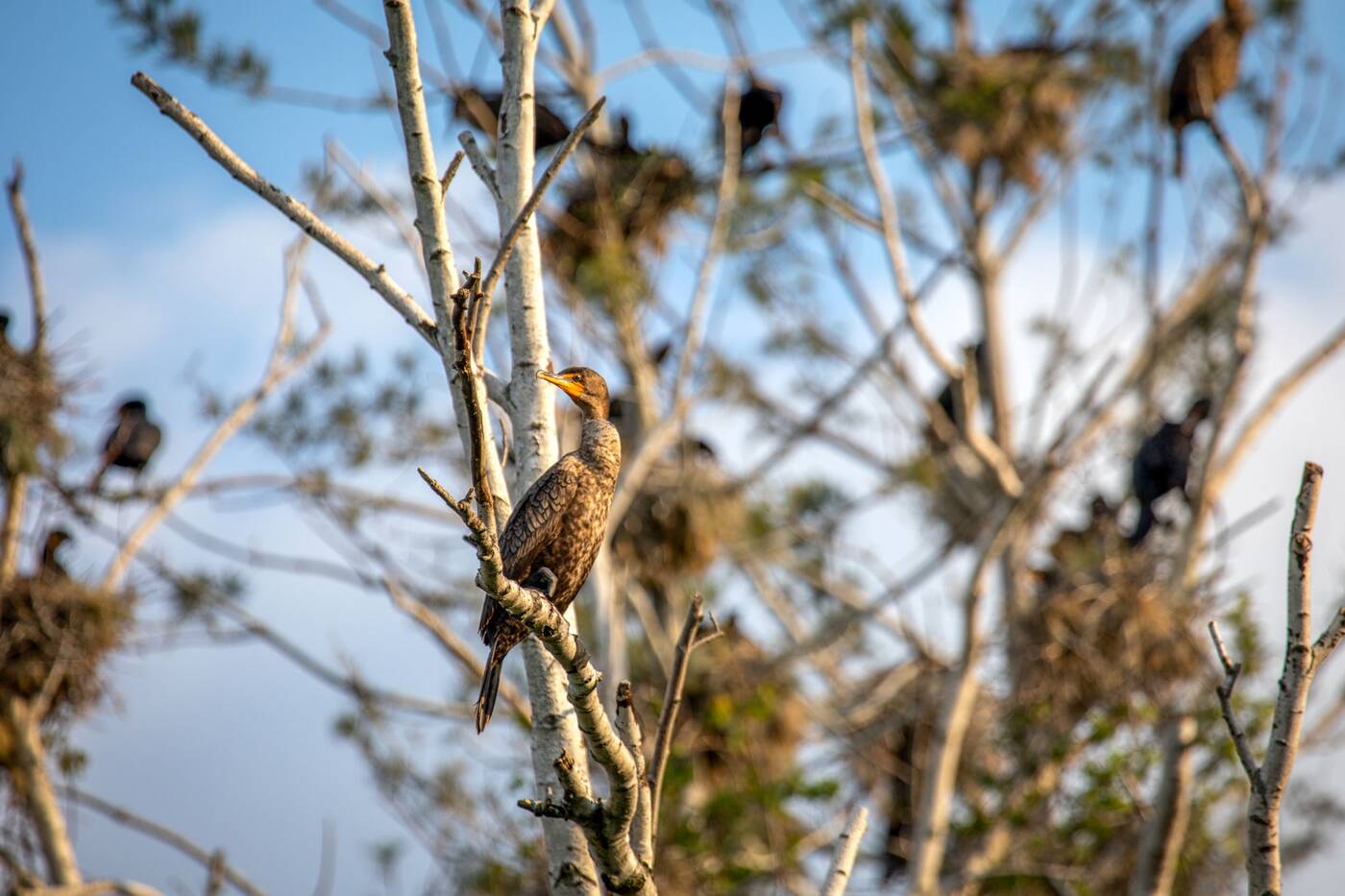 A population that had been nearly wiped out exploded in size starting around 1990, turning Tommy Thompson Park into the largest breeding colony on the continent. An estimated population of around 30,000 birds in 2009 swelled to between 60,000 and 70,000 by 2018, though some population decline has been noted since 2019.

Such vast numbers have done extensive damage to the park. The birds rip apart green canopies to build their massive nests, leaving barren treetops populated only by birds and their nests above, and smelly, acidic, ammonia-rich guano below.

Trees typically die off within three to ten years of cormorants taking up residence. The birds' rampant defoliation and piles of guano destroy the soil's chemical composition and deprive trees of oxygen.

In small doses, the guano actually acts as a fertilizer, but when there are thousands of these birds swarming and depositing a constant deluge of poop, the trees just can't cope with the stinky onslaught.

These same trees are the foundation of an extensive ecosystem, and when cormorants move in, it forces many other animals out in time as the birds' presence gradually chokes trees of life. 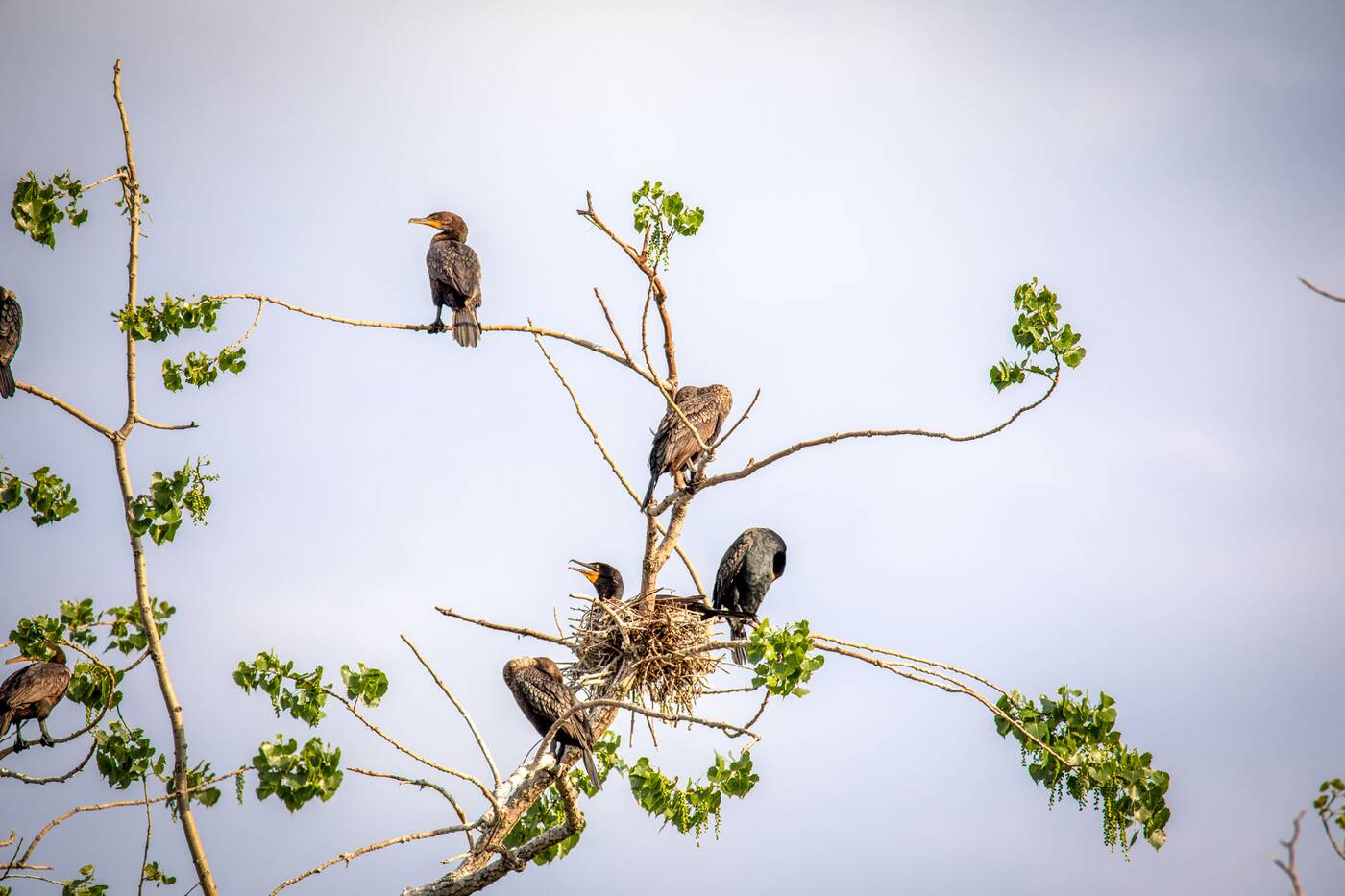 It was a problem localized to the Leslie Spit until very recently, when a colony was spotted along the coastline of Blockhouse Bay and Long Pond immediately east of Hanlan's Point. 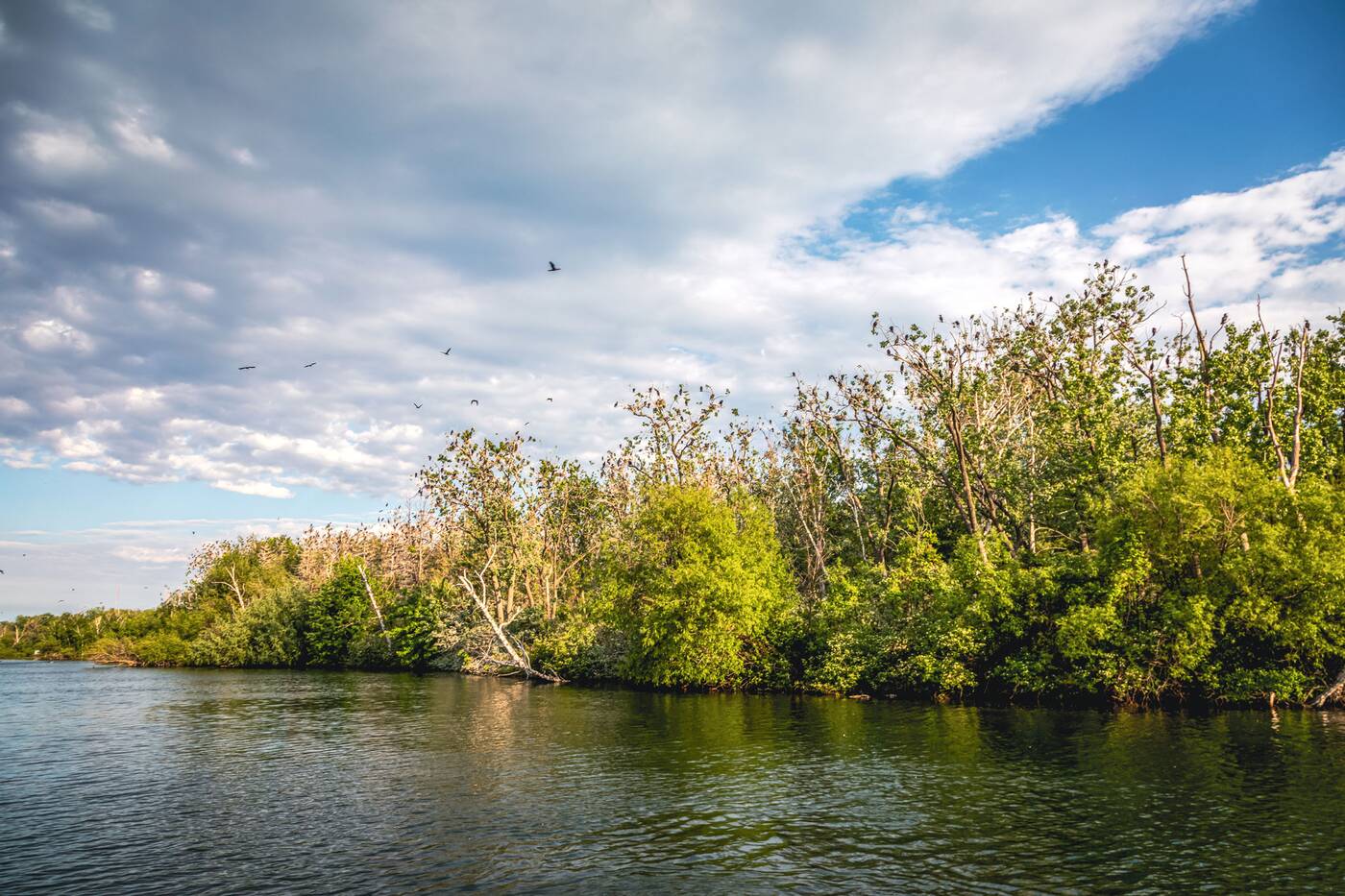 The cormorant presence in the area may be new, but it has already caused extensive damage to the forested area northwest of the Island Water Treatment Plant. 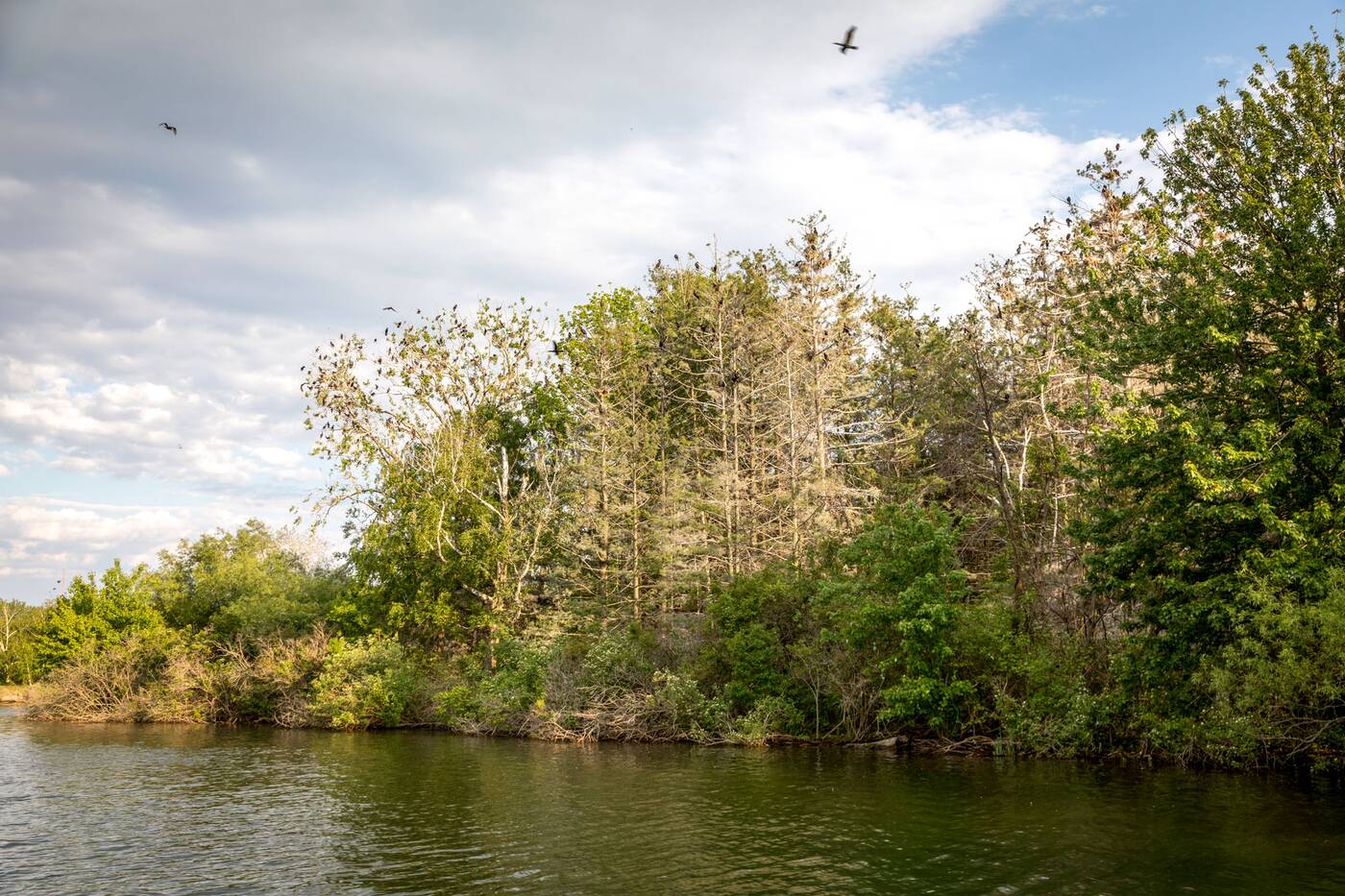 Toronto Island Marina manager Gordon Ballantyne says that "the issue is getting bad quickly," adding that "there has been somewhat of an outcry" from island residents and boaters who have been among the first to notice the new colony. 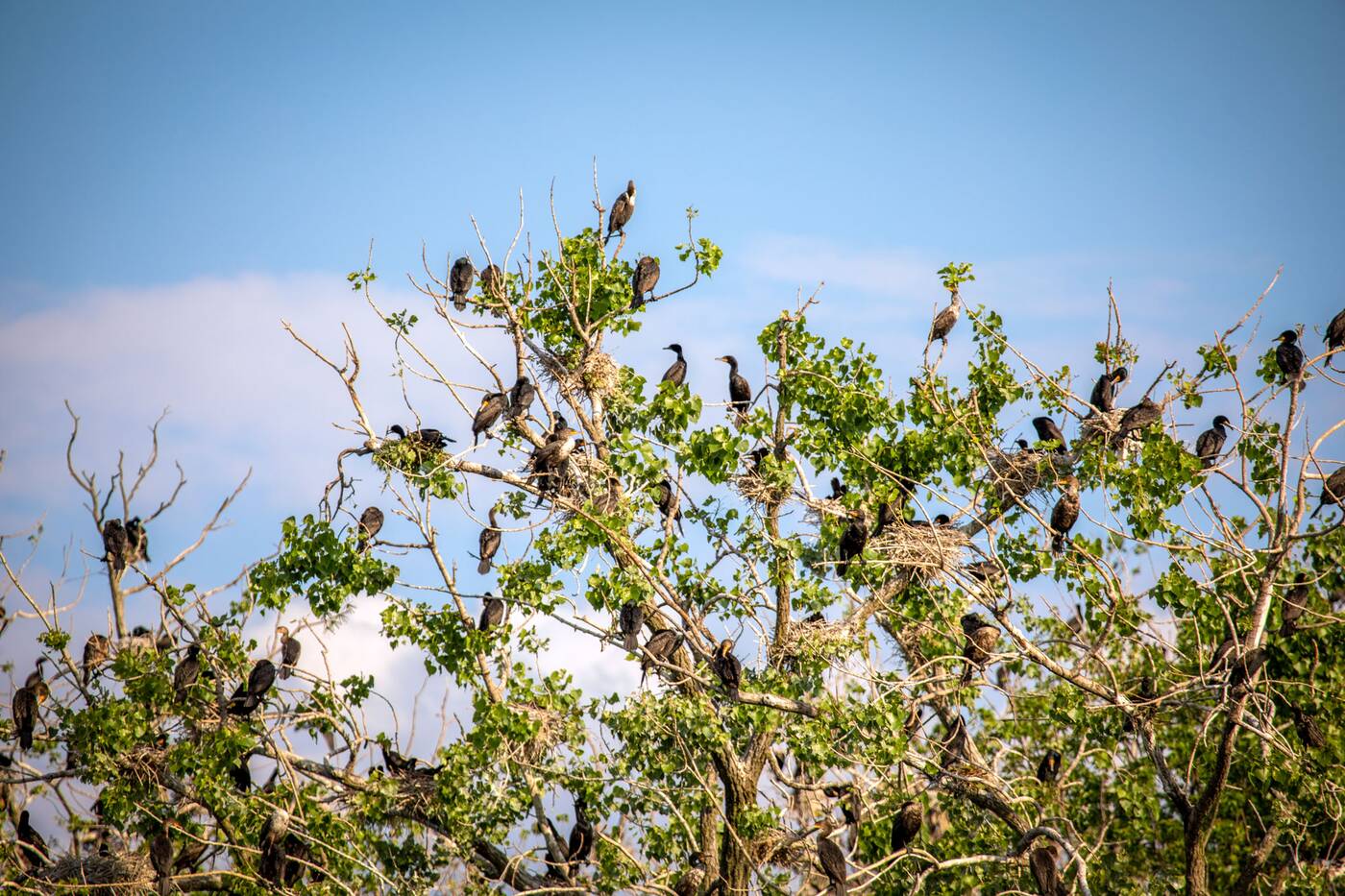 Only a few hundred metres to the west, tree cover is an integral part of the experience at the clothing-optional Hanlan's Point Beach, providing the only real noise buffer and visual barrier between the beach and Billy Bishop Airport to the north.

If the cormorant problem expands as it has at Tommy Thompson Park, the city's top hangout for naked people will lose the critical conditions that allow it to thrive. 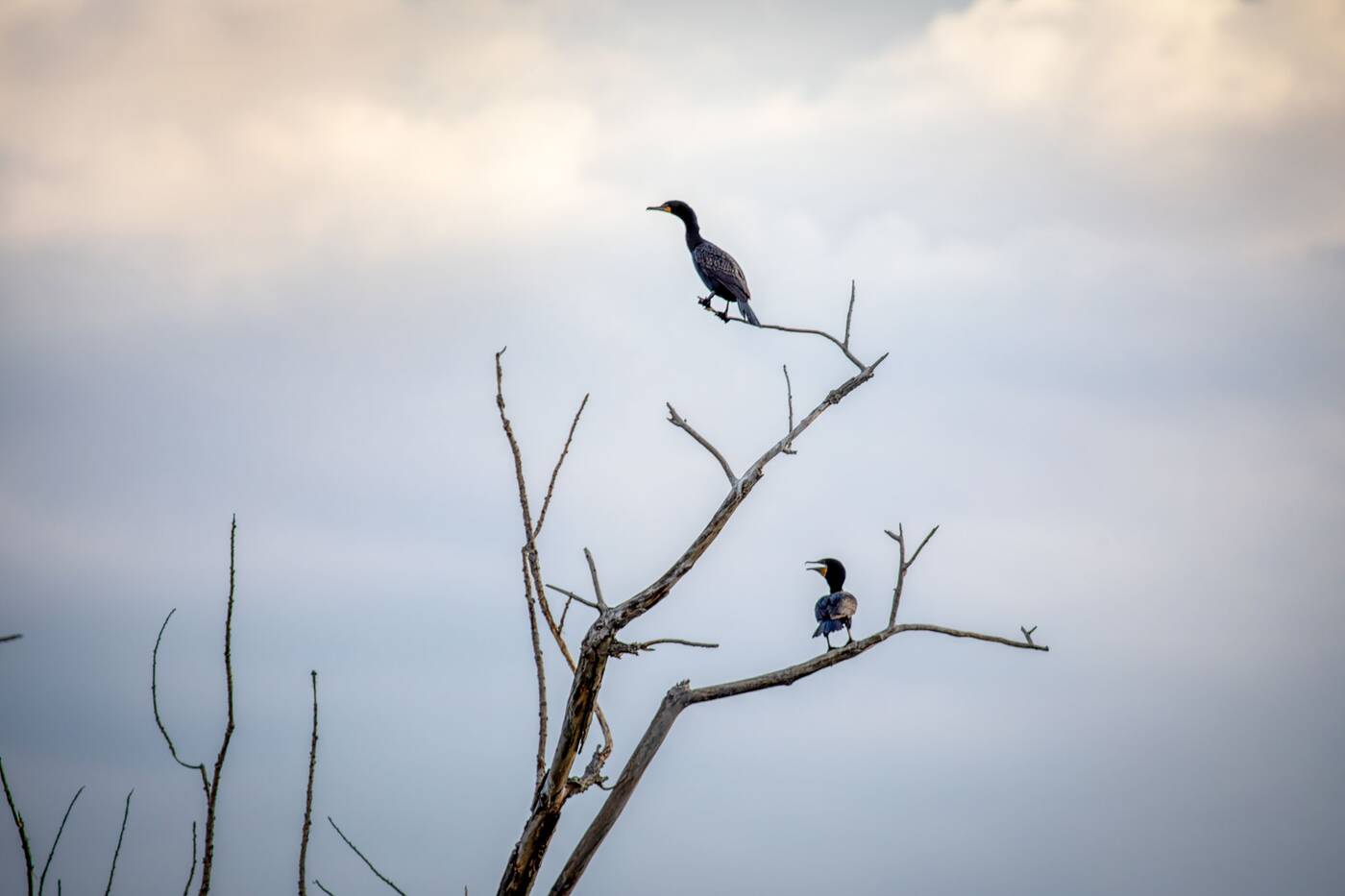 It's a problem that the Toronto and Region Conservation Authority (TRCA) has become aware of in recent weeks, releasing a statement assuring that the authority is "working collaboratively with the City of Toronto to develop a short-term plan to minimize cormorant nesting and mitigate colony expansion this breeding season."

The TRCA intends to fight the colony's expansion with a range of deterrent actions, including shouting humans (I swear I'm not making that up) and other noise-making devices, flying tarps in the tree canopy, and the removal of immature nests. 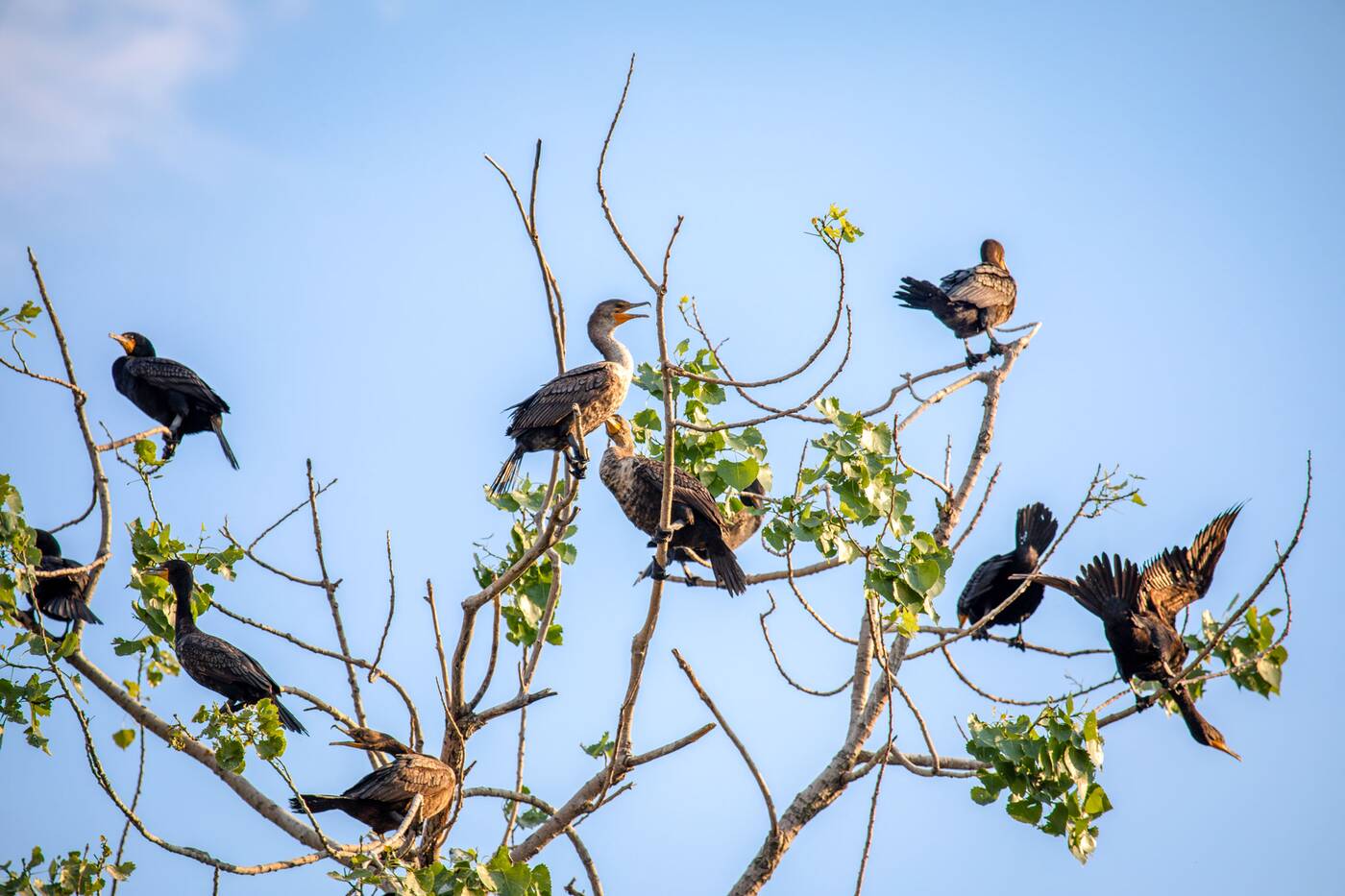 The colony has been under TRCA management since 2009 using these methods, which have been highly successful in promoting ground nesting, but not as effective in preventing damage to trees.

The TRCA says that "since implementing the strategy, we have prevented significant tree-nesting cormorant colony expansion at the park and have increased the proportion of the colony ground nesting from 15 per cent in 2008 to 78 per cent in 2021."

While Tommy Thompson Park is a thriving hub of wildlife, its attractive conditions for animals like cormorants have proven to be detrimental in some aspects. Even with the promotion of ground nesting, much of the spit's tree canopy has been devastated by the birds' nesting habits and the effects of their accumulated guano.

A representative of the TRCA tells blogTO that the association "became aware of the increased nesting activity at the beginning of June and immediately began working on a response with the City of Toronto" to save this portion of the island.

"TRCA is working in partnership with the City of Toronto to implement a short-term plan to minimize cormorant nesting and mitigate colony expansion this breeding season. We are limited in what can be accomplished this season based on the maturity of the nests. However, we are actively deterring cormorants from expanding the current nesting areas until their pressure to expand subsides within the next couple weeks."

The authority adds that "a longer-term strategy will be developed to deter future nesting at Toronto Island Park and encourage ground nesting with the existing cormorant colony at Tommy Thompson Park."

The TRCA's admission that the problem may already be out of hand is concerning. If the management strategy fails, the islands as we know them could be quickly picked clean of tree cover and piled high with chemical-rich bird poop, its trees threatened with a similar fate as those at Tommy Thompson Park.

Some authorities have chosen harsher measures to combat cormorant "hyperabundance," and Parks Canada has drawn the ire of animal rights activists for years with a longstanding culling program to reduce the double-crested cormorant population on Middle Island in Point Pelee National Park.

And by culling I actually mean they shoot them up with guns, something that is now technically legal in most of Ontario, as the provincial government enacted a fall hunting season for the newly-classified game bird in 2020.

While you can legally shoot the birds for a period from September to December in much of Ontario, Toronto by-laws forbid hunting in any form, which means any vigilante bird hunters trying to save the Island from a poopocalypse will have the law to deal with, facing a maximum fine of $5,000.

And don't think you can beat these hunting rules by sailing a bit further out into the lake, as a city statement said in 2020 that "The city's boundaries extend into Lake Ontario to the United States border and east and west to the borders of neighbouring municipalities."