A small park in Toronto has quite the history, going back over 270 years to a time when the site of our modern metropolis was a quiet, natural landscape in the midst of bloody early European colonization.

This dark period of colonialism marked the beginning of one society at the price of another's near-end, a topic many Canadians are still coming to terms with as past bloodshed and horrors continue to come to light.

And yet, the vast majority of people walking the Exhibition Place grounds are unfamiliar with a reminder of this pre-Toronto era hiding in plain sight.

Fort Rouillé was a 18th-century French trading post, constructed at a time when the land that would one day be known as York and later Toronto was part of New France, a massive portion of modern-day Canada and the United States stretching from the North Atlantic to the Gulf of Mexico.

Built by the French in 1751, the fort was destroyed only eight years later, its garrison burning the fortifications to the ground and fleeing after the position was exposed by a critical French defeat in the Battle of Fort Niagara, fought during the French and Indian War. 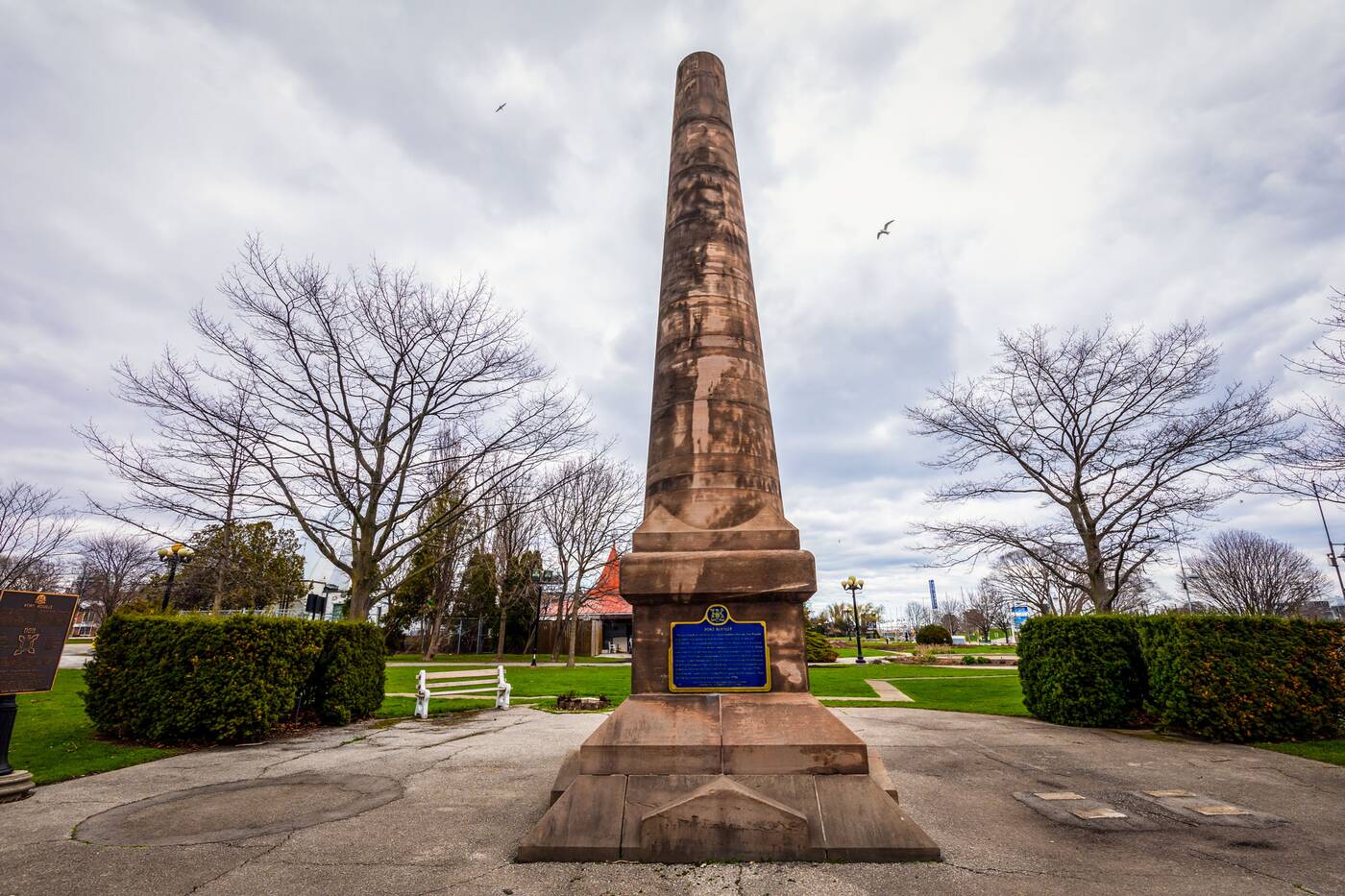 An obelisk is the most visible reminder of what once stood in this area of what is now Exhibition Place.

Few traces of the fort remained into the founding of York and the City of Toronto that followed, aside from earthworks like mounds and depressions that would be filled in during the late 19th century as the grounds and surrounding area were acquired by the city for the Toronto Industrial Exhibition, now known as the Canadian National Exhibition. 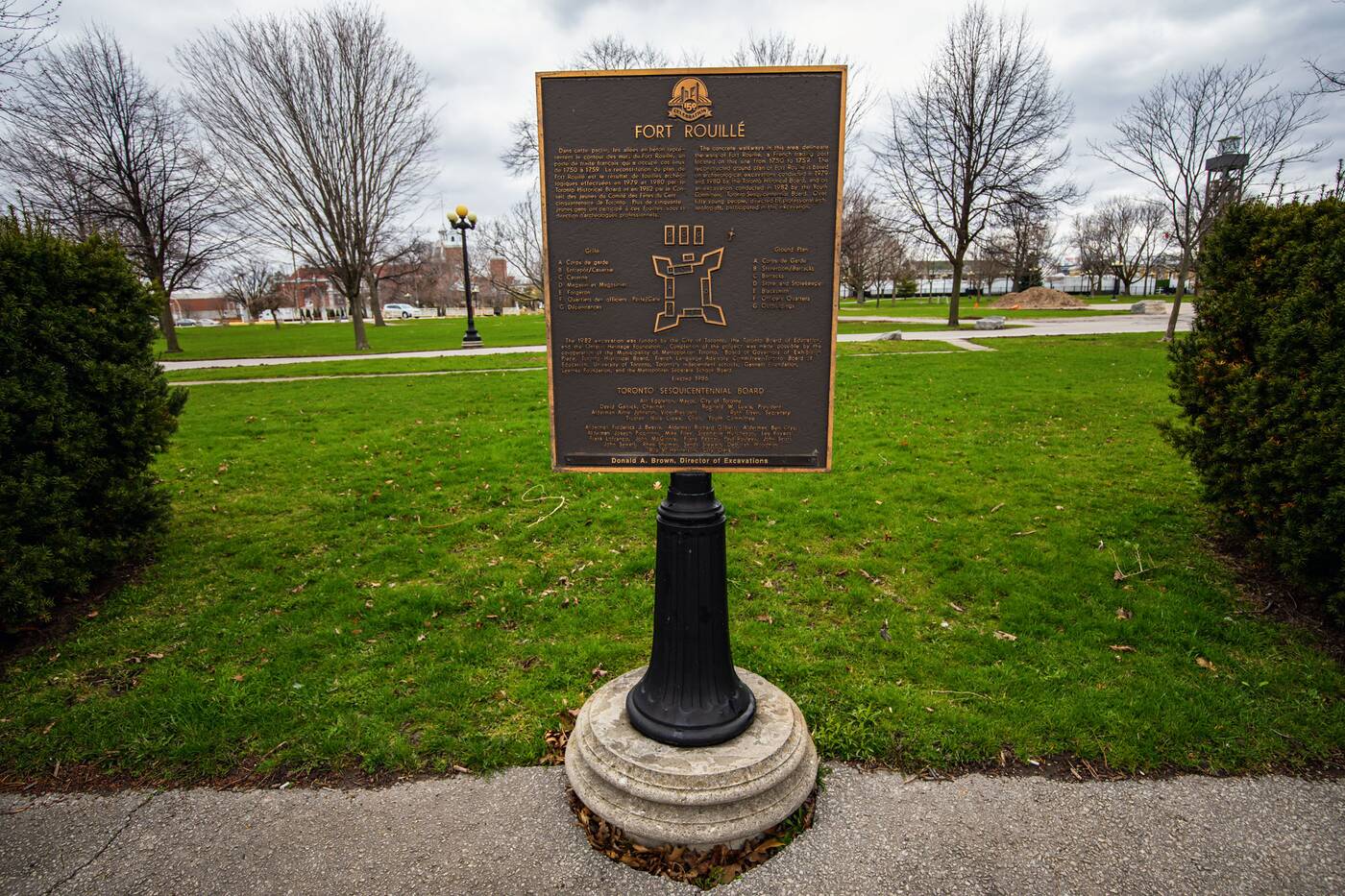 In the two years before the Industrial Exhibition's founding, the city erected reminders of a colonial-era trading post on the site with an obelisk and a large granite boulder inscribed with a brief history of the fort. 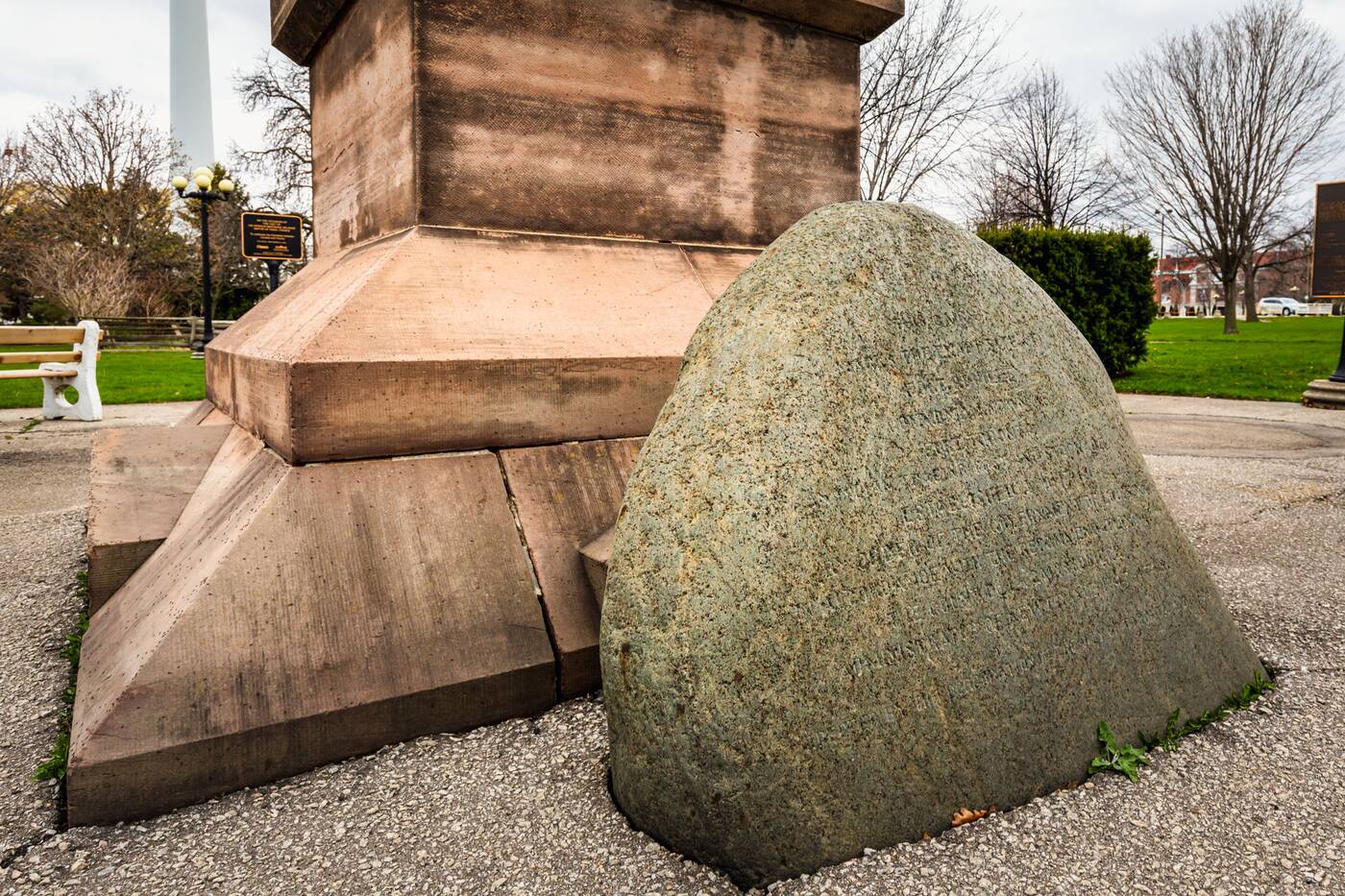 The inscription on the boulder is barely legible today.

A later plaque was added by the Archaeological and Historic Sites Board, a predecessor to the Ontario Heritage Foundation, in 1957. 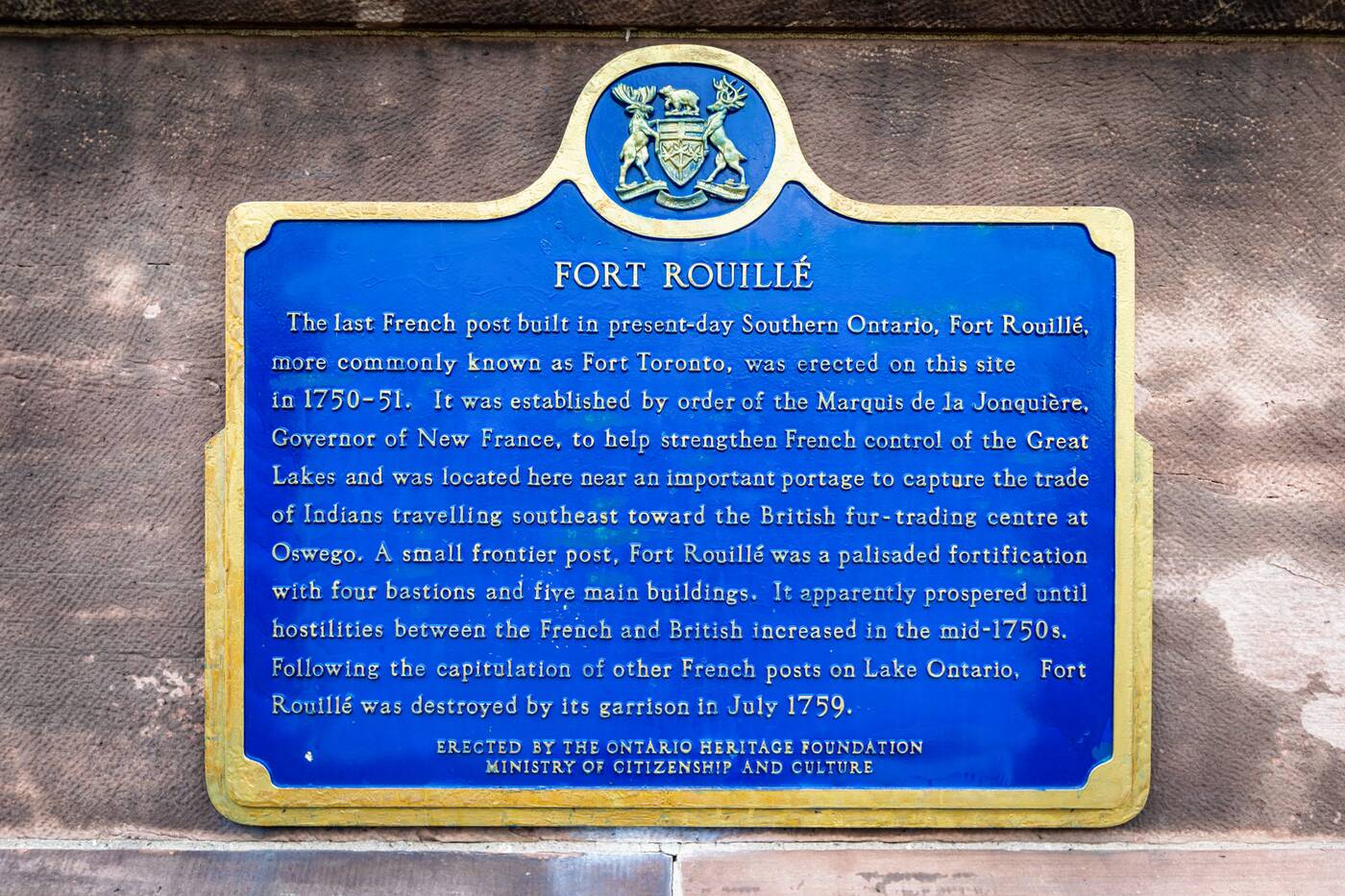 Plaque mounted to the obelisk at the centre of the former fort site.

Roughly a century after the first monuments to the fort were erected, the Toronto Historical Board organized an archaeological excavation of the site, carried out in 1979-80, with follow-up digging a couple of years later by the Youth Committee of the Toronto Sesquicentennial Board.

It was only following these excavations that the former outline of the fort was restored, built in concrete marking the locations where wooden stockade walls once protected the trading post's inhabitants. 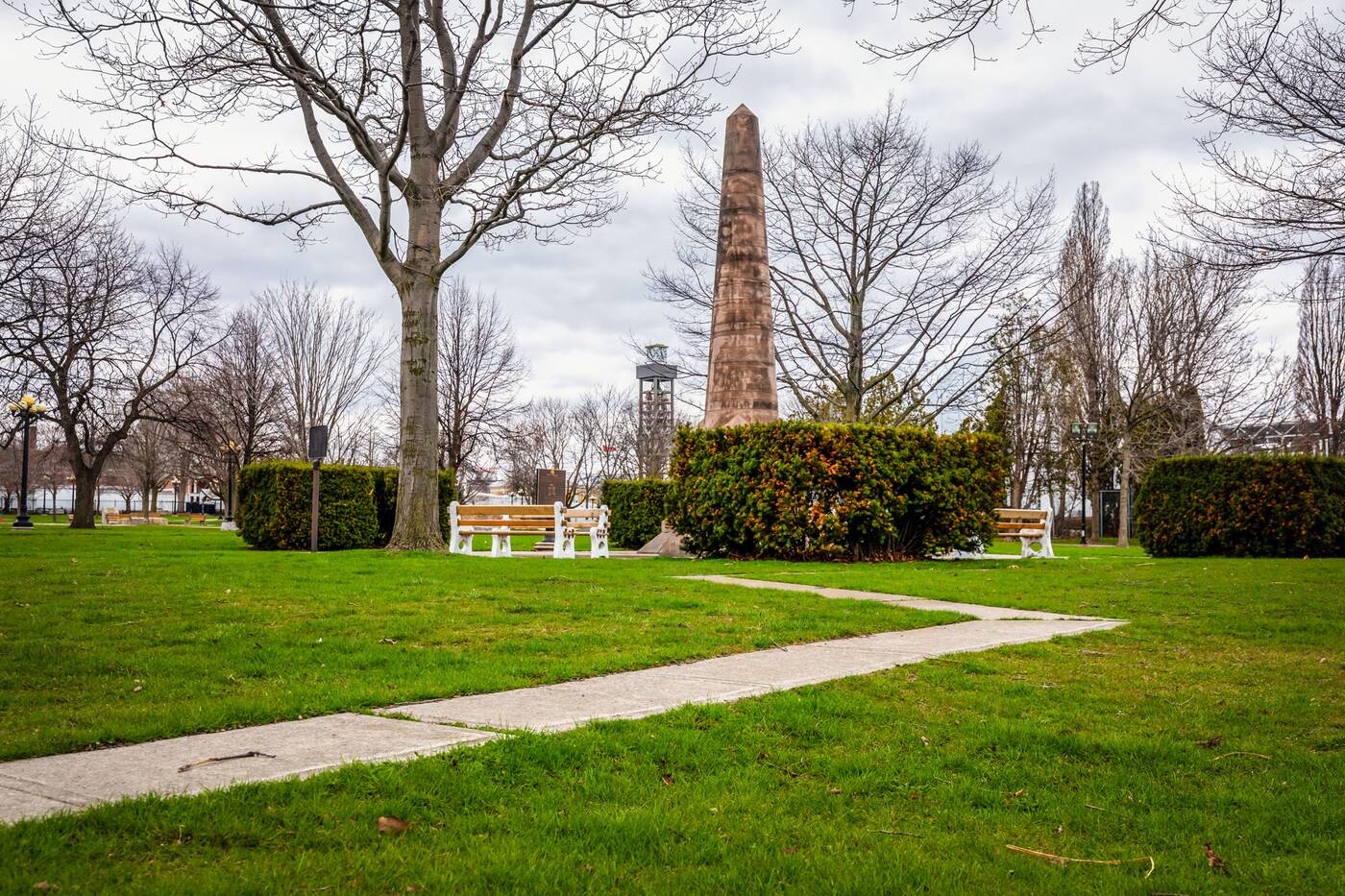 The concrete outline marks the position where wooden stockade walls once rose.

Until recently, you could also find other bits of military history on the former fort site, with a British cannon and mortar from the mid-19th century on display. It is unclear where these military relics are stored today.

And it's not the only bit of pre-Toronto history on this site, with the oldest surviving building in the city preserved right next door to the fort's reinstated outline. Scadding Cabin, a 1794 log cabin, is still roughly a half-century younger than the now-lost fort it stands beside, but stands perfectly preserved.

The fort used to have another memorial in the form of Fort Rouillé Street, a north-south residential street that once ran from Springhurst Avenue in the north to the waterfront, terminating at what is now the site of the Liberty Grand.

Almost the entirety of this road, along with many other streets west of Dufferin, was mostly erased from existence during an early 1900s expansion of Exhibition Place. 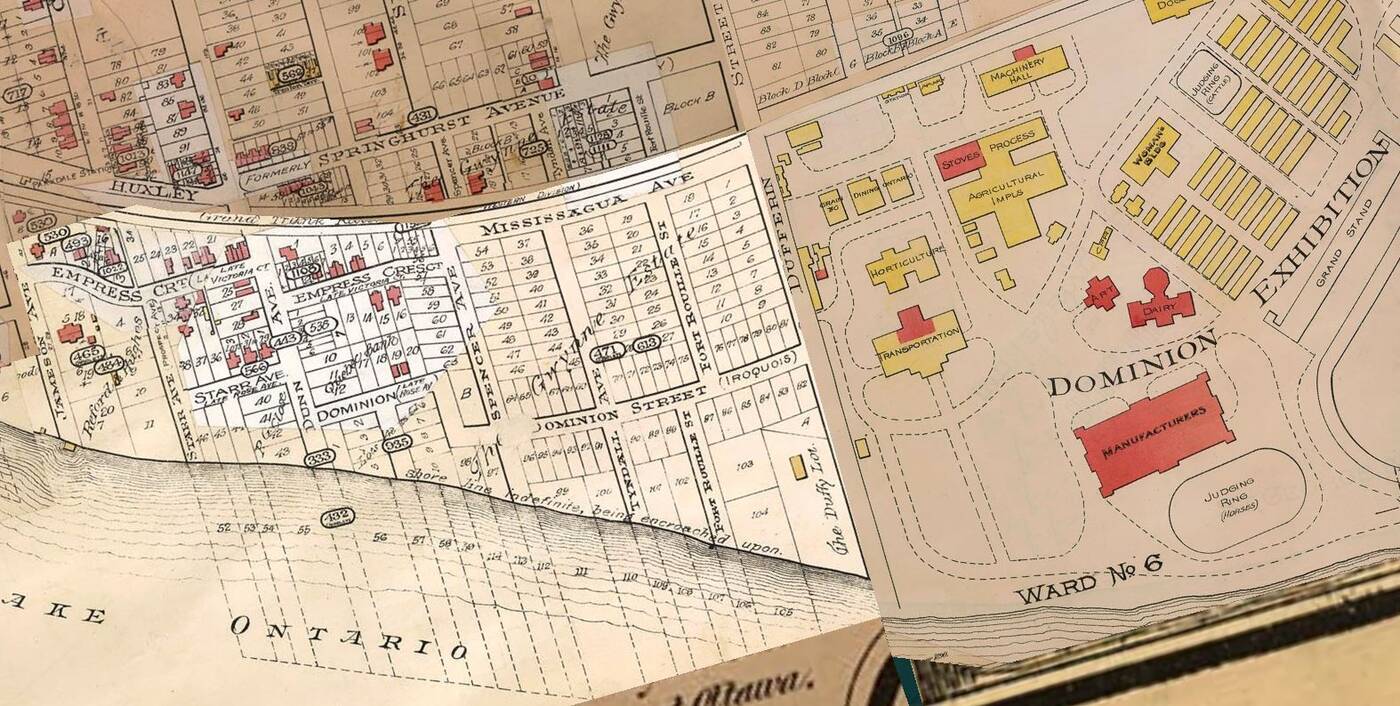 Fort Rouillé Street (the first street west of Dufferin) once terminated near the site of the former fort, but only a small stub exists today. Image via Toronto Historic Maps.

Only a small stub of Fort Rouillée Street exists today, the disconnected stretch running for approximately 50 metres south of Springhurst Avenue, dead-ending at the rail corridor.