Here are the things each Toronto ward complains about the most

Toronto loves to complain about pretty much everything. Whether that's long lines, brutal weather, TTC woes, or whatever the anger-inducing flavour of the month is, complaints are a part of life in Toronto, especially for the 311 operators fielding all sorts of ridiculous complaints.

City statistics wizard Matt Elliott scraped through data to find the most-complained-about issues across Toronto from Jan. through Oct. 2021, breaking down the complaints by ward in his latest newsletter to determine what issues have people dialing up 311 in the city.

Apparently, Toronto residents' top concern is broken garbage bin lids, the number one reported issue to 311 in nine of the city's 25 wards.

The almost 14,400 reports of broken garbage bins in just ten months can be explained in greater detail in a recent deep-dive article from the Toronto Star, but one of the standout explanations is bins reportedly being crushed by the claws of garbage trucks. 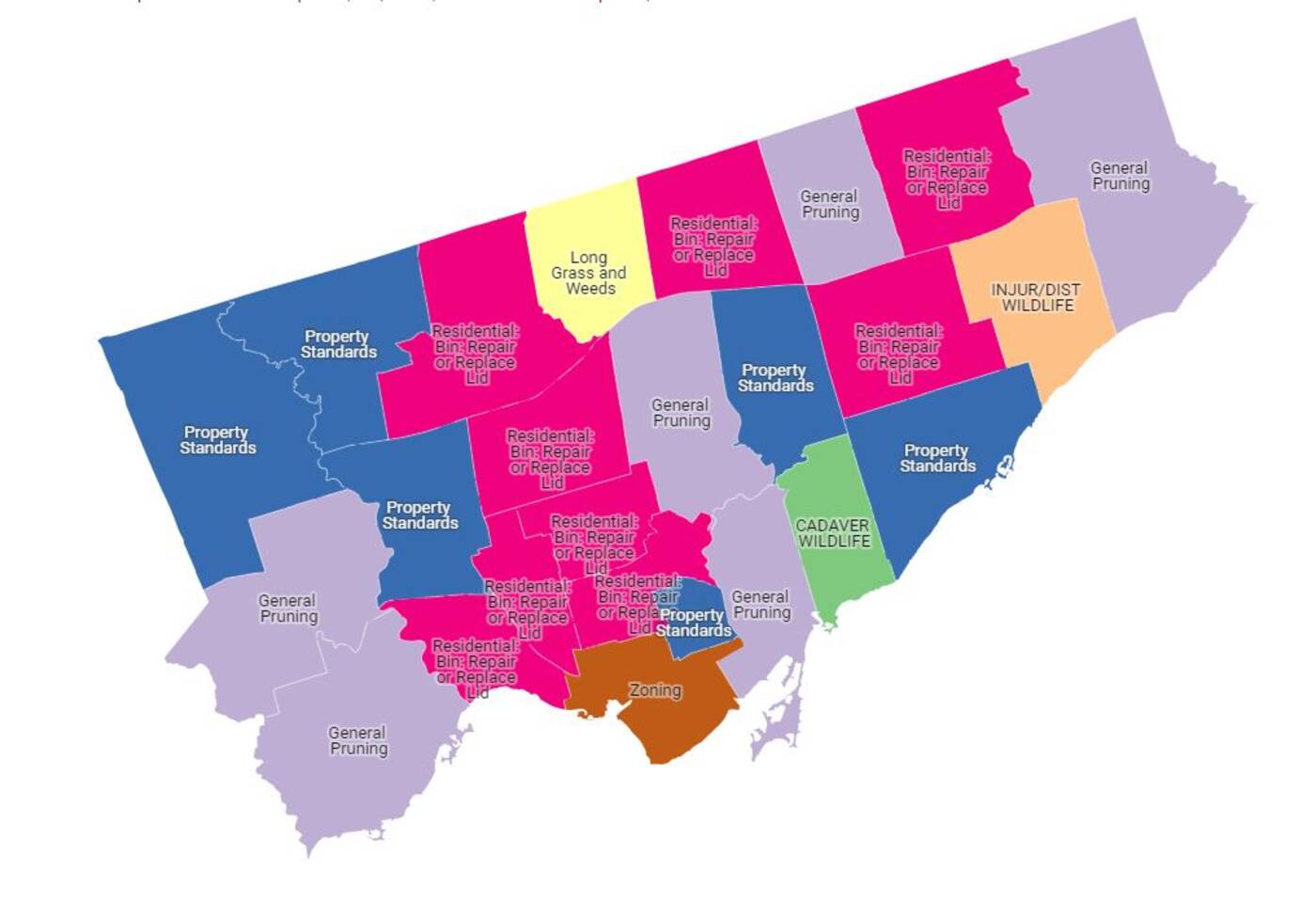 Breakdown of the most common complaints to 311 by ward. Image by Matt Elliott.

It seems people really care about the look of their neighbourhoods in parts of the city along the Don Valley and in the suburbia of Etobicoke, with the pruning of vegetation ranking among the top 311 complaints in six wards, and the second biggest complaint in another three wards.

Similarly, long grass and weeds landed as the top complaint in Ward 18 - Willowdale.

Vegetation is a relatively inconsequential thing to be complaining about when you look at some of the other big ones on the list.

Ward 19 - Beaches-East York had 788 reports of wildlife cadavers, or roadkill, in just the first ten months of 2021, the top complaint in that ward. Sadly, the ward's second-greatest complaint to 311 was for injured wildlife, with another 784 instances.

In just the top three complaints from each ward, there are a staggering 4,581 dead and 5,131 injured animals.

Ward 10 - Spadina-Fort York stood out as the lone ward where zoning issues were the most complained about, which is not too surprising in an area of the city where intense high-rise development is shaking up established neighbourhood skylines.

Property standards were the biggest concern in the remaining six city wards, with residents calling 311 to demand the enforcement of owners required to repair and maintain their properties. Four additional wards had property standards as their second largest complaint.