Someone visualized the future of Toronto and it looks crowded

A Toronto man has created a 3D visualization showing how dramatically the city will change over the next 10 years and its generating some discussion.

Toronto's skyline has changed significantly over the last few years and there are more skyscrapers on the way.

Stephen Velasco, a digital marketer, with a huge interest in the city and urban landscape has long been interested in the changes to the city, and recently created Future Model of Toronto to help visualize how it might someday look.

"From an early age, I've always been interested in cities and urban development and in tall buildings," Velasco tells blogTO. "So it's always kind of been a passion of mine, and something that I really enjoy."

In fact, Valasco's work creating a cardboard model of Toronto when he was a high school student was featured on blogTO back in 2011.

In Future Model of Toronto, he gathers information from the City of Toronto on current and planned development projects and makes 3D visualizations with a program called SketchUp. He started the project in 2017, but in 2020 he had more time to work on it and publish his visuals on Twitter.

The resulting graphics show just what the city would look like in a kind of Manhattanization (construction of many tall buildings and the rapid change of the urban landscape) of Toronto.

The Manhattanization of Toronto and resiliency of Toronto real estate continues, with little signs of slowing. Visible in this image, development in the Downtown Core as it appears toward the end of 2021. #Toronto #CityofTO #future #torontorealestate pic.twitter.com/9FojOpmIKE

A recent Reddit post had people discussing the benefits and drawbacks of the projected growth but Velasco says he simply wants to visualize the change.

"I'm definitely more on the side of just leaving the discussion open for others," he says.

"But I think what is really nice is to at least to visualize how much development is happening in the city, because it's one thing to read about it or see dots on a 2D map and it's something else entirely to see it produced in a 3D model like this, where you can really get a sense of the scale of these buildings relative to what's already there." 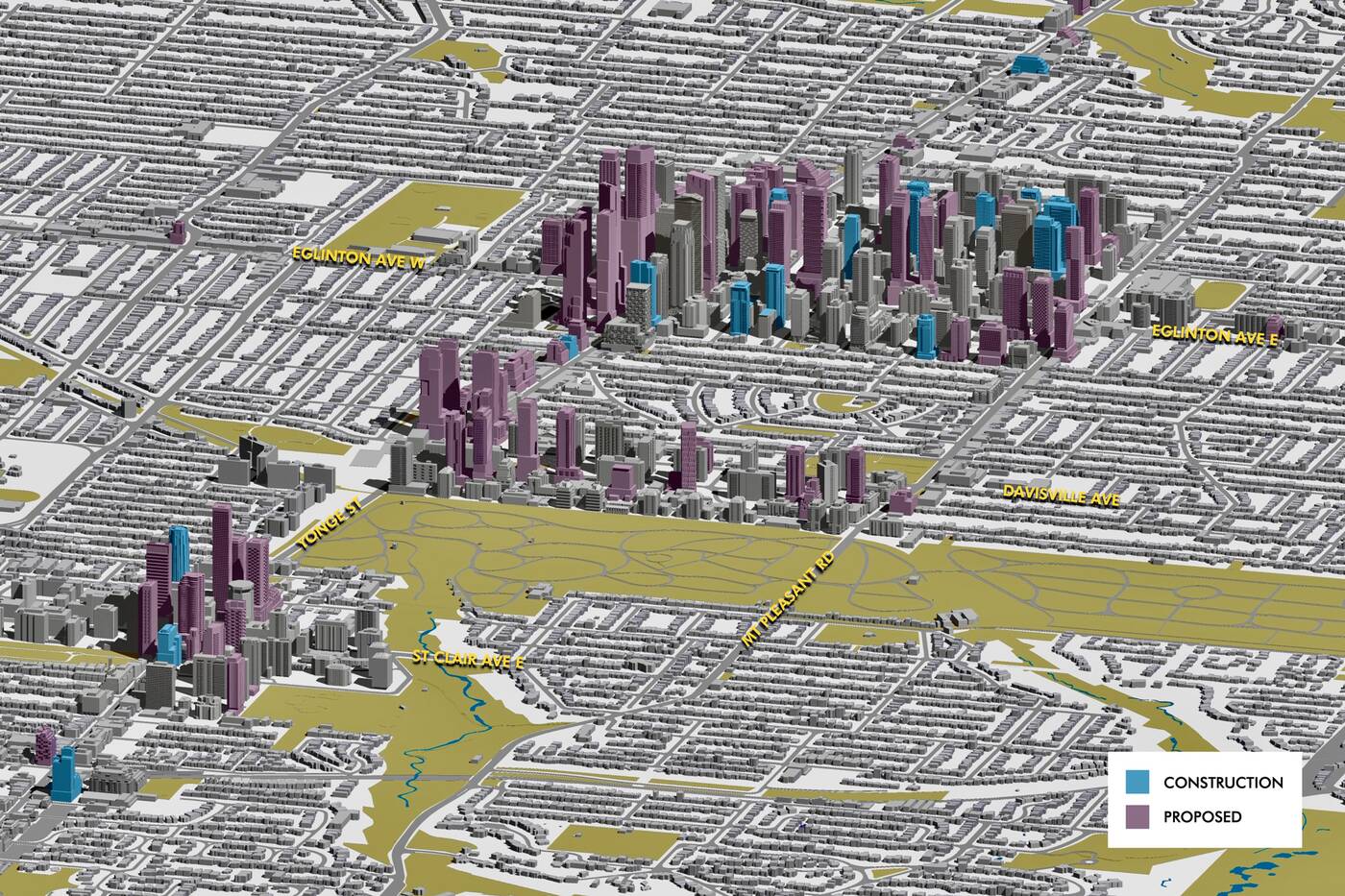 A visualization of Midtown Toronto shows proposed buildings in pink and towers under construction in blue.

Although it started as a hobby, Velasco offers custom graphics to showcase projects companies have completed as part of their portfolio.

He now has a couple of pre-construction real estate brokers licensing his models. They are using the models to show clients what development is happening and projects in context.

"So one of the applications, of course, is for people buying pre-construction. One of the considerations they have is their view that might be obstructed in five, ten years," he says. "So these models are a way to visualize that development and also show clients what projects are being proposed around them." 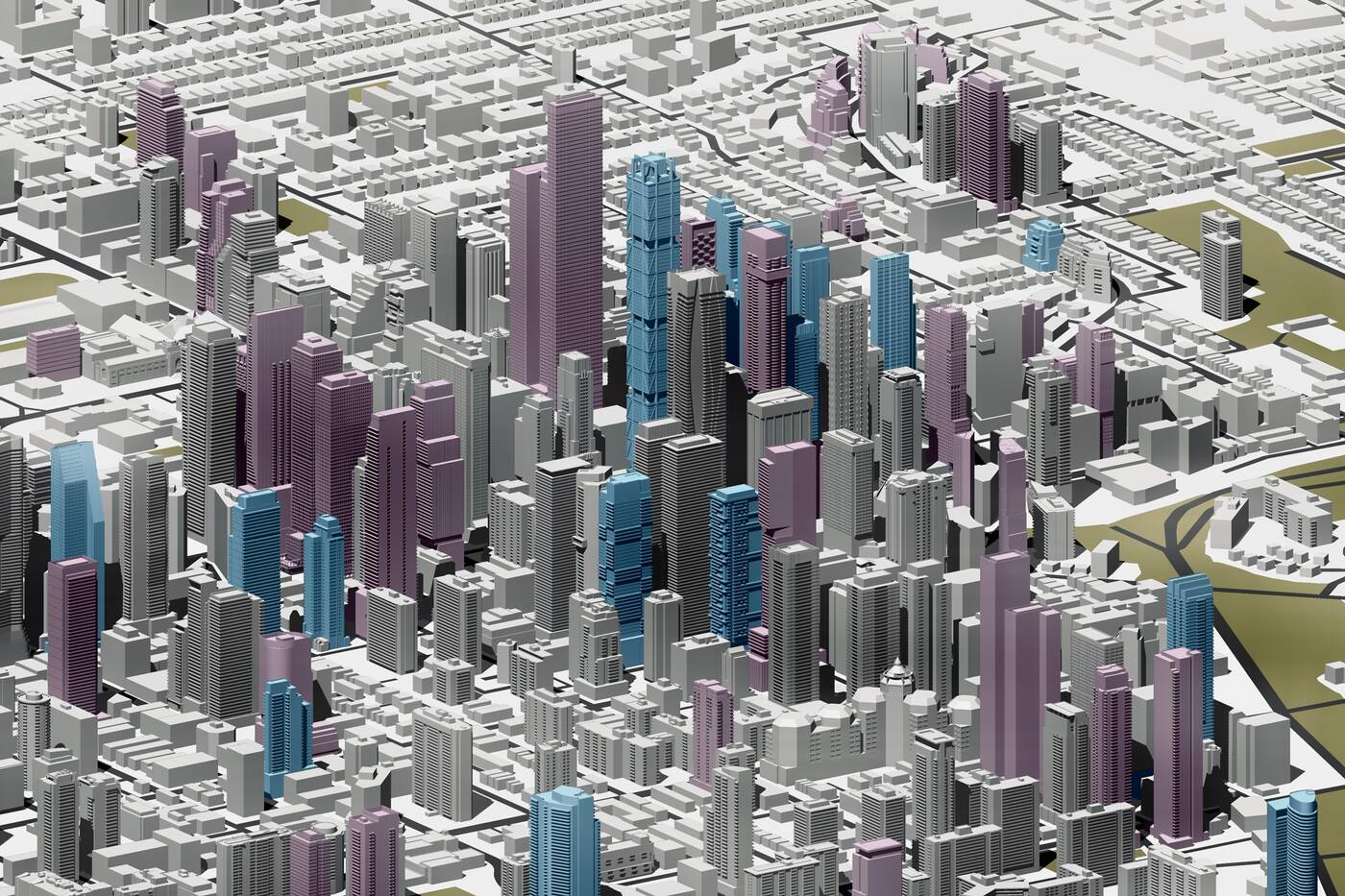 Bloor and Yonge is set to change a lot in the next 10 to 20 years if projects are completed.

While some people on Reddit don't like all of the development and others welcome the intesification, Velasco is simply happy his model is starting a conversation.

"As long as it's fueling a discussion about the future of the city, and also the development that's happening, I think it's a positive thing," he says.