Toronto skyscrapers keep getting taller and more are coming

More than 100 years ago, a Toronto news writer warned of the danger of too many skyscrapers crowding the city skyline.

That writer couldn't have known just how much Toronto would change. In an article in the Toronto Star Weekly on April 9, 1910, an unnamed journalist wrote a lengthy story outlining the reasons Toronto shouldn't "go sky-scraper crazy."

"Undoubtedly Toronto and the other large cities of Canada will in the near future have many tall buildings. The advantages of these structures are many, as has been pointed out. They represent the modern idea. We must have them," an unnamed journalist wrote in an article titled How Will Toronto deal with the sky-scraper problem?

"But it is not necessary to have them too high and massed together in one unlovely group." 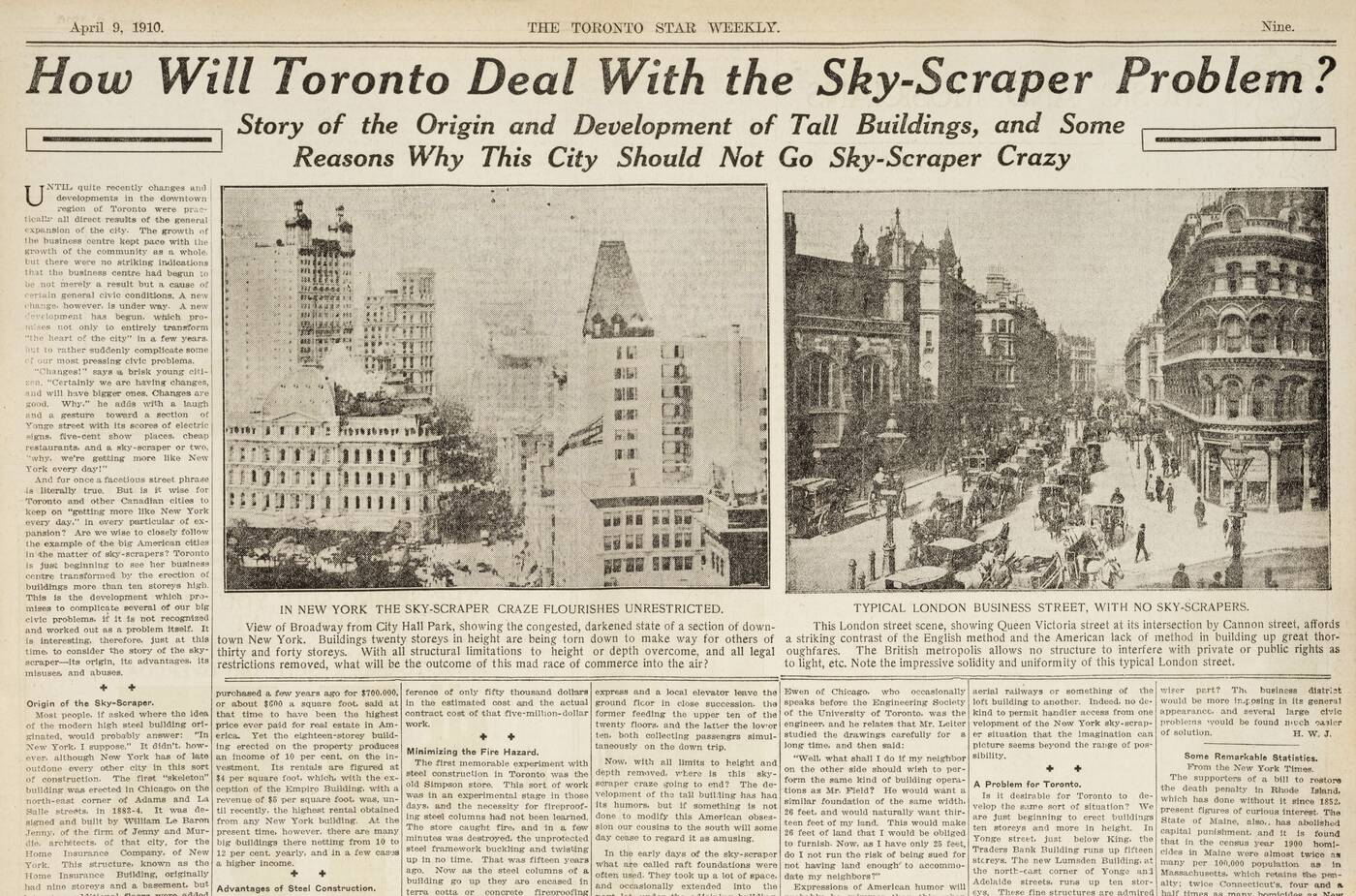 In 1910, the city was just starting to see buildings of 10-storeys, and was watching highrise buildings go up in New York and Chicago.

What was thought to be a skyscraper in those days, around 16-storeys high, pales in comparison to Toronto's tallest building, First Canadian Place at 72-storeys and 355 metres tall (to the tip, 298.1 metres architecturally).

In fact, Toronto has seen a boom in skyscraper building (defined as 150 metres or taller) from around 2004 according to data gathered by the Council on Tall Buildings and Urban Habitat (CTBUH).

Between 1978 and 2004, only five 150-metres-plus buildings were completed in the city, says Daniel Safarik, assistant Director, research and thought leadership editor, CTBUH Journal. 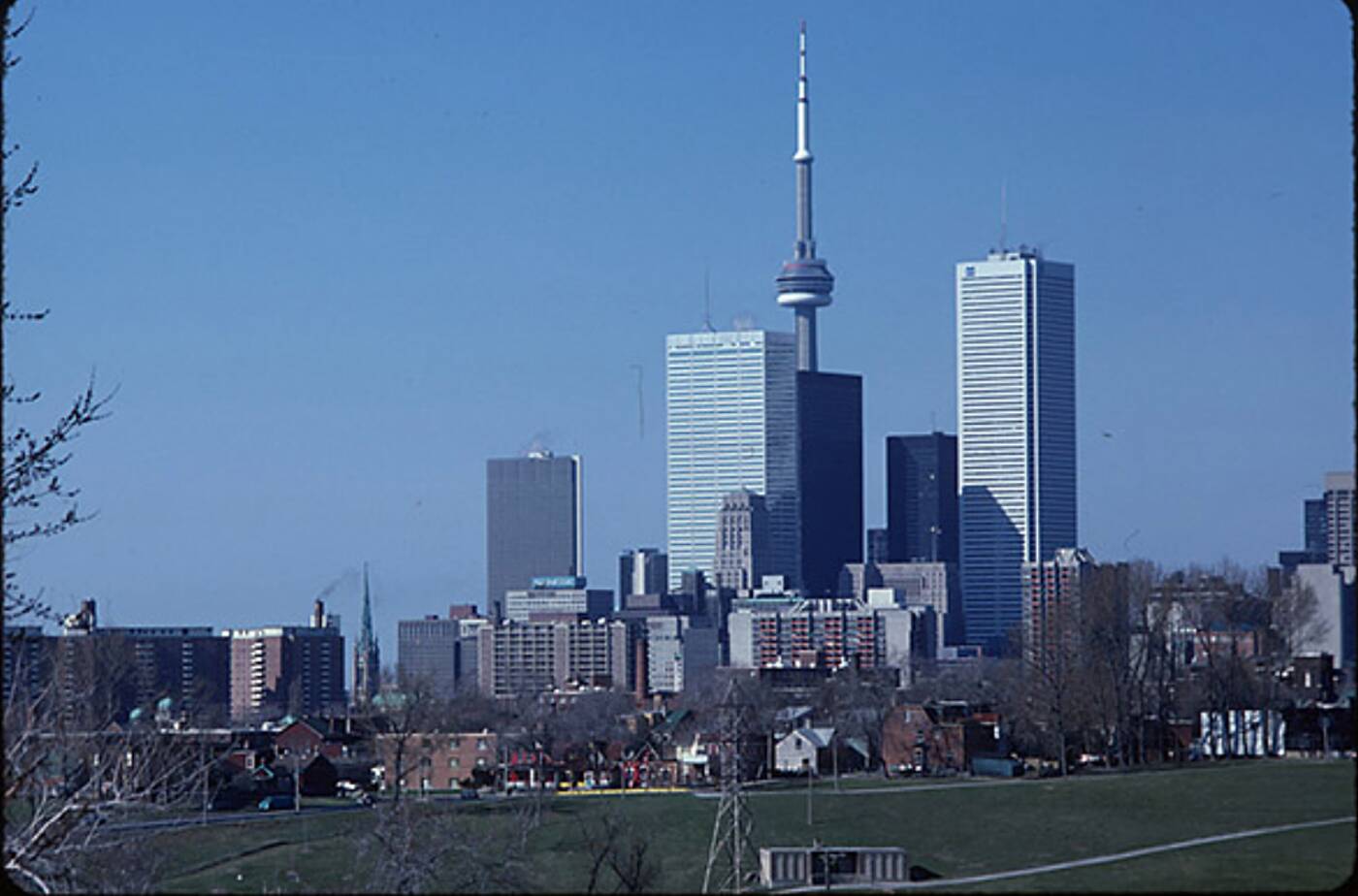 The city looked much different in 1983 from Riverdale Park. Photo via Toronto Archives

Safarik notes that they don't have a formal definition for "skyscraper" or even "tall building," because context is very important to those descriptors.

The Home Insurance Building built in 1885 in Chicago is considered by some as the world's first skyscraper at 42.1 metres.

But CTBUH set a minimum height of 150 meters for the purpose of making broad statements about tall buildings worldwide.

"In other words, we're pretty confident we have a count of all the buildings of this height and higher," he says. "But our database includes thousands of shorter buildings."

In Toronto, the first skyscraper built over 150 metres was the TD Tower in 1967. Currently, the city has 68 skyscrapers and a further 30 under construction.

Toronto's soon-to-be tallest building, The One, will be 85-storeys tall.

The City of Toronto doesn't keep records on the total number of high-rise buildings built since the early 1900s but there is a history of tall buildings in the city.

When it comes to the future of Toronto's skyline, there will likely be many more tall buildings coming.

"There is not a 'capacity' for tall buildings but instead a constant conversation about the evolution of the city among all of the people and parties involved in creating the city in which we all live, work and play,” Michael Wright, manager of planning research and analytics for the City of Toronto tells blogTO.

Building height is considered in a broad context, including impacts on neighbouring properties and communities, environmental sustainability, community services and facilities needs as well as infrastructure.

"This occurs through the review of individual Planning applications and area studies. Building heights are regulated by the City's Zoning By-laws, and the Official Plan guides the long-term growth management of the city."

As for the writer in 1910, his desire to have only buildings of eight or 10 storeys in height instead of a bunch of 12 to 20 storey buildings clustered around lower Yonge Street, never came to pass.