In what might be the most high-profile pregnancy news since Jennifer Lawrence, Kylie Jenner and Olivia Munn all confirmed they were expecting within like, a week of each other, the Toronto Zoo has announced that its 29-year-old Sumatran orangutan Sekali is due to give birth in April.

And the father? Her 15-year-old boyfriend Budi.

But don't call Sekali a cougar; Like I said, she's an orangutan. She also didn't choose to take a lover roughly half her age. Rather, the zoo famously paired the duo up at the recommendation of the AZA Species Survival Plan to help future their critically endangered species.

The sneaky love trap worked: After being set up in February of 2021, Budi and Sekali are said to have "engaged in breeding." The zoo announced on Thursday that the parents-to-be "enjoy each other's company" and are "continuing to choose to spend time together during this pregnancy."

29-year-old Sumatran orangutan Sekali and 15-year-old Budi were paired at the recommendation of the AZA Species Survival Plan, and we are thrilled to further contribute to the future of this critically endangered species. pic.twitter.com/wDXO6qOjmq

Due in April, their offspring will be Sekali's second (her first, 15-year-old male Kembali, still lives at the Toronto Zoo), while Budi will be a first-time father.

Juicy twist: According to a Facebook post from 2017, Budi and Kembali are actually half-brothers. Their father, Molek, was baby daddy to both Sekali and the famous 54-year-old Puppe (Budi's mom) around the same time. He passed away in 2010 at the age of 32.

"Both Sekali and Budi were born at the Toronto Zoo and the pair was first introduced in 2017, but Budi was not yet fully mature," wrote the zoo in its pregnancy announcement today.

"Now fifteen years old, Budi has all of the characteristics of a mature male orangutan, and interactions between him and Sekali were very positive when the pair was reintroduced in February 2021." 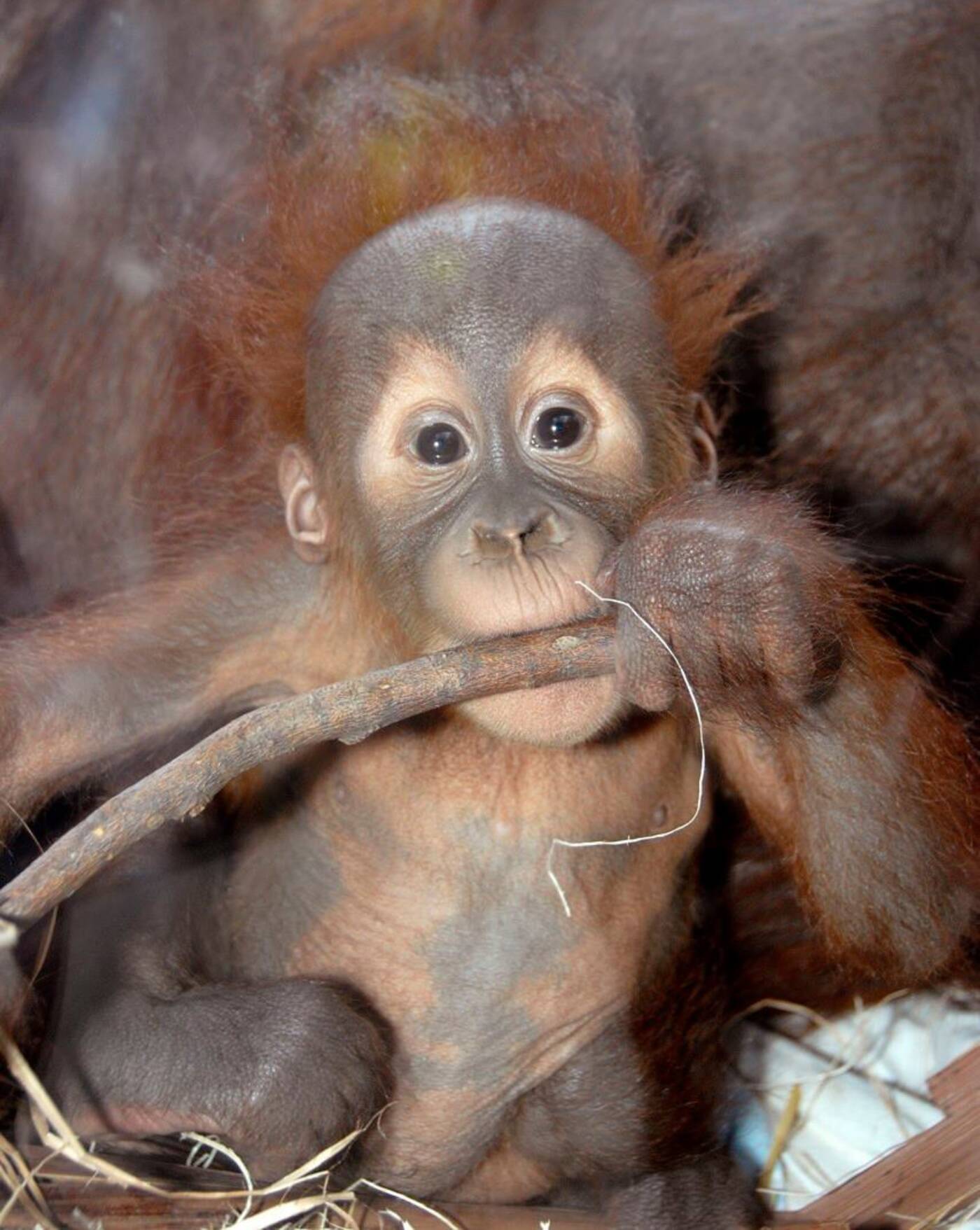 This adorable baby picture of soon-to-be first-time-father Budi was shared on his 12th birthday in 2018. Photo via Toronto Zoo.

The zoo explained that orangutan pregnancies are about a month shorter than in humans, averaging 245 days, or 8 months, and that their babies "are also much smaller, generally only 3.75 pounds at birth."

Aside from that difference, orangutans have remarkably similar reproductive characteristics to humans — according to the zoo, an over-the-counter pregnancy test can be used to detect pregnancy in orangutans. Sekali is even receiving prenatal vitamins designed for people.

Her offspring will be the first new Sumatran orangutan to be born at the Toronto Zoo in 15 years, and the zoo says it is "thrilled to further contribute to the future of this critically endangered species."

"Fewer than 15,000 Sumatran orangutans can be found in the wild... The world has lost an estimated 120,000 orangutans in the past decade, primarily due to habitat loss. Every day acres and acres of the Sumatran rainforest – the orangutan's natural habitat – is removed to make way for oil palm plantations," writes the zoo.

"The Toronto Zoo currently houses the only Sumatran orangutans in Canada. As part of the AZA Sumatran Orangutan SSP, thirteen orangutans have been raised at your Toronto Zoo since 1974, with this upcoming birth being the first since 2006."