A series of viral videos portraying one woman's hellish experience living at the notorious ICE condos in downtown Toronto appears to have opened a can of worms — figuratively speaking, of course, though few would be surprised at this point to find an actual can of worms in the complex.

Current and former residents of the two-tower residential highrise development have been contacting blogTO in recent days following a report on the aforementioned TikTok series to share tales of their own.

Some merely want to back up existing claims of complete chaos at 12 and 14 York Street, while others have additional complaints that run the gamut from annoying to downright terrifying. And gross. There's a lot of gross.

We have yet to share any of these reports, as they cannot be adequately verified, but a quick Twitter search paints a pretty good picture of how people generally feel about ICE — not only now, but long before Kylene Loucks went public with her damning video evidence.

On Sunday, Toronto police reported a "suspicious incident" in the York Street and Lake Shore Boulevard area, writing in a release that "a large quantity of blood" had been located "in the hallways and elevator of a residential building."

Police later told blogTO that they would not be naming or providing an exact address for the building in questions, but Torontonians automatically assumed it was one of the ICE condominium towers.

To be fair, the complex has been linked to a number of shootings, crazy ghost hotel parties and other violent happenings over the past few years.

And as it turns out, according to multiple people in the complex, the suspicious elevator incident did in fact take place inside the Ice Condos II at 14 York.

Neither police, building management or the ICE condominium board will verify this (the latter two entities have yet to reply to a request for comment at all), but a resident of the building in question sent blogTO a photo on Tuesday evening that they say was taken on the 50th floor. 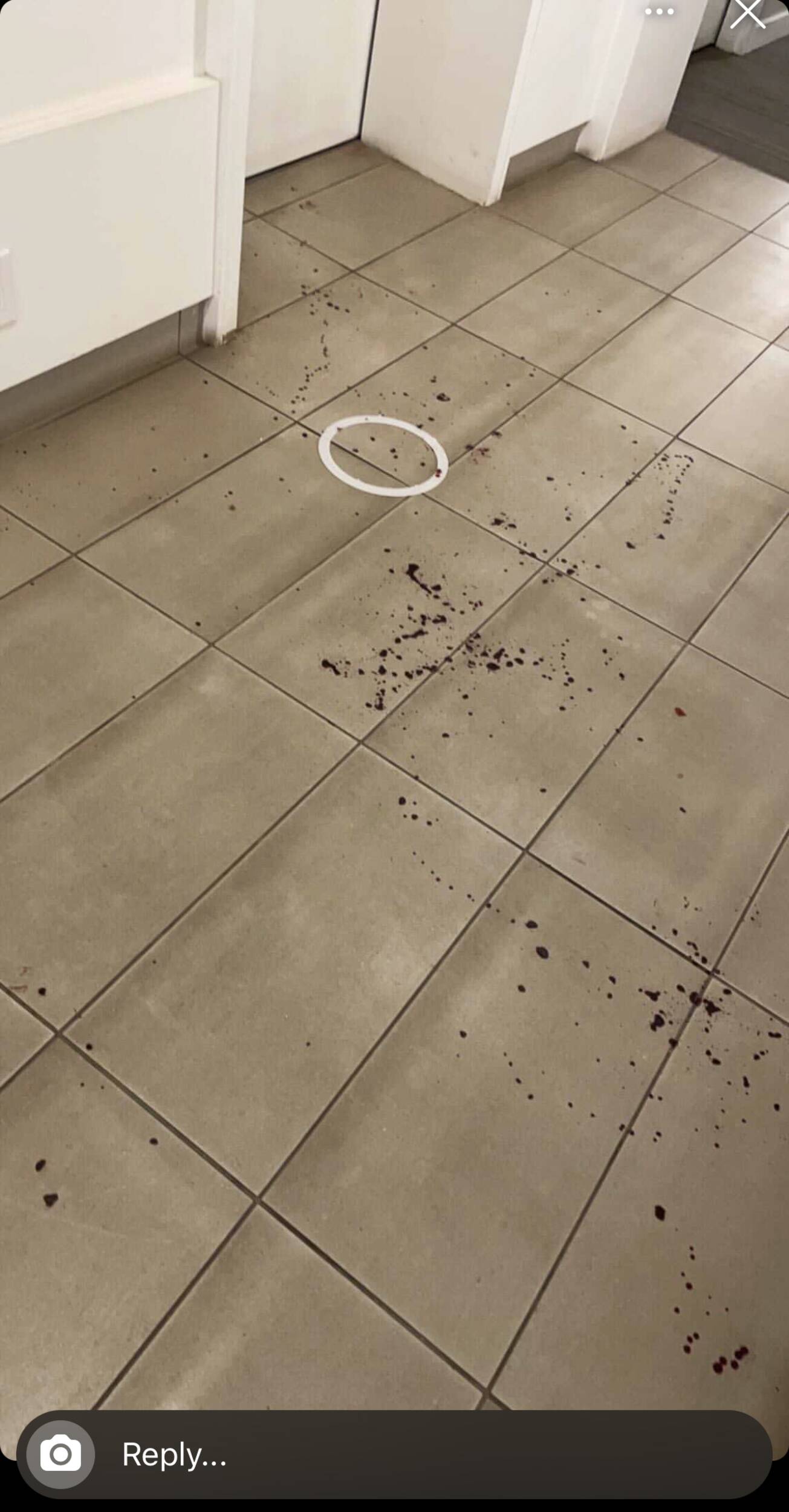 This image, taken Tuesday evening, was sent to blogTO via a direct message on Instagram from someone who says they're a resident of 14 York Street. The source requests their name be withheld.

Captured more than two days after police said the suspicious incident took place, the photo shows a hallway in front of an elevator covered in splatters of blood.

"Blood still there and they haven't cleaned at all yet, after days later," wrote the resident, who does not want to be named for obvious privacy reasons.

The resident says management hasn't addressed the bloodvator issue with people in the building yet, but they did send along another email in regards to a seemingly different incident that took place on the same day, Sept. 5.

"Dear Residents, We would like to provide details of an incident at ICE 2 on Sunday, Sept. 5, associated with a short-term rental (STR) unit," reads the email, as seen in screenshots sent to blogTO.

"A short-term rental guest pulled a fire alarm and vandalized some of the common elements including fire safety equipment. No one was injured, and Toronto Police Service arrested the individual. We have received many emails from residents expressing concerns about their safety and looking for answers from management." 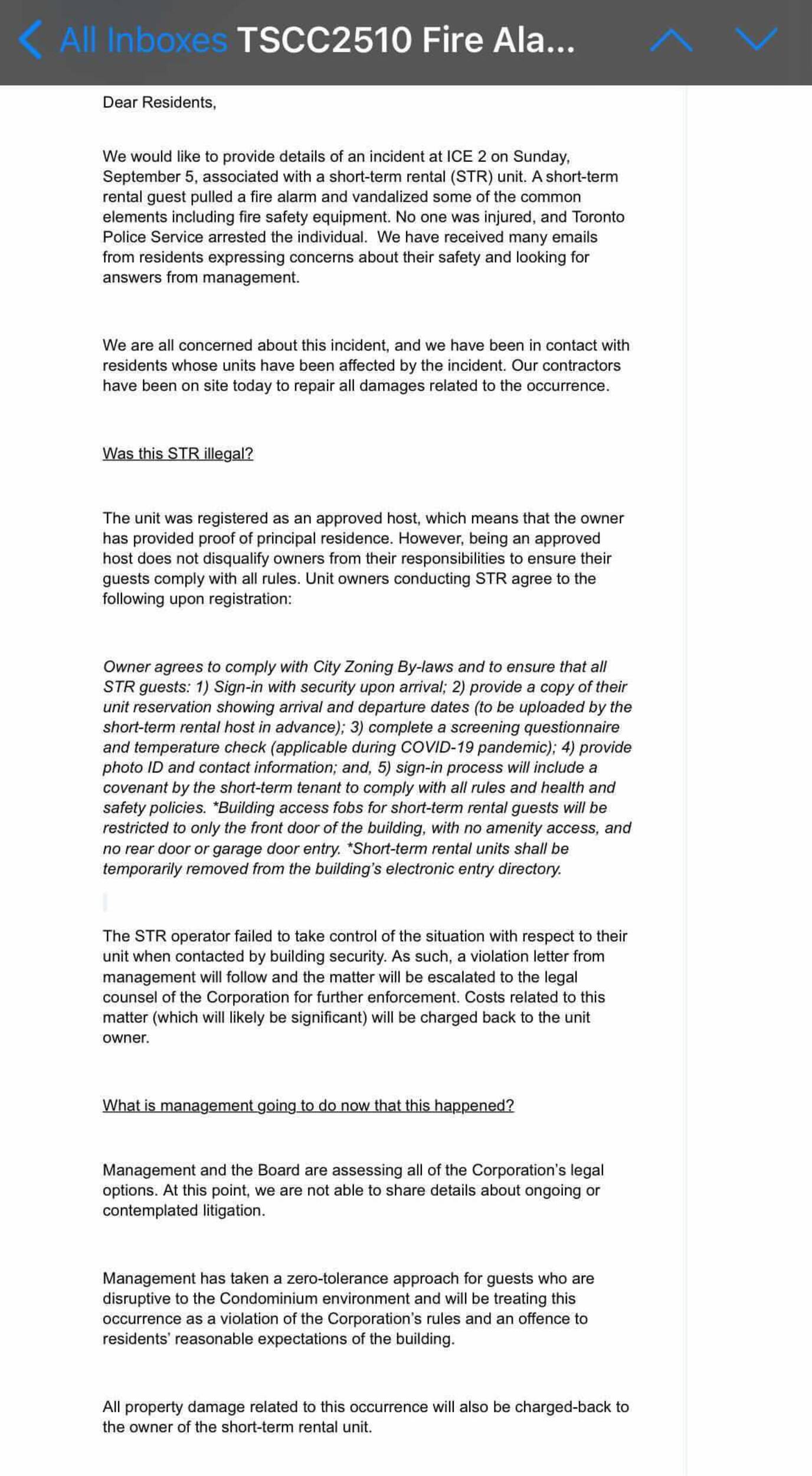 The email goes on to say that management is "concerned about this incident" and that they have been in contact with affected residents.

"The unit was registered as an approved [short-term rental] host, which means that the owner has provided proof of principal residence. However, being an approved host does not disqualify owners from their responsibilities to ensure their guests comply with all rules," the letter continues.

"The STR operator failed to take control of the situation with respect to their unit when contacted by building security. As such, a violation letter from management will follow and the matter will be escalated to the legal counsel of the Corporation for further enforcement."

The short-term rental operator will be charged for all damages incurred as a result of their wiley paid guest and management says it is following up with Toronto Police "to ensure that the culprit is charged to the fullest extent of the law."

While representatives for ICE condos have yet to respond to a request for comment regarding the blood splatters or the elevator incident in general, they did post a statement online last week saying that they've recently stepped up security, are proactively enforce masking requirements and are "performing more frequent spot-cleaning in key areas."

Fake news. This is not an accurate reflection of the facts. The board’s response:https://t.co/m0F6V7R71I

The board also said it had cracked down on short-term rentals, claiming that that less than 10 per cent of units are currently registered for that purpose.

"We continue to deter non-compliant short-term rentals with ongoing monitoring, access control, a reward program for people who report illegitimate hosts and mutual cooperation with the City of Toronto," reads the statement.

But the resident who sent us the above photo of the bloody hallway —
and many others online — say the ghost hotel situation remains out of control at ICE, which is located right in the middle of Toronto's tourist-heavy South Core neighbourhood.

"STR (short-term rentals) have been a huge issue for this condominium for years, however the management IS STILL ALLOWING STR," writes the resident. "There have been way too many incidents: shooting bullets flying through the walls and stabbings consistently like every weekend. There's blood in the lobby and outside courtyard."

"They must be getting paid side money by the owners of short-term rentals, I cannot think of any other reason why they let it continue."