A few weeks into the demolition of the easternmost portion of Toronto's Gardiner Expressway, the teardown is ramping up (sorry) while the elevated arterial's ramps come down as a part of the city's Gardiner Expressway & Lake Shore Boulevard East Reconfiguration project.

The last traffic traversed the Gardiner's Logan ramps on Tuesday, August 31 at 9 p.m., the final cars to use the exit since its in 1966 opening. By the following weekend, demolition of the ramps' elevated structures was causing quite the racket in and around the Port Lands area.

Removing the ramps involves a lot of noisy concrete breaking and steel cutting. This heavy-duty demolition has been limited to weekends from 7 a.m. to 11 p.m. in an effort to limit the disruption to local businesses. 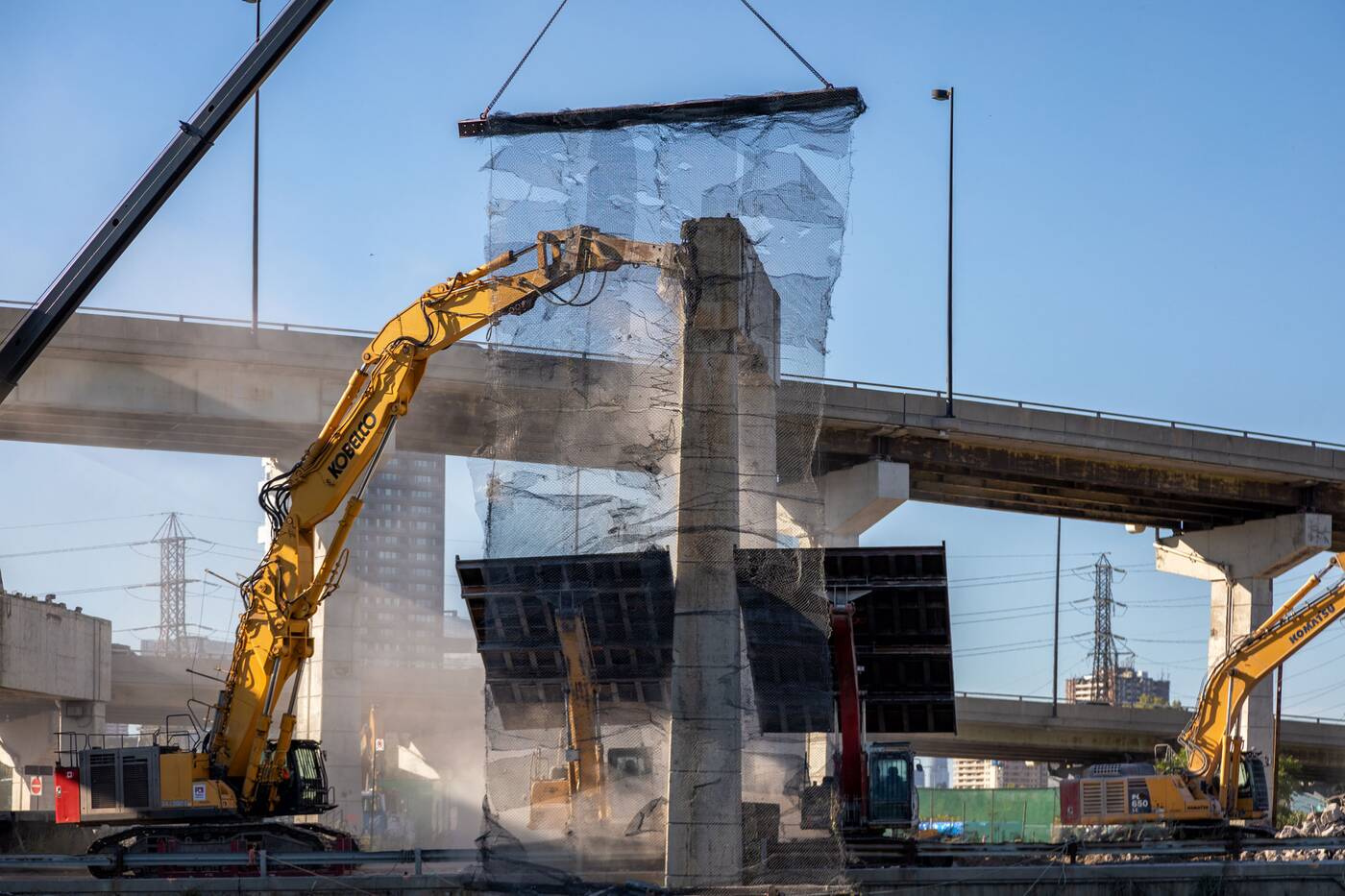 Netting to reduce the spread of debris, and boards to catch falling rubble and concentrate it into piles. Photo by Jack Landau.

Aside from the head-rattling noise, complaints from motorists, pedestrians, and cyclists have been a constant throughout the demolitions.

These complaints revolve around confusing detours through the Port Lands, resulting in long, convoluted routes around road closures to accommodate the teardown, that make documenting this moment in history a bit of a chore.

There are only a few ways to check out the action, the most straightforward starting at the east end of the closures, where the Logan ramp's final approach to Lake Shore Boulevard at Booth Avenue is now just a stub. 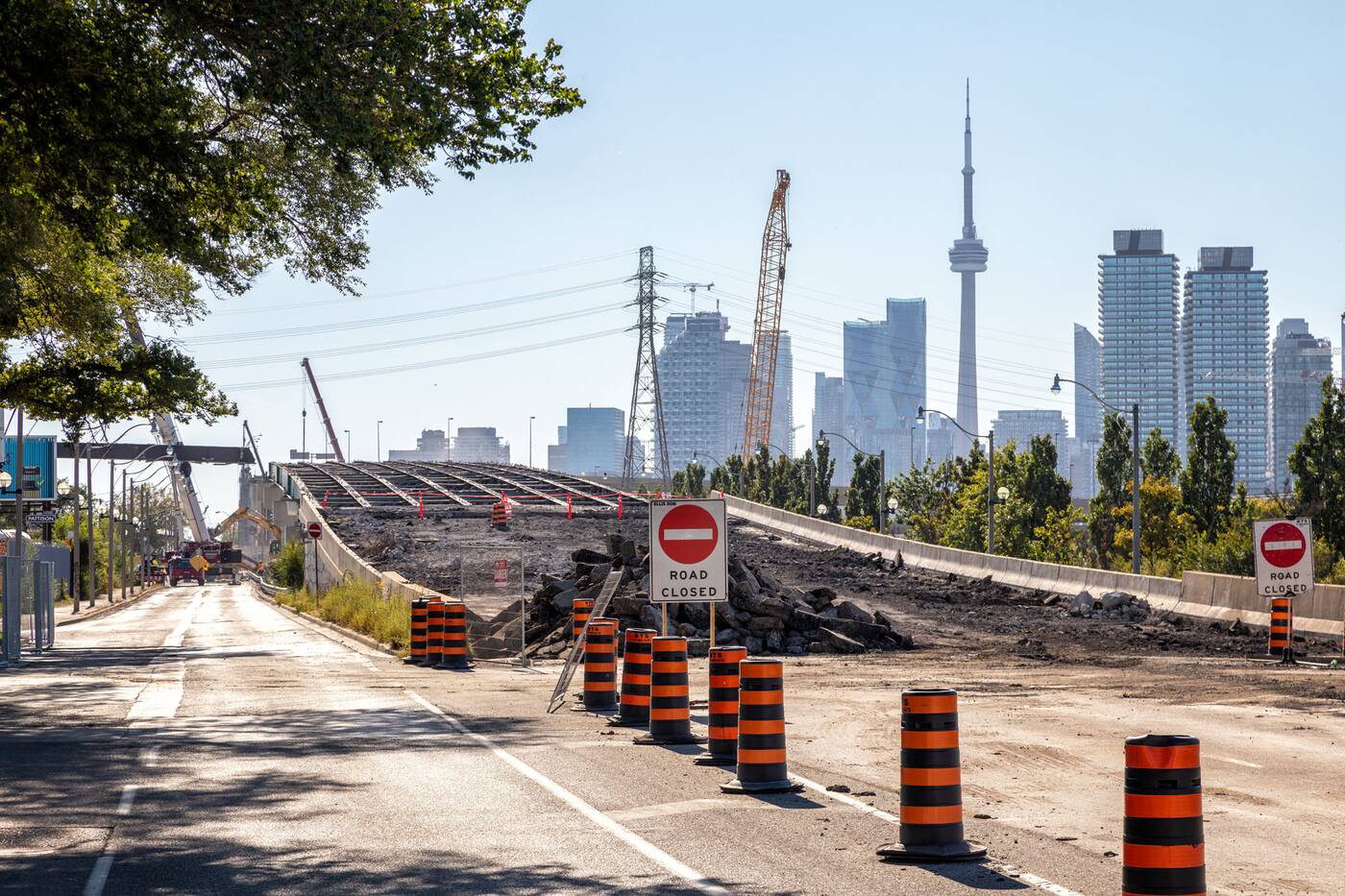 Disconnected from its surroundings and quickly being disassembled beam by beam, the east ramp's remaining road surface has been stripped away, and the underlying steel structure is visible. 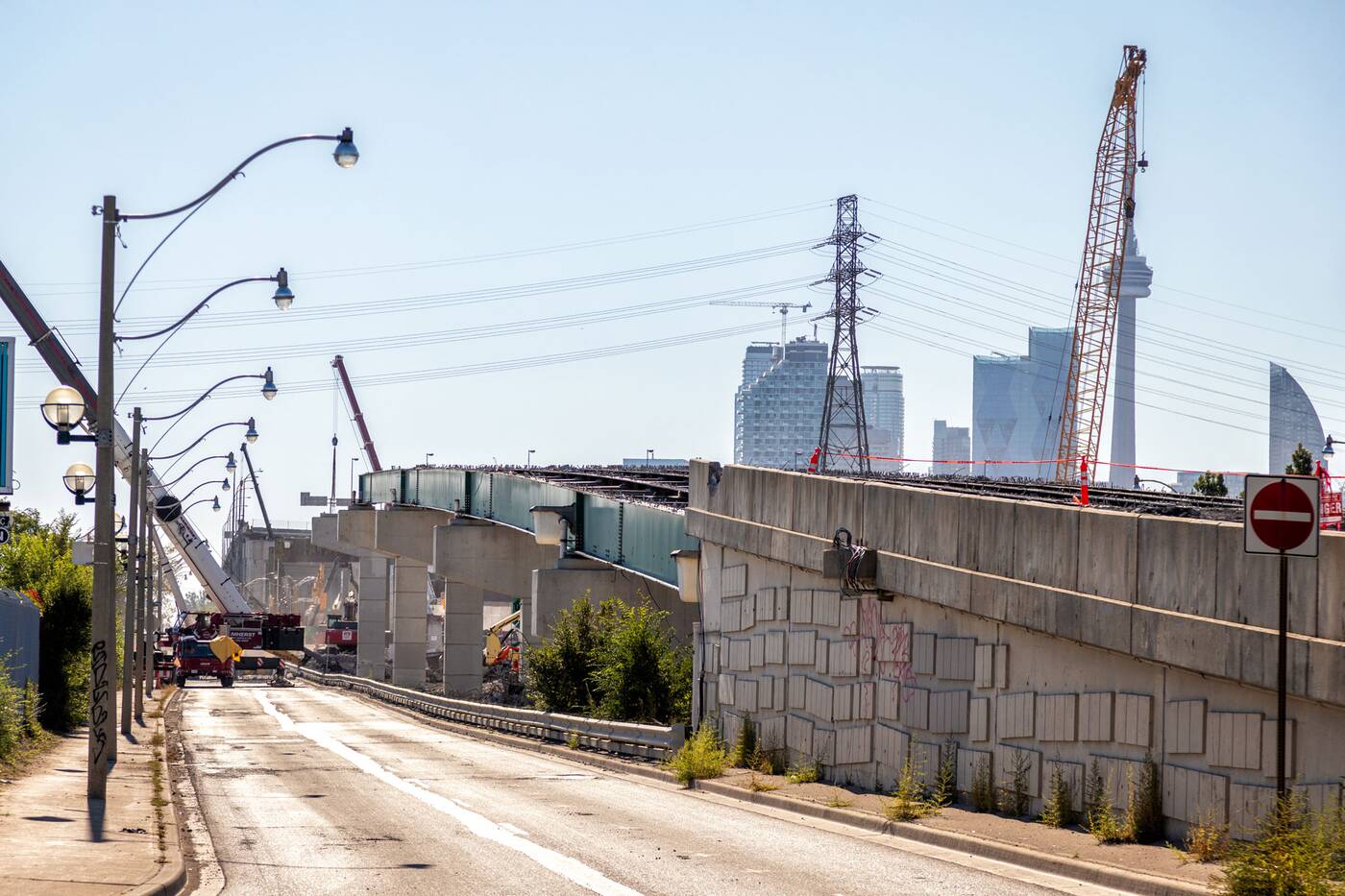 The ramp has now been disconnected to the sections further west. Photo by Jack Landau.

Detouring south and then further west through the Port Lands, most of the demolition work can be spotted from points along Villiers Street. 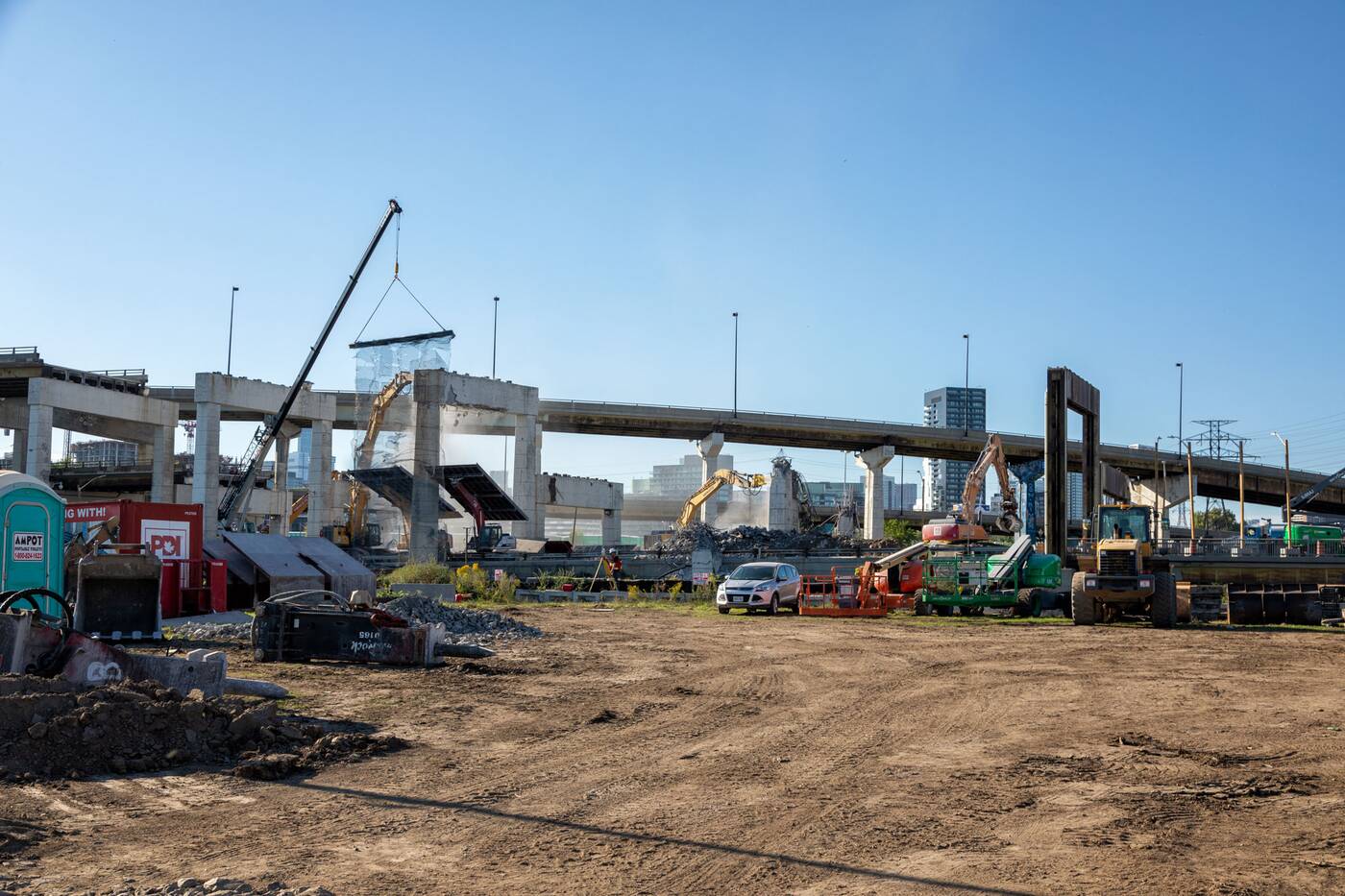 The section of the expressway from Saulter Street to just west of Don Roadway has ceased to exist, all but for a few of the elevated supports, or "bents," that carried traffic just a few weeks earlier. 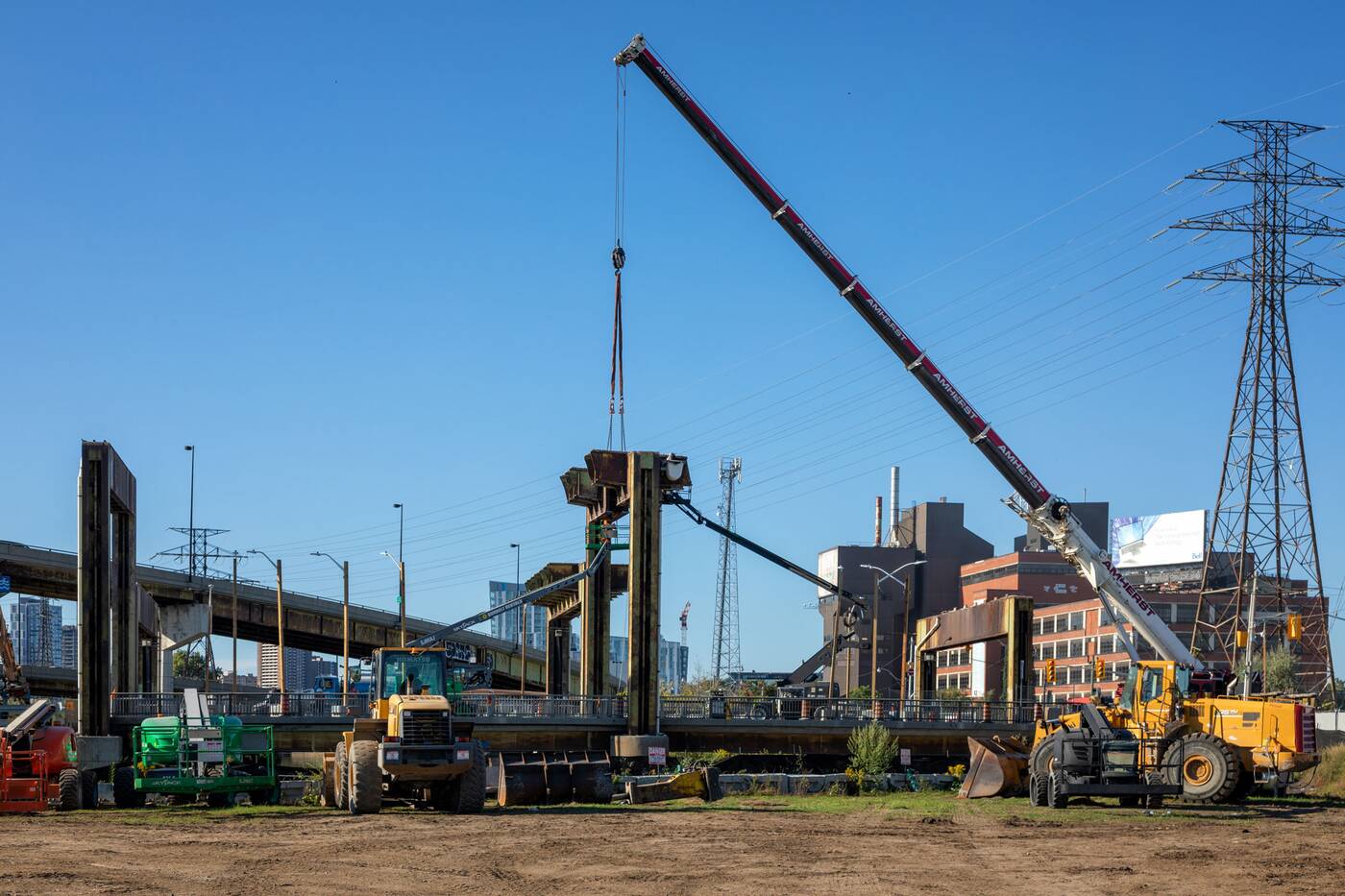 Elevated highway supports have been stripped down to just their steel cores around Don Roadway. Photo by Jack Landau.

Their concrete stripped away, the bents have been reduced to their steel cores, which are being cut apart in sections by crews on cherrypickers, and hauled away with a mobile crane. 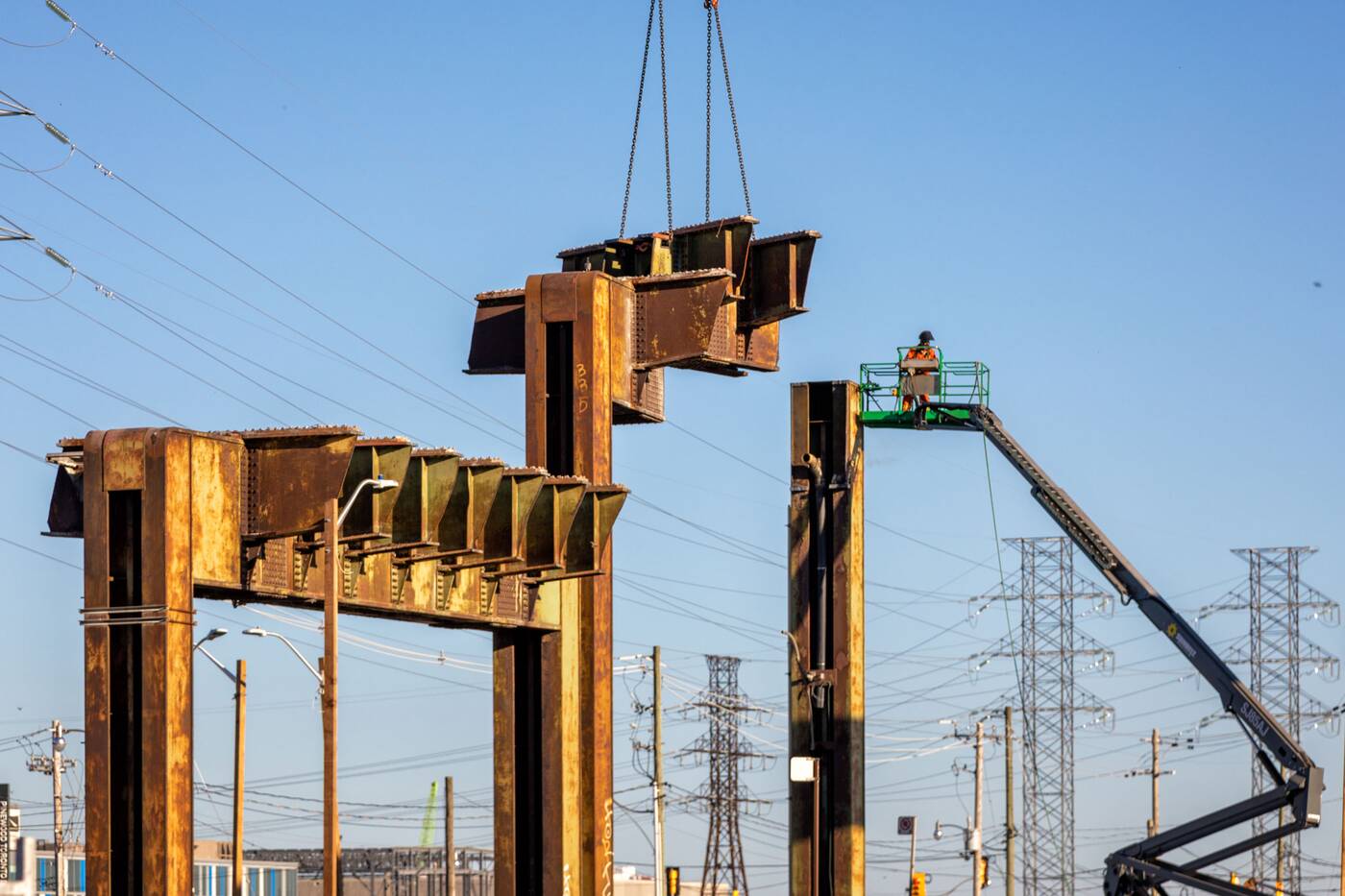 Sections of the steel structures being cut and hoisted away by crane. Photo by Jack Landau.

The concrete and rebar that made up the supports and road deck have been reduced to piles of rubble, being sorted for recycling and eventual removal from the area. 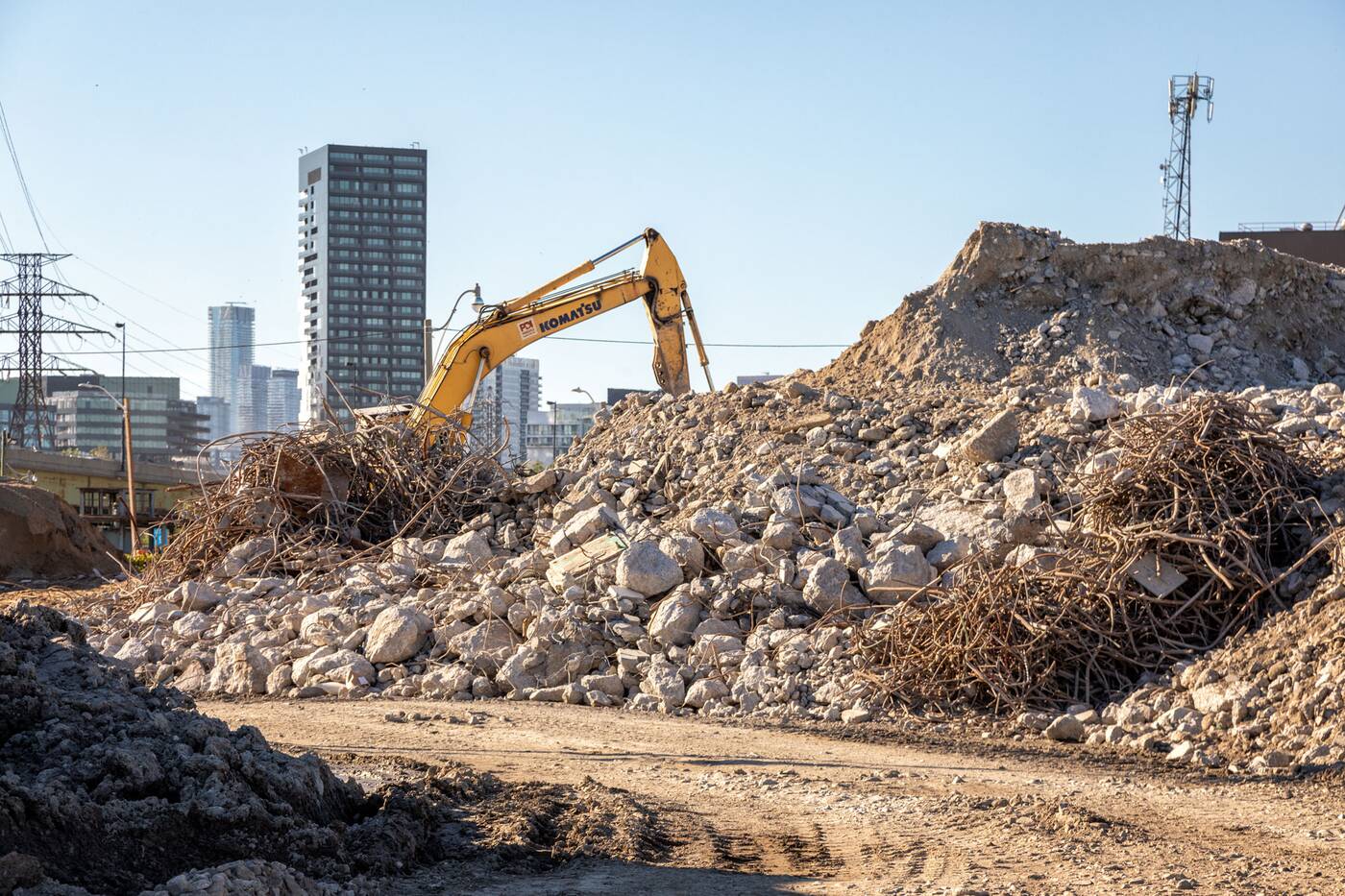 Piles of rubble and steel being sorted for recycling. Photo by Jack Landau.

Structural demolition is now progressing for the elevated stretch running just north of the Keating Channel. 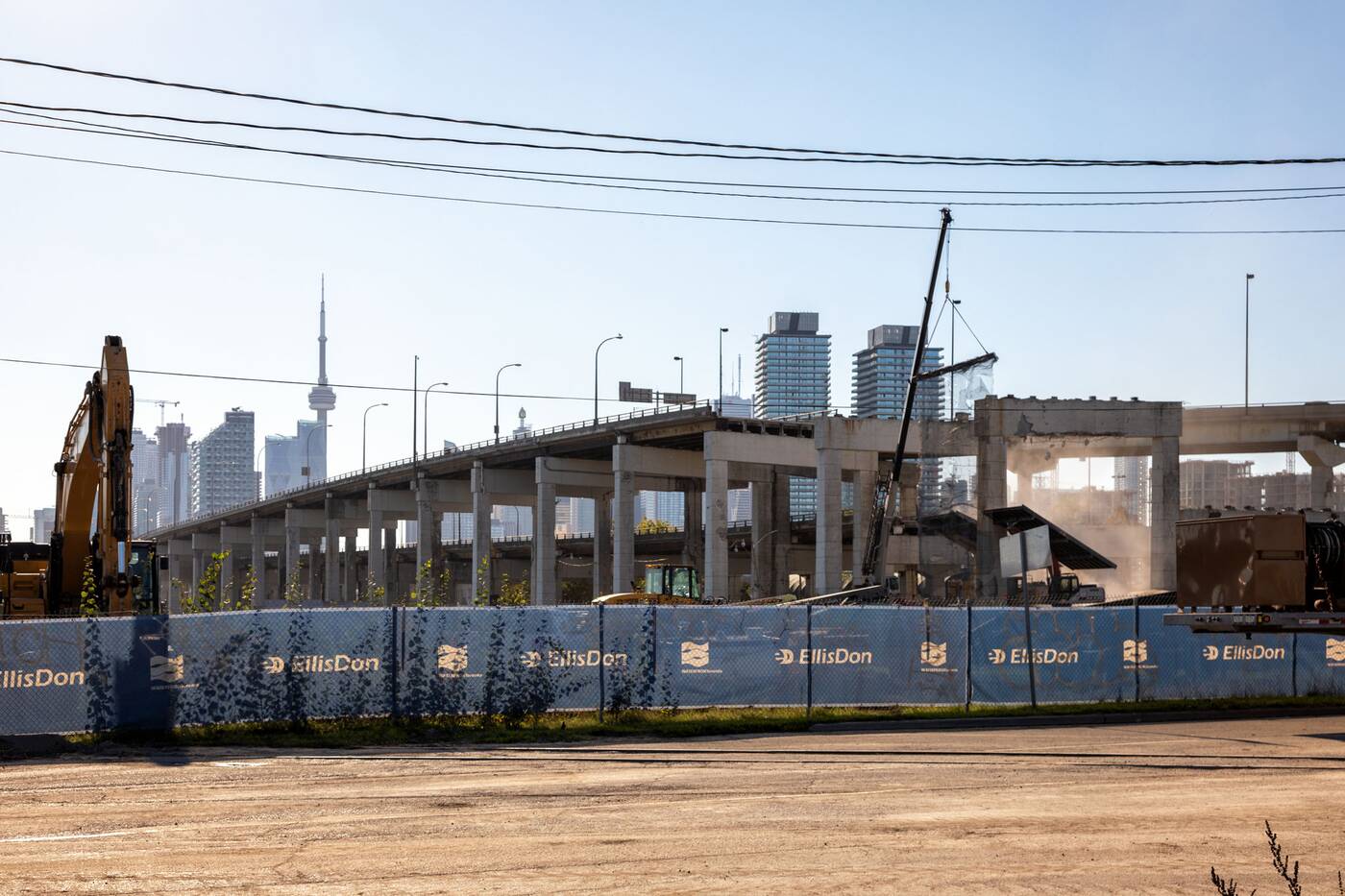 Looking northwest from Don Roadway and Villiers Street towards the remaining section of Gardiner along the Keating Channel. Photo by Jack Landau.

This weekend, trucks were on hand, blasting streams of water at excavators tearing concrete to help combat the spread of dust from the breaking activity. 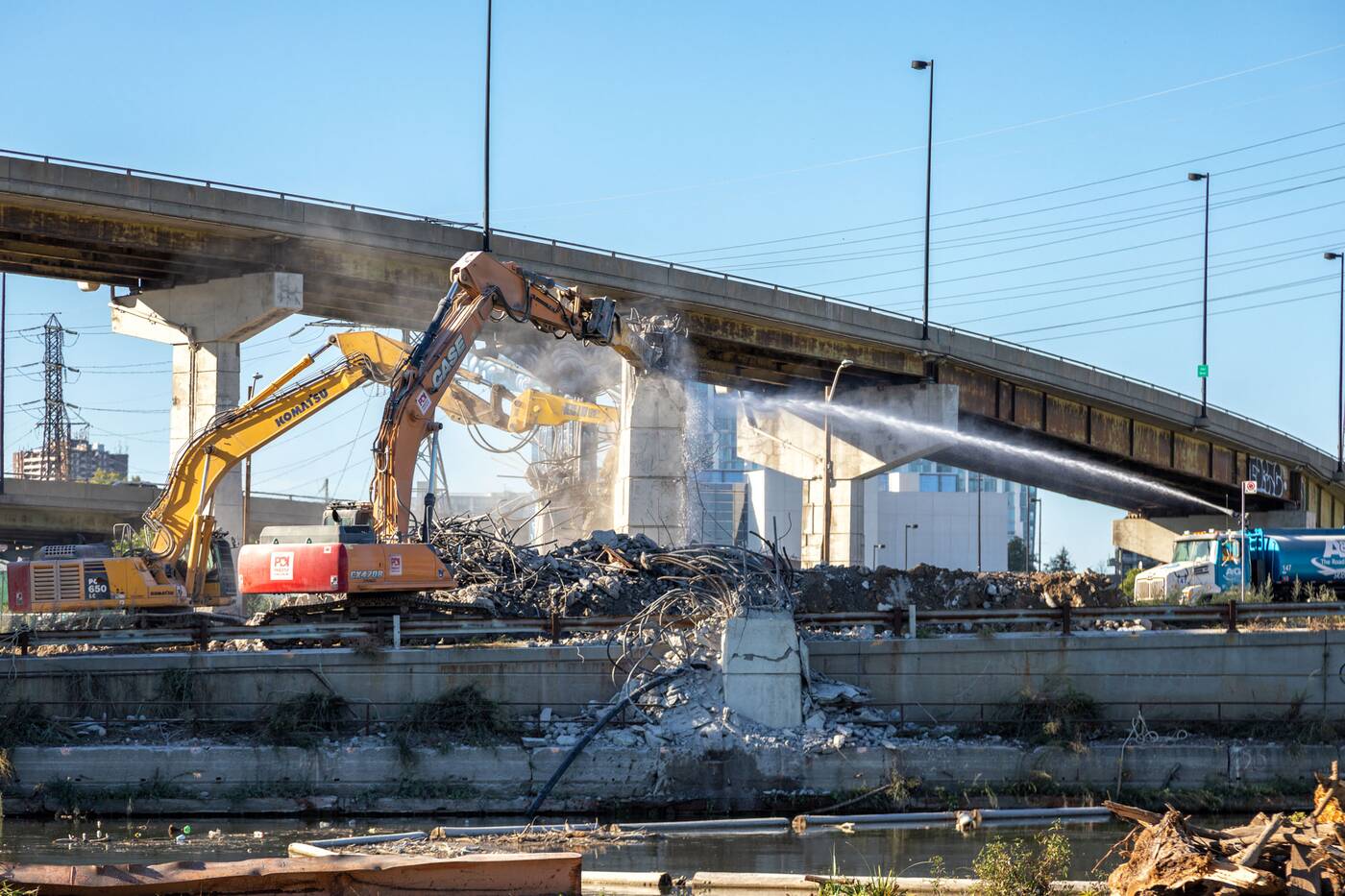 Looking north from Villiers Street across the Keating Channel to a water truck hosing down demolition to reduce dust and debris. Photo by Jack Landau.

The demolition work is already altering the feel of the Keating Channel, and it's becoming more apparent how the removal of this stretch will open up the area to foot and cycling traffic. 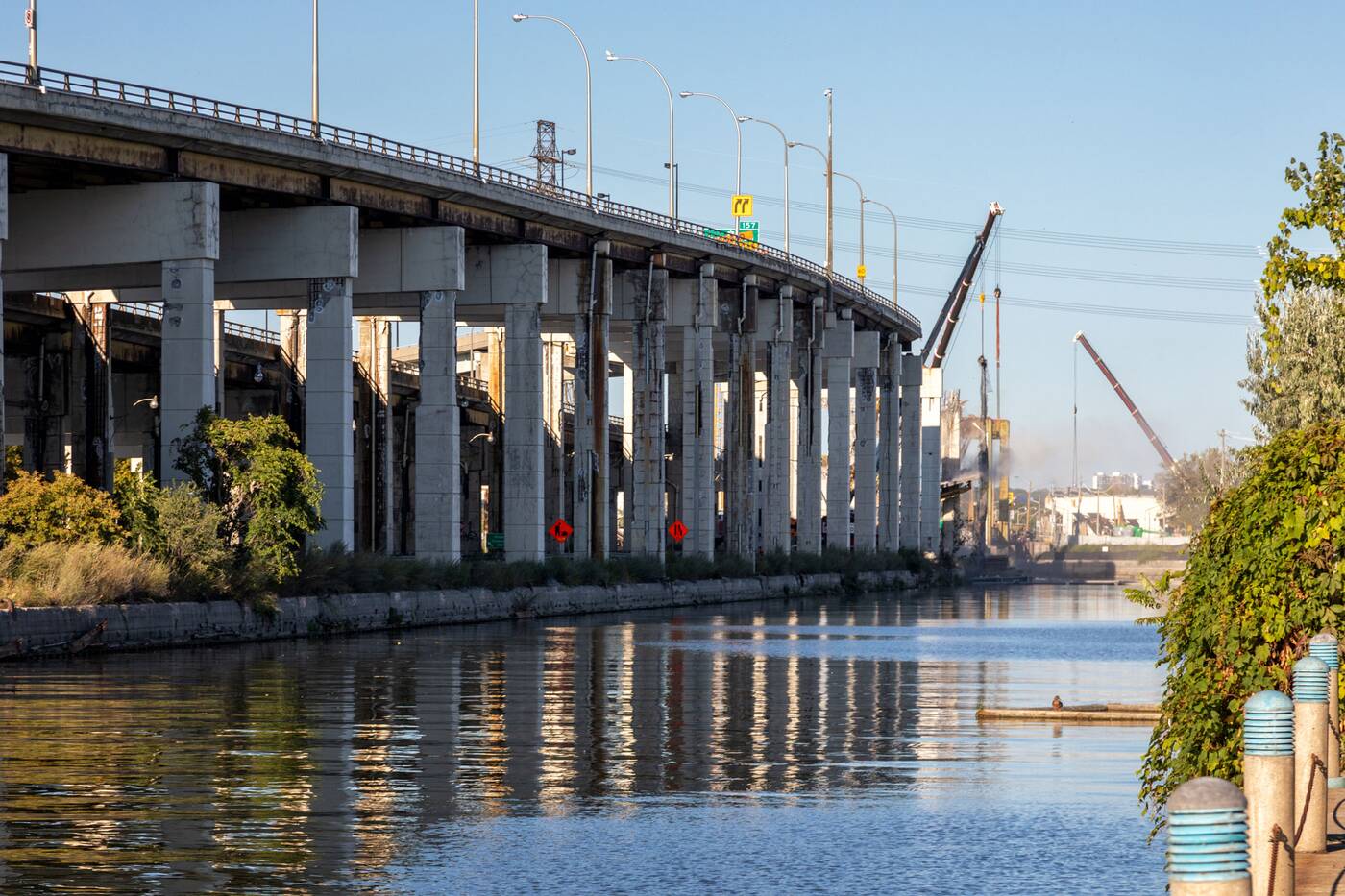 View of the Gardiner Expressway demolition facing east from the south side of the Keating Channel. Photo by Jack Landau.

You can get up-close and personal with the demolition by taking a quick jog along the Lower Don River Trail, arriving at the temporarily closed pedestrian bridge spanning the Don River. 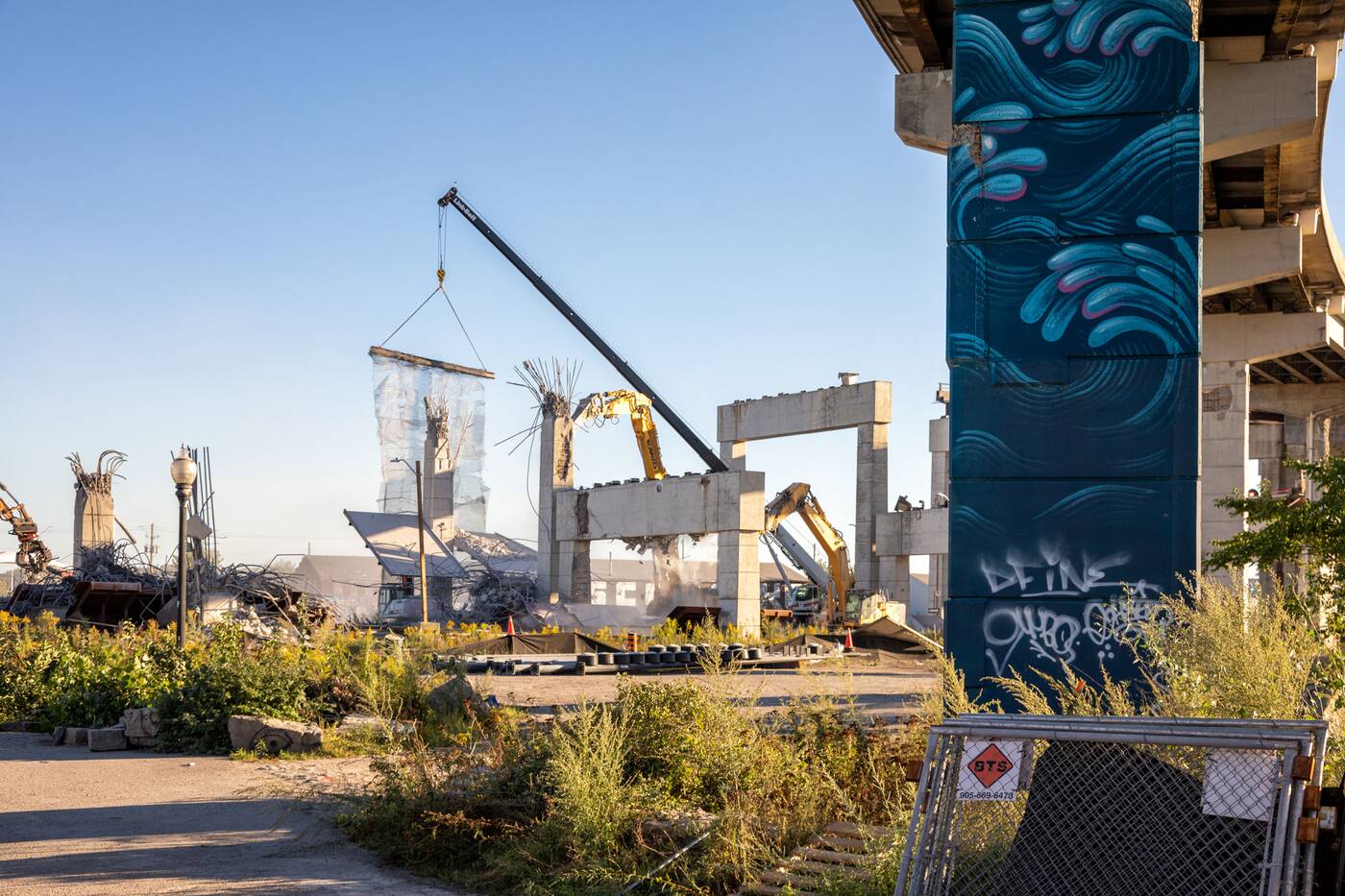 View of the Gardiner Expressway demolition from the Lower Don River Trail. Photo by Jack Landau.

Cyclists and joggers were stopping dead in their tracks this weekend after rounding the bend where the trail meets the Don River, surprised by a close-up view of the teardown in action. 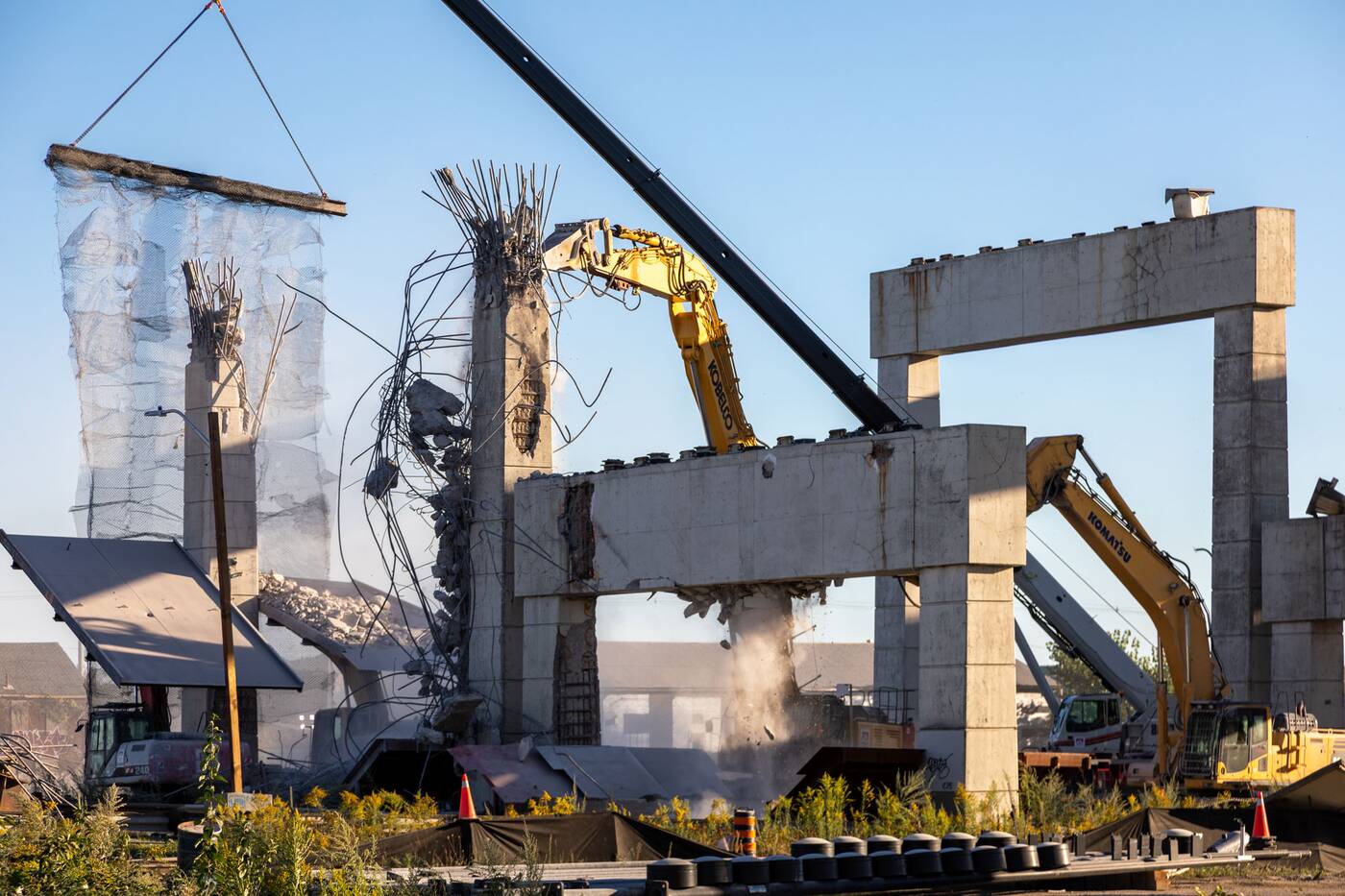 Supports being torn down, viewed from the Lower Don River Trail. Photo by Jack Landau.

Still, many aren't impressed with the spectacle. Reports of ridiculous traffic in the area continue weeks into the project, hitting motorists in the east end particularly hard. 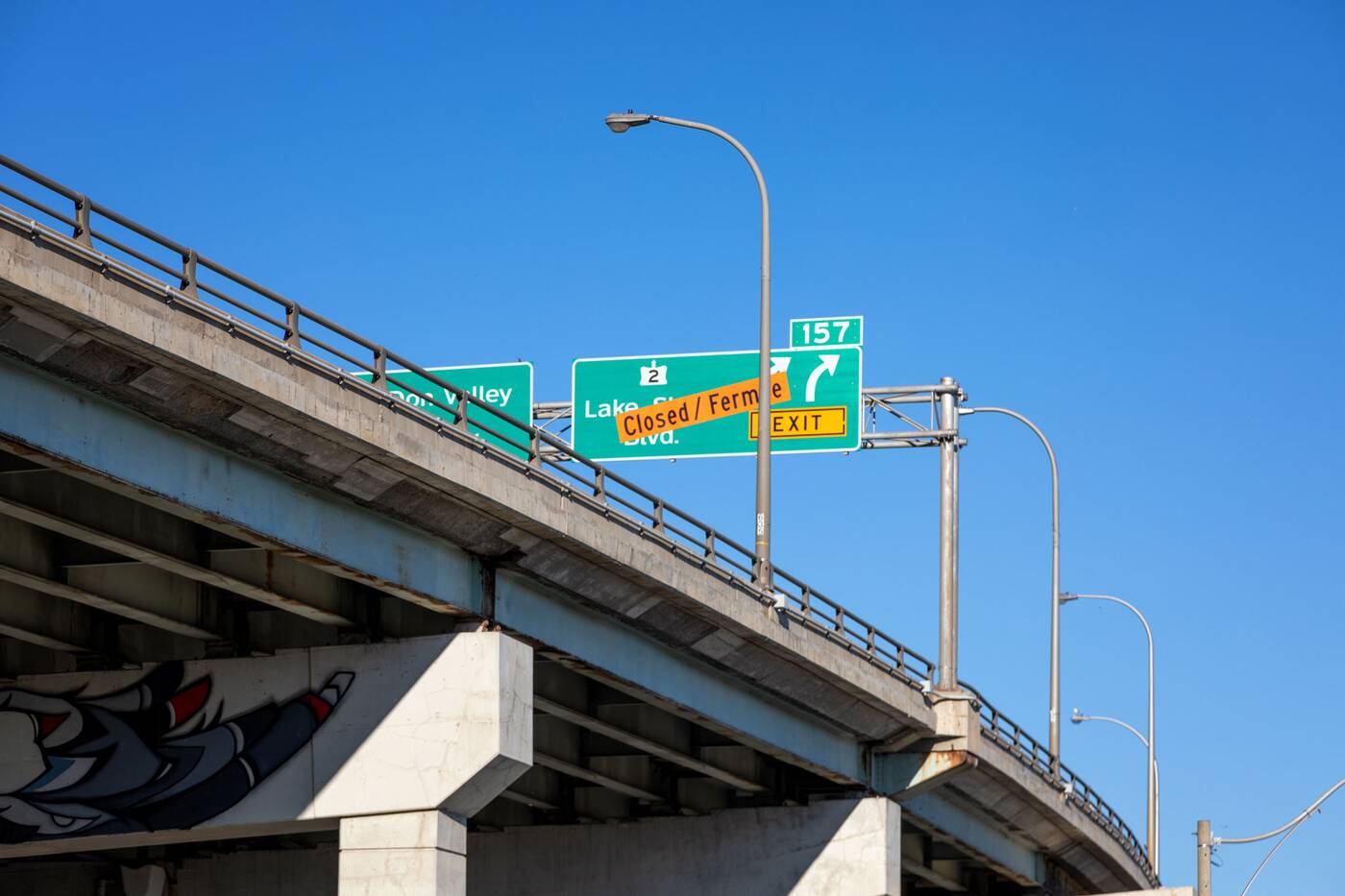 Closure sign on the Gardiner Expressway, just west of the demolition activity. Photo by Jack Landau.

Traffic snaked up as far as the Don Mills south ramp from the Don Valley Parkway this weekend, conditions many residents of neighbourhoods east of the Don are dreading will remain a problem until the project's 2024 completion date.