Toronto has waited a long time for its next significant transit expansion. A really long time. After a series of delays and setbacks, the TTC and Metrolinx's Eglinton Crosstown LRT project is now seeing the light at the end of the tunnel.

Metrolinx revealed yesterday that the next phase of vehicle testing has started for what will become the TTC's Line 5 upon opening to passengers next year.

Eglinton Crosstown light rail vehicles, or LRVs — a middle ground between subway and streetcar — have been plying sections of the route since 2019. The first of 76 Bombardier Flexity Freedom LRVs was spotted being tested on an elevated guideway outside the Eglinton maintenance and storage facility (EMSF) almost two years ago.

Next, the street-level stretch of track between Laird and Kennedy was powered on back in May to begin testing and commissioning of vehicles.

Six LRVs were moved via truck from the EMSF to Rosemount Drive, just west of the line's eastern terminal station and Line 2 subway connection at Kennedy.

Once unloaded, the LRVs were connected to the line's catenary system, overhead wires supplying power, and driven west to an underground storage area built to accommodate the terminal station.

Metrolinx has now moved LRV testing to the next stage. Six LRVs are now running the route under the same conditions they will experience when service begins on the line next year.

The testing plan includes LRV cars coupled together along with testing of increased speeds and braking abilities. 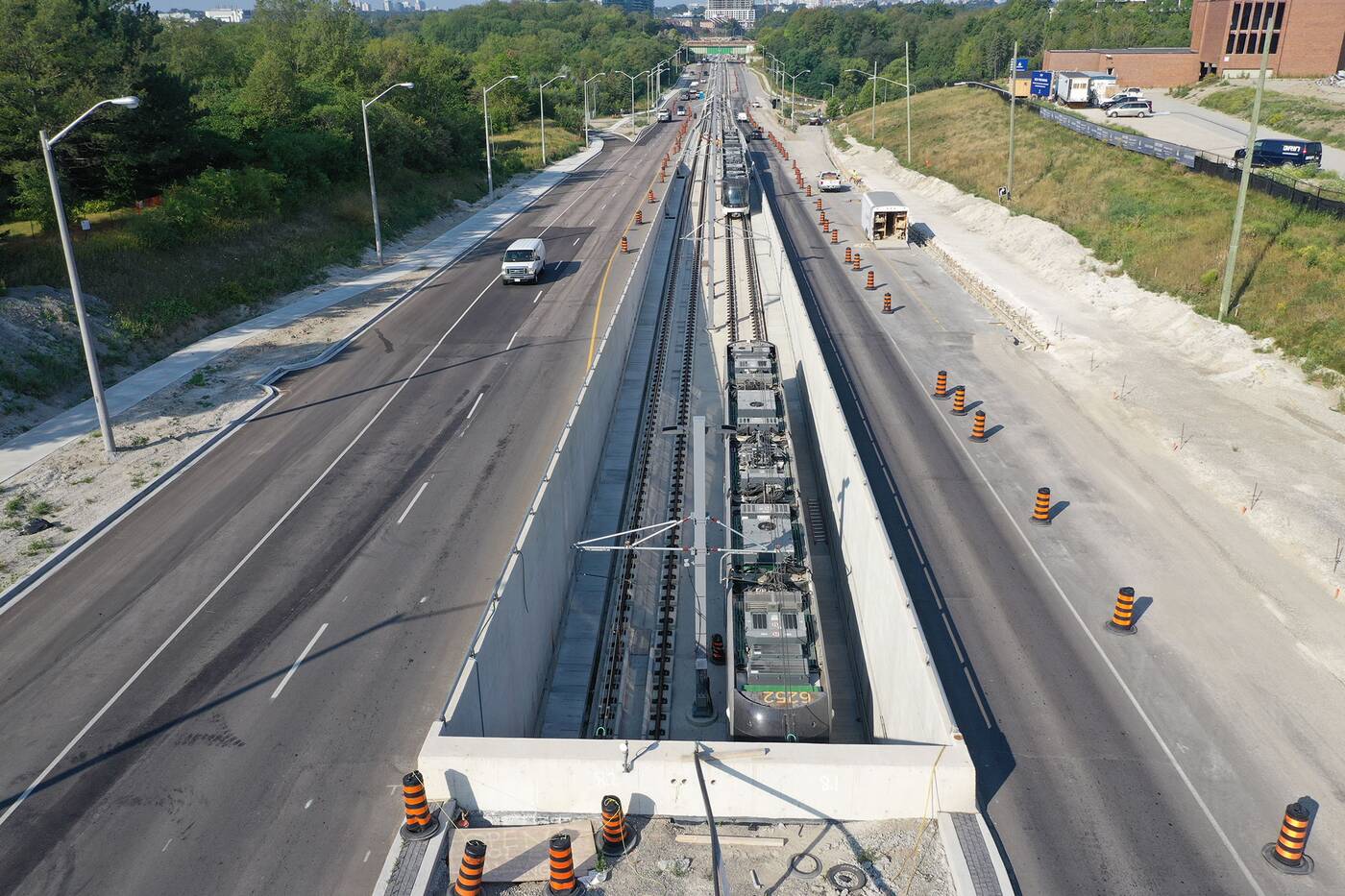 Metrolinx expects testing for the vehicles will continue for the next few weeks, set to conclude this fall. Once the testing wraps up, the six LRVs will make the return trip to the Mount Dennis maintenance and storage facility.

This will also be a test for Toronto pedestrians and motorists interacting with the LRVs on Eglinton for the first time. In an area of the city where the car is still king and a few kilometres from the closest streetcar route, this could very well be some area residents' first interaction with urban surface rail transit.

Metrolinx is taking care to caution pedestrians, motorists, and cyclists in the area that "these are still active construction sites and to continue to exercise caution around these areas."

Phil Rodriques, Metrolinx's Senior Manager of Community Engagement at Rapid Transit – 416 tells blogTO: "When the Eglinton Crosstown goes into service, the city will have a much-needed new line that will create connections in areas with a huge demand for transit."

"Coupled with the Ontario Line, the Crosstown LRT will be a part of a network with existing and future transit lines, reaching more neighbourhoods, with seamless connections, more frequent service and reduced crowding."

The Crosstown was initially intended to open in 2020 before the timeline was bumped back. It was subsequently revealed that the project would not meet its contractually obligated completion date of September 2021.

The line is now anticipated to enter service next year, 11 years after construction first began and two years after the initial expectation.