When I was a boy in the 1940s, my friends and I enjoyed roller skating on the sidewalks in our neighbourhood. We purchased our skates from a hardware store that also sold sports equipment such as toboggans and sleds.

The roller skates clamped on to our shoes, a key employed to open and close the clamps to fit the size of our shoes. When we became teenagers, we considered ourselves quite grown up when our parents allowed us to journey on the streetcar to downtown Toronto to skate at the Mutual Street Arena.

It was located at 78 Mutual Street, on the east side of the street, between Dundas Street East and Shuter Street. Compared to our neighbourhood sidewalks, the smooth floor of the arena was "roller-skating heaven."

We skated to music around the enormous rink-size floor, which contained ice during the hockey season. I remember that the arena was an impressive structure, although when I visited it in the 1950s, it was no longer in its prime.

In the 1880s, there was an outdoor a rink on the four-acres site on the west side of Mutual Street. In summer, the open space was a children's playground, with an ornamental fountain. In the 1890s, the Toronto Directories reveal that it contained the Canadian Curling Rink.

The Goad's Atlas does not depict any building on the location, so it is assumed that it was an outdoor rink. In 1902, the Caledonian Skating Rink occupied the space, and Mr. J. Moore was the caretaker.

One source states that this rink was housed in a large building, but the maps do not depict any structure. I was unable to resolve this discrepancy. The 1910 Goad's map of the area simply shows the site as containing a "skating rink," and again, no building is depicted.

In the early decades of the 20th century, the population of the city continued to expand. A larger auditorium was needed for special events and concerts, as Massey Hall was no longer of sufficient size.

As a result, a group of investors, headed by Sir. Henry Pellatt of Casa Loma fame, formed the Toronto Arena Company. They purchased the site on Mutual Street, where the Caledonian Rink was located, and raised the funds to finance a building.

To design the structure, the architect F. H. Herbert, from the firm of Ross and McFarland was hired. Herbert created a plain rectangular building with a symmetrical east facade with limited ornamentation.

It was originally to be primarily an opera venue and special events space, but the plans were changed as the investors believed that it would be more profitable if it were combined with a hockey arena.

The total cost of the building was $500,000, and when it was completed, it was the largest auditorium in Canada. The ice rink was 230’ by 95’, surrounded by seats that accommodated almost 8000 persons. Its name was to be the Arena Gardens of Toronto.

It opened on October 7, 1912, but the equipment to produce ice for the rinks had not yet been installed. However, but this did not detract from the excitement of its inauguration.

Opera and comedy were the themes on opening night. Centre stage was taken my Marie Dressler, Arturo Tibaldi, and Albert Spalding. Also present was a star of New York’s Metropolitan Opera—Alice Neilson, supported by a 62-man orchestra. 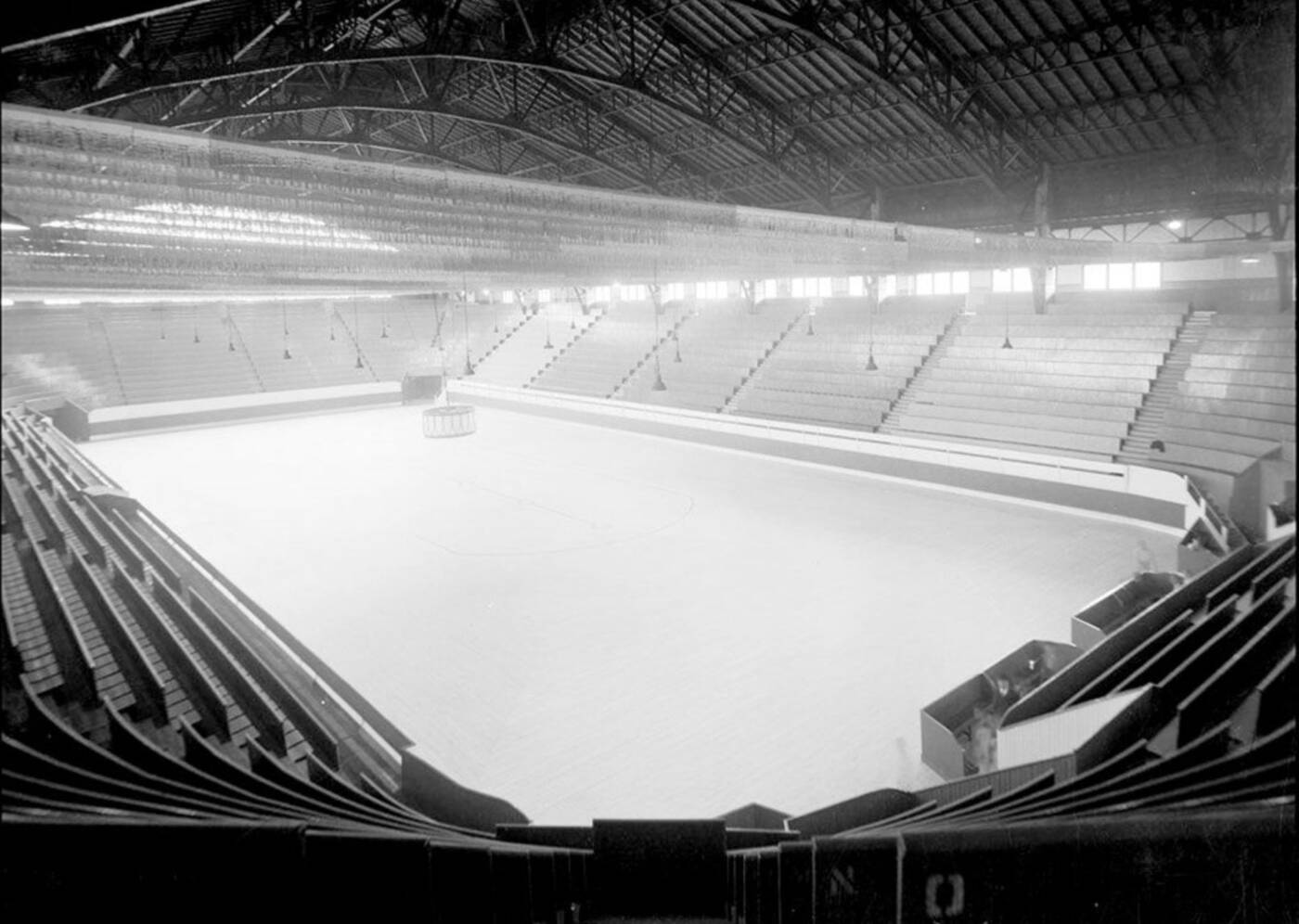 In late November of the same year, the ice plant commenced operating, one of the first in Canada to manufacture ice artificially. It was able of producing 60 tons of ice every 24 hours, resulting in the extra ice being sold for kitchen ice-boxes across the city.

The first hockey game in the arena was held in November of 1912, and the Toronto Arena Hockey Club was born. The team's name was the Toronto Blue Shirts in 1912, its colours being blue and white.

Many simply referred to it as the Toronto Team. In 1913, a huge rally was held in the arena for Sir Wilfrid Laurier, even though he had been defeated in the 1911 election.

In May of 1914, the RMS Empress of Ireland sank in the icy waters of the St. Lawrence River. More passengers lost their lives in this tragedy than on the Titanic. It was Canada's greatest maritime disaster.

The funeral service for the victims that were members of The Salvation Army was held in the Arena Gardens, as it was the only building in the city able to accommodate the crowd of mourners.

The funeral procession departed from the arena and proceeded north on Yonge Street to Mt. Pleasant Cemetery, north of St. Clair Avenue.

In 1919, the name of the hockey team playing in the arena was changed to the St. Patricks (St. Pats). On February 4, 1923, Norman Albert narrated the first radio broadcast of a game.

In 1921, a prohibition rally of 12,000 was accommodated in the Garden Arena. In 1925, the inaugural service of the newly formed United Church of Canada was held within it.

For the 1926-1927 season, the St. Patricks name was changed to the Toronto Maple Leafs. In 1931, the Leaf franchise relocated to Maple Leaf Gardens at Carlton and Church Streets.

The Arena Gardens was renamed Mutual Street Arena, and the building at Carlton and Church became known simply as, "The Gardens."

After the Leafs departed, the arena on Mutual Street was used for boxing matches, boat shows, home shows, wrestling, and tennis.

In 1942, Glenn Miller's Band performed in the arena, and in 1949, Frank Sinatra crooned to enthralled crowds. In 1962, it was closed for a massive $3 million renovation.

At this time, a restaurant and curling rink were added. When it reopened, it was renamed The Terrace, its main use now roller and ice skating.

In 1989, as property values increased in the core of the city, the owners of the arena sold the building and it was demolished.

Doug Taylor was a teacher, historian, author and artist who wrote extensively about Toronto history on tayloronhistory.com. This article first appeared on his site on April 27, 2016 and has been republished here with the permission of his estate. The article has been modified slightly.