Mount Pleasant Cemetery is a journey through Toronto's history

The Mount Pleasant Cemetery is more than just a series of idyllic foot paths winding through a sea of tombstones—it's a journey through Toronto's past, stretching 205 acres in the heart of the city.

A designated National Historic Site of Canada, this old burial ground is all at once a paradise of historic architecture, a foragers fantasy, an ideal trail for runners and cyclists, and the resting place for a majority of the country's most notable figures. 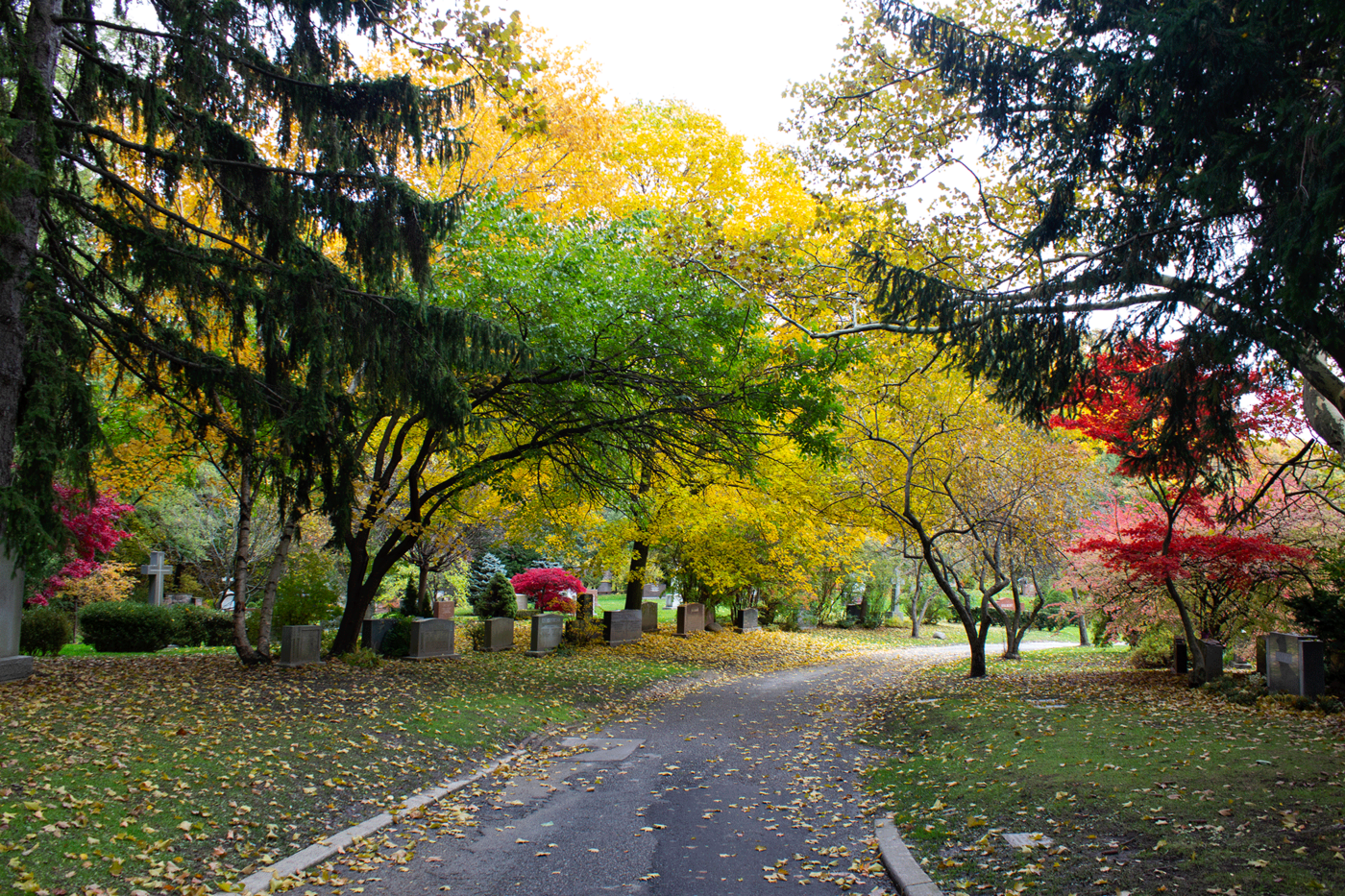 Mount Pleasant Cemetery is a 202-acre graveyard opened in 1876.

Anyone who has passed through Davisville Station on the TTC's Yonge line has likely noticed the sprawling lands of this early 19th century cemetery whizzing by. 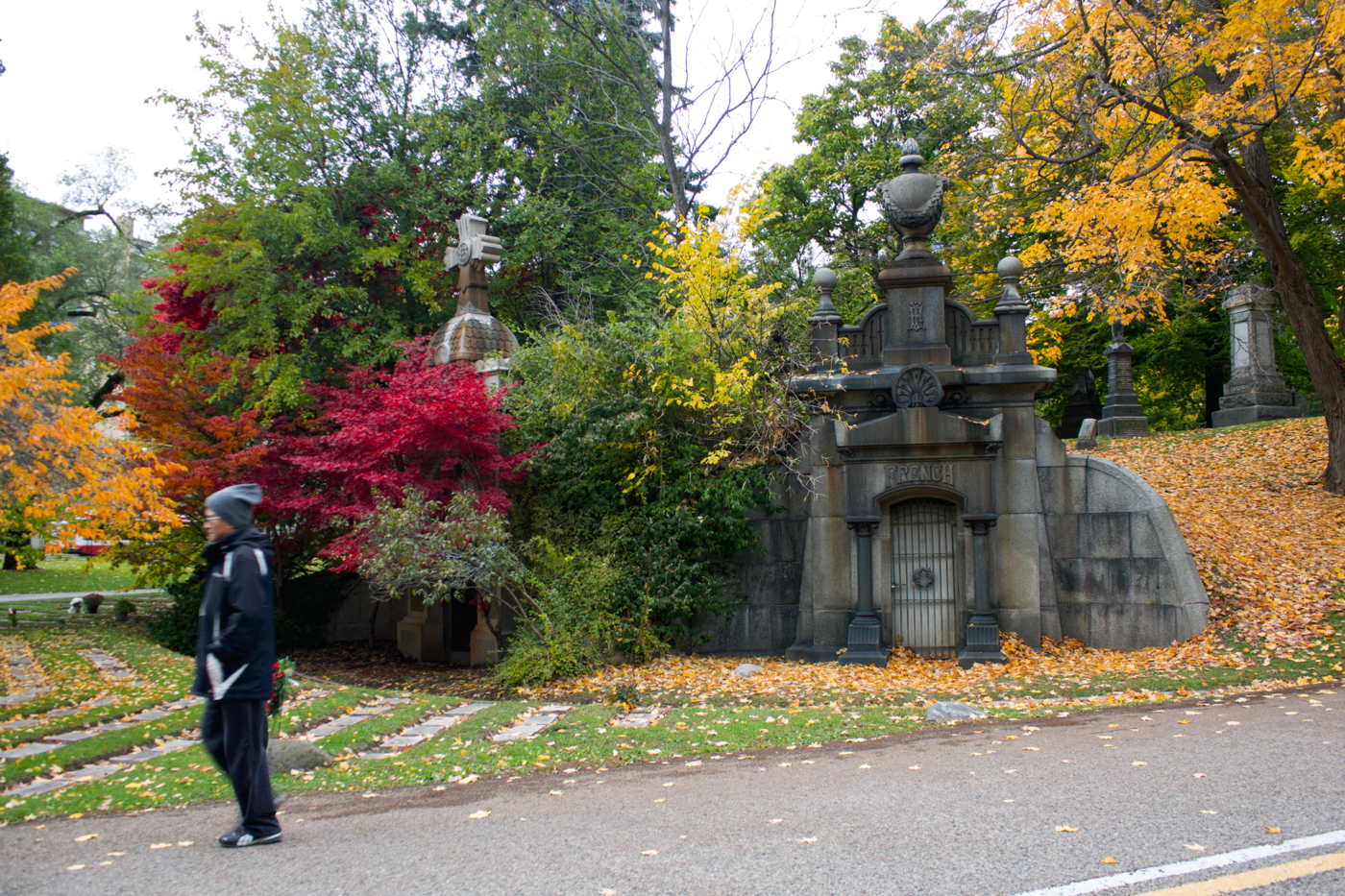 The cemetery was designated a National Historic Site of Canada in 2000.

But the brief view seen from a train window is only a tiny portion of this massive cemetery, which runs from Yonge to Bayview Ave. between Davisville to just north of St. Clair.

Mount Pleasant Rd.—which was built and named after the cemetery, not the other way around—runs through the middle of the graveyard, splitting it in half. 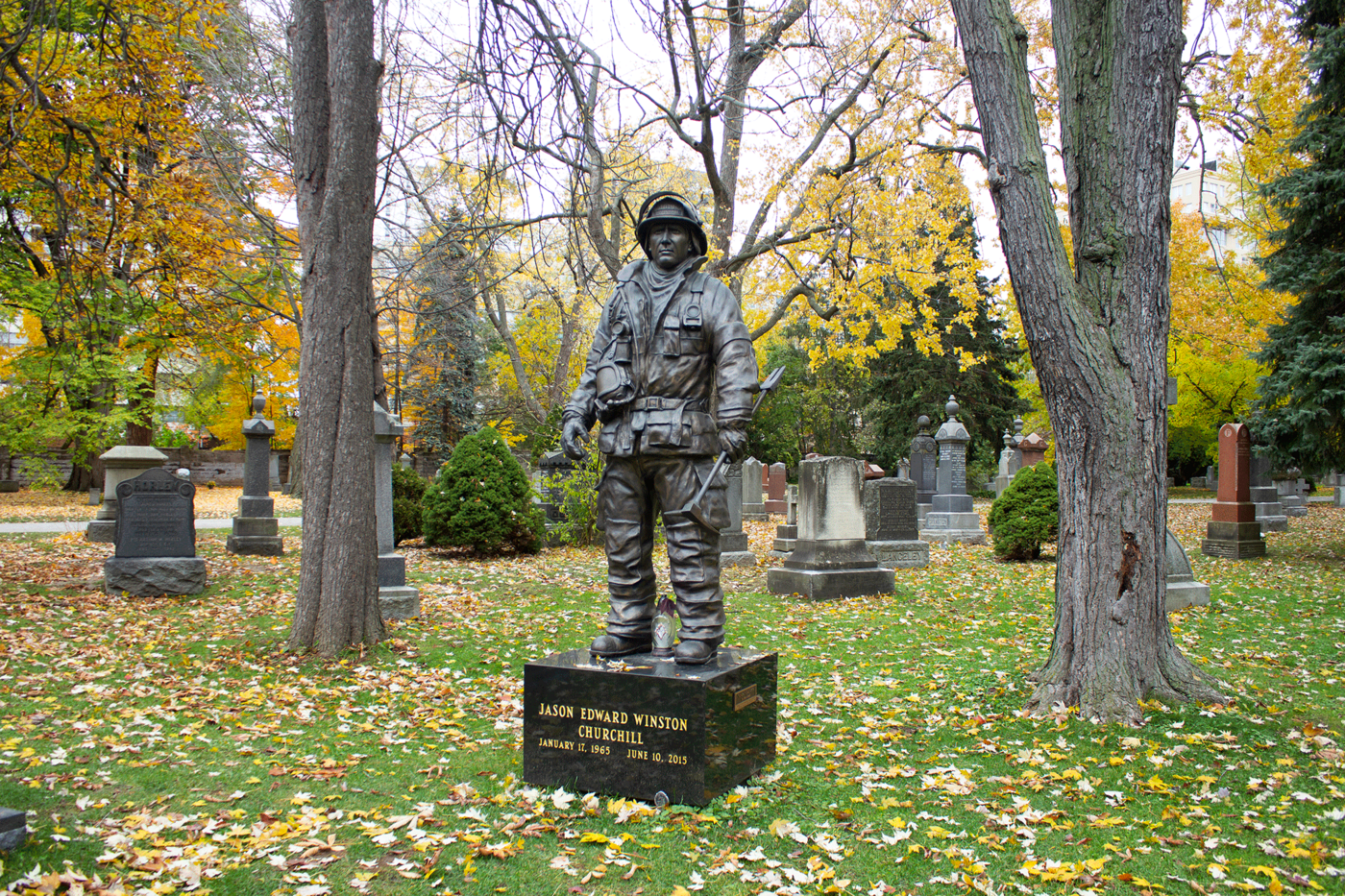 The cemetery is the burial ground for countless war veterans, politicans, and significant figures in Toronto's history.

It's easy to access Mount Pleasant Cemetery: just find the entrance along Yonge or make it a pit stop visit on your hike through the city's central 9-kilometre Beltline trail.

Opened in 1876 on former farm land at a time when vacancies at the Necropolis were quickly diminishing, the Mount Pleasant Cemetery became the first burial ground for the everyday citizenry of Toronto, back when it was "Muddy York". 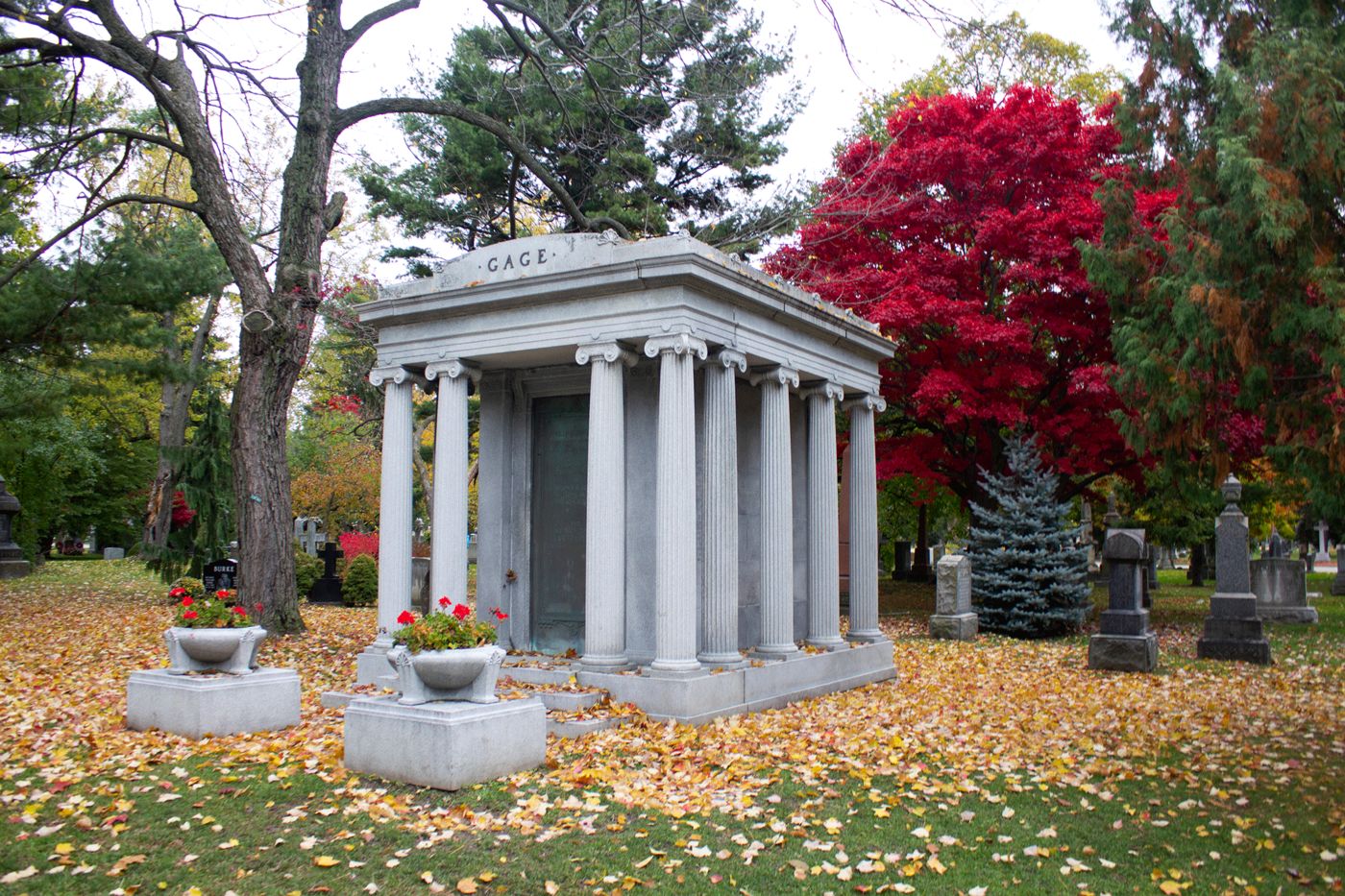 Mausoleum styles are more traditional on the western side of the cemetery near Yonge Street.

Today, a journey from the cemetery's oldest sections near Yonge Street heading east is a walk through Toronto's predominantly Anglo-Saxon colonial past into the multicultural society of more recent years.

The earliest of all 180,000 graves here are located on the western portion of the cemetery, which is divided in to plots (though none are older than the remains of Potter's Fields, the first non-denominational graveyard in the city). 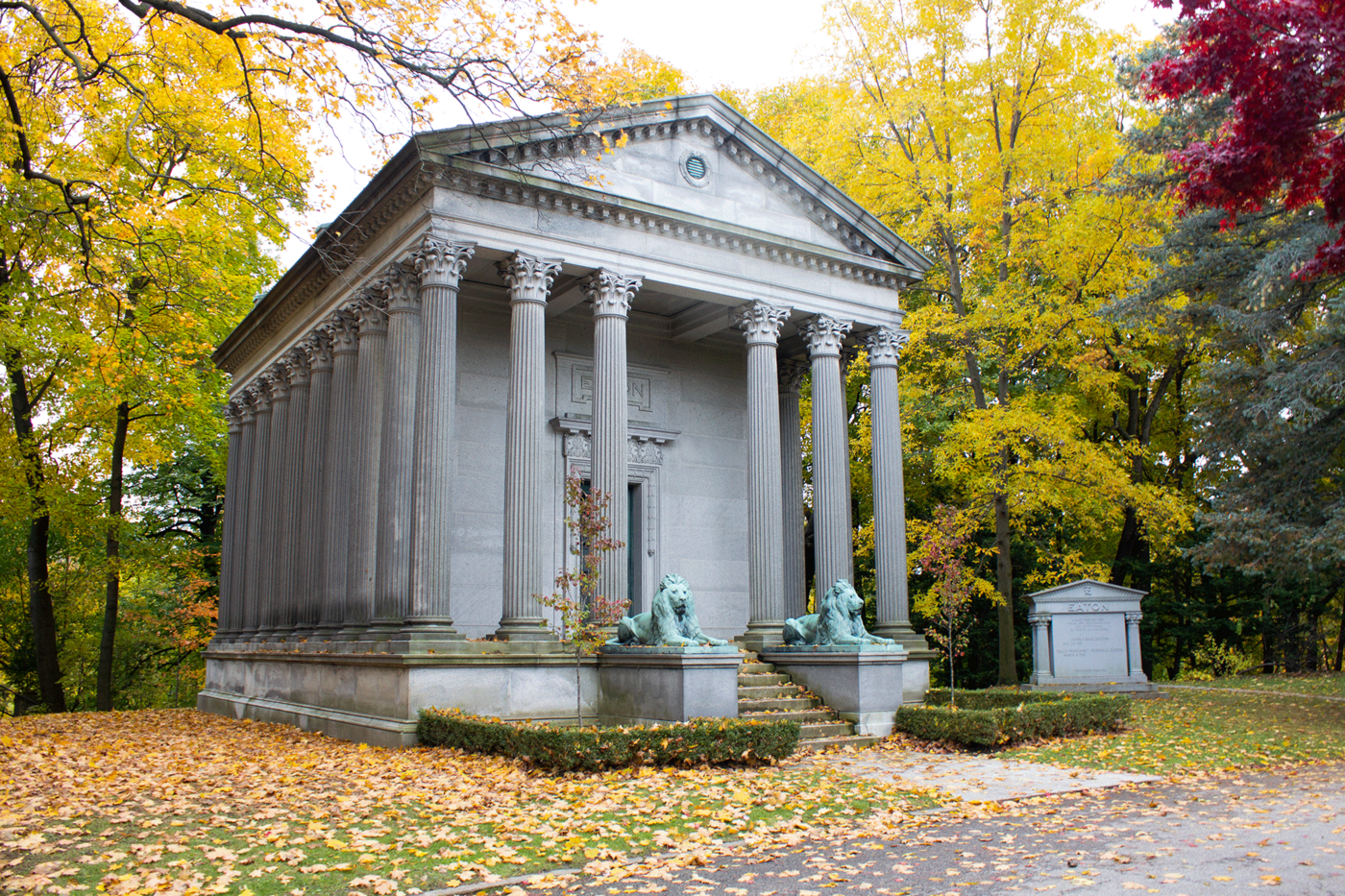 One of the most well-known sites is the Eaton family mausoleum.

The most popular memorials are those whose names Torontonians will easily recognize: the Eaton family mausoleum on Plot 2 is the majestic, columned stone structure of  Timothy Eaton, who died of pneumonia in 1907. 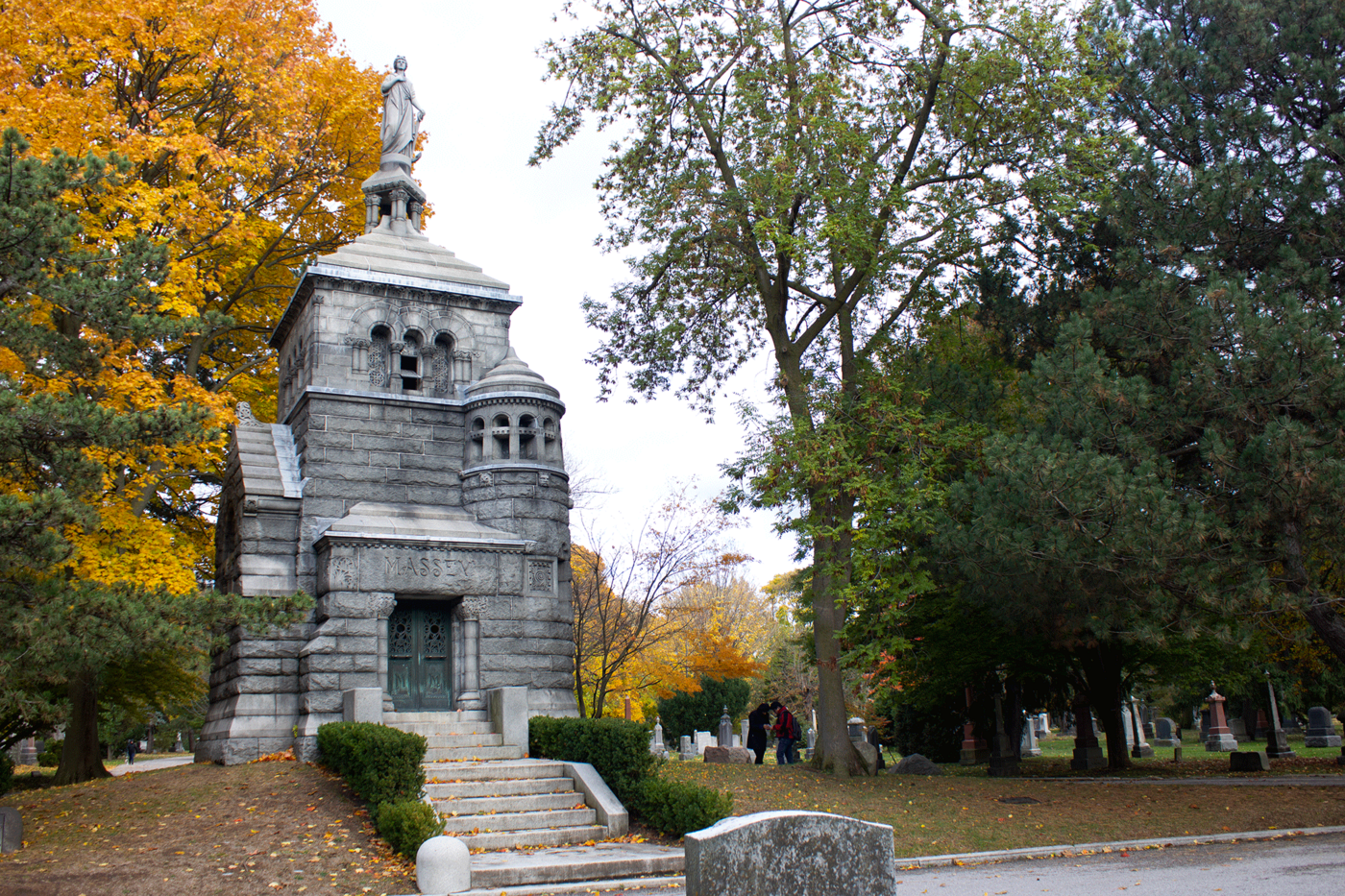 The Massey mausoleum was also designated an heritage site in 2000.

Another is the Massey mausoleum, a beautiful Romanesque building with a below-grade crypt which was also designated a historic building in 2000. Today Hart Massey's name lives on through a number of Toronto institutions, most notably Massey Hall. 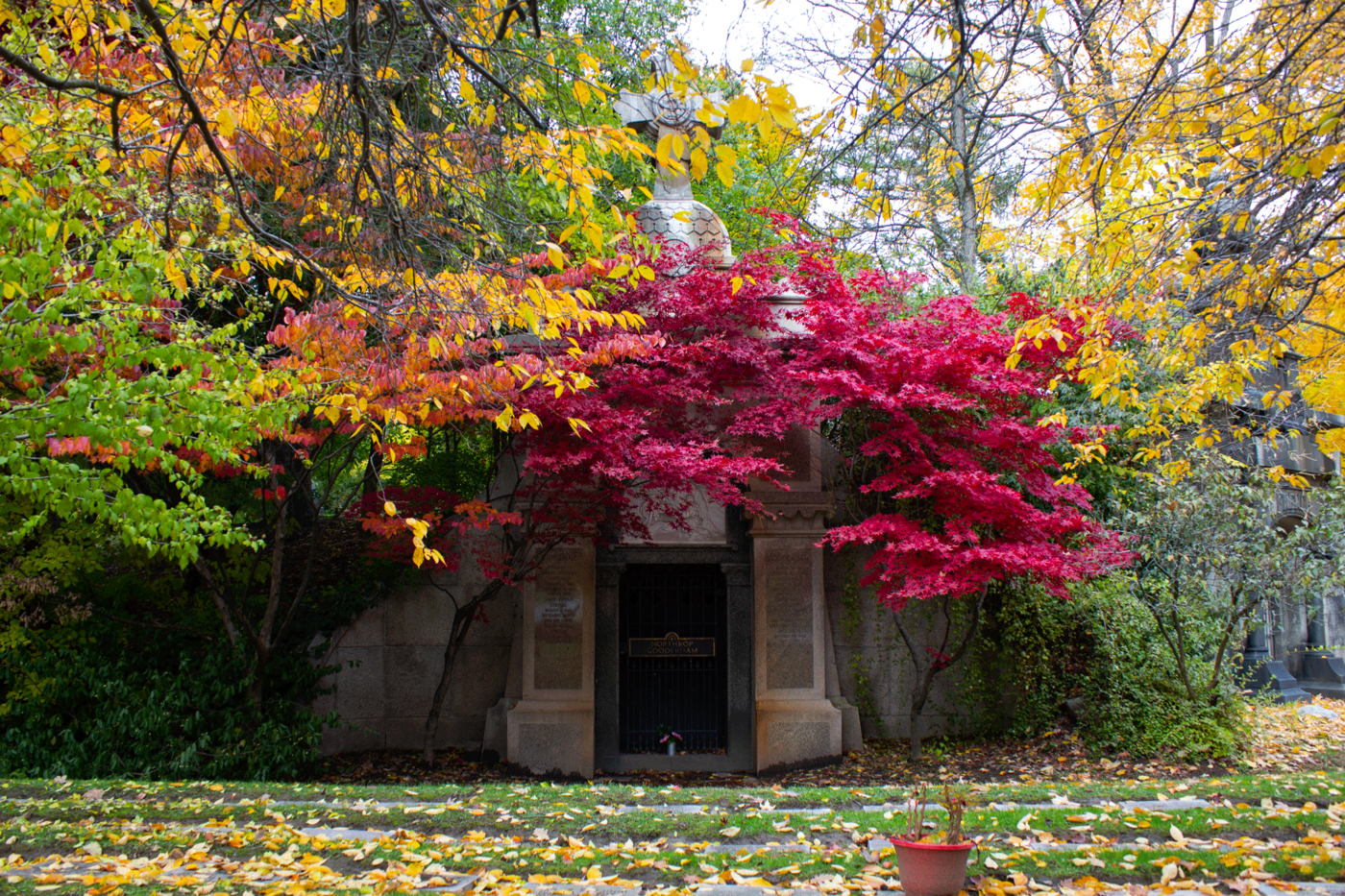 Graves like the Northrop-Gooderham mausoleum are incorporated into the natural landscape.

The Northrop-Gooderham mausoleum, built into a rolling hill in Plot T, is the joint resting place of two families whose names can best be recognized from the Northrop Lyman medicine company and Gooderham and Worts of the Distillery District.

The humble tombstone of Edmund Burke, one of Toronto's defining architects, is less obvious and requires more effort when searching on Plot S. 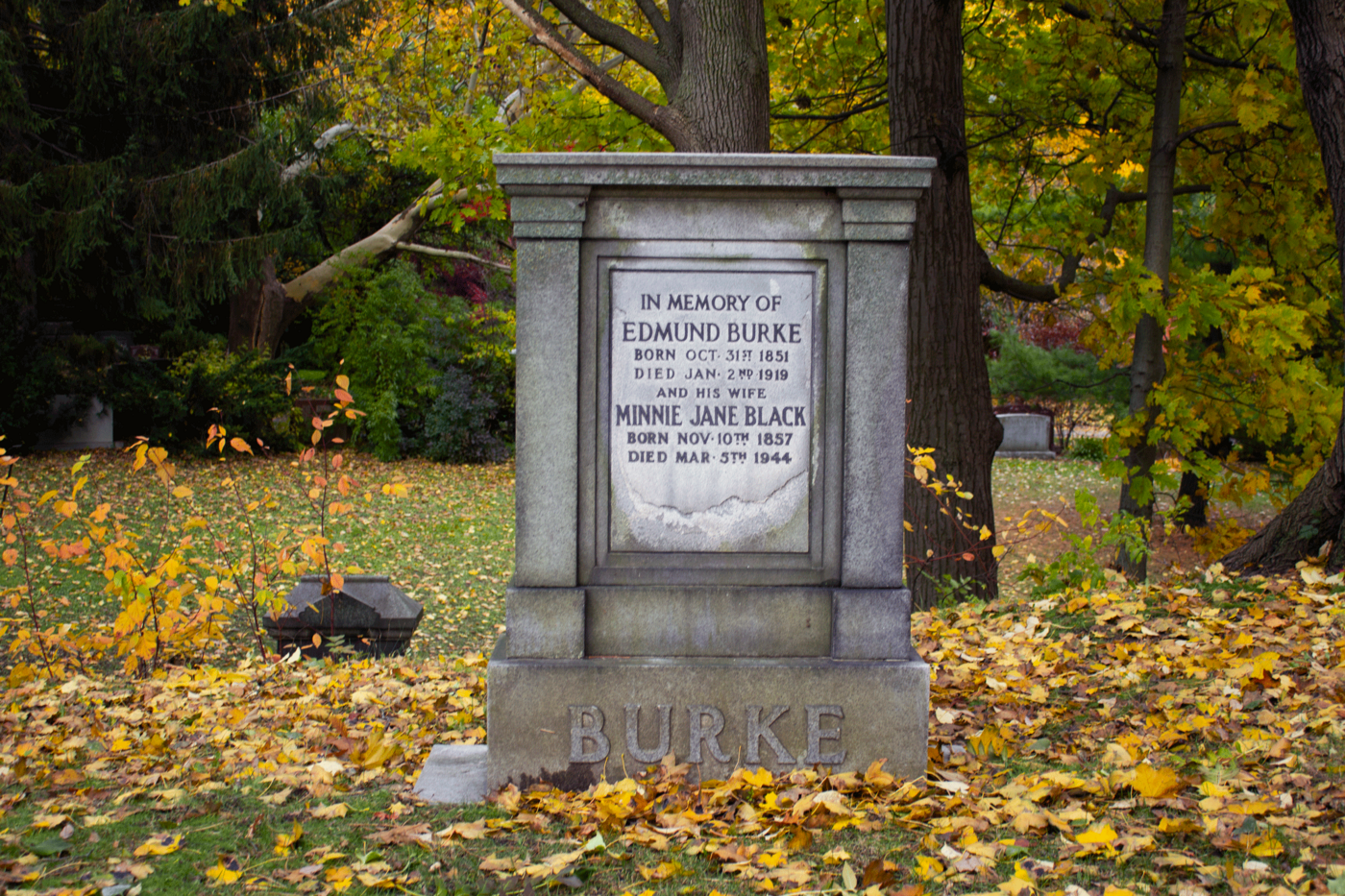 Renowned Toronto architect Edmund Burke is buried in the cemetery.

One would never think that this simple stone is the resting place of the man who drastically changed the landscape of Toronto by building the Prince Edward Viaduct. 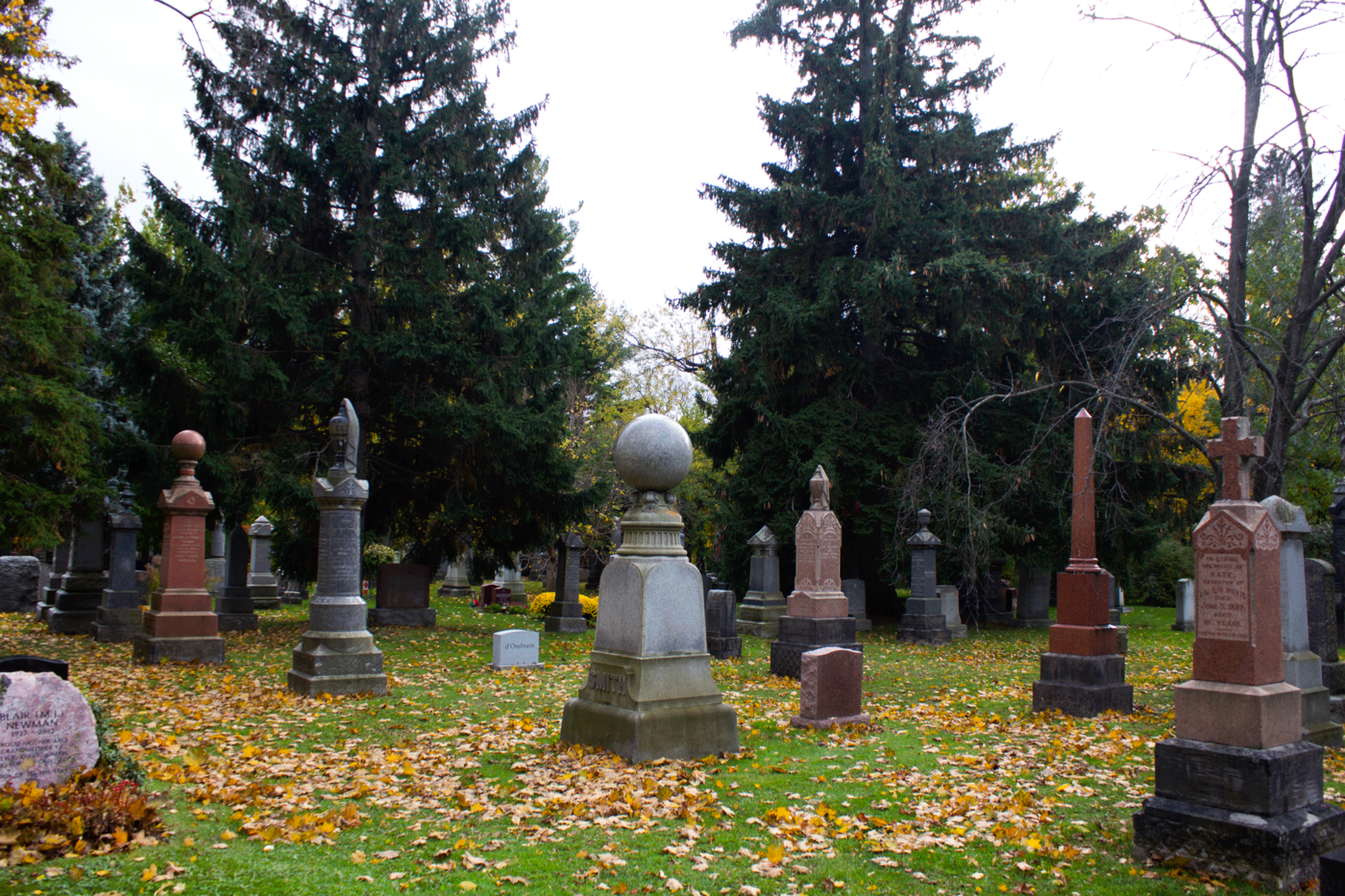 Headstones vary and become more diverse as you travel through the cemetery.

Ranging from more rugged headstones to larger, Victorian and Renaissance-style monuments for entire families, you can easily spend weeks exploring the eerie beauty of the graves here. 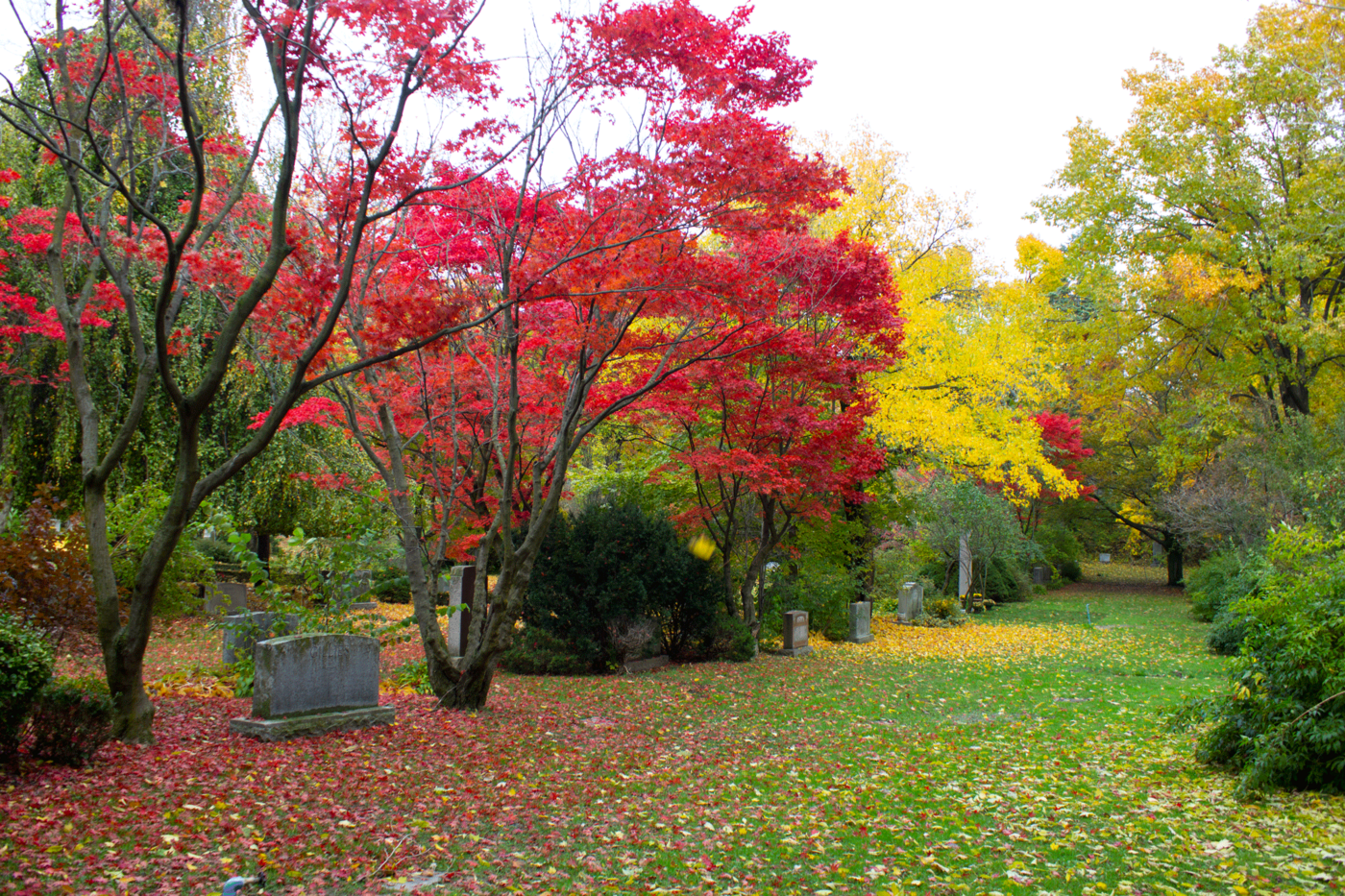 The Mount Pleasant Cemetery Grounds also acts as an arboretum.

But despite the abundance of stone and scripture, the natural wonders here can, at times, outshine the architecture: Mount Pleasant is an arboretum with an astonishing number of tree species that range in the hundreds.

Whatever can grow in this climate can be found here: from weeping willows to white elms, towering Carolina poplars, Ginkgo trees, and various maples. The latter makes this graveyard one of the most beautiful places to see fall foliage. 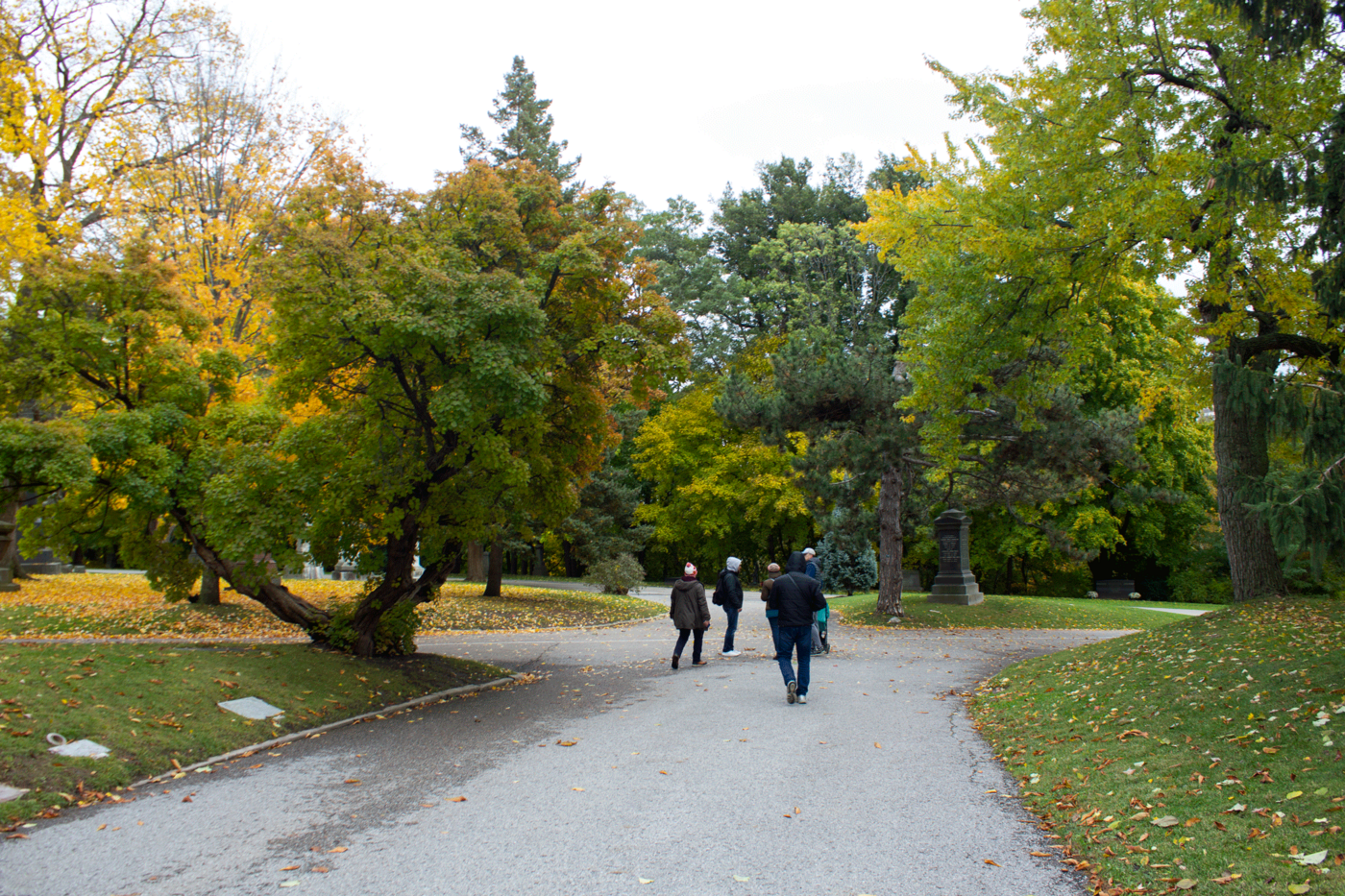 The land is a popular place for nature enthusiasts to observe hundreds of plant and tree species. 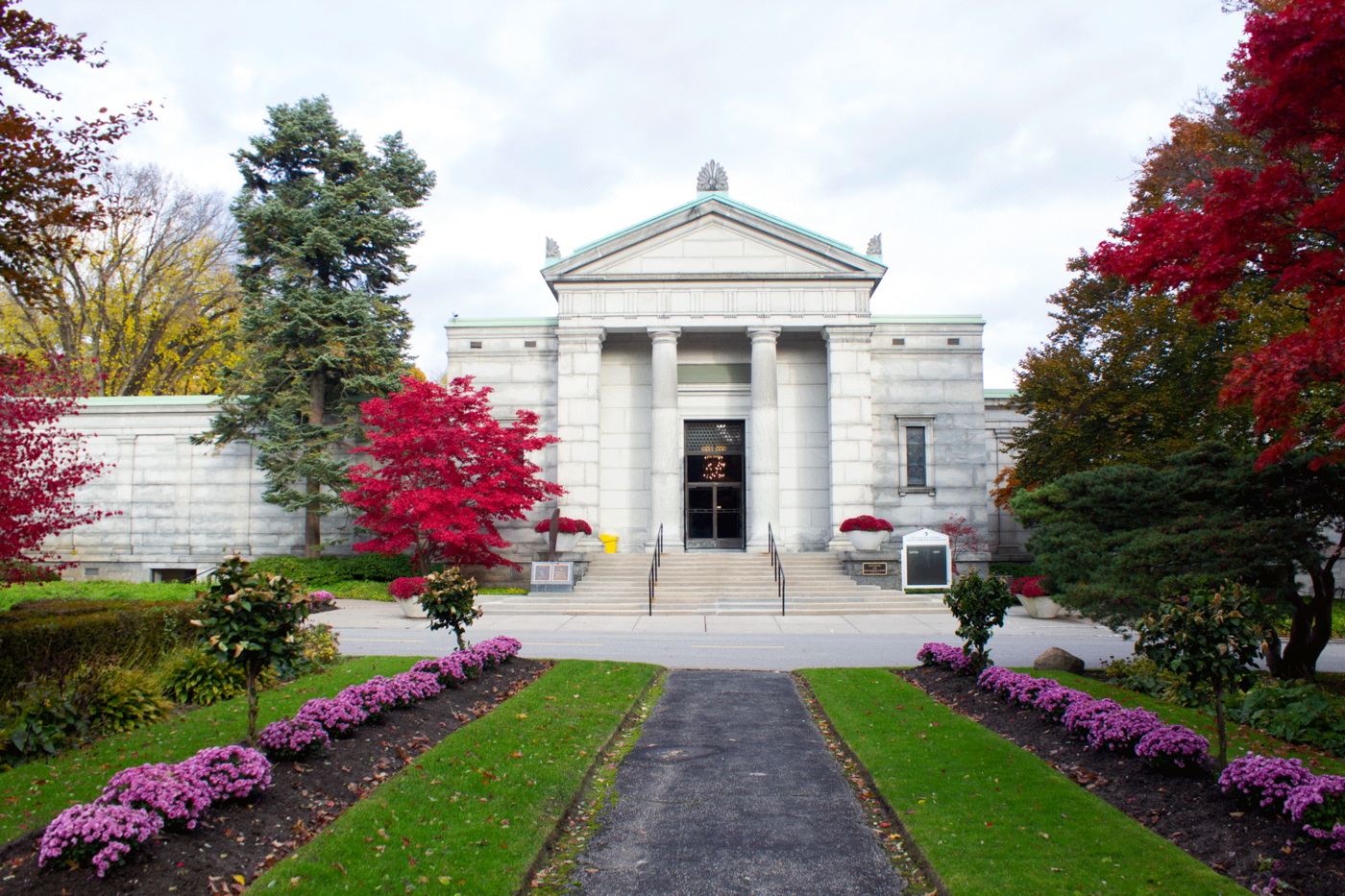 The mausoleum and crematorium is located in Plot O at the south end of the cemetery.

The granite mausoleum and crematorium can be found in the south end of the cemetery in Plot O. Built in 1920, this Georgian building features crypts of Italian marble and bronze inside, with the crematorium being a newer addition in 1972. 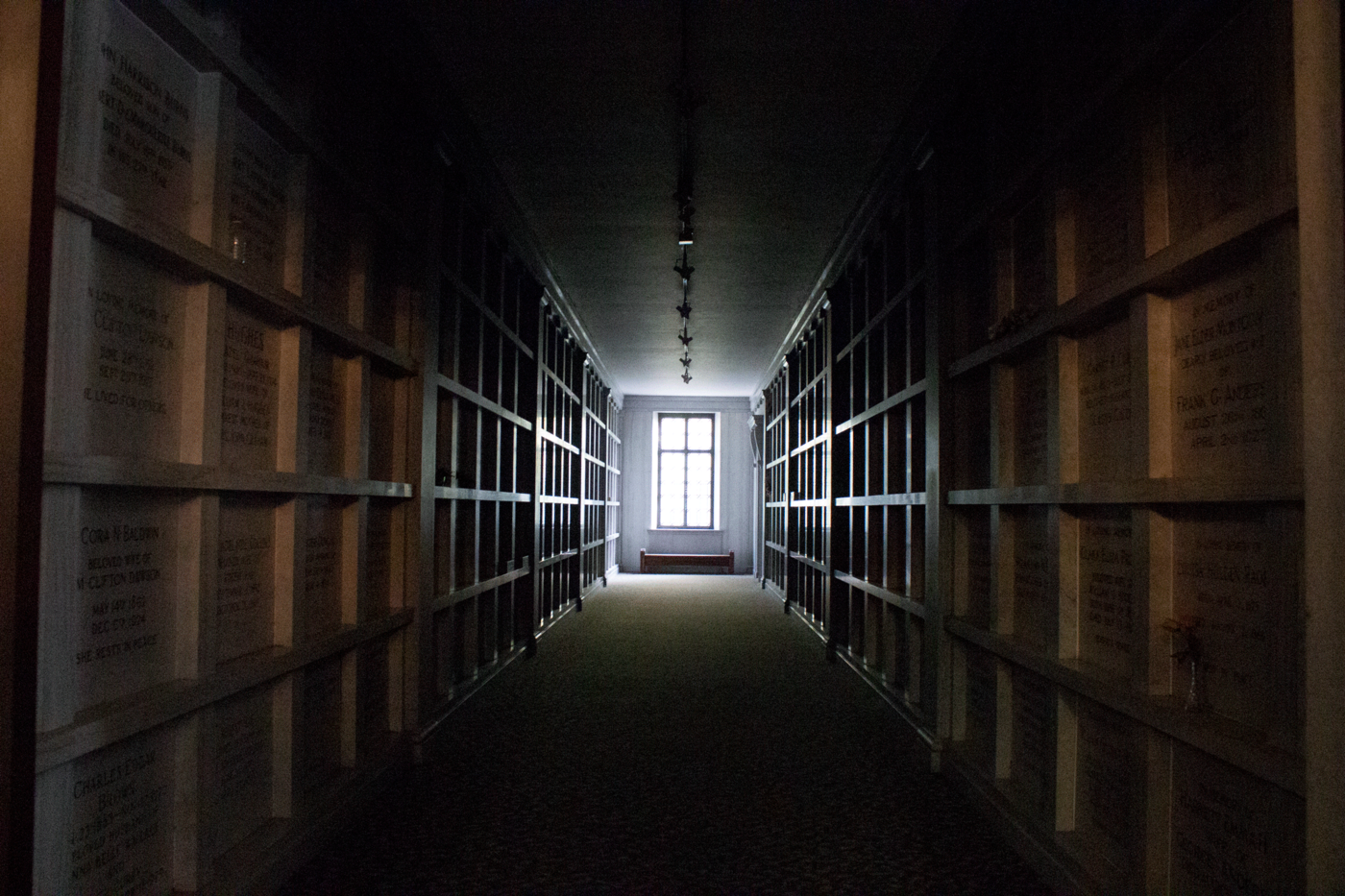 There are hundreds of crypts in the mausoleum.

When it's open, you can visit both the upper and lower floors, and perhaps pay respects to Canada's most famous war hero William G. Barker in Room B, Crypt B of the mausoleum. 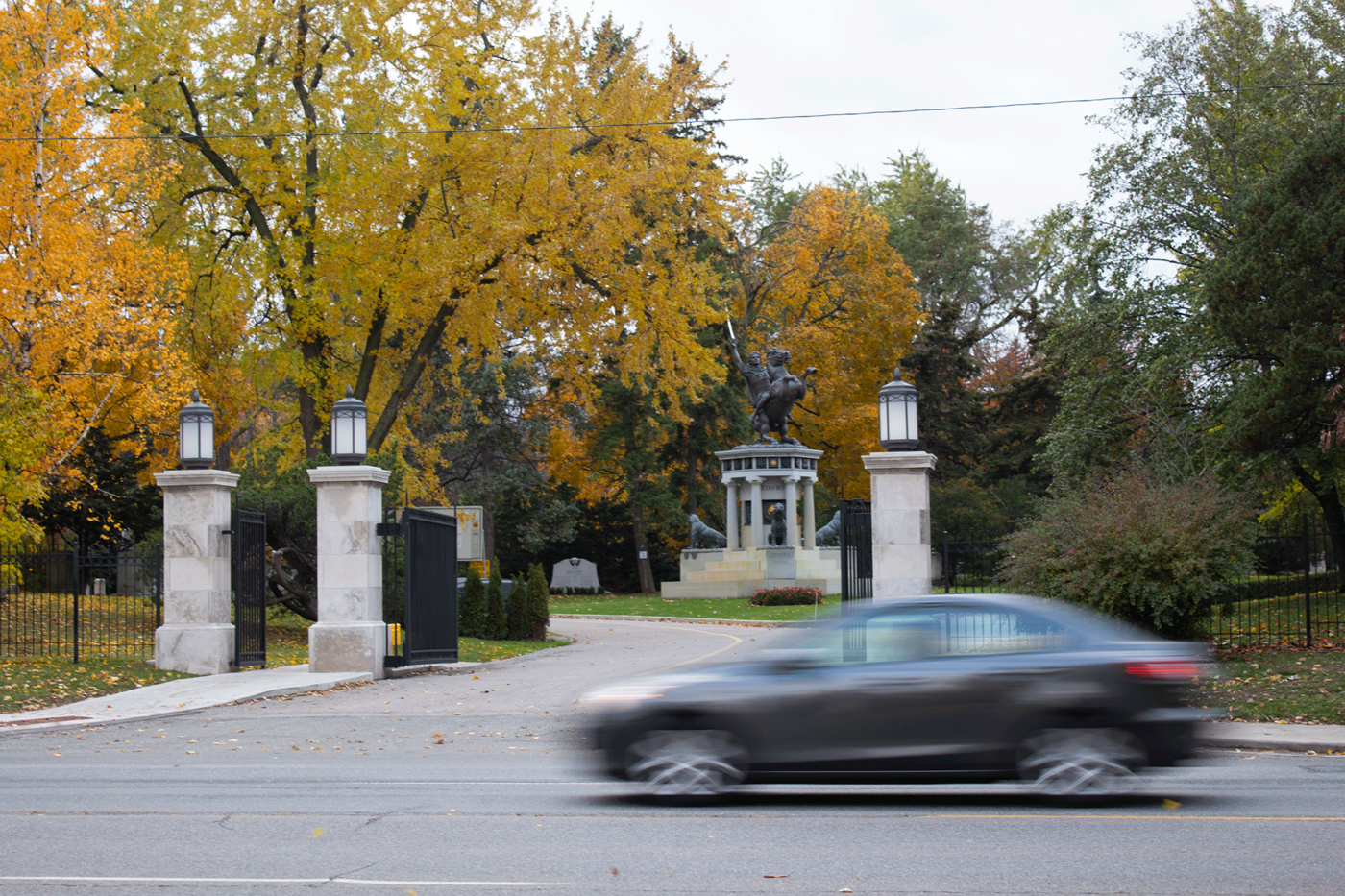 Mount Pleasant Road marks the dividing point between the east and west sections of the cemetery.

Once you reach the midway point of Mount Pleasant Road, the best way to reach the other side is to head north and cross using the overpass. 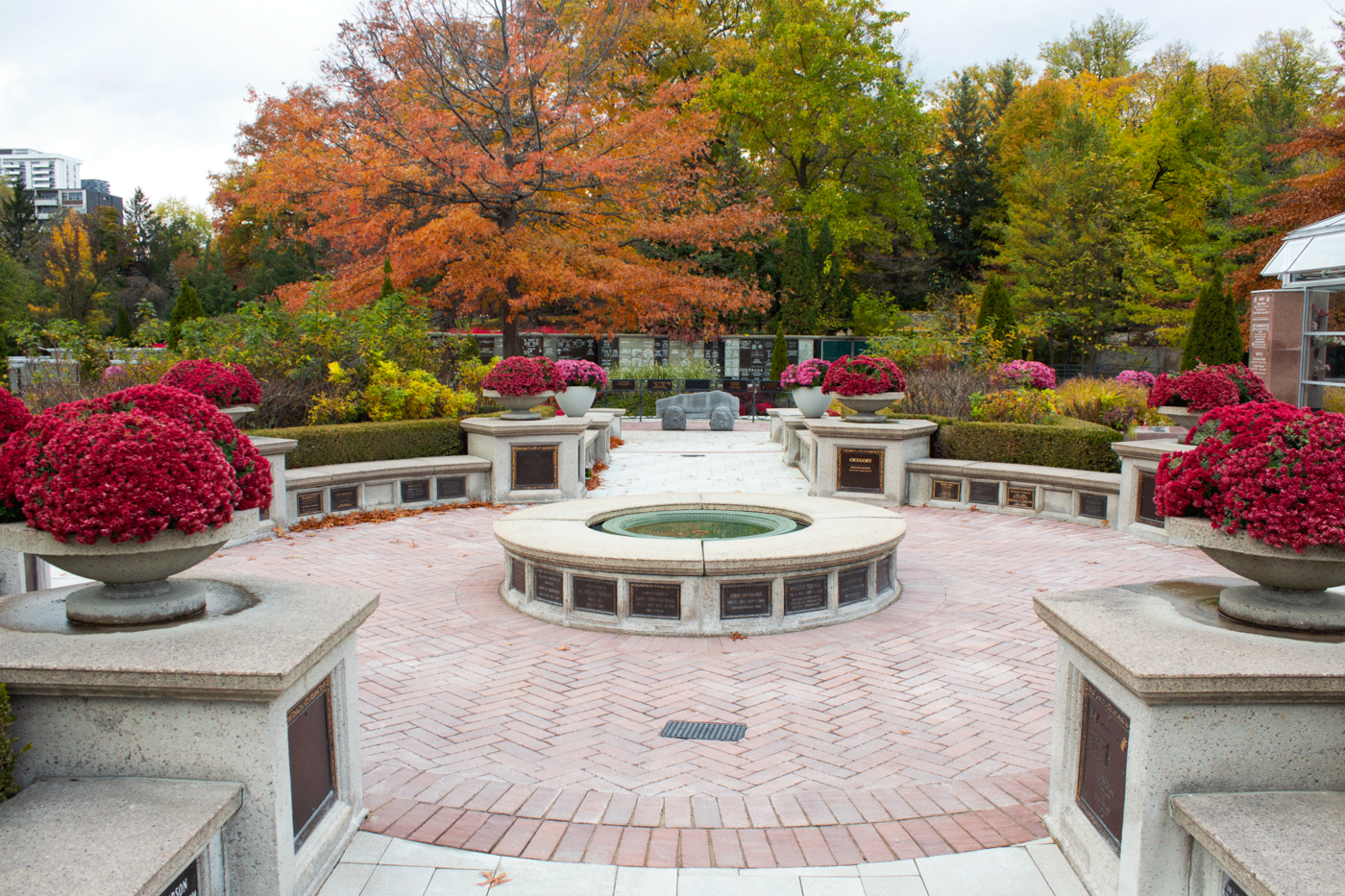 The eastern section of Mount Pleasant is less old but offers relaxing sites like the Garden of Remembrance.

This eastern portion is a much faster walk with significantly fewer historical figures, though spots like the Garden of Remembrance with its Pool of Reflection, a glass conservatory, and a forest of mature trees where ashes of the dead are buried.

In its entirety, this magnificent cemetery can take anywhere between an hour and a half to as many hours as you want, depending on your speed.

While some may want to see this graveyard all in one go, the mysteries of this historic land can be an exploration drawn out over years if you let it.

Make sure to read the COVID-19 protocols before visiting. 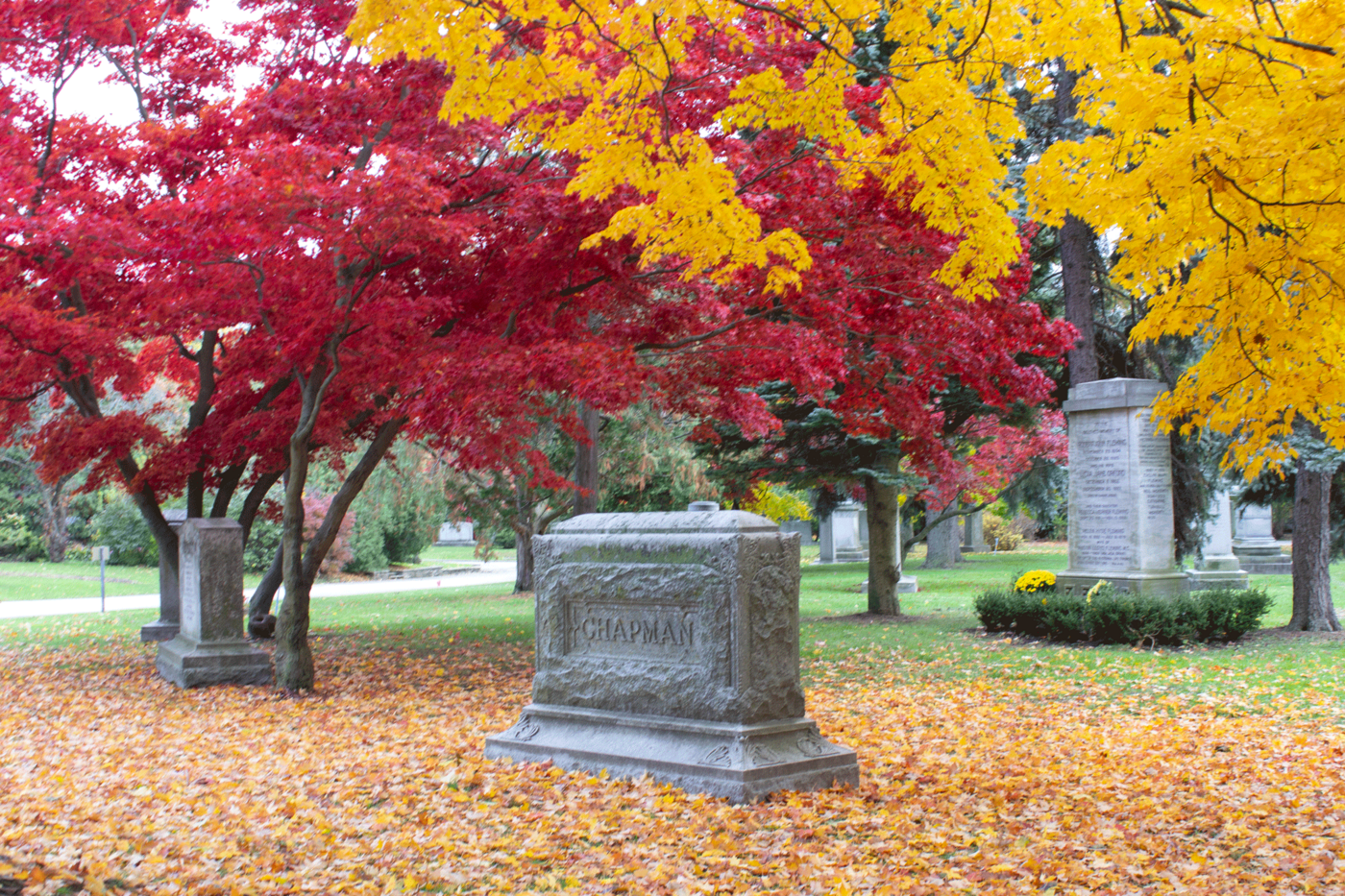