Ministry of Transportation Caroline Mulroney confirmed the news Friday morning during a press conference in York Region, billing the decision as an important milestone for the $5.6-billion transit project — one of four high profile rapid-transit initiatives unveiled by the Ford government in April of 2019.

While initially planned to include six stations, the Yonge North subway extension project was recently pared back to only four, though it will still extend Line 1 by nearly eight kilometres into York Region.

"A new station in Thornhill at the intersection of Clark Avenue and Yonge Street will be included as the fourth station on the Yonge North Subway Extension," reads an announcement from Metrolinx, the provincial transit agency that will oversee and build the extension.

"The Yonge North Subway Extension will make it faster and easier to get around York Region and open up new ways to travel around the entire Greater Golden Horseshoe by extending TTC Line 1 subway service roughly eight kilometres north from Finch Station, passing through Vaughan and Markham on its way to Richmond Hill." 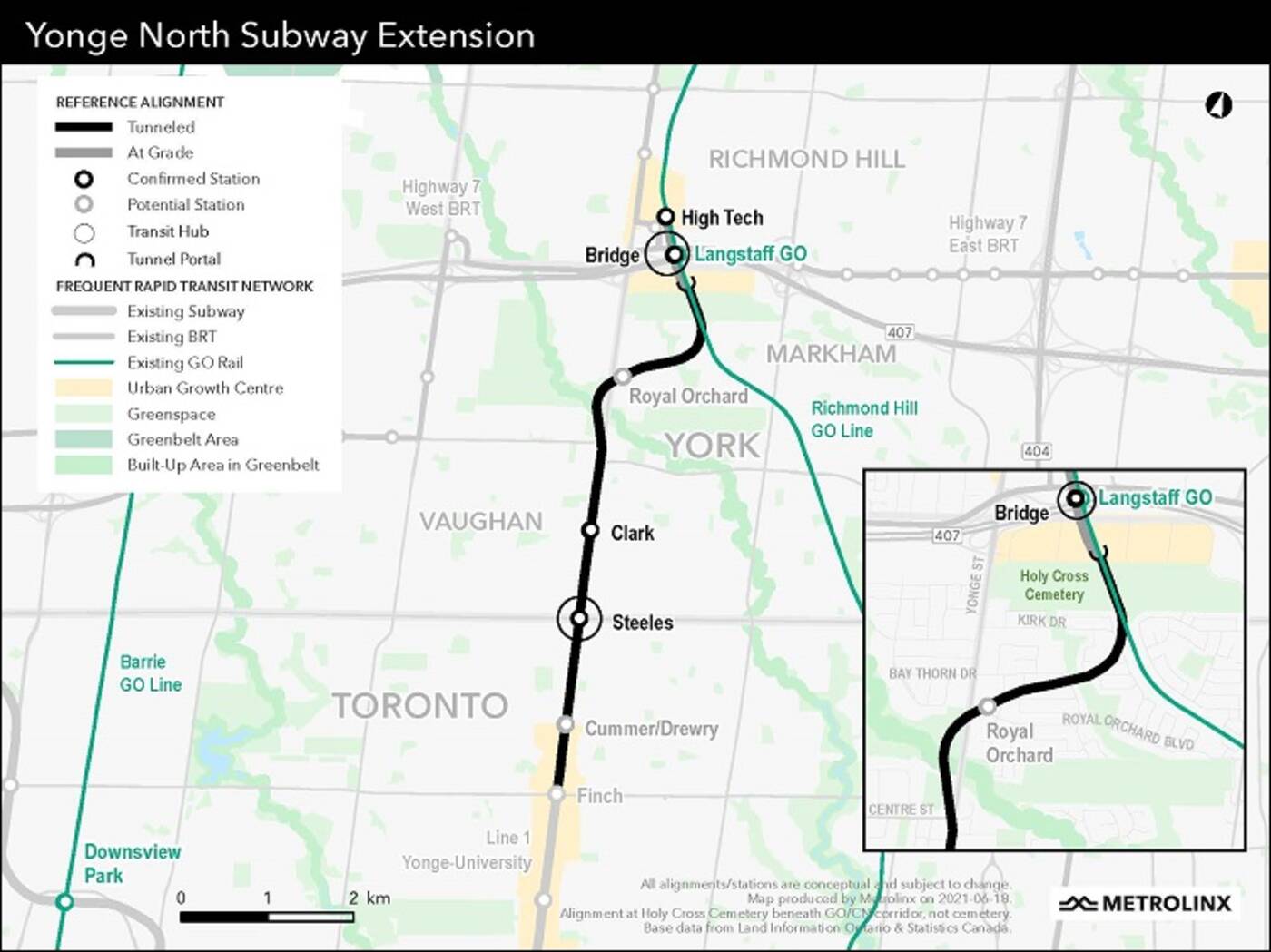 Clark beat out Cummer and Royal Orchard as potential options for the new subway extension's fourth stop. Image via Metrolinx.

Clark Station will join Steeles, Bridge and High Tech stations to, as Metrolinx puts it, "serve growing neighbourhoods along the Yonge Street corridor and beyond, becoming part of an expansive map of integrated projects, routes and even transit carriers that are rewiring the way riders can easily get to points all around the Greater Golden Horseshoe Region of Ontario."

While plans are now set for a four-stop extension, Metrolinx says it isn't ruling out the possibility of adding a fifth station one day, should funding make that possible.

The addition of Clark alone, however, is expected to benefit the entire region by serving some 2,500 riders per hour during the peak of the morning rush. The idea is to get more people out of their cars and onto public transit, reducing both traffic congestion and carbon emissions.

To help facilitate this, the government says that it will build new, separated bike lanes along Clark Avenue extending from west of Dufferin Street all the way to Yonge, making it easier for commuters to arrive by bicycle.

Fantastic news — Following our federal government’s commitment of $2.24 billion for the Yonge North Subway Extension, we have announced the construction of the new Clark Station, a great choice for enhancing connectivity across #YorkRegion! https://t.co/DV0Bouyb5t

Local leaders in Thornhill are obviously thrilled that the province chose Clark over the other two proposed options: A stop at Cummer Avenue in Toronto or Royal Orchard Boulevard in York.

"For over a decade, I have been working hard to get better public transit built in our community — and I am pleased our government is delivering results by building a subway station at Yonge and Clark in Thornhill!" said Thornhill MPP Gila Martow in a statement Friday morning.

"I stand with our local community in thanking Transportation Minister Caroline Mulroney for ensuring Thornhill’s concerns are being heard — but there is still work to be done."

Indeed, there is much work to be done on all of the Ford government's proposed transit projects — though the recent announcement of some $12 billion in funding from the federal government should help keep things moving along.

If all goes well, the Yonge North subway extension is expected to be complete by 2030 and will provide an important public transit connection to areas served by a planned extension of the Viva Orange bus rapid transit line (communities along Highway 7.)

Metrolinx says that one of those areas, Promenade Centre, is expected to be home to more than 11,000 people and almost 6,000 jobs in the years to come. Strong transit connections will only help emerging GTA communities such as this one grow and thrive.