Centre Island Beach on The Toronto Islands is a go-to destination across the lake once the warm months hit, filling up with beachgoers and outdoor activity seekers each and every summer.

Made up of 15 small islands just offshore from the busy streets of downtown,the Toronto Islands is where that laid-back island life that you just can't find in the city abounds. 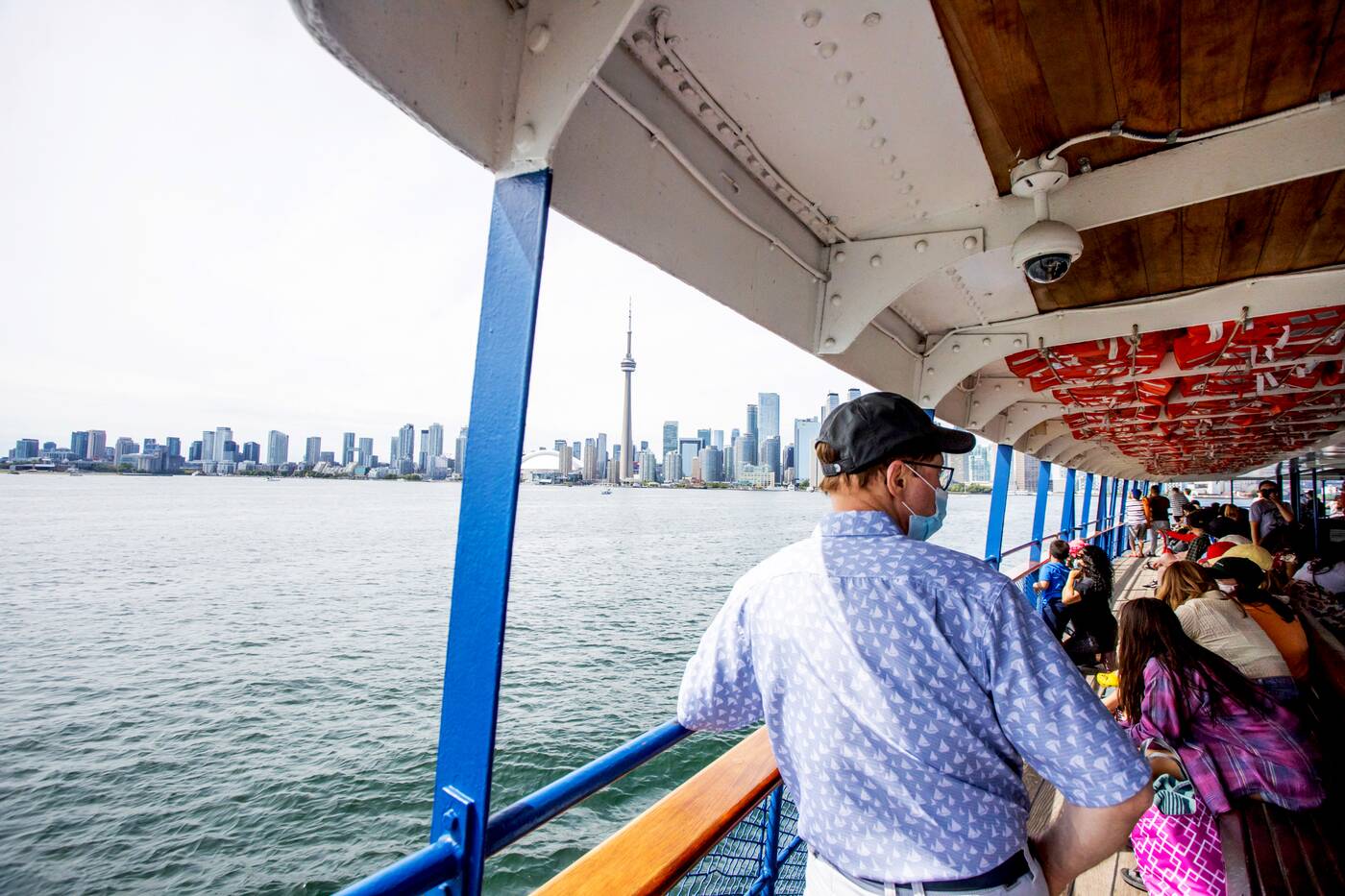 Centre Island is a short 15-minute ferry ride from the downtown core.

After the short 15-minute ferry ride over, which is an even shorter trip on a water taxi, your only worry for the day will be an uneven tan. 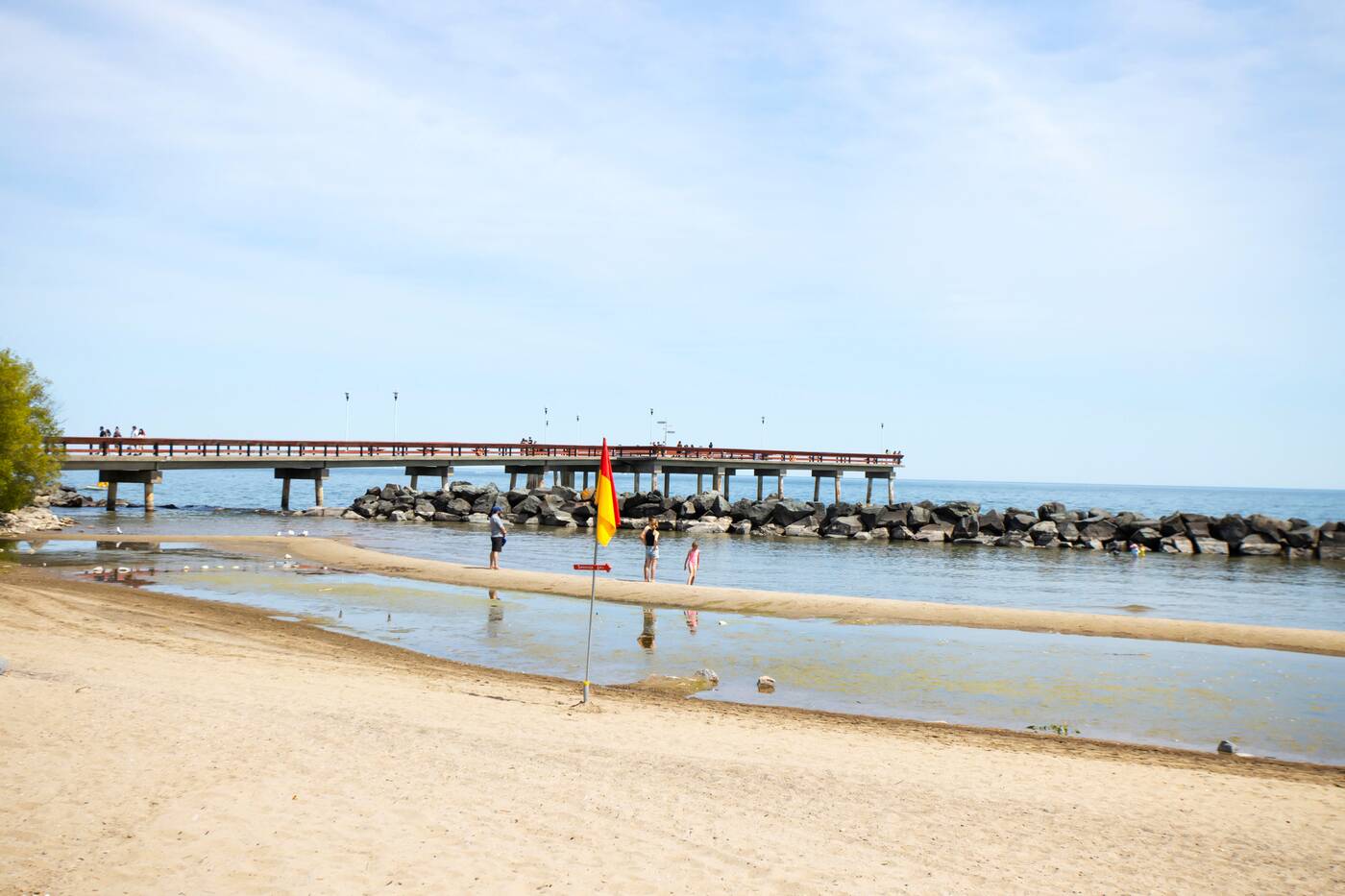 Centre Island Beach is the busiest of the four beaches on the Toronto Islands.

There are three beaches on the archipelago, four if you count the smaller Gibraltar Point Beach, with Centre Island Beach easily the most frequented of them all. 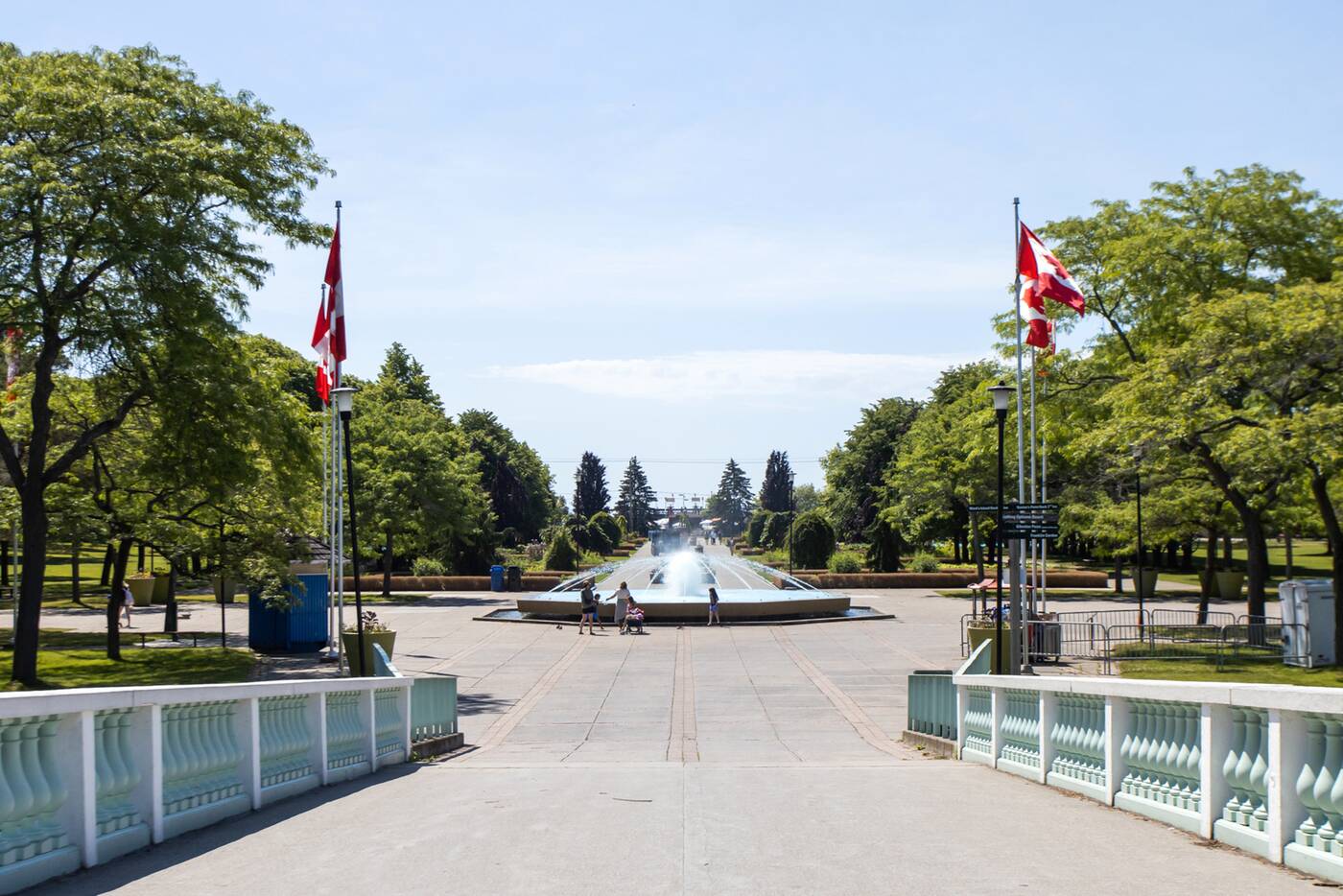 Follow the walking path from the ferry docks over the pedestrian bridge to reach Centre Island Beach.

From the ferry docks, follow the wide walking path known as the "Avenue of the Island," over the pedestrian bridge and you'll spot the beach right ahead of you.

Situated on the largest of the islands, Centre Beach is also the most family-friendly, featuring several different nearby activities like a kitschy amusement park, waterpark and outdoor maze. 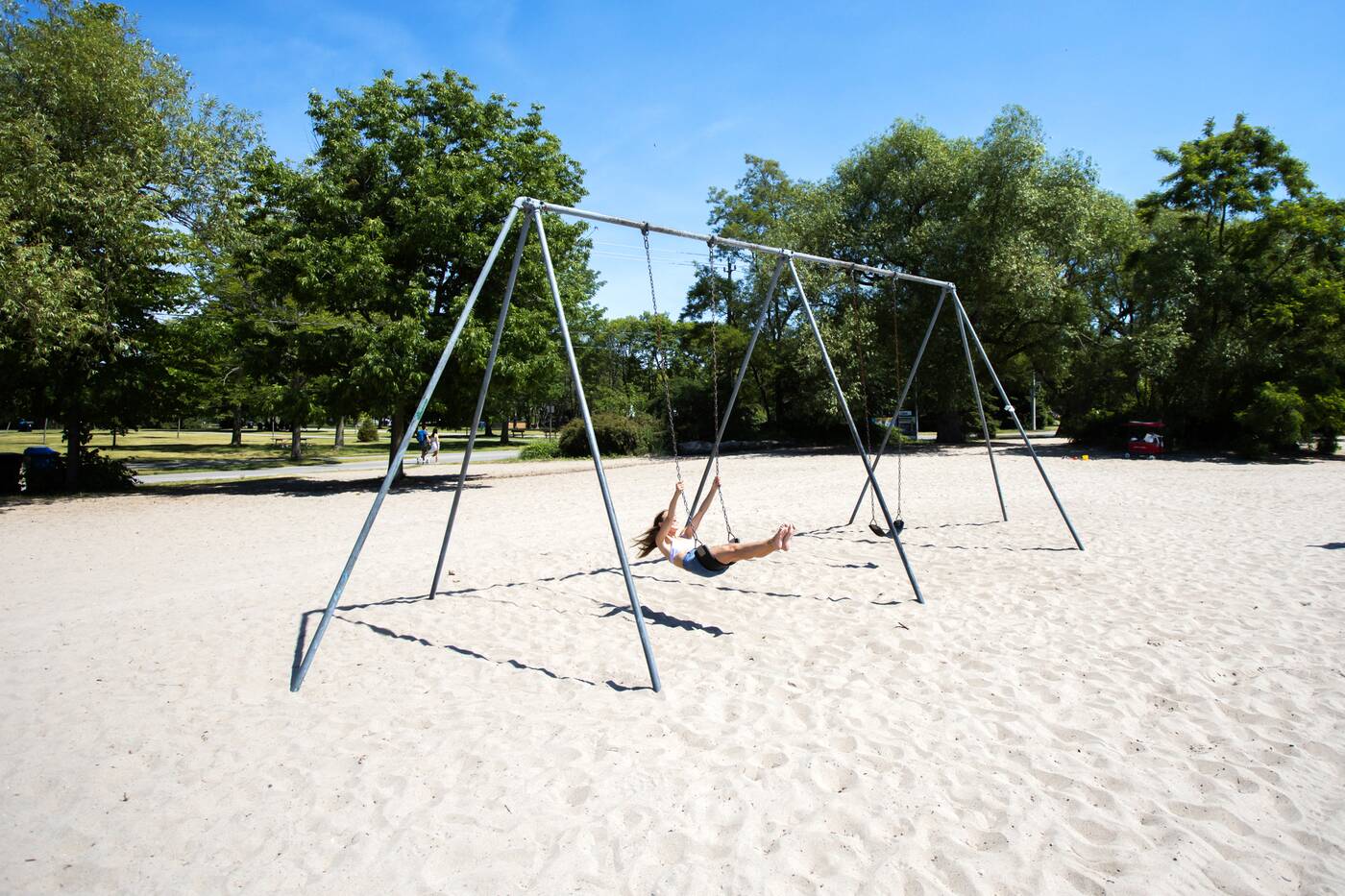 A set of swings is perfectly placed right on the beach.

There's also a set of swings right on the sand where both kids, as well as those past their prime swinging years, enjoy a swing with a waterfront view. 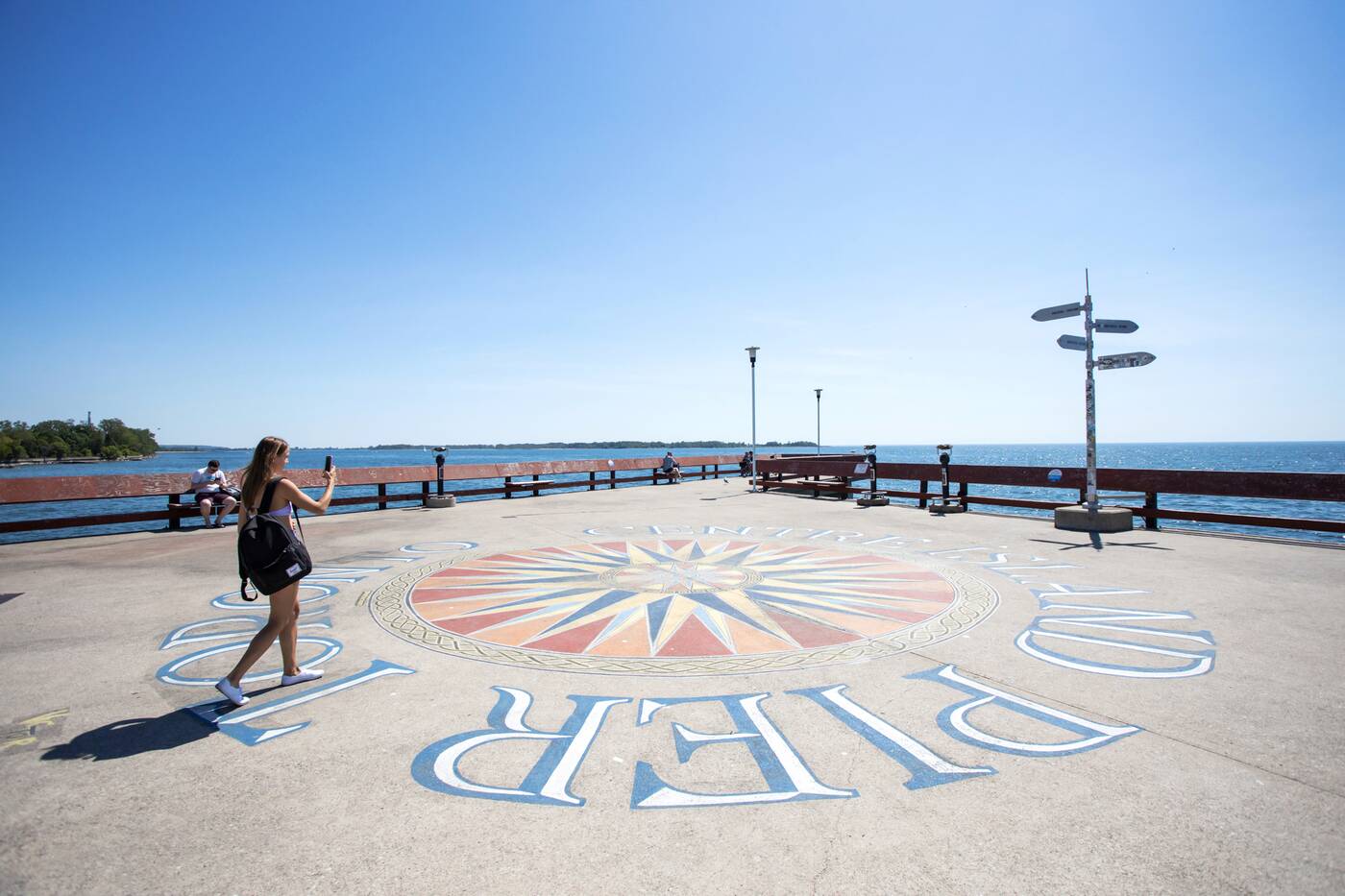 The beach extends east and west of the Centre Island Pier.

The beach stretches east and west of the Centre Island Pier offering more than enough soft sand to share with the crowds found here every weekend in the summer. 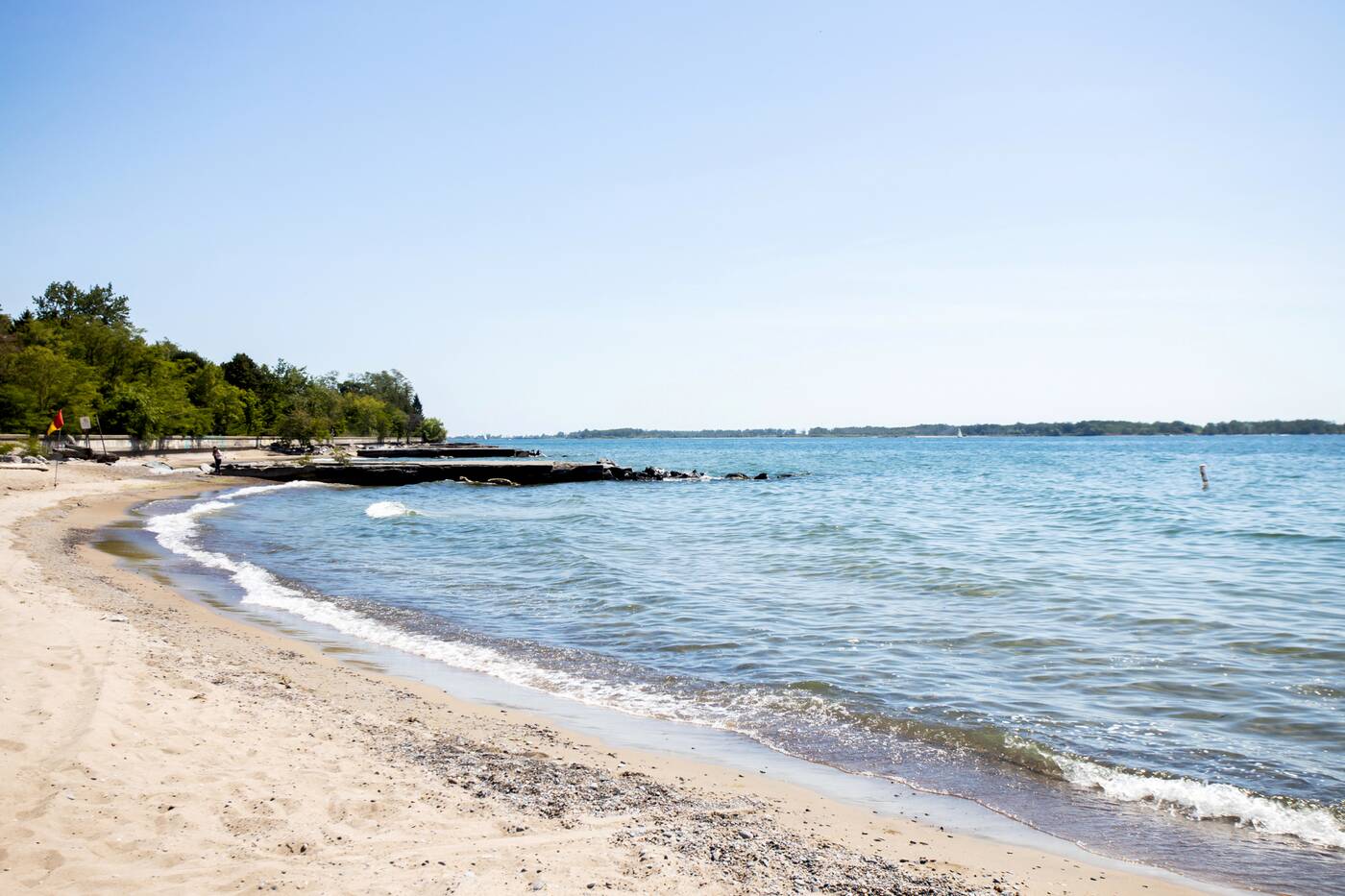 Off to the east of the pier, there's a shorter stretch of more beach.

Most of the beach exists west of the pier but the smaller eastern portion of sand will also fill up just as fast. 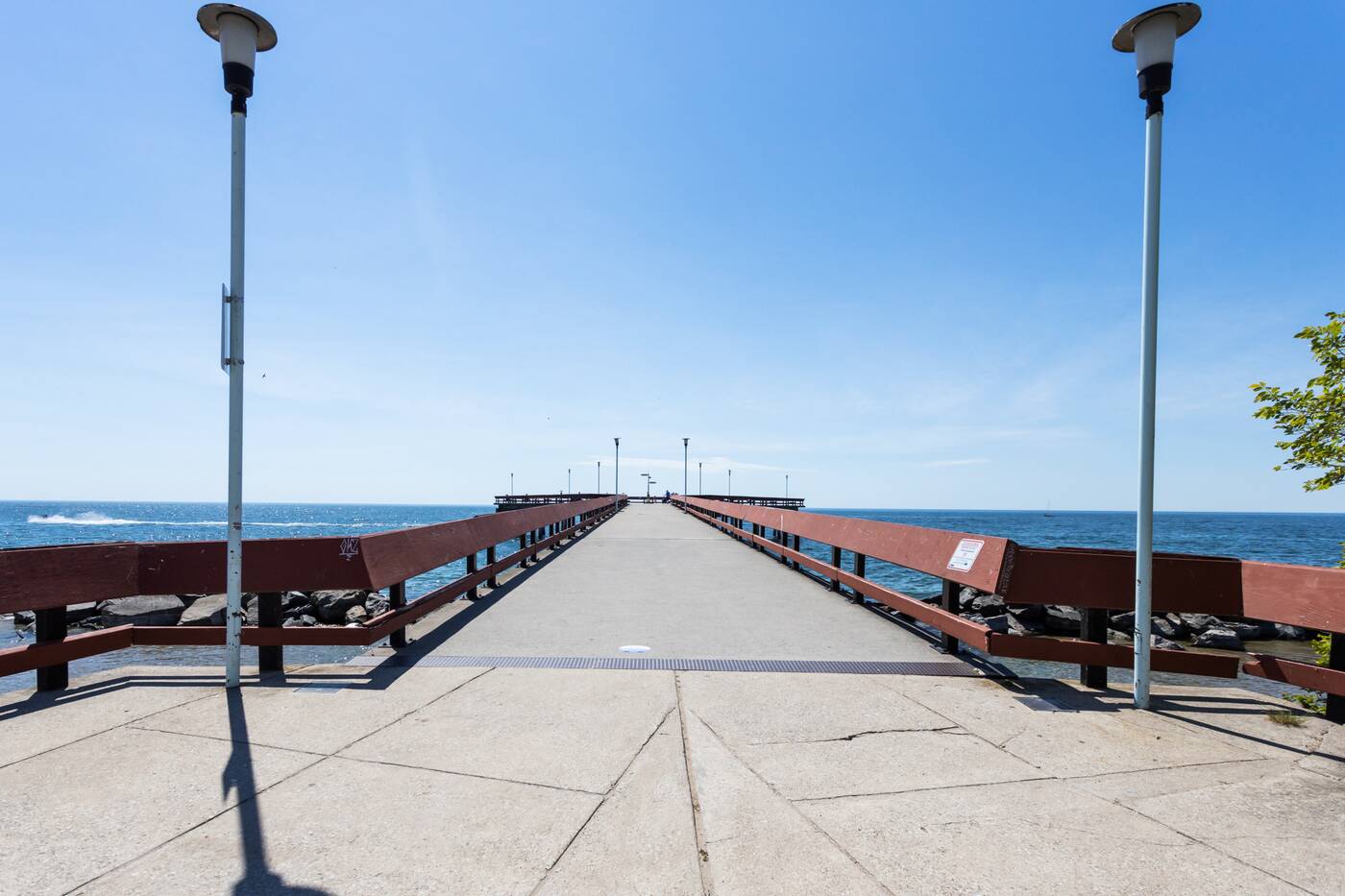 The long pier at the beach provides one of the best lookout points on the island.

Take a walk down to the end of the pier for the best vantage point of the lake on all of the island. Jutting far into the water, the lookout comes with binoculars and benches lining the edges. 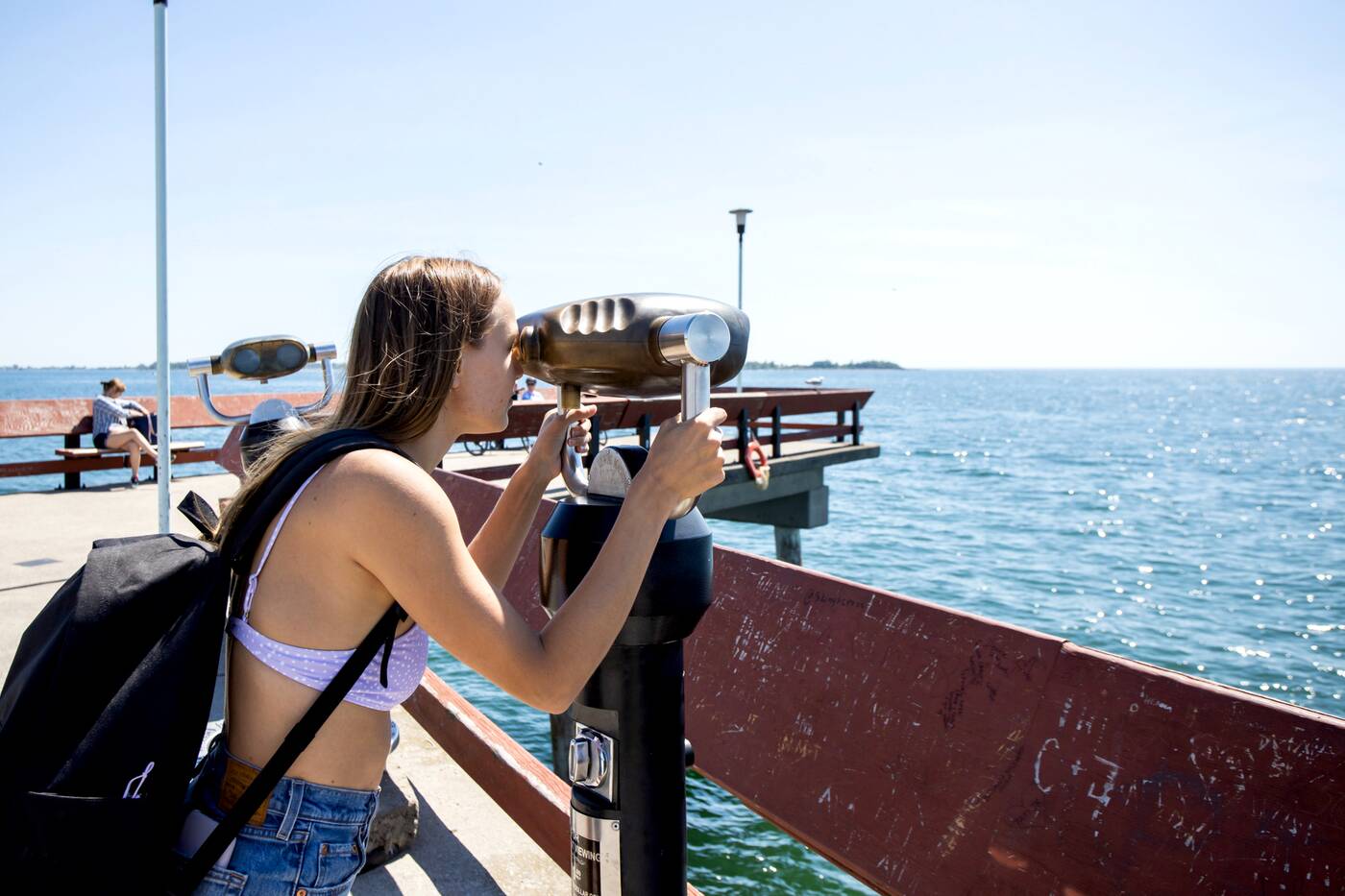 Binoculars and benches can be found at the end of the pier.

Blue hues go as far as the eye can see, so it's a great spot to sit, take in the view for a while, and grab some photos for the gram. 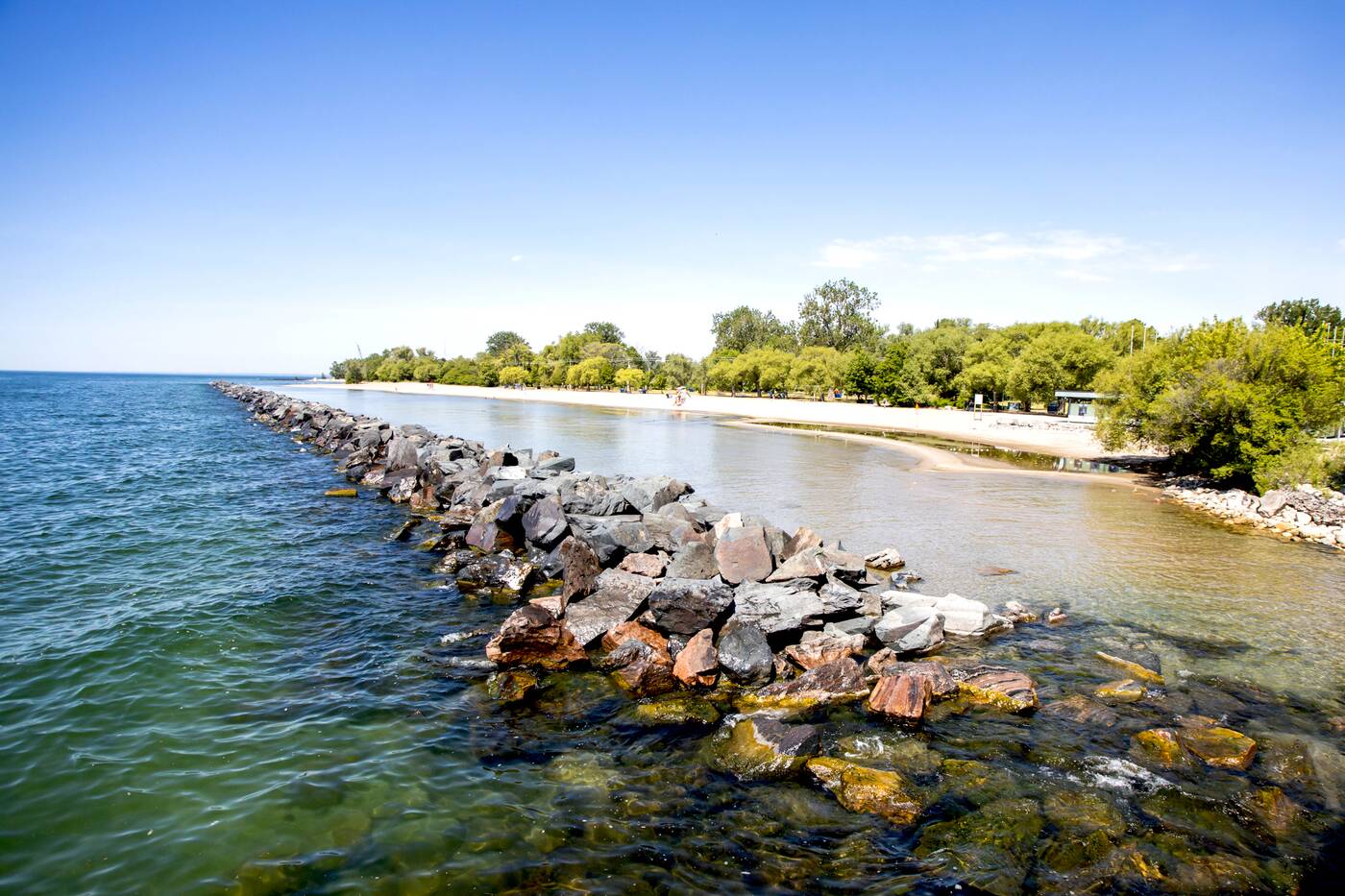 The rocky breakwall keeps water near the shore and big waves from reaching the beach.

Visible off the edges of the pier, the breakwall of big rock boulders help to keep the strong waves at bay and water close to the shore. The blue flag beach offers great swimming, with fewer rocks and murk the further you get from the pier. 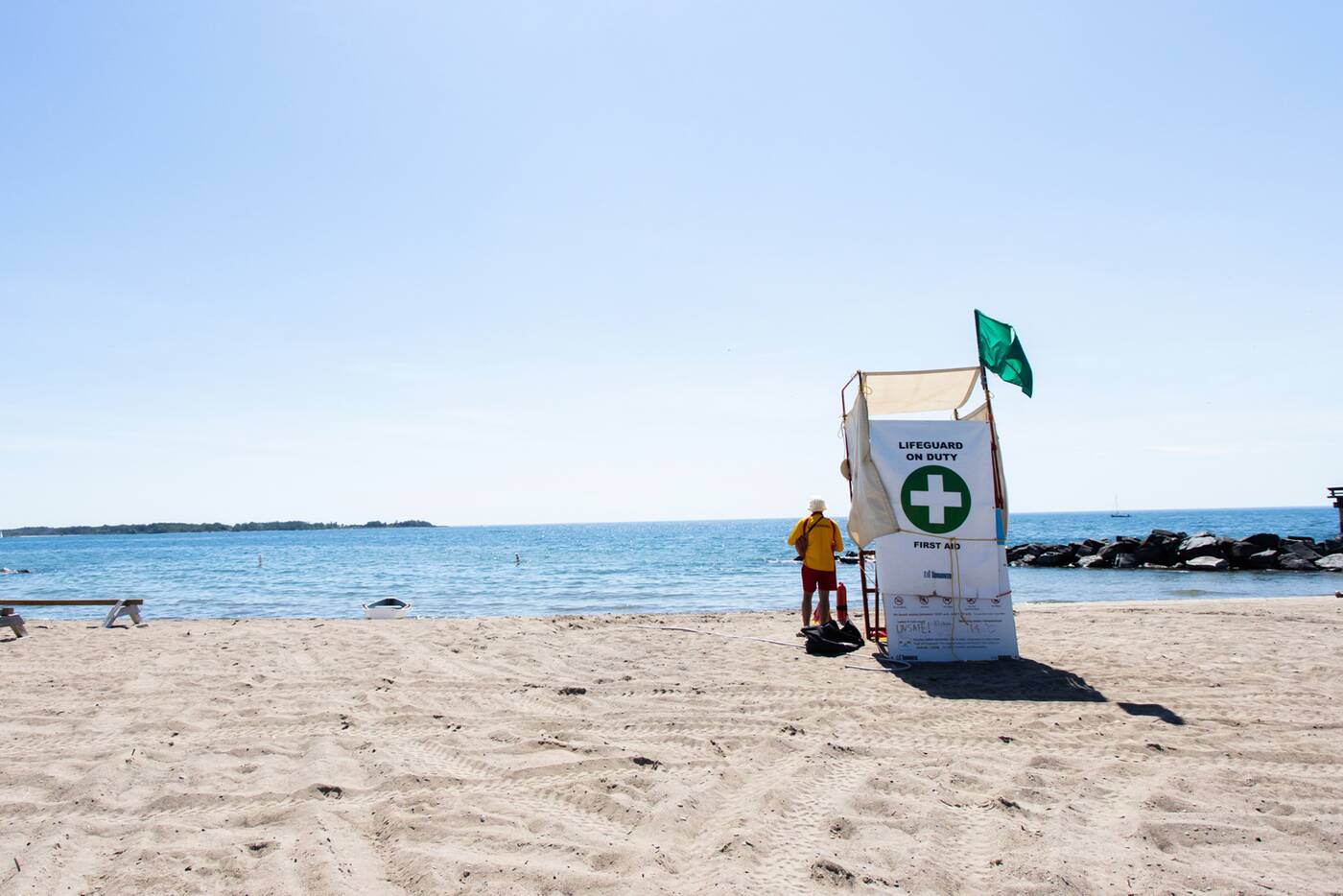 Just check on the E Coli levels before heading out to make sure it's safe and only take a dip when a lifeguard is on duty from 11:30 a.m. to 6:30 p.m. every day from June to Labour Day. 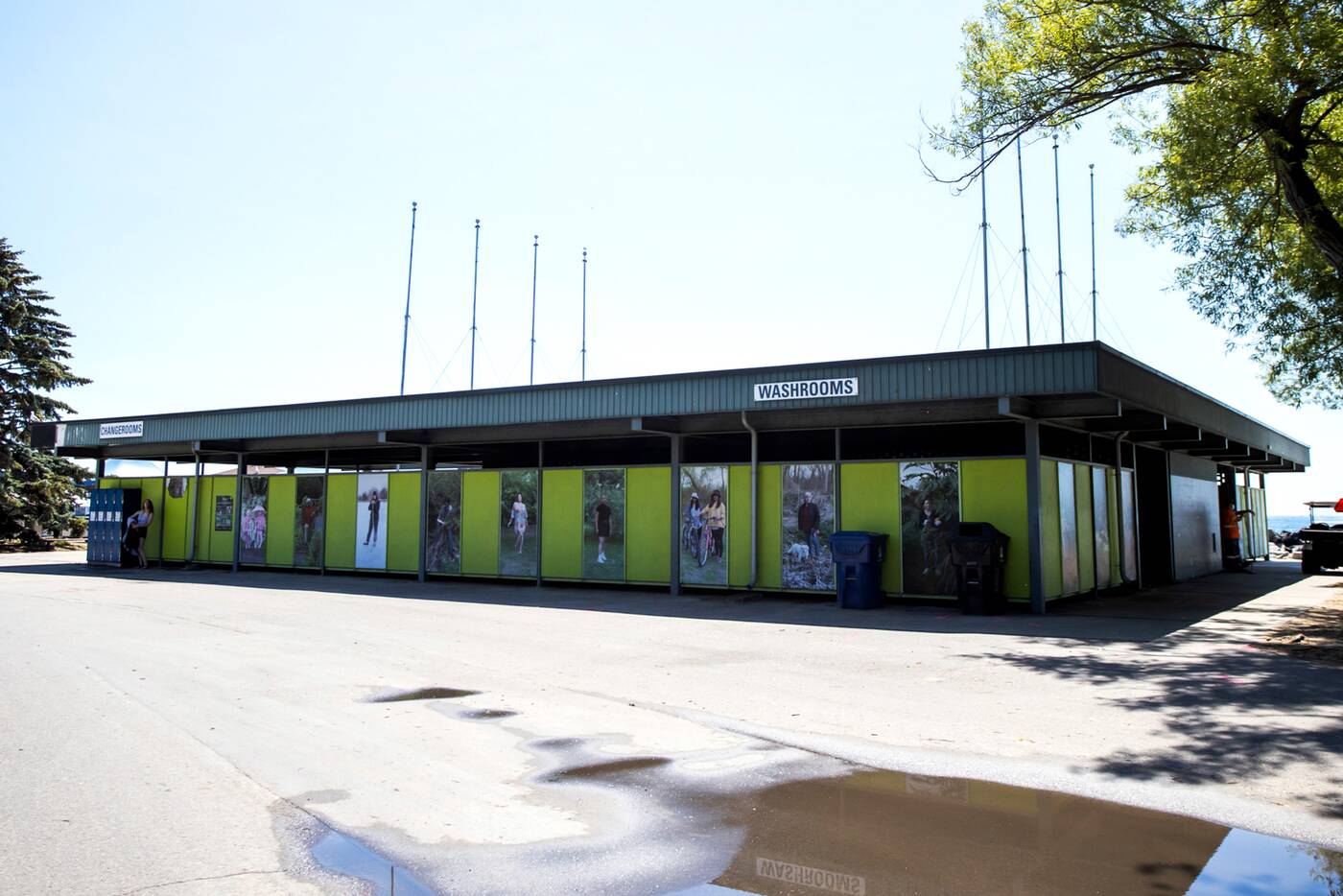 Washrooms, lockers and changing rooms are on the beach for your convenience.

If you missed the washroom across from the Pizza Pizza stand near the ferry dock when you arrived, there's extra changing rooms, lockers and washrooms on the beach next to the pier. 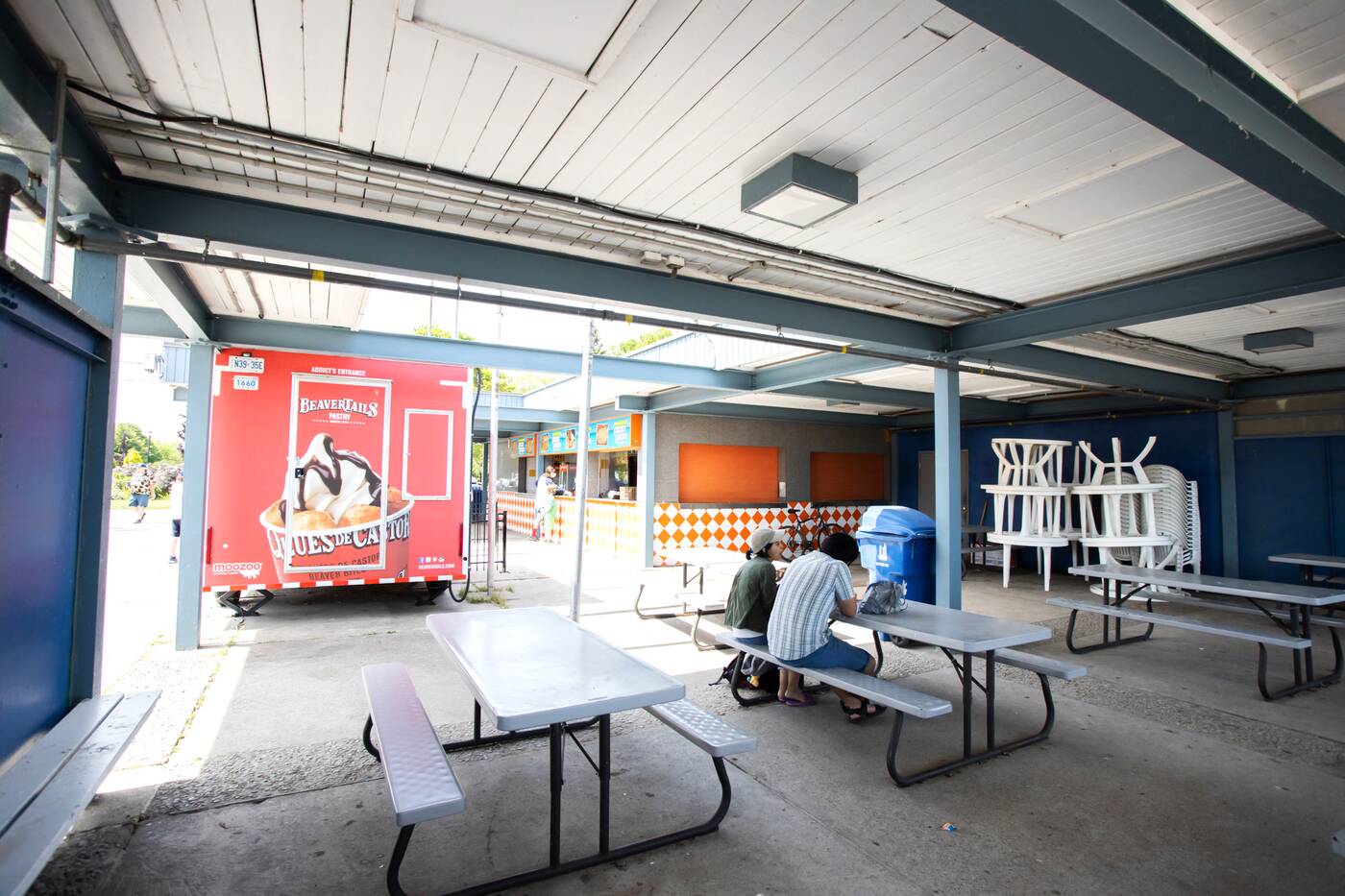 There are plenty of concessions on the beach including Toronto Island BBQ & Beer Co., The Greek Grill and BeaverTails.

Snacks and fast food options are available at the concessions should you get hungry.

Grab some barbecue from Toronto Island BBQ & Beer Co., souvlaki from The Greek Grill, or a truly Canadian treat at BeaverTails. Prices tend to be a little pricy, so packing a picnic from home might be the way to go. 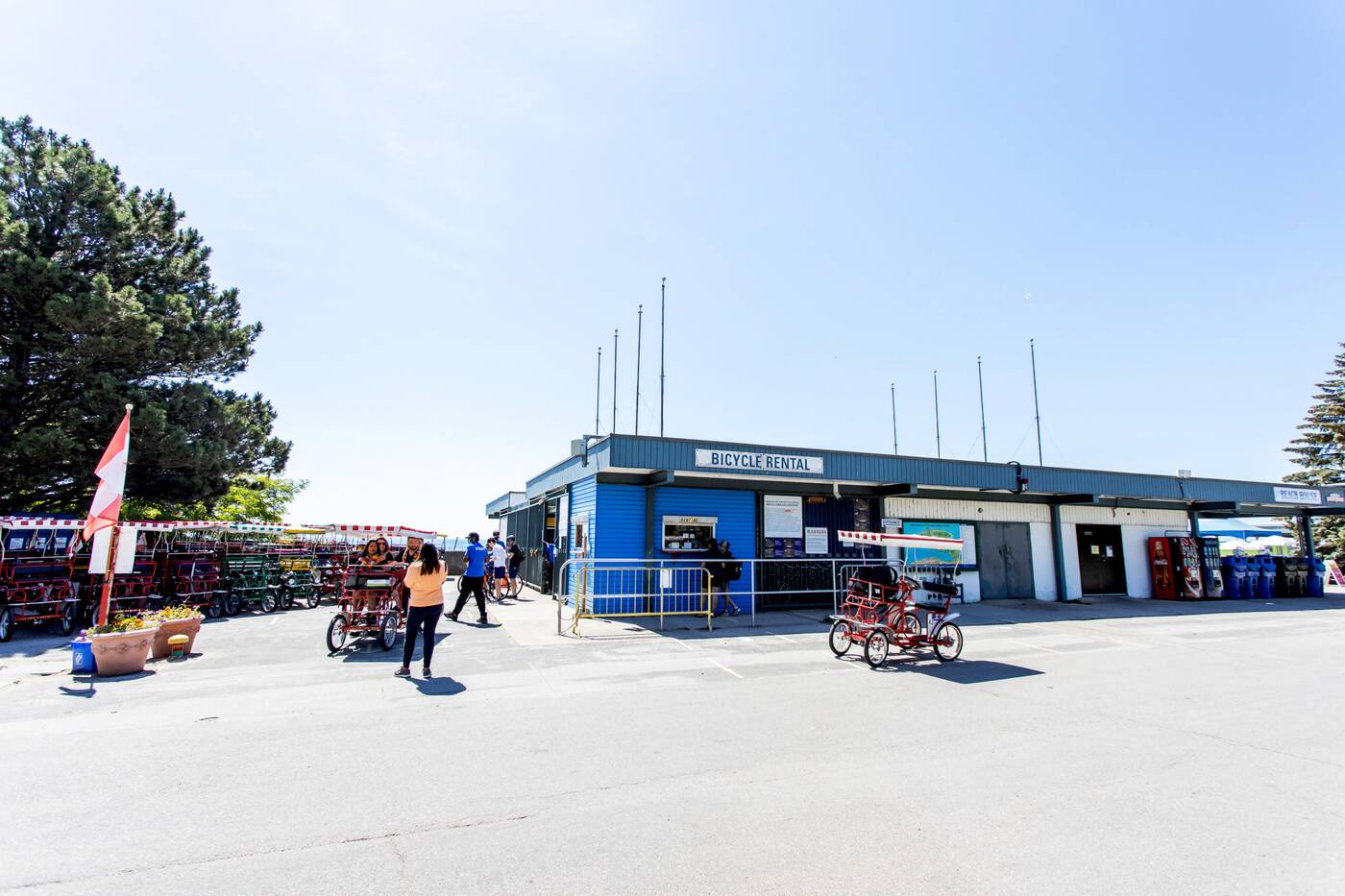 Regular and tandem bikes, as well as four-seaters, can be rented out by the hour or day on the island.

Next to the concessions, you'll find the island bike rental company where regular, tandem and four-seater bikes are all able to be rented out for the day or by the hour. 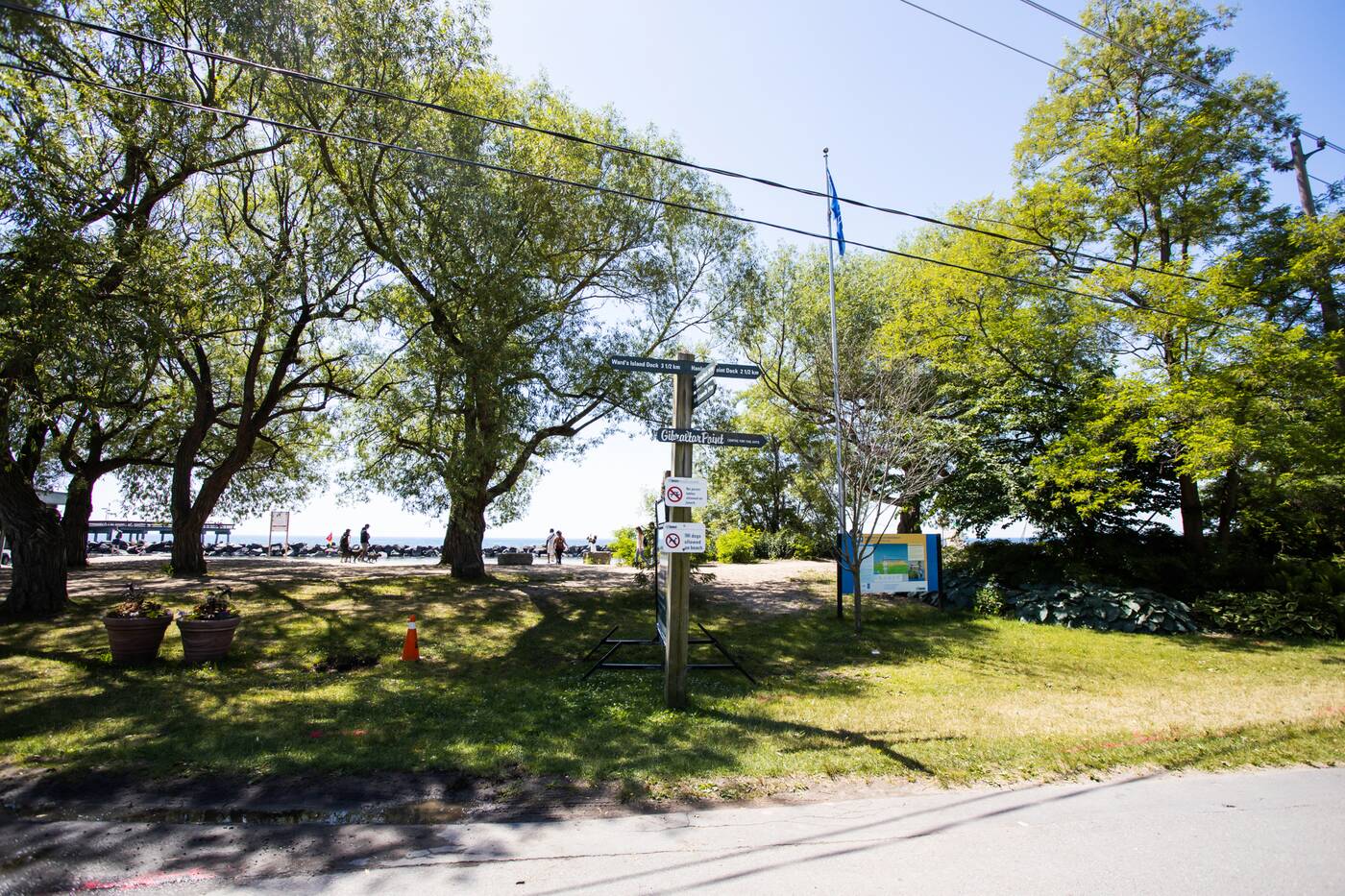 Heading west from Centre Island will get you to Hanlan's while Ward's Island is to the east.

One of these modes of transport will do you good if you plan on venturing past Centre Island Beach and doing a bit more exploring. There's more than enough to see and do to keep you busy for an entire day of fun.