This is how many businesses closed down in Toronto last year

With a staggering 119,890 jobs lost, Toronto just saw its largest single-year employment decline in recorded history — and that was before the current eight-week-long (and counting) shutdown of all non-essential businesses and services.

We have the city's 2020 Toronto Employment Survey to thank for this information, plus a whole bunch of other unsettling economic facts.

Set to go before the Planning and Housing Committee at City Hall on Thursday, the 38th annual employment survey reveals that Toronto had 3,480 less business establishments by the end of 2020 than it did at the beginning of the year.

This represents a -4.5 per cent loss with 73,080 establishments tracked in total — 800 of them actually new to the city, suggesting that well over 4,000 businesses actually closed down for good over the course of 202o.

Small businesses (with one-four employees) were disproportionately impacted with reported employment declines of 82 per cent related to COVID-19. 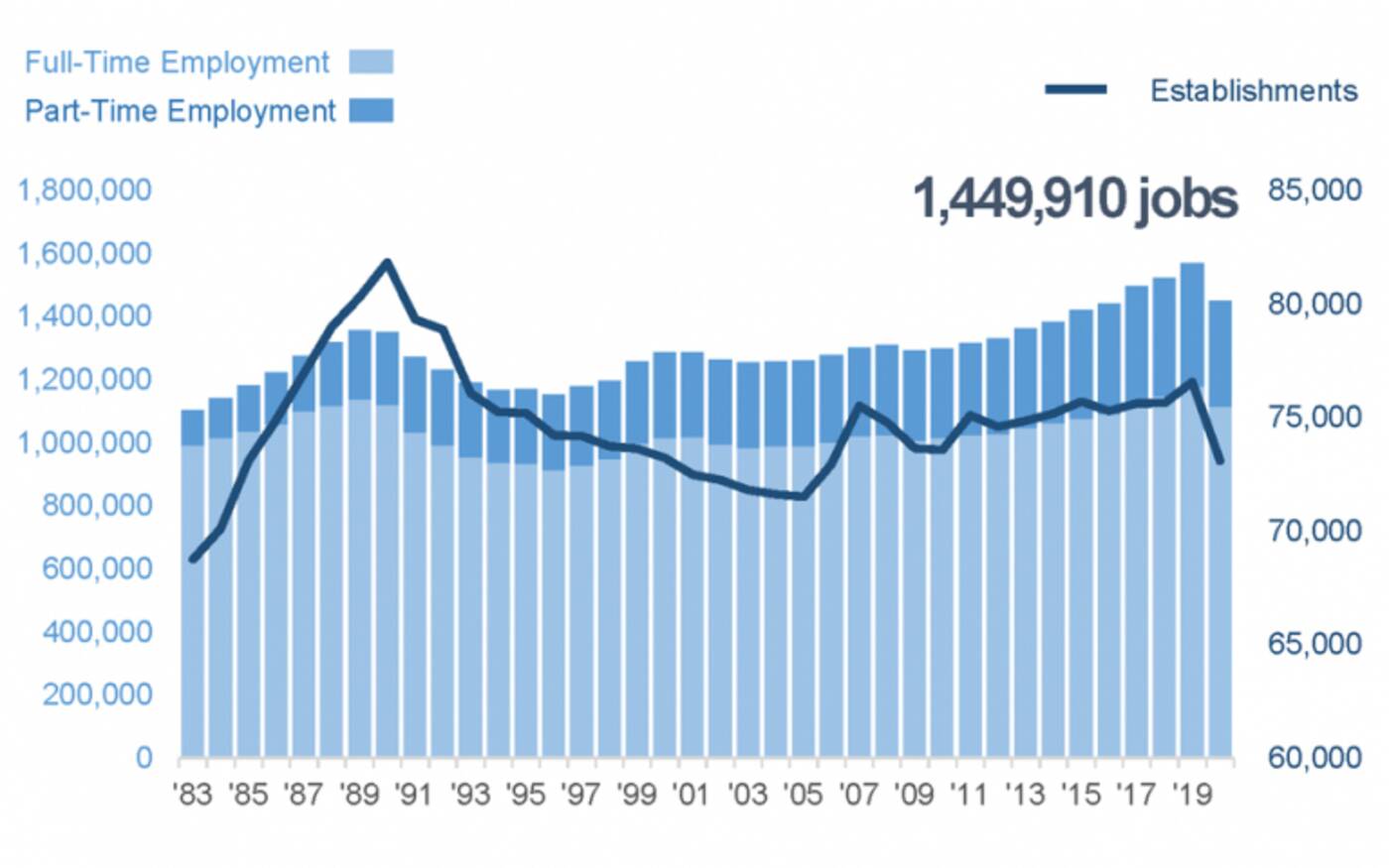 Job numbers have fluctuated over the years, but the drop between 2019 and 2020 represents the steepest loss since the city started tracking employment data in 1983. Image via City of Toronto.

The survey, which has been conducted every year since 1983, is meant to help monitor the City's economic health while influencing municipal government decisions and policies.

This year's results show that, perhaps unsurprisingly, service-based businesses such as restaurants, bars and hotels sustained the heaviest losses in 2020 due to the COVID-19 pandemic and resultant closure orders.

"Establishments in the Service sector reported being most negatively impacted by COVID-19 with net losses of more than 30,000 jobs across almost 2,000 businesses," reads the employment survey report. 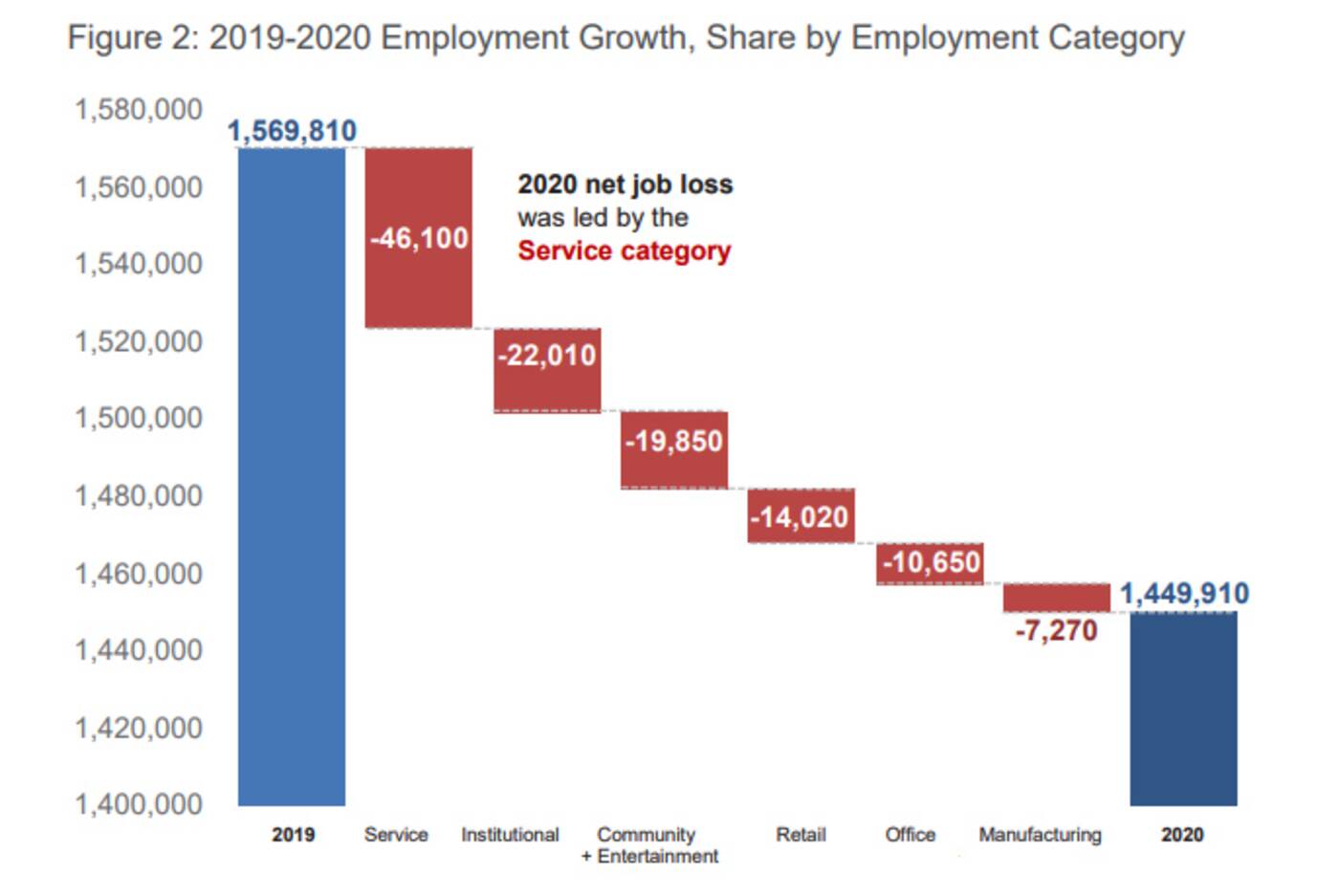 Service industry jobs and Institutional jobs led the pack in terms of jobs lost by number between 2019 and 2020. Office workers were the most-likely employees in Toronto to keep their jobs. Image via City of Toronto.

Employment in the "Community and Entertainment" sector declined by a whopping -35.3 per cent with 19,850 jobs lost, while the Toronto retail sector saw 14,020 employees depart for an overall total shrinkage of 9.1 per cent.

Though it wasn't all bad news for retailers.

"Despite the overall net losses in retail employment this year, certain retail activities experienced positive growth including department store retailing (2.5 per cent), bulk retail (3.6 per cent), and supermarkets (1.2 per cent)," reads the report. "These activities added a combined total of 670 jobs."

Office employees, who make up the largest faction of Toronto's workforce at 51.2 per cent as of 2020, were the least-impacted by pandemic closures: Only 10,650 office workers lost their jobs last year, representing 1.4 per cent of the city's 753,420 office employees. 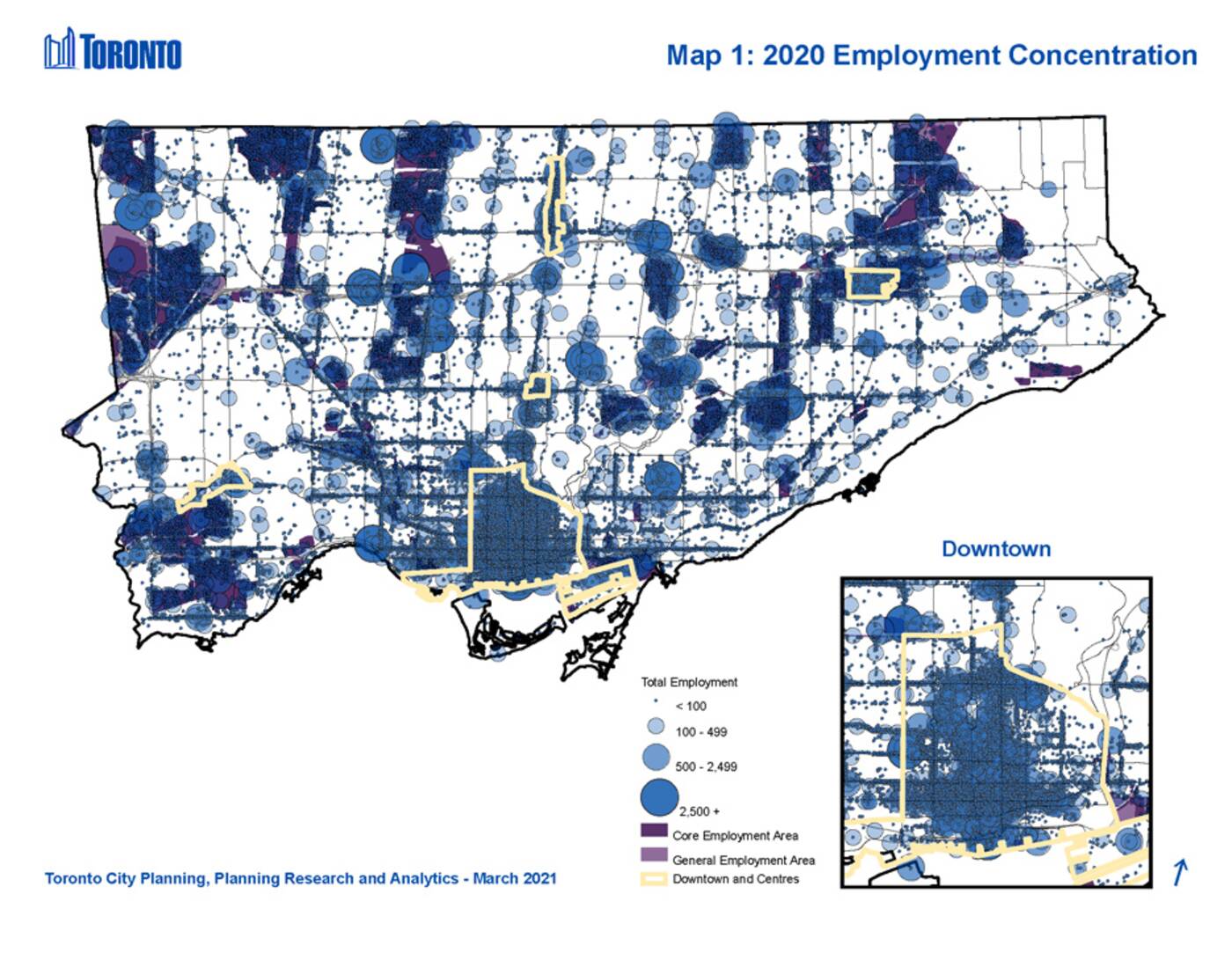 A total of 614,940 jobs were reported in downtown Toronto for 2020, making up 42.4 per cent of all employment city-wide. Image via City of Toronto.

According to city data, office employment comprises 70 per cent of all jobs in downtown Toronto, but many have been able to work remotely throughout the pandemic from home in the city, somewhere else in Ontario or literally anywhere in the world with a solid internet connection.

The downtown core thus saw some job losses as some employers pivoted to permanent stay-at-home work models or moved to larger, cheaper spaces elsewhere in the city.

"In 2020, Downtown employment decreased by 47,350 jobs or 8.1 per cent," reads the report. "Downtown experienced more change relative to the citywide average of -7.6 per cent."

In terms of the workforce itself, people with part-time jobs (a fast-increasing proportion of the pool) were hit the hardest with 55,030 positions lost, representing a decrease from 2019 of 14.1 per cent.

More people in full-time positions actually lost their jobs last year (64,850) than part-timers, but because these jobs already represent a larger chunk of the workforce, this translated to a decline of just 5.5 per cent.