In the 1870s, along with the rest of the world, Canada suffered an economic slump. In that decade Toronto had only 80,000 inhabitants, but among them were those who, despite the harsh economic times, managed to prosper quite well.

One of them was Edward Leadlay, an English immigrant who was instrumental in establishing Standard Woollen Mills at 227 Front Street. He also owned a business that processed the by-products of sheep (tallow, lanolin, hides and wool). He had retail outlets on Queen, Crawford and Front Streets.

In 1876, he built a residence for his family at 25 Esther Street, which is now named Augusta Avenue. The home was a short distance north of Queen Street West, three streets west of Spadina Avenue. 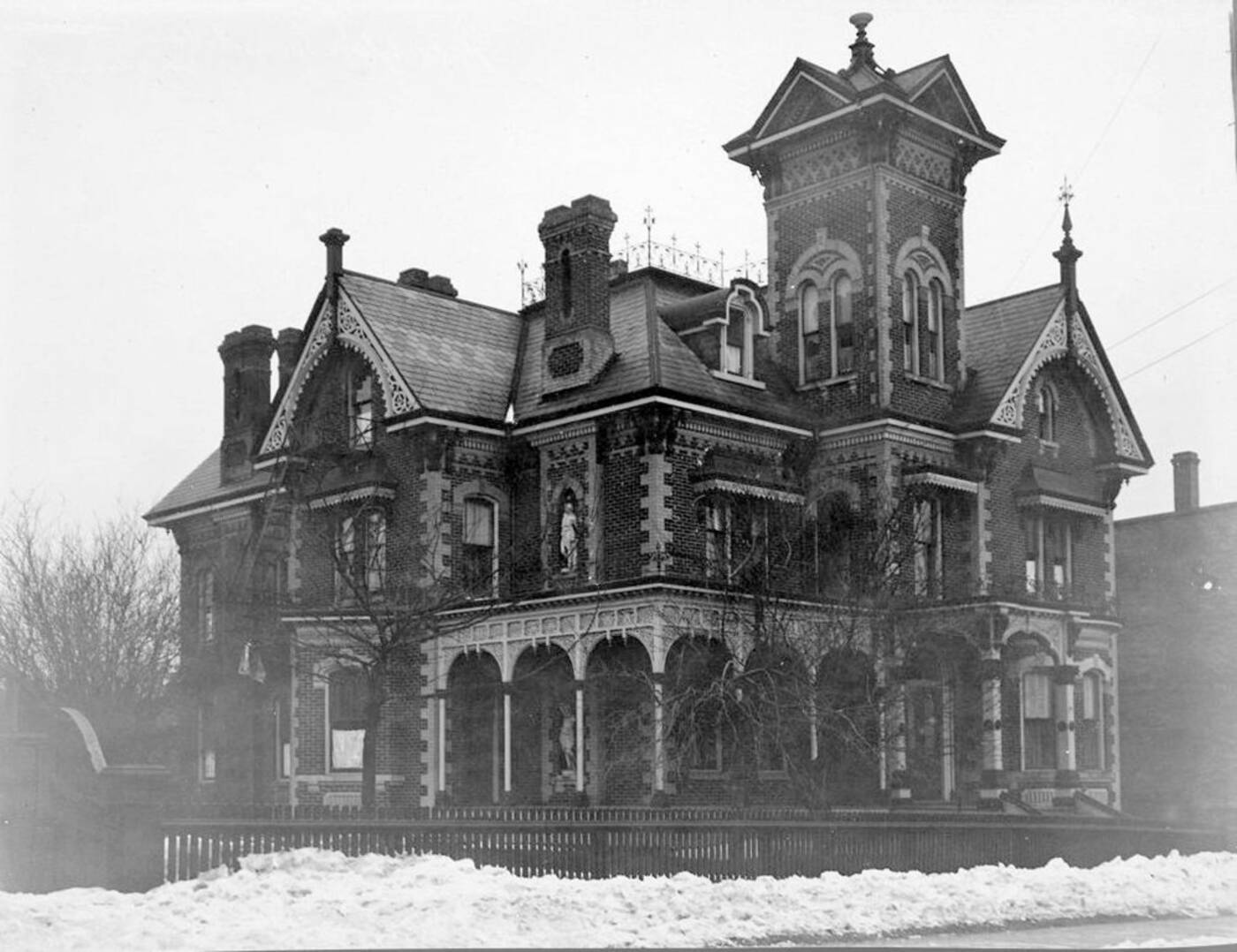 The Leadlay home in 1909, when it was a men's home operated by the Salvation Army. Toronto Archives.

When the house was completed, it was the finest and largest residence in the entire area. The 1890 Goad's Atlas (insurance maps) reveals that it occupied several lots, and had considerable space surrounding it. A carriage house and shed were at the rear of the property, on the east side.

The home remains impressive today, but people passing it on the street might wonder why such a mansion was erected in a community where incomes were more modest than Leadlay's.

However, the site was convenient for him, since his business enterprises were within walking distance or a short carriage ride from his home.

The three-storey Leadlay house is a flamboyant example of high-Victorian architecture, possessing an eclectic mixture of Gothic, Romanesque and Italianate styles. The tower that rises above the third storey faces west and remains as grand today as when it was built.

The roof of the house boasts slate tiles, and the windows facing west on the second storey have large canopies above them. The wood trim on the structure (especially on the veranda) involves intricate carpentry work accomplished with a coping saw.

The rounded arches on the veranda are supported by narrow columns, the pillars of the portico having capitals that somewhat resemble those of the Corinthian-style. 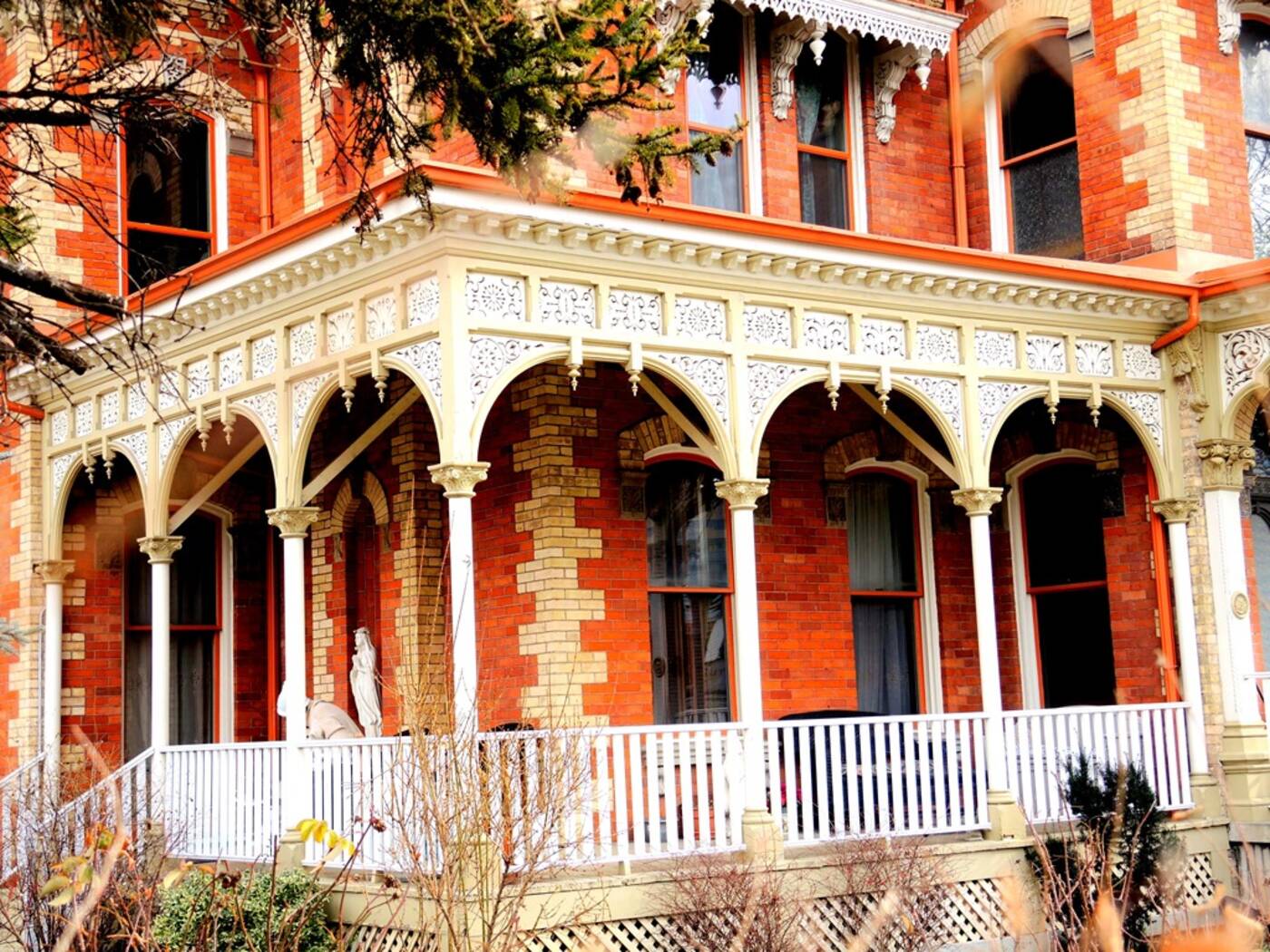 The large veranda on the northwest side of the house. Visible are the intricate woodwork above the arches that support the veranda roof, and the yellow-brick quoins on the corner of the house.

Facing Augusta Avenue, on the south side of the first-floor, there is a large bay window, where either the parlour or dining room was located. The bay window allowed extra light to enter the interior space, essential in an era without electricity.

The large overhanging eaves are supported by fancy modillions (brackets). Though constructed mainly of red bricks, yellow bricks are employed in the quoins at the corners of the house and in the patterns in the brickwork at the top of the tower.

Today, it would be almost impossible to construct a house with such intricate detailing due to the high cost of labour.

Leadlay died in his mansion on September 17, 1899. The house was sold to the Salvation Army in 1906, the church organization employing it as a men's home.

The residence was purchased from the Salvation Army in 1937 by the Felician Sisters, a Polish order. The house became a convent for about 25 nuns that were engaged in charity work in the community. 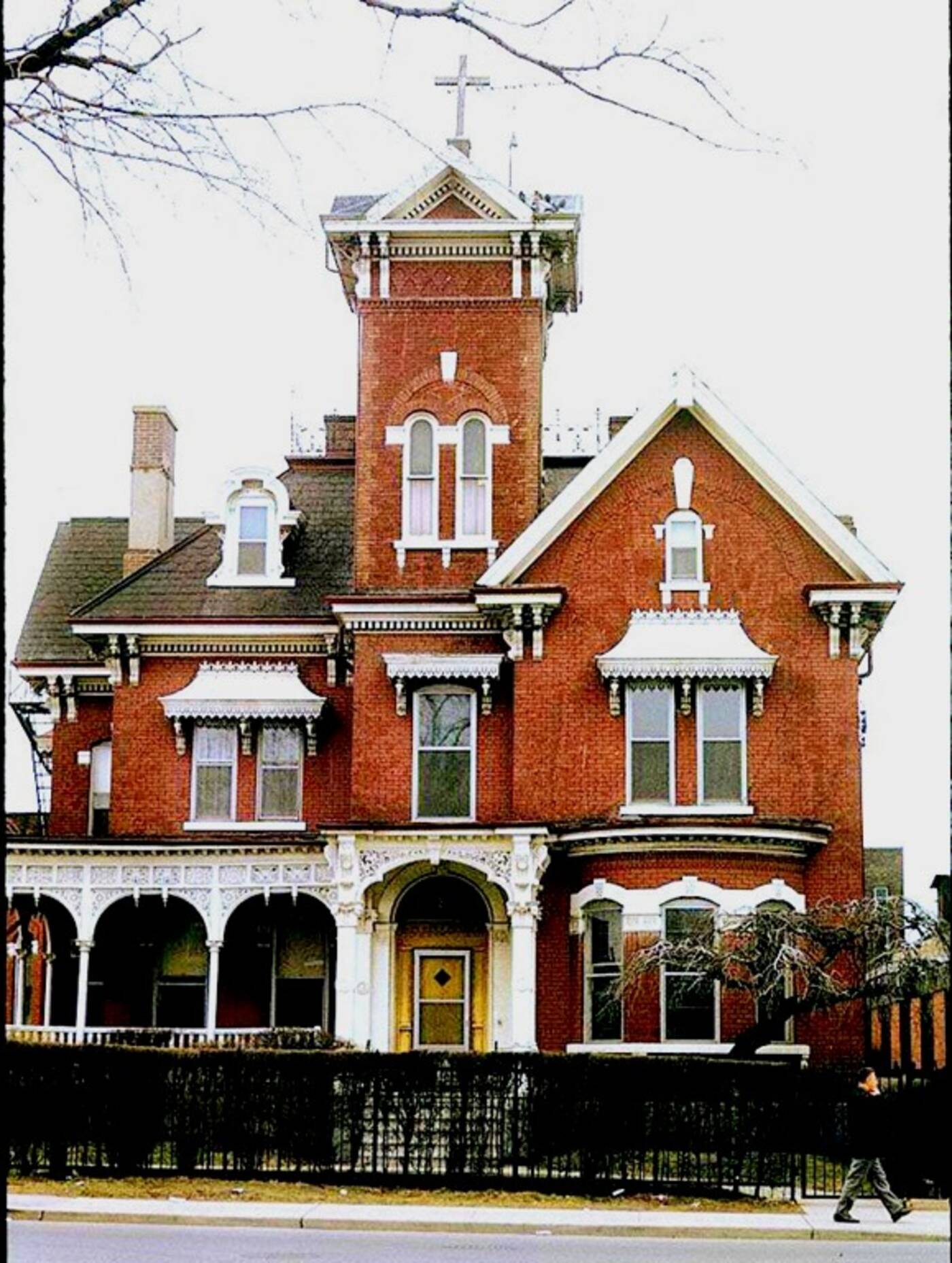 The residence at 25 Augusta Avenue in 1973, when it was the convent of the Felician Sisters.

The nuns departed, and in 1993, it became the St. Felix Centre, which continued serving the community. It became a registered charity in 2003.

Since 2011, it has been a transitional home for women.

Doug Taylor was a teacher, historian, author and artist who wrote extensively about Toronto history on tayloronhistory.com. This article first appeared on his site on October 11, 2017 and has been republished here with the permission of his estate. The article has been modified slightly.