Ah, the pre-COVID days, back when the people of Ontario's feelings about Premier Doug Ford had everything to do with budget cuts and license plates, and could be reduced to calling him a timbit and a waste yute.

After the premier became the face of the province's regular pandemic updates, his approval rating went up, with many realizing over the course of the health crisis that that they actually kind of like the guy's calm, strong presence and his new tendency to back down and take advice from experts around him when he doesn't know best.

His press conferences have struck a balance of properly informing citizens about the severity of COVID-19 and the direction we're headed, while also being hopeful and even having an edge of unintended levity.

Like the much-watched appearances by Prime Minister Justin Trudeau, Ford's briefings have been somewhat of a comfort to some, keeping residents in the know and making us feel a little closer to the political leaders making the big decisions.

But still, Ford's handling of the pandemic certainly hasn't been without criticism, with a large swath of the population consistently calling for further lockdowns, and another chunk demanding the complete opposite.

With things being so divisive and lockdown wearing on, his fanfare appears to be waning as we weather the virus's second wave. 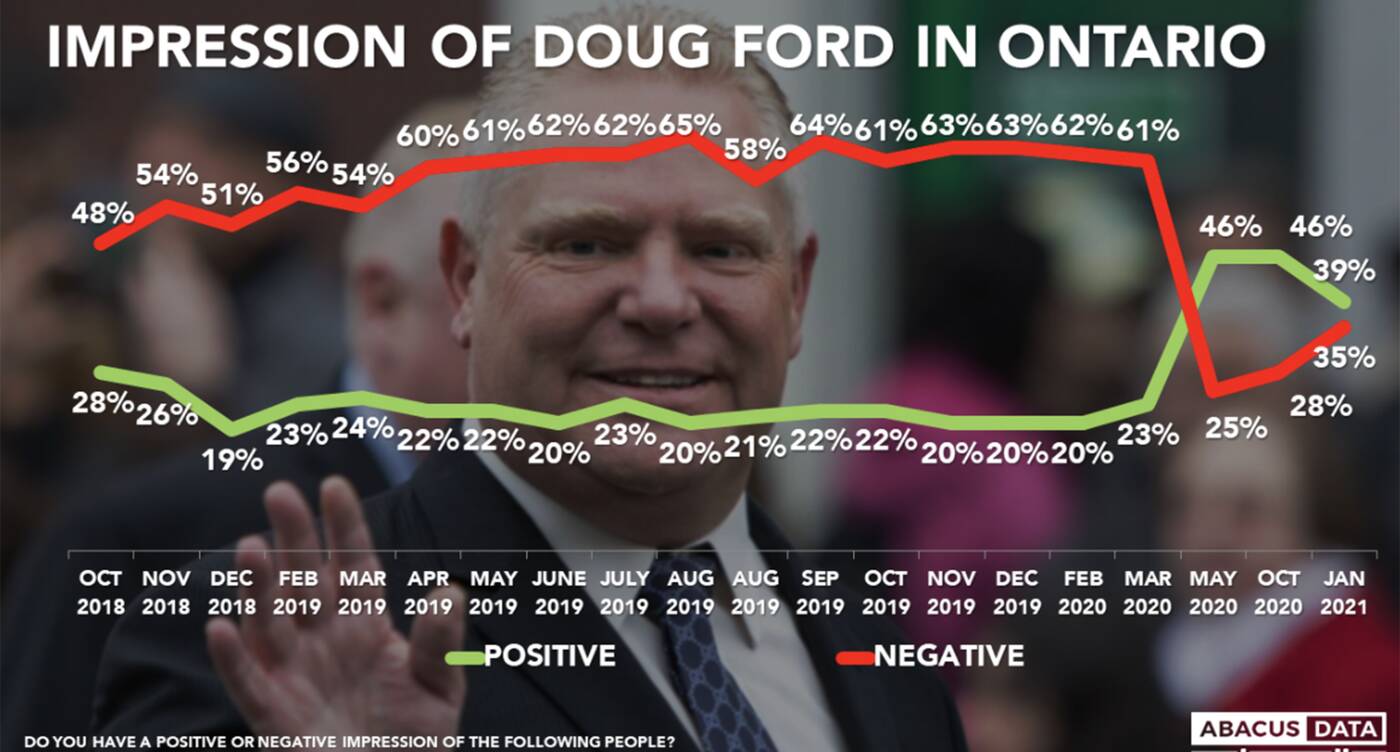 A new survey conducted by Abacus Data has revealed that while the percentage of those who held a positive impression of Doug Ford spiked sharply between March and October 2020, it has fallen ever since, going from a high of 46 per cent to 39 per cent as of January 2021.

Negative impressions of him, on the other hand — which were generally pretty high until COVID hit, held by around 62 per cent people — dropped substantially from 61 per cent to 25 per cent at the onset of the health crisis.

From Spring 2020 to January 2021, the number of people who think of him negatively has increased from 25 per cent to 35 per cent.

This equates to a fall from a net popularity of as high as +30 in the early days of the pandemic to one of just +4 today, the data says, adding that "while still well below the average 50 to 60% disapproval rating we tracked throughout 2019, the trendline suggests things are not moving in the Premier’s favour."

But, Ford's approval rating is still higher than other provincial leaders, such as Ontario Liberal Leader Steven Del Duca, who 38 per cent of respondents said they "did not know enough about" to make a decision on how they felt. 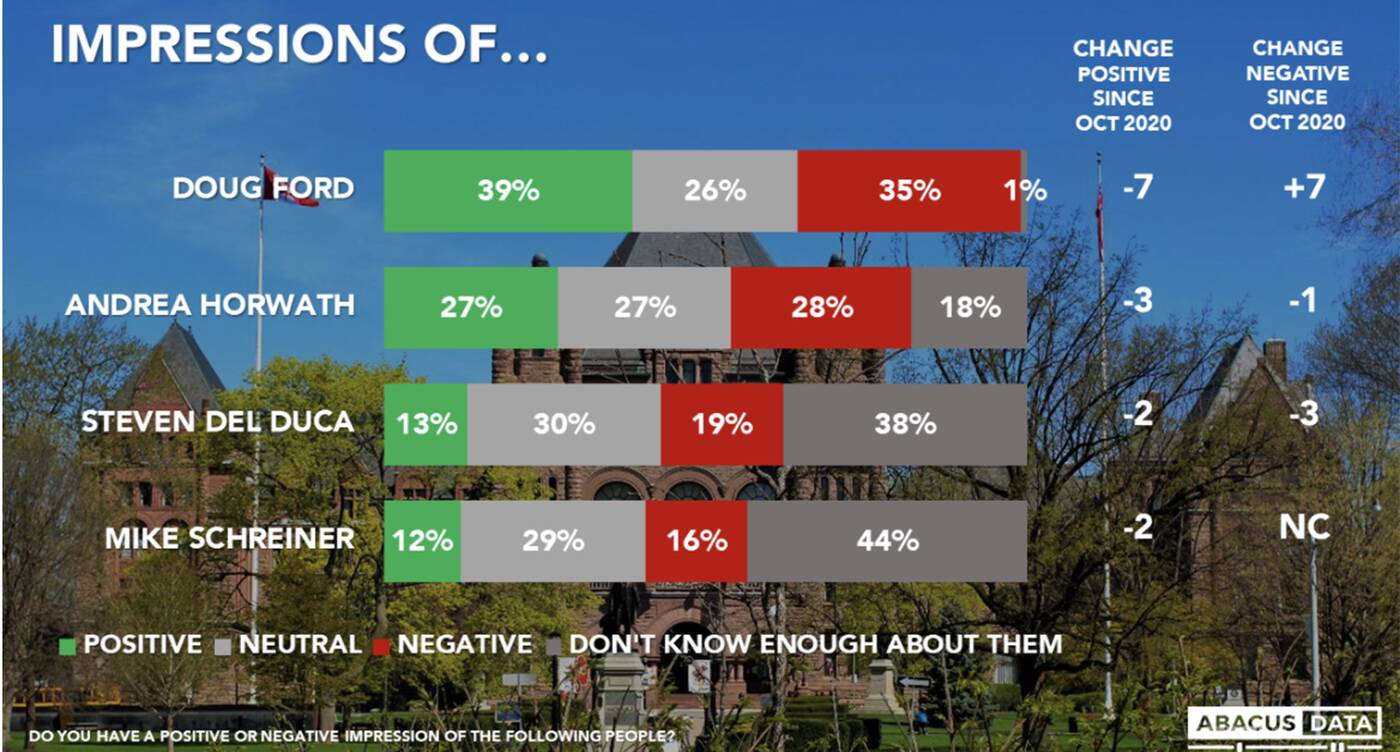 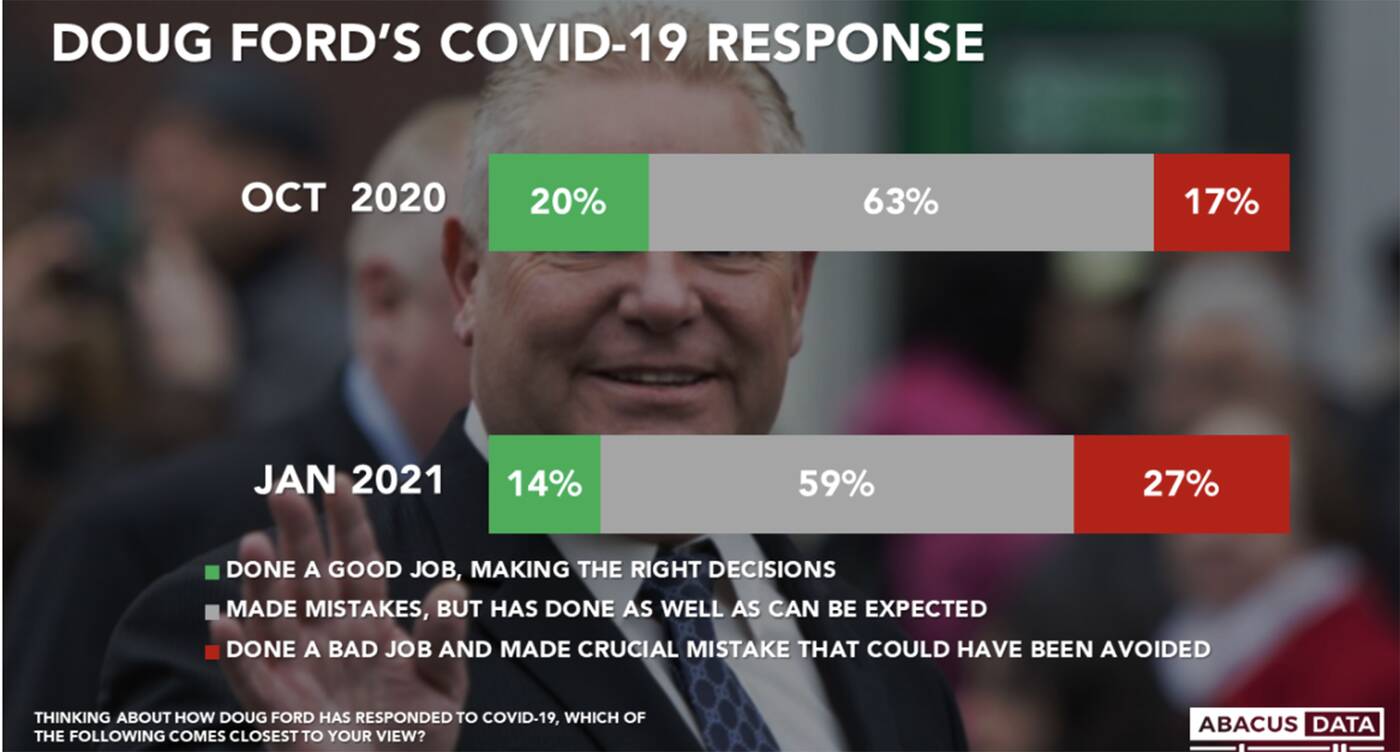 The biggest issues constitutents have with the province's pandemic management are, based on the results, that Ford's team does not have a clear plan to deal with COVID-19, has not appeared to be in control of the situation, has not best protected seniors in long-term care and has done a poor job reducing the number of infections.

Most felt that the government has made public health the priority and, by a slim margin, has generally made the right decisions.

Respondents were completely divided on the issues of whether the province has provided safe and good quality schooling for children, nas provided constitutent advice and guidance and has been fair to all regions. 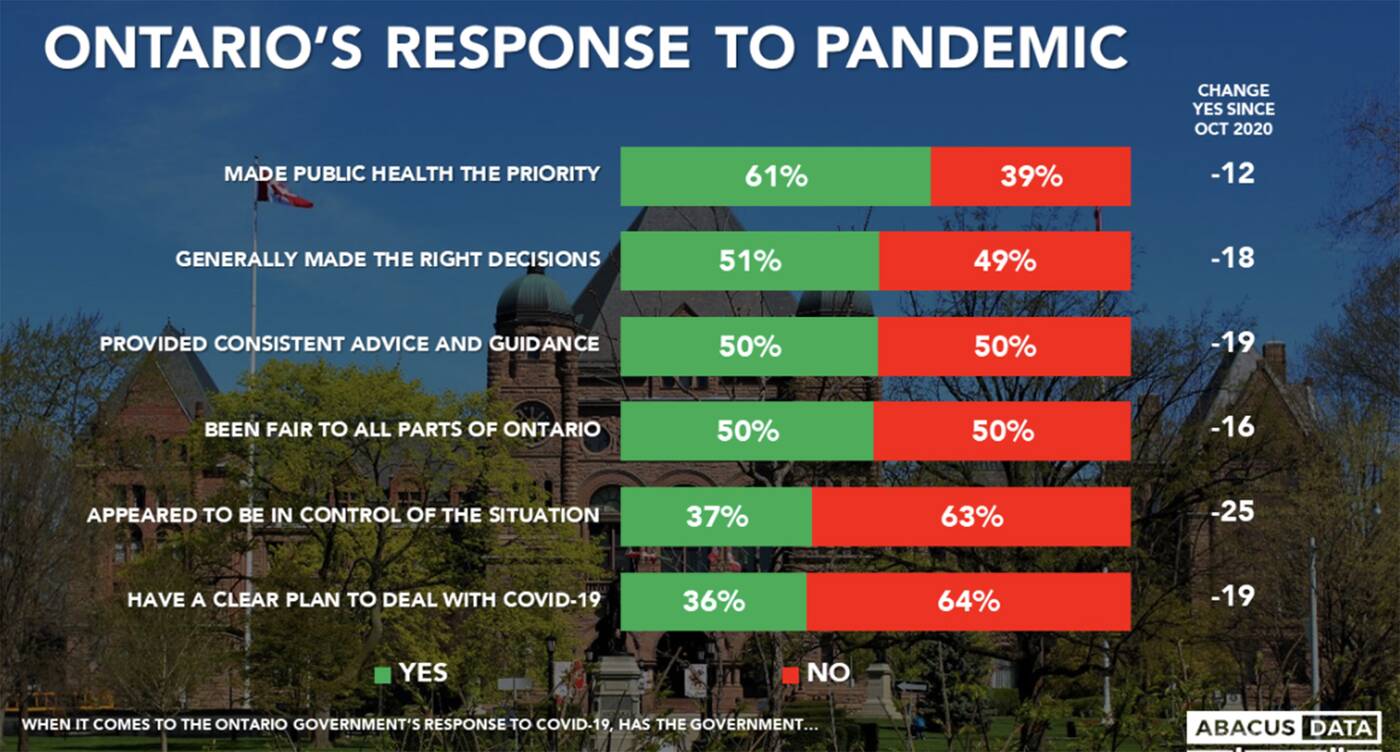 As the vaccine slowly rolls out across the province and residents enter, if they're in Toronto or Peel, their eighth week of total lockdown, we'll have to see how people's feelings about Ford and his government change.

It's undoubtedly been a near-unbearable many months for us all, our political leaders included, and obviously the premier can't please everybody (or, perhaps, anybody).