Before the creation of the Toronto Fire Services, the city relied upon volunteer fire brigades to put out fires, though they were known for often being woefully unprepared and unequipped to do so. Sometimes the various volunteer brigades would even get into fights over which company would put out a particular fire. 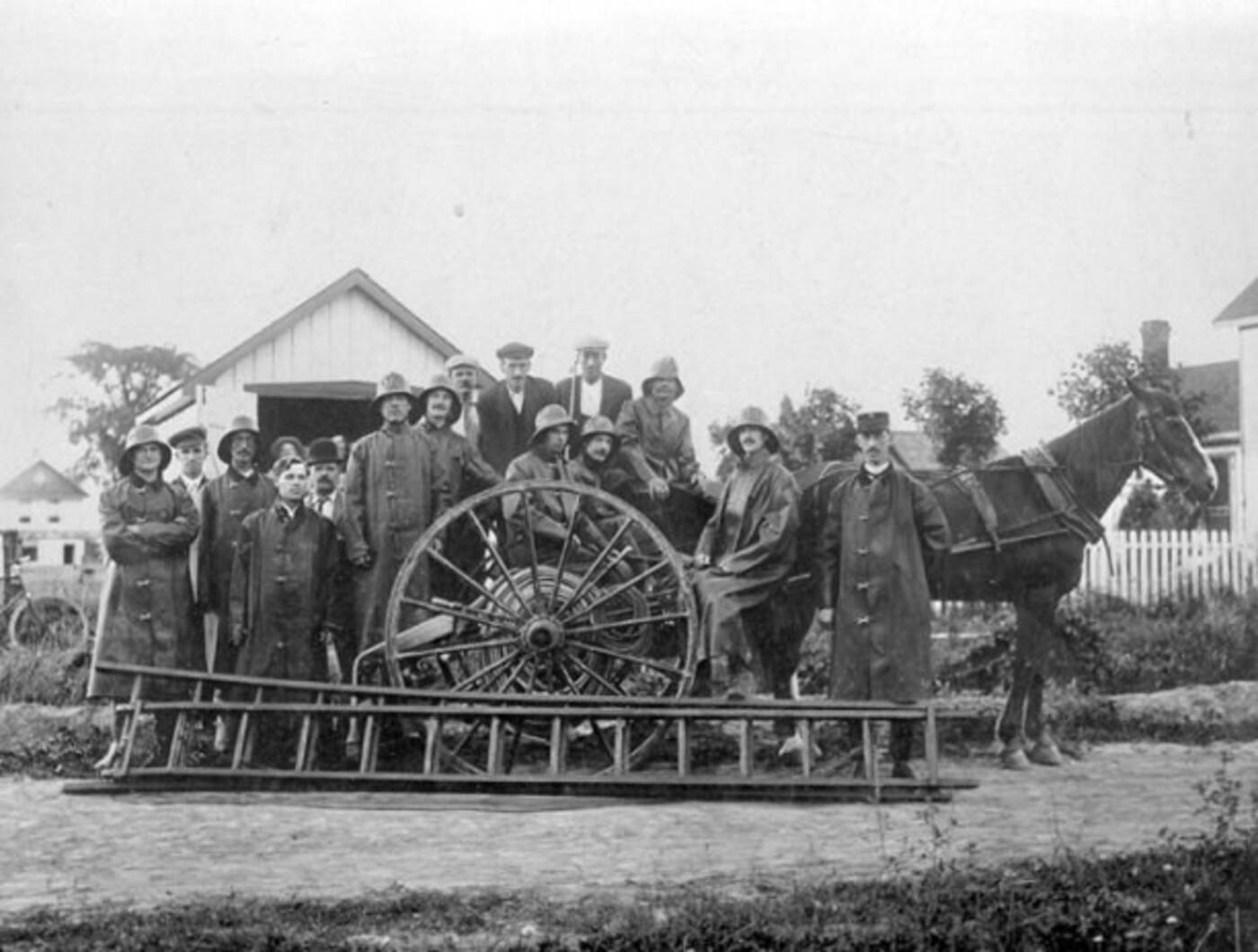 The volunteer fire brigades' disorganization and poor equipment provisions were highlighted in what was then known as the Great Cathedral Fire, which struck the city in 1849. 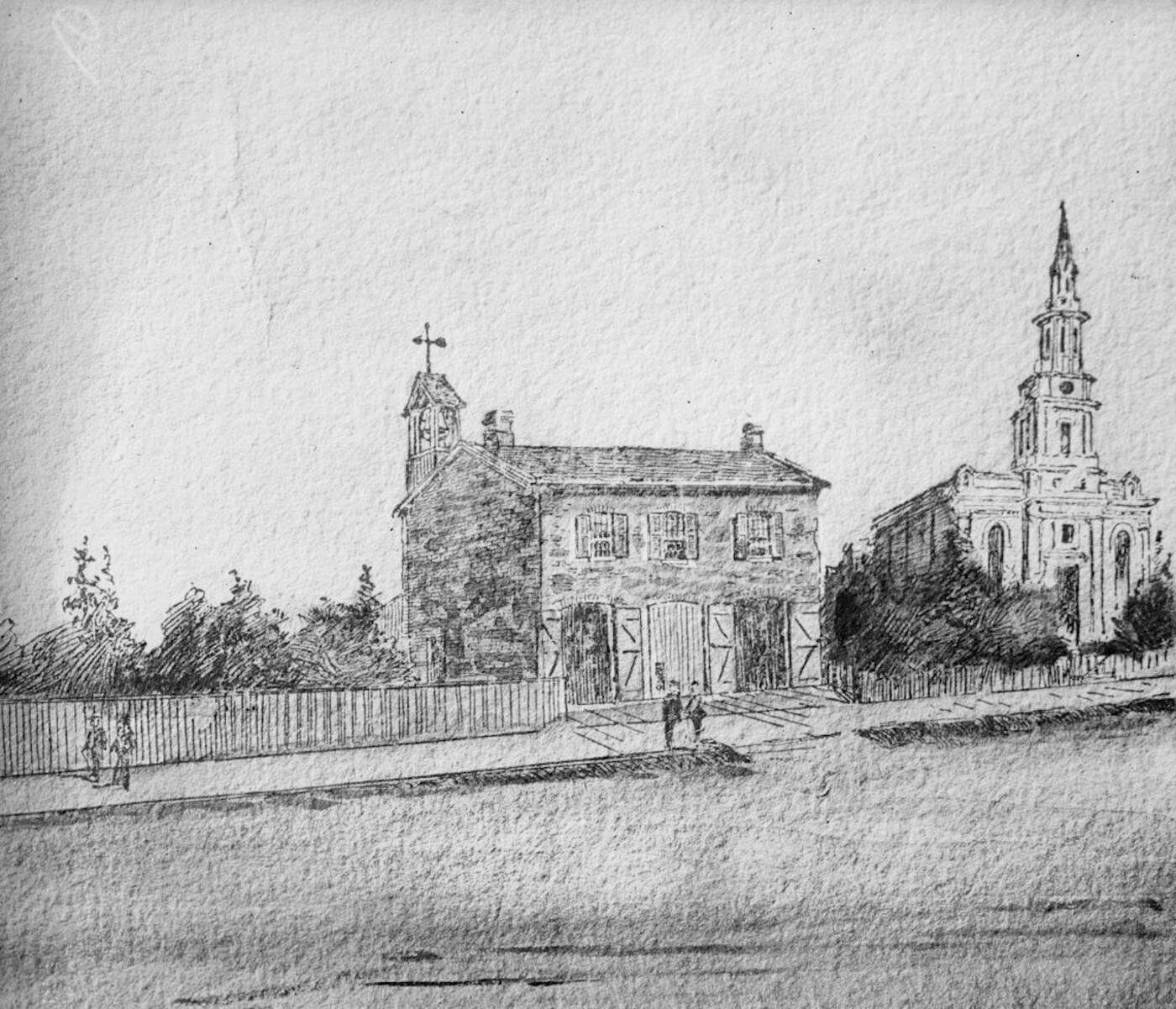 An anonymous drawing of one of Toronto's first fire stations in 1831. Courtesy City of Toronto Archives.

The fire started at 1 a.m. on April 7, 1849, at Graham’s Tavern. The fire soon consumed the nearby Post’s Tavern and swept across King Street, taking many of the early city's wooden frame buildings with it.

At 3 a.m., St. James Cathedral succumbed to the fire. Its spire toppling, the fire quickly destroyed the entirety of the structure.

The fire continued to spread to the south side of King Street, damaging the old Toronto City Hall and market buildings, both of which had been constructed back in 1831. The damage was so significant that the market buildings had to be torn down, and the city hall itself was destroyed.

A rain shower at 3.30 a.m. stalled the fire’s progress. The volunteer fire brigades and the local militia were brought in to stop the blaze, which finally ended in the early morning of April 8th.

At the time, the damage to the city’s downtown was estimated to be somewhere between $500,000 to $700,000, with almost $60,000 in damage to St. James alone. The only life lost was that of Richard Watson, who ran a number of the city’s newspapers and had been in the midst of rescuing printing type when he was buried in a collapsed building.

Although the Toronto Fire Department was set up as a public institution in 1874, the city still suffered in another major fire just 55 years later. This time, the fire swept through the downtown core, starting in an elevator shaft of a factory located on Wellington Street. 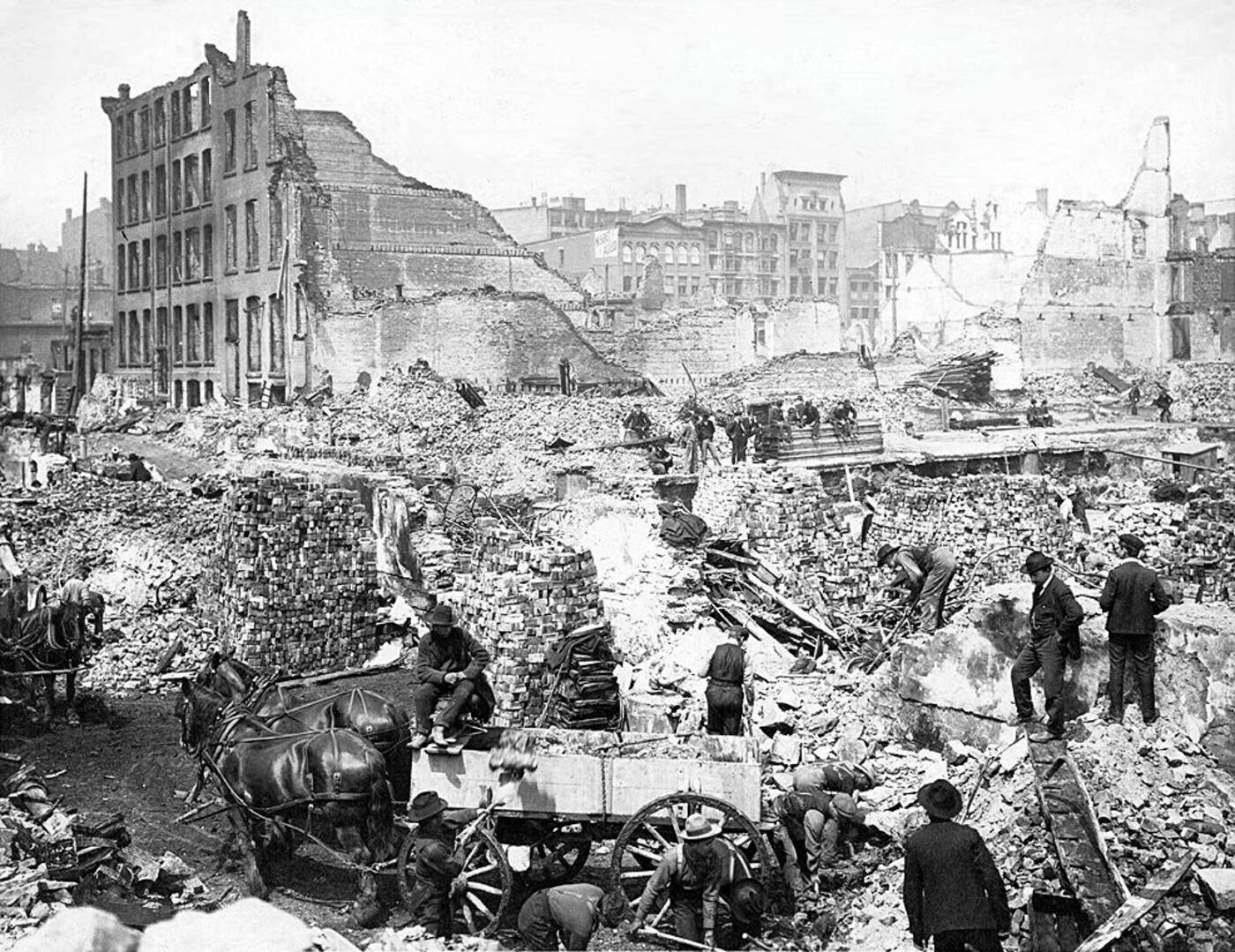 All seventeen fire stations in the city were alerted. The fire took nine hours to put out, and it was said that the fire could been seen as far away as Buffalo, New York.

In the nine hours that it raged the fire consumed over one hundred buildings, causing over ten million dollars in damage. 2.5% of the city’s population, roughly 5,000 out of the city's 200,000 inhabitants, lost their jobs overnight. 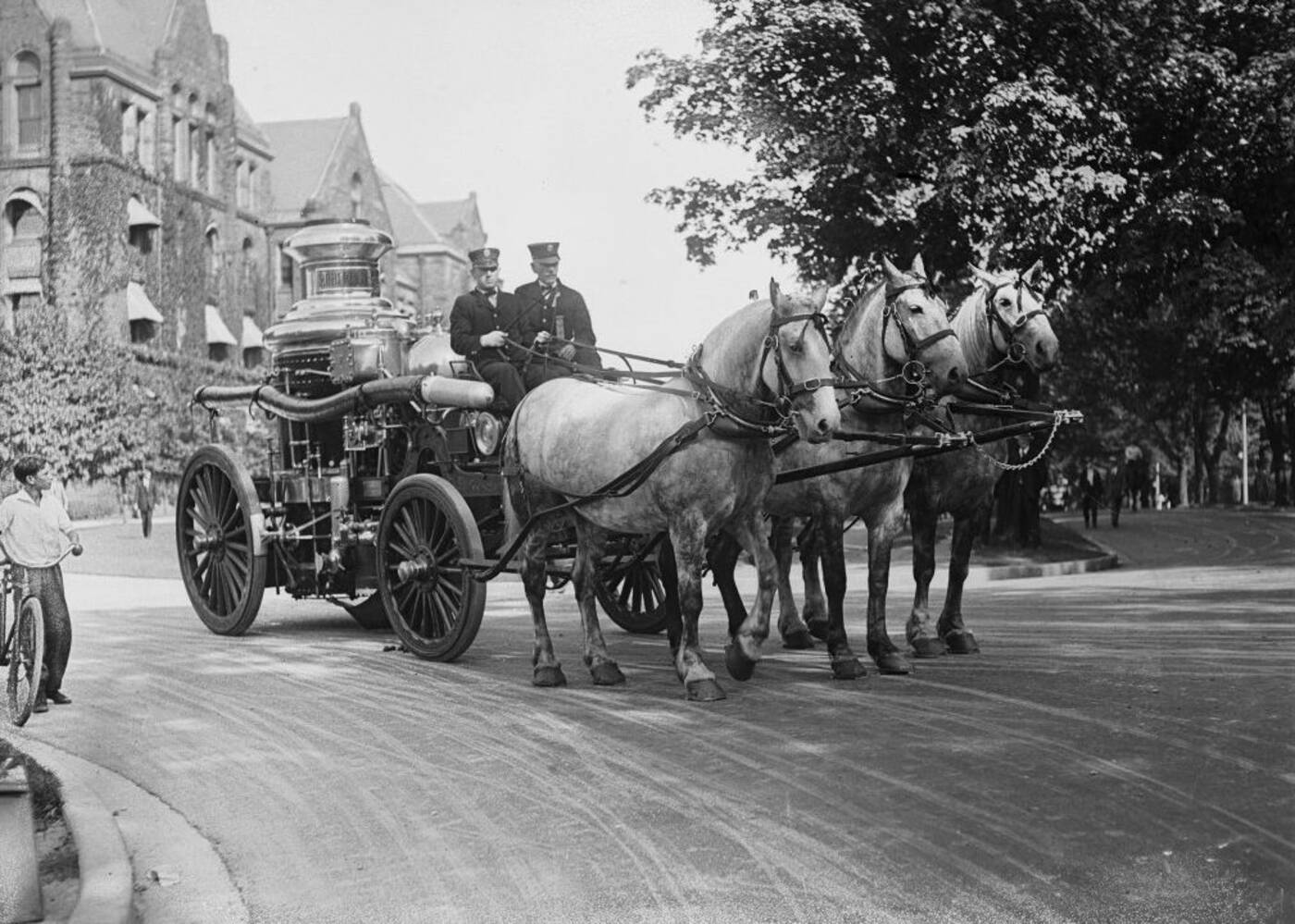 Fire engines in the late 19th century would have been pulled by horses. In fact, the Toronto Fire Department only began to use motorized vehicles after 1911. 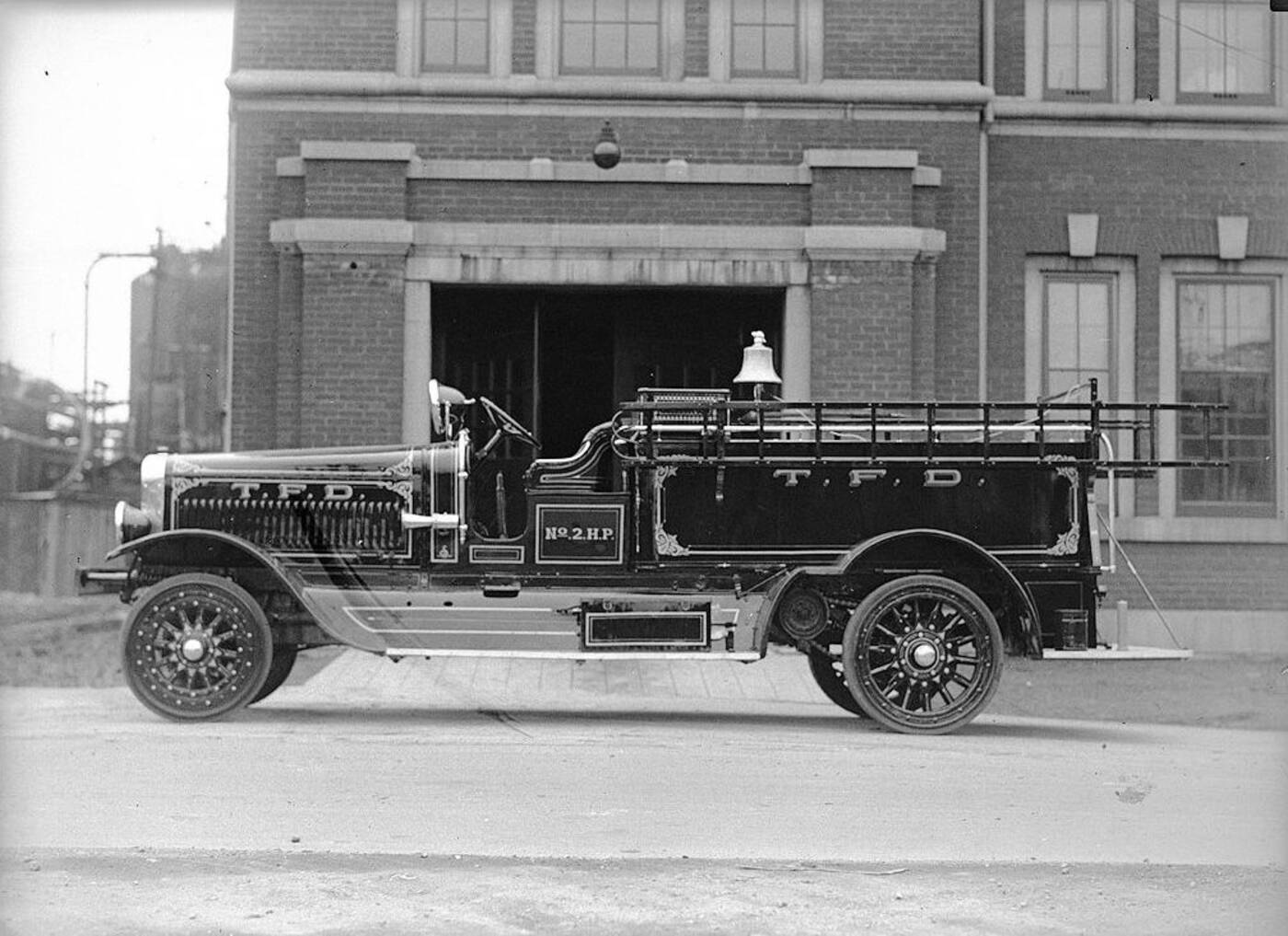 Toronto's fire engines, up until about the mid-1970s, were open-air vehicles, and the driver's cab was exposed. 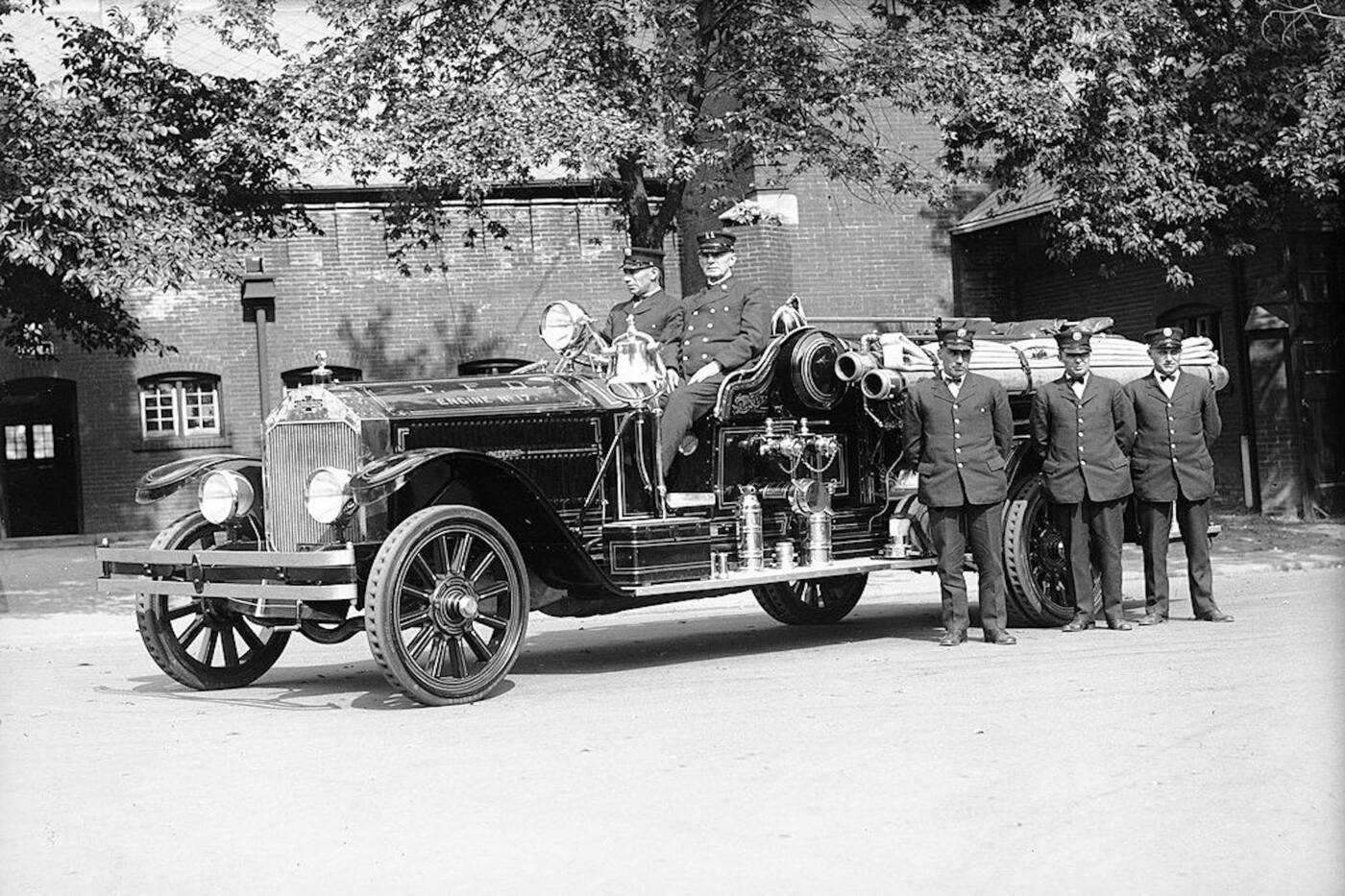 Pumper No. 17 on display at the CNE in the 1920s. Courtesy City of Toronto Archives.

Although the city used tiller-ladder engines, the construction of these vehicles (with the engine pulling a hook-and-ladder trailer) meant that they were cumbersome on Toronto's narrow streets. Toronto Fire Services now use much lighter trucks, which carry an aerial platform so firefighters can do their work. 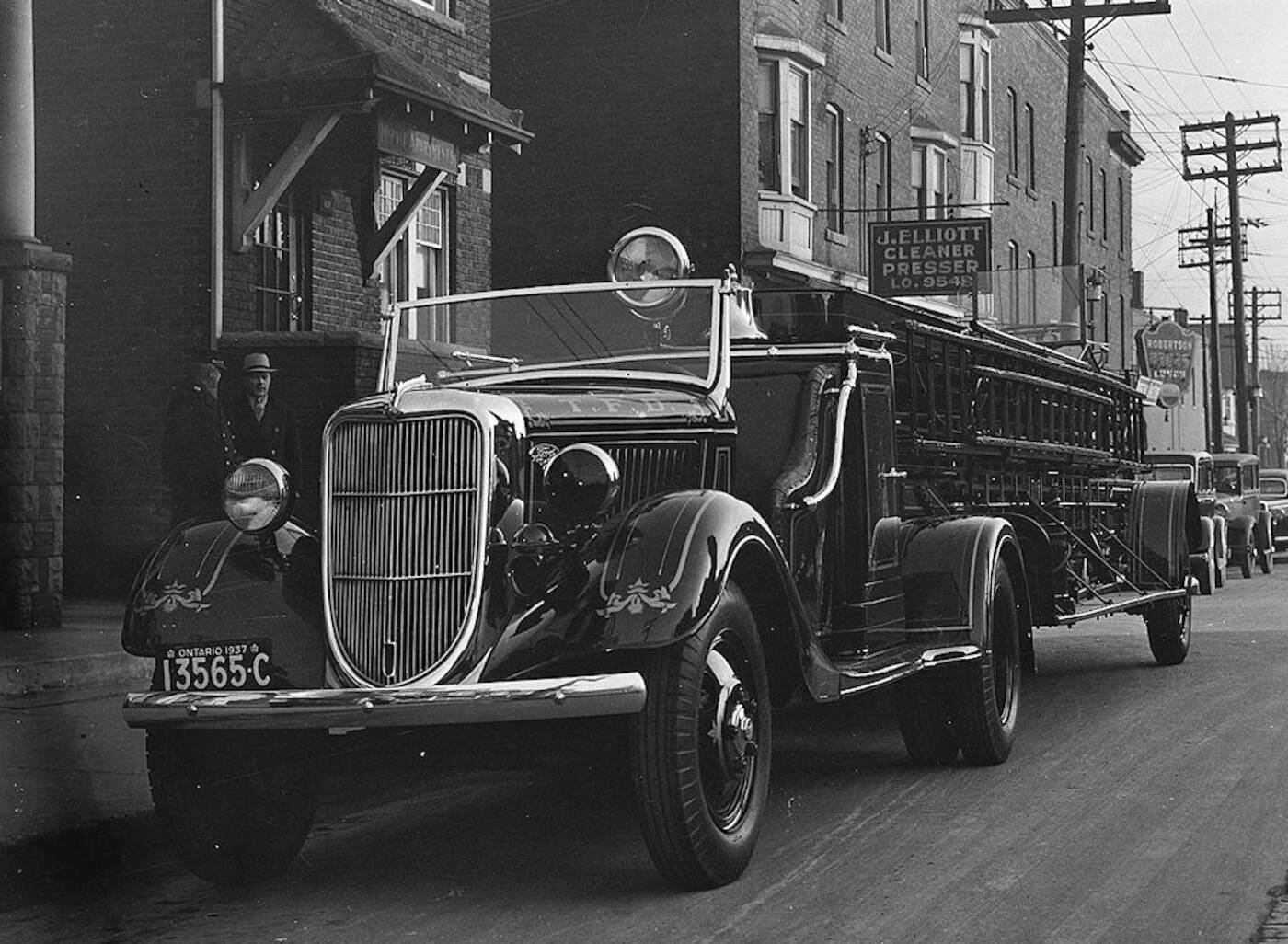 A city fire truck in the 1940s. Courtesy City of Toronto Archives.

Toronto Fire Services also has two fireboats as part of their fleet.

Fireboats have a long history on Lake Ontario. The first fireboat in Toronto, the Nellie Bly, was a private tugboat that was in service from 1906 to 1909 and helped put out fires on the Toronto Islands.

A number of private vessels served as part-time fireboats, including the T.J. Clark. Toronto Fire Services acquired its first full-time fireboat in 1923, the Charles A. Reed. It was docked at Centre Island and was in service until the mid-1960s. 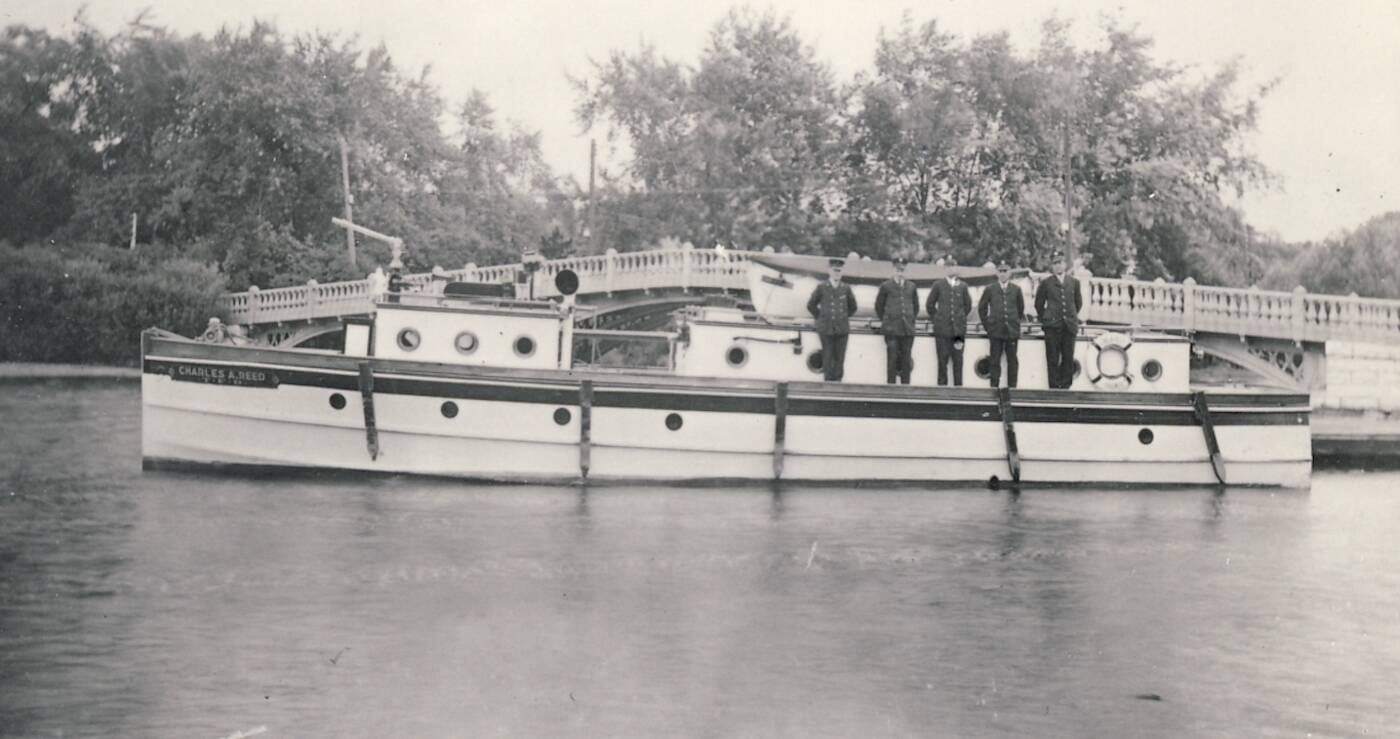 The fireboat William Lyon Mackenzie, named after Toronto's first mayor, was put into service in 1963. A custom-built fireboat complete with an ice breaker, it is expected to continue to be in operation until 2037. The Sora, a smaller, back-up boat was part of the fleet from 2005 to 2015.

In 2015, the Toronto Fire Services brought on another vessel, the William Thornton (named after the first firefighter who perished in the line of duty in Toronto). The Thorton is currently used as a back-up boat for the Mackenzie. 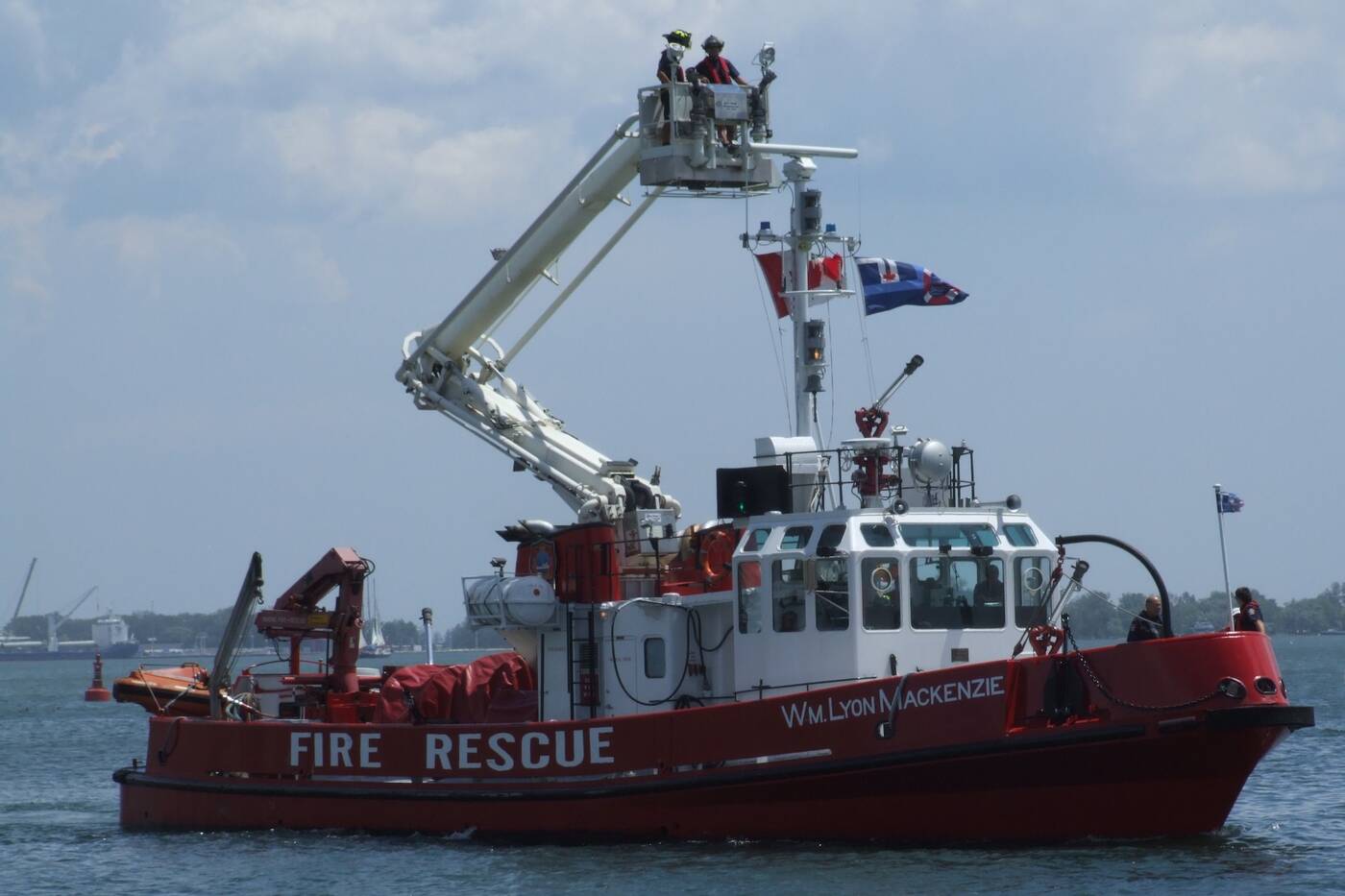 Fire stations: the architecture of infrastructure

A number of fire stations were built during the city's early days and showcase some beautiful architectural elements.

The oldest fire station in the city is Station 315, located near Kensington Market. It was built in 1875 and boasts an elaborate clock tower, which was rebuilt in the 1970s after an arsonist destroyed the station. 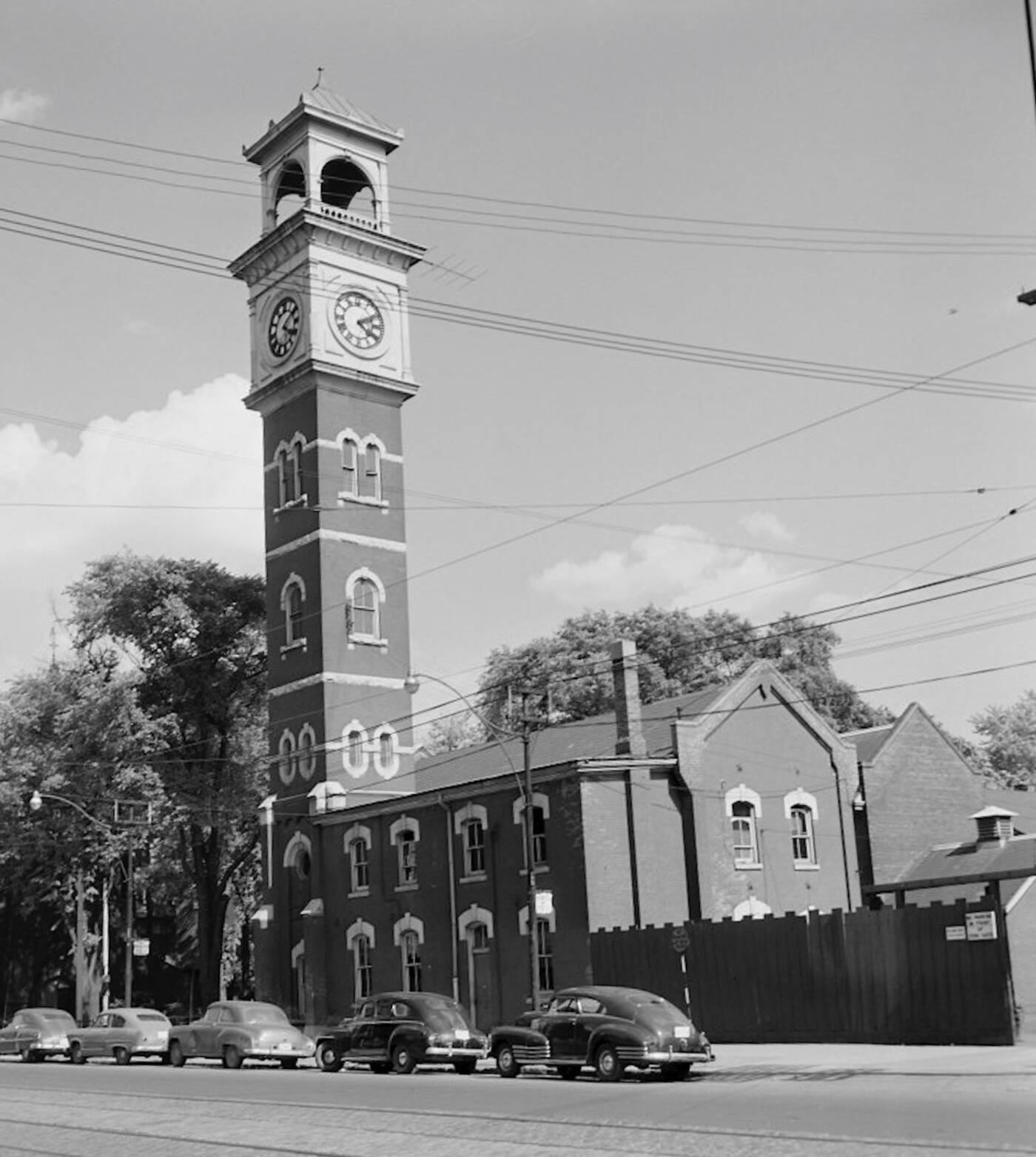 An image of Fire Station #315. This photo, taken in the 1950s, showcases the station's original clock tower. Courtesy City of Toronto Archives.

Similar to this station is #312, located in Yorkville and built in 1878. It is another of the city’s oldest operating fire stations and it still bears the Yorkville coat of arms. 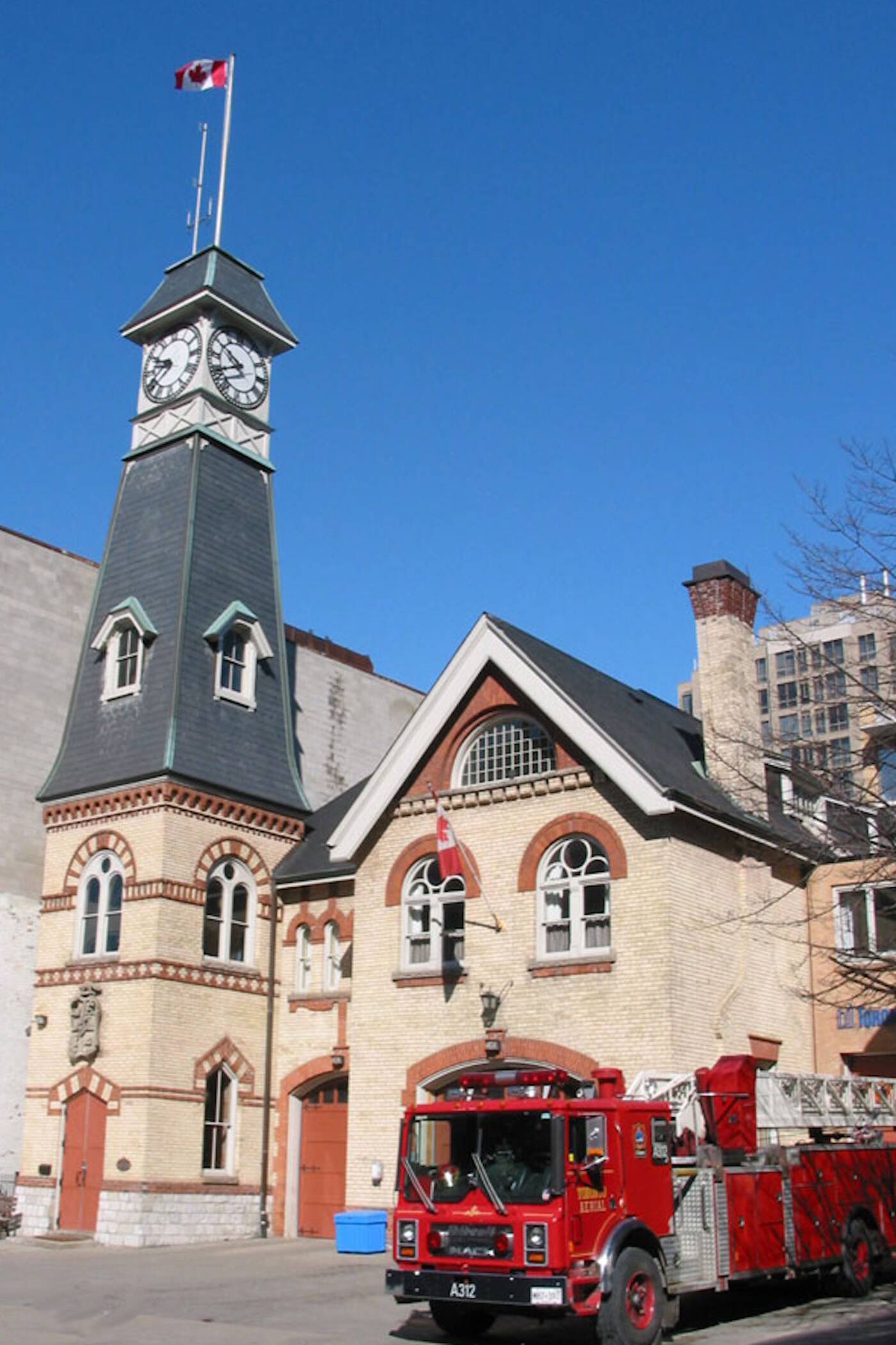 Fire station #312 in Yorkville. Courtesy Bob Krawcyzk and the Architectural Conservancy of Ontario.

Station #311, the Balmoral Avenue Fire Hall, built in Deer Park in 1911, was designated a National Historic Site in 1990 as a particularly good example of Queen Anne Revival architecture. 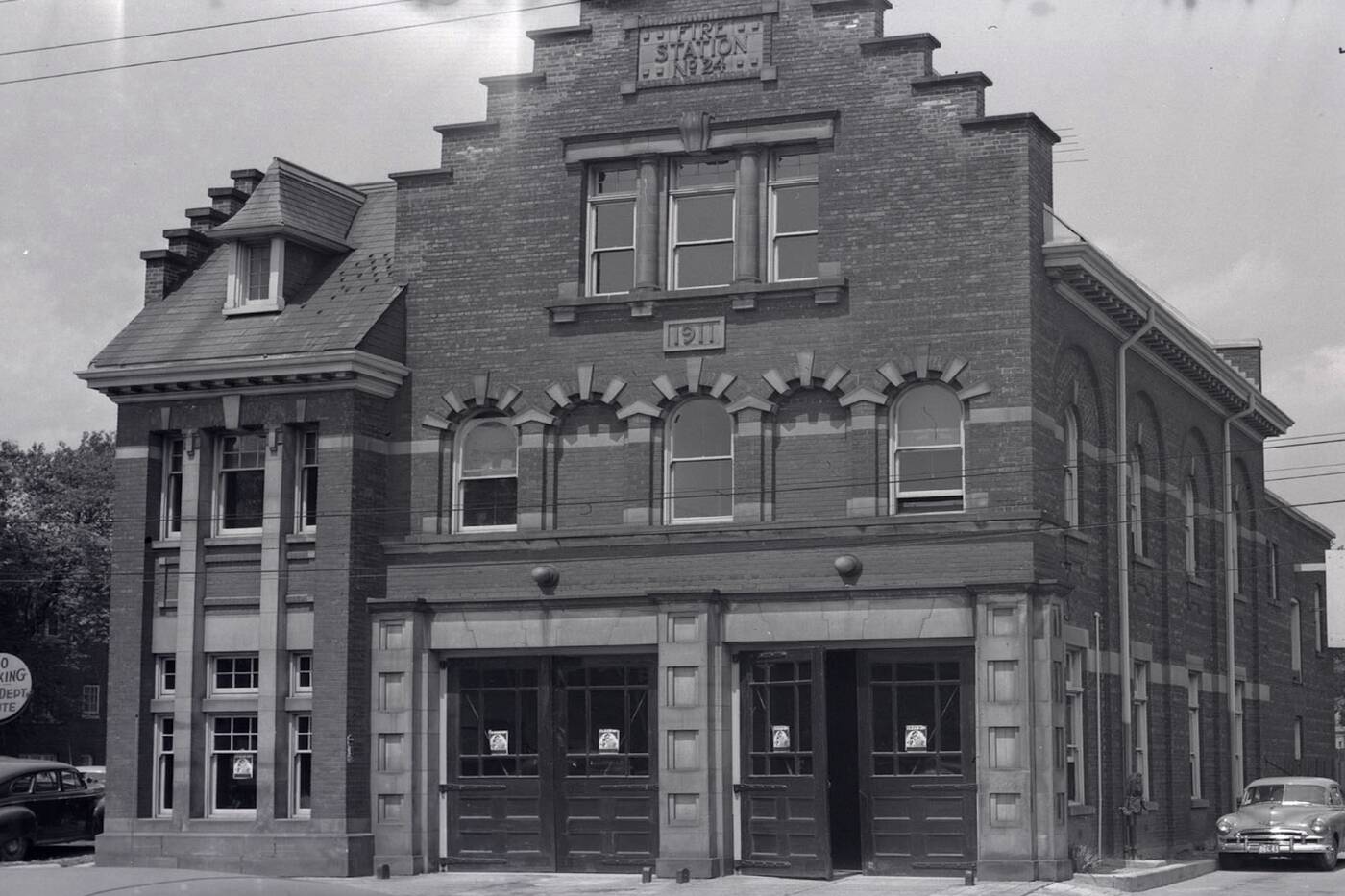 A view of the facade of the Balmoral Avenue Fire Hall in the 1950s, 40 years after its construction. Courtesy Toronto Public Library.

The Balmoral Avenue Fire Hall was associated with the architect Robert McCallum, who was the city's official architect from 1903 until 1913.

McCallum, who had surprisingly little formal training in architecture, however, most likely dictated the design of such buildings to two budding assistant architects in his office, John J. Woolnough and George F.W. Price.

These civic buildings give us an impression of Toronto's character in the 19th and 20th centuries.

Once lockdown is lifted, fire stations will most likely re-open for tours for small groups. The fire stations are also accepting donations for the Daily Bread Food Bank.