Whether it's the unseasonably warm temperatures, the distemper that's going around, or the pandemic weariness that we're all experiencing by now, raccoons in Toronto seem to have been getting up to even more trouble than usual — breaking into Tim Hortons, wandering into traffic, and otherwise requiring saving by resident animal whisperers.

This week in the raccoon news, one of the furry creatures has somehow managed to get themselves stuck on a pedestrian bridge in the CityPlace neighbourhood.

The helpless animal has been spotted by numerous residents on the yellow arches of the Puente de Luz Bridge that runs over the railroad tracks between Front Street and Iceboat Terrace. It has apparently been up there for somewhere between one and three days now, according to one local, who also says he's called 311 numerous times to no avail.

"They said animal services were notified," resident Patrick Gaebel told blogTO. "[Then] they told me 'if he can climb up, he can climb down,' and the second time I called last night, they said they were aware but can't do anything unless the animal is accessible."

Gaebel is now worried that nothing will be done to rescue the little trash panda, who he adds appears to be stressed out and hungry — and he's not the only one who is concerned. 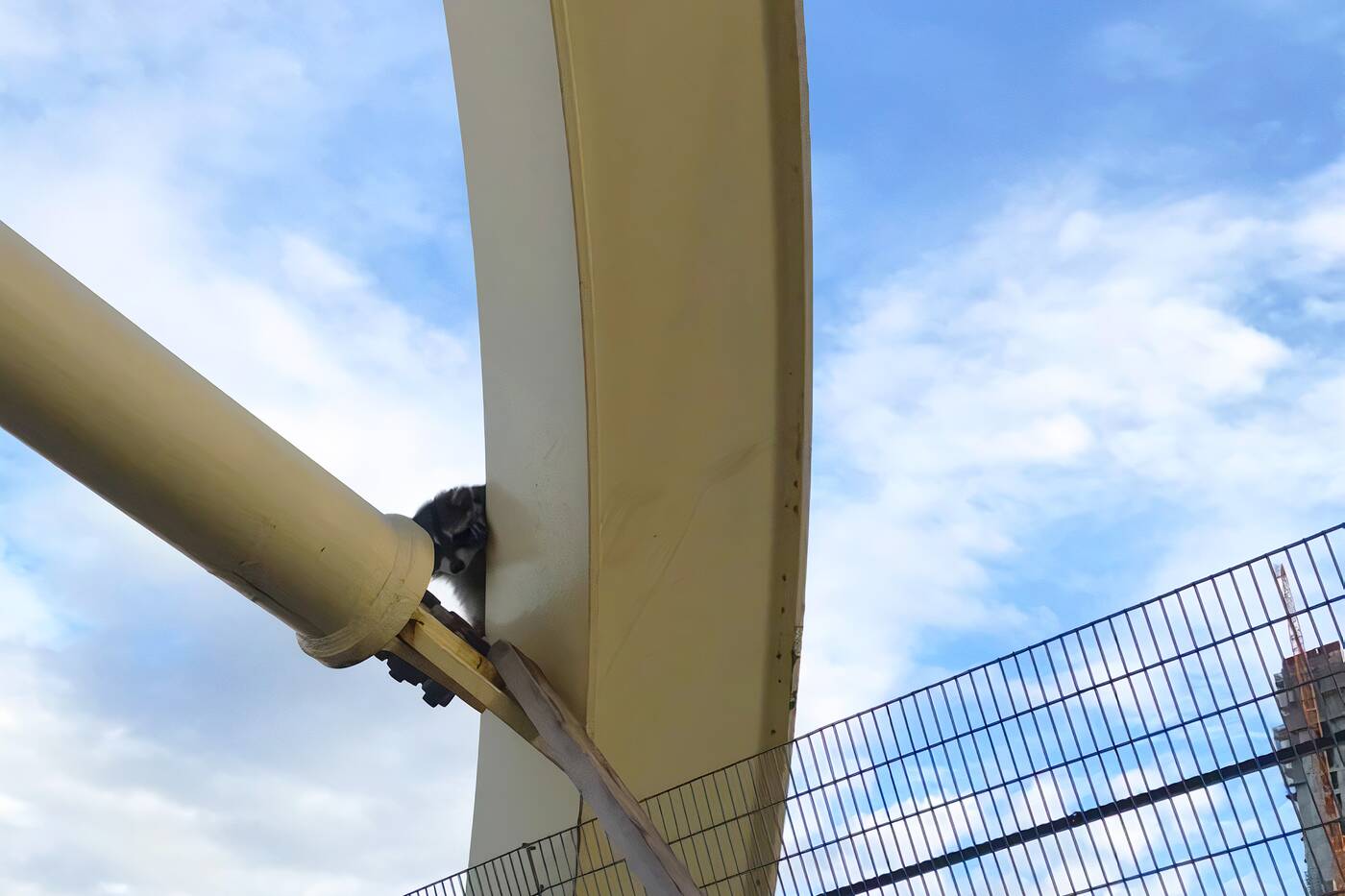 Tuesday is the third day he or she has been orphaned up on the arch. Photo by Patrick Gaebel.

Apparently the critter has been the talk of the area in recent days, with many neighbours calling the City as well as local wildlife organizations to report the incident. One even propped up a piece of wood to give the stranded pal a way down.

But as of noon on Tuesday, the raccoon is still trapped up there.

Toronto Wildlife Centre (TWC) asks residents in general to avoid direct handling and relocation of adult mammals such as raccoons in need of help, and to instead contain them in a cardboard box or bin until someone like TWC can come help — not possible in this circumstance, unfortunately.

"We will always do our best to help," a representative from the charitable wildlife rescue organization told blogTO, "but they're crafty little guys that are very curious and get into a lot of places. This is a very dangerous situation to try and get the raccoon from."

TWC says that if the animal is still up there Wednesday morning, they will send someone to try and get him down — which will likely be a very risky operation that could result in it jumping to the tracks below out of fear.

A 311 dispatcher from the City, which normally sends out animal services to respond to such incidents, told blogTO that because the raccoon is up so high and on a bridge rather than in a building, City personnel cannot assist. They added that the animals are usually able to climb up and down to such locations on their own.

With the number of the calls to the City and organizations like TWC, hopefully something can be done about the creature soon — if he or she doesn't finally muster up the courage to try and get down themselves.