If you've even visited Toronto for any amount of time, you've likely had at least one memorable encounter with a resident raccoon or two, who have long been the unofficial mascots of the city.

They scale our construction cranes, break into our stores and homes, swim in our pools and otherwise get up to all sorts of entertaining mischief in the city — including, apparently, trying to get a job at our fast food outlets.

A Reddit user taking a walk around their neighbourhood after a day of working from home last week happened upon a hilarious sight on their way past their local Tim Hortons, and was quick enough to whip out their phone and snap a photo of what appeared to be a racoon working behind the counter of the coffee shop.

"Timmies employee refuses to wear mask on the job," finance_student wrote in a since-deleted post on the social media platform alongside the photo, which shows the furry little friend in question investigating some cupboards under the coffee machines as a fellow employee watches on, clearly nervous and on the phone with what was likely animal control. 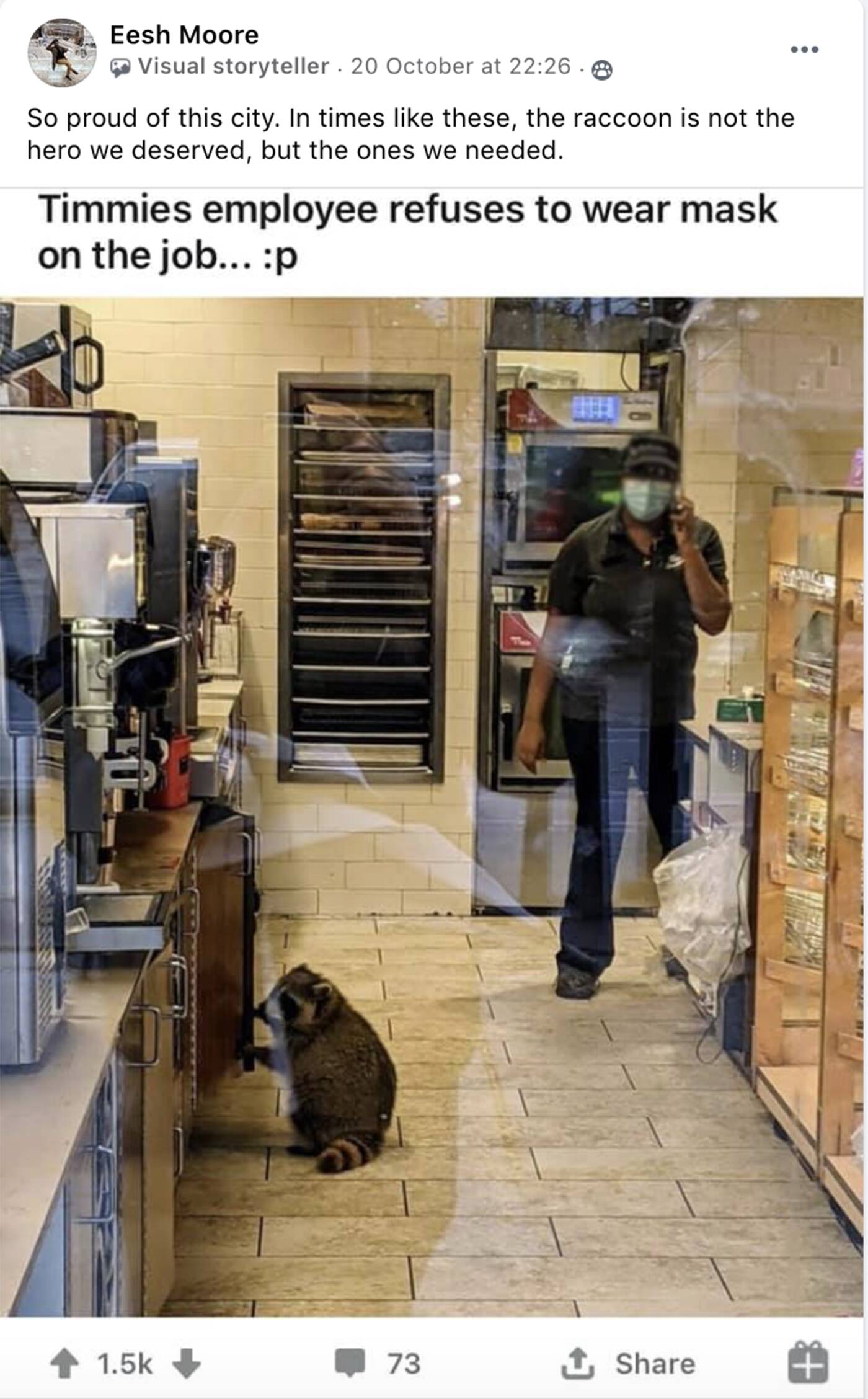 "I noticed this little trash panda that just couldn't wait to get his Timmies fix on... cute little bugger was rummaging through all the cabinets and didn't pay any mind to the Tim Hortons employees around him. Poor workers had no idea how to deal with it," the poster added, also noting that the lineup of customers was growing as workers attempted to deal with the situation.

"He’s wearing a mask alright, but he’s got it around his eyes!" one user cleverly commented on the instantly popular thread.

"'Uh, where do you keep the Tim Bits?'" another chimed in.

And yet another: "This is the most Toronto thing to ever Toronto."

According to the original poster, the raccoon was spotted from the window of the Main and Danforth Timmies, and the manager of the location was apparently pretty angry with their new addition.

"The raccoon was right up near the window at first rummaging around stacks of cups, then working his way down the cabinets, opening and investigating each one. No idea how he got in there. And the employees just kept their distance," the poster told blogTO.

The photo has since been circulated on multiple other platforms, including the Weird Toronto Facebook group, where it has been a great source of laughs (in the way that most of the city's raccoon moments are) for residents in what are some pretty dark times during our second iteration of Stage 2 lockdown and Ontario's second wave of COVID-19.

Unsurprisingly, this instance is not the first time one of Toronto's beloved masked critters has been caught on camera causing trouble while looking for food in a coffee shop.