The history of the Mimico neighbourhood in Toronto

Mimico is a former railway and farming town that eventually turned into a Toronto neighbourhood.

If you travel south-west of downtown Toronto along the lake, you will find Mimico sitting right on the edge of Etobicoke. It's known as the oldest of the former Lakeshore Municipalities, but its history goes even further back. 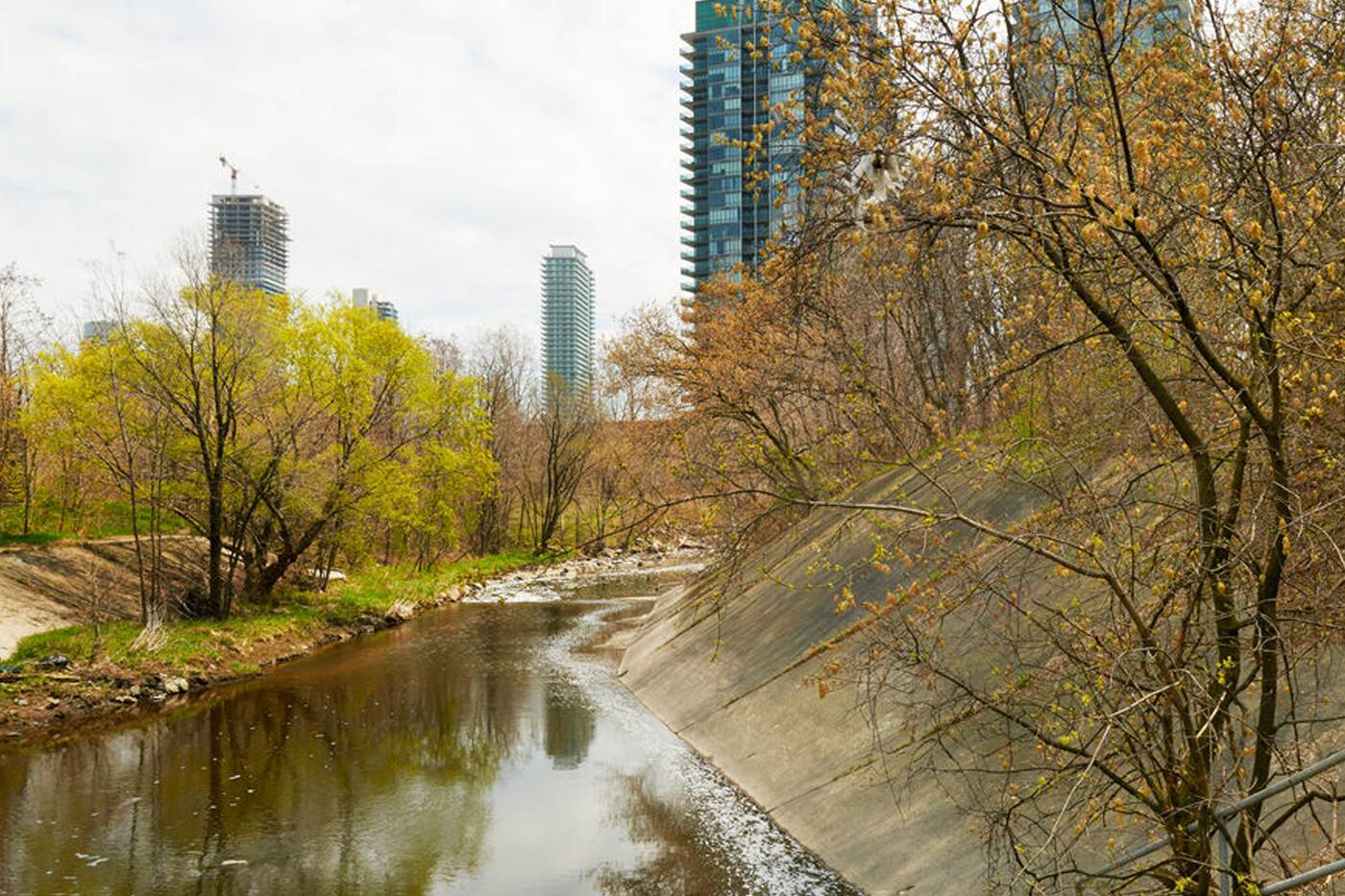 According to The Mimico Story by Harvey Currell, Mimico’s present-day landscape, much like the rest of Toronto, was formed during the ice age. It was submerged under Lake Iroquois, a scaled-up version of Lake Ontario.

As time went by, Mimico saw its share of humans living off of its land. The Iroquois, which included the Mohawk, Onondaga, Oneida, Cayuga, Seneca and later the Tuscaroras, were known as the Six Nations federation.

How Mimico got its name

They occupied the north shore of Lake Ontario and the area saw a lot of conflict between different groups during this time. After 1759, the land was taken over by the Mississaugas and Ojibways who gave the neighbourhood its name.

Mimico comes from the Ojibwe word Omiimiikaa (Omimeca), which means “abundant with wild pigeons.” The area was filled with passenger pigeons, who are now extinct. Over the years, Mimico became the most popular spelling and was adopted as the neighbourhood’s name.

According to the Etobicoke Historical Society, Mimico began developing thanks to native-born Canadian John William Gamble and the Parish of Christ Church.

The founding of Christ Church

In 1823, Gamble built a sawmill on the west bank with a dam where the Canadian National Railway bridge now crosses. Currel explains that although this is outside of Mimico’s boundaries, it's an important part of the history because it led to the founding of Christ Church parish.

The workers from the mill were spending Sundays fighting, drinking and carousing, which upset Gamble’s foreman. He insisted that Gamble build a church that could provide a Sunday service for the men.

In 1827, the Christ Church Mimico was officially established with the baptism of four children. This makes it the oldest Anglican congregation in Etobicoke. In 1832, Gamble conducted the services in a building located on Church Street, which is now Royal York Road. 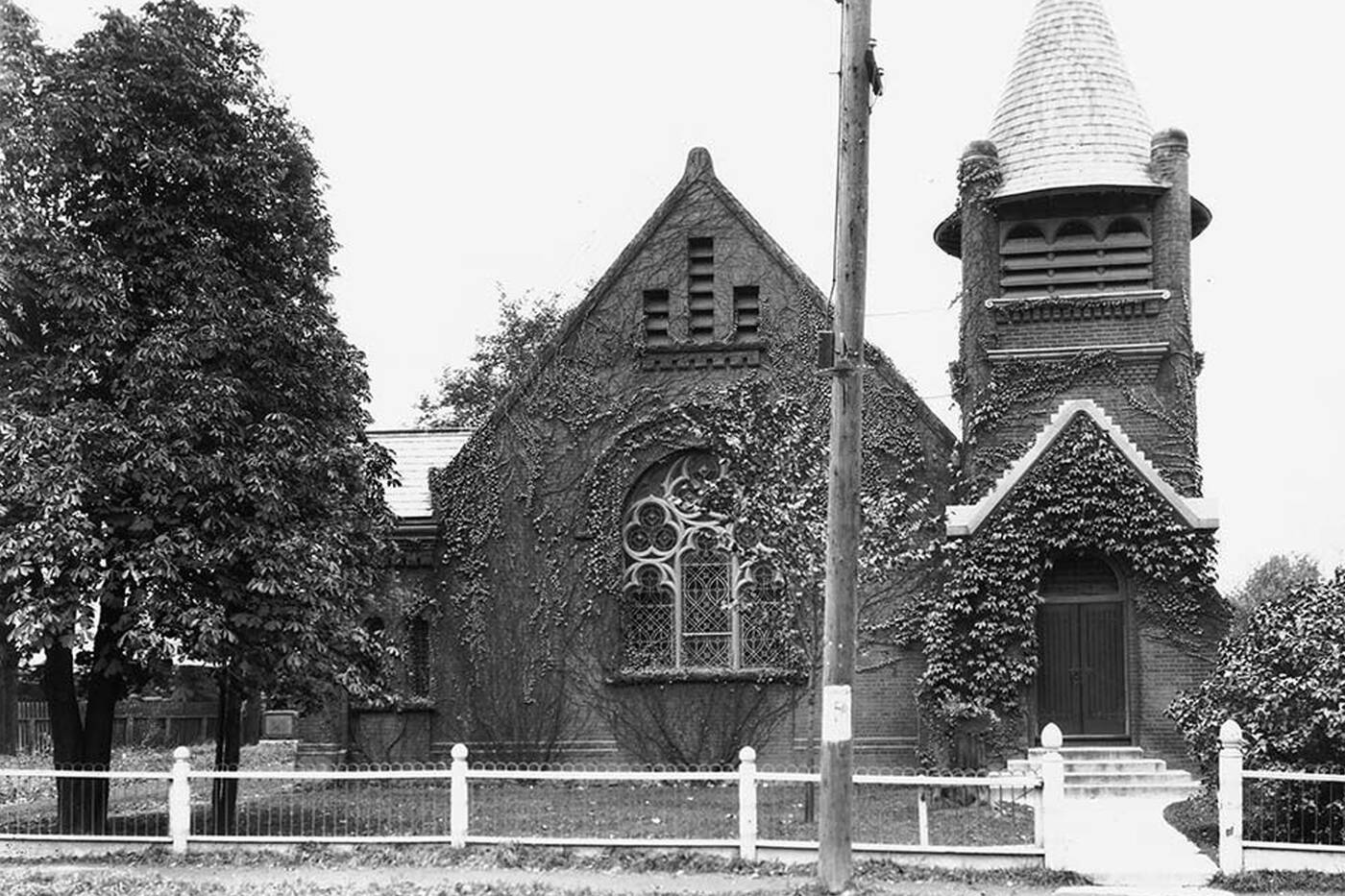 Christ Church in Mimico in the 1900s.

The beginnings of a railway town

In 1855, the railway line was built going right through Mimico. The Hamilton and Toronto Railway Company proposed a line that would connect Toronto with the Great Western at Hamilton.

After takeovers and different railway company mergers, the Canadian National Railway took over, and the branch line from Toronto to Hamilton through Mimico became known as one of the busiest sections.

The creation of the railway opened Mimico up to new residents, who realized they no longer needed to live close to their work. The neighbourhood saw an influx of working men moving into homes near the railway.

Community lots became for sale in Mimico, allowing for people to buy homes for decent prices. This was inspired by the Christian Socialist movement in England, where the goal was to aid poor individuals living in the slums of the city, as portrayed by Charles Dickens.

In 1858, Mimico celebrated the establishment of a post office. This was a big sign to residents that the neighbourhood was progressing and growing. It was located just south of the Railway Station on Church St. where St. Leo’s Church stands today. 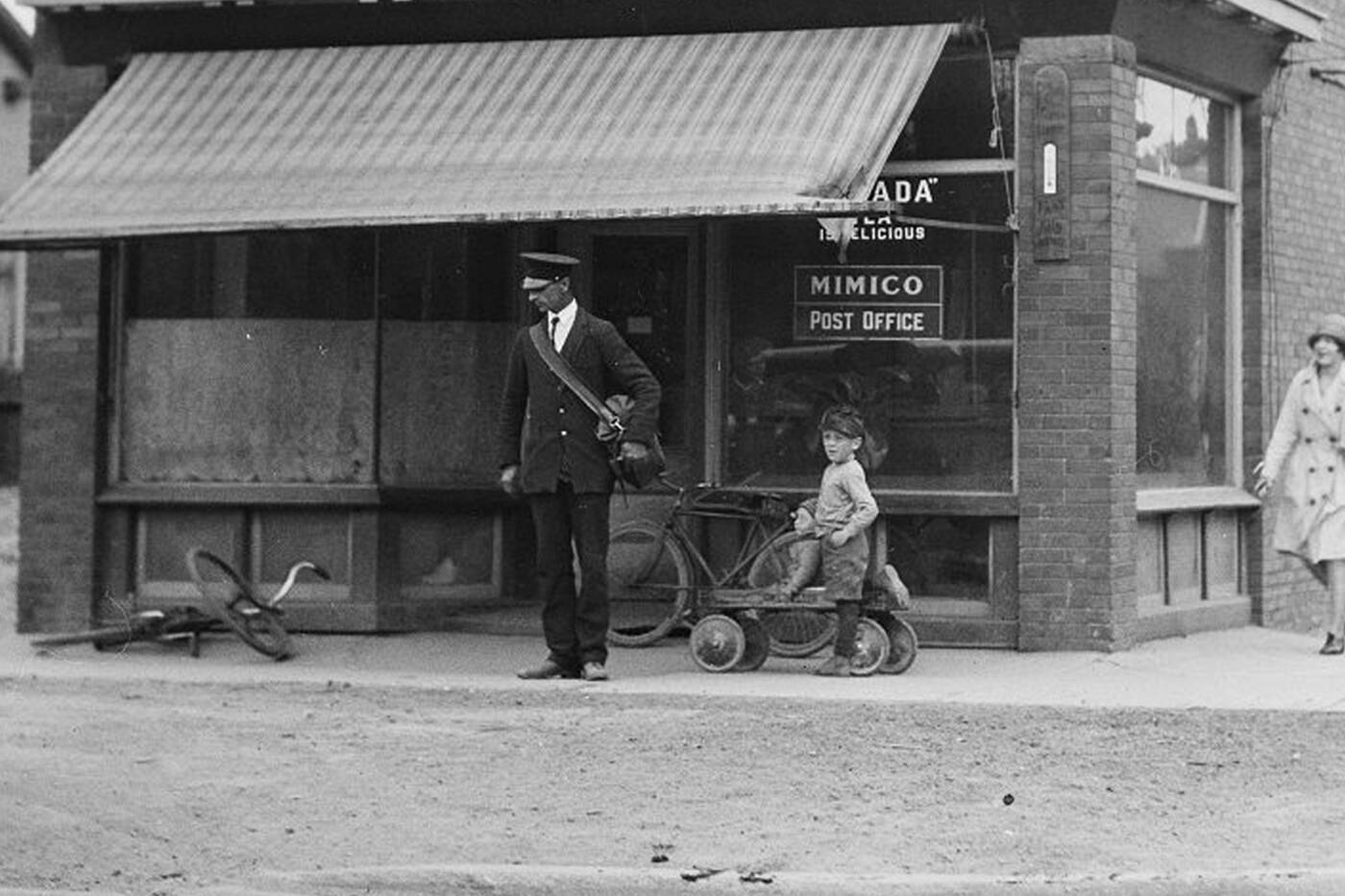 In 1905, Mimico became a police village, meaning it had a degree of independence while remaining a part of the township. According to Currell, Mimico “elected three trustees who would levy local taxes for local services only.”

A huge change came to Mimico in 1906 with the Grand Trunk Railway opened its Mimico Yards. It was a big deal for the neighbourhood and despite being named after Mimico, much of it was actually located in present-day New Toronto.

This railway became an integral part of life in Mimico and even brought a slew of new railway families into the community. 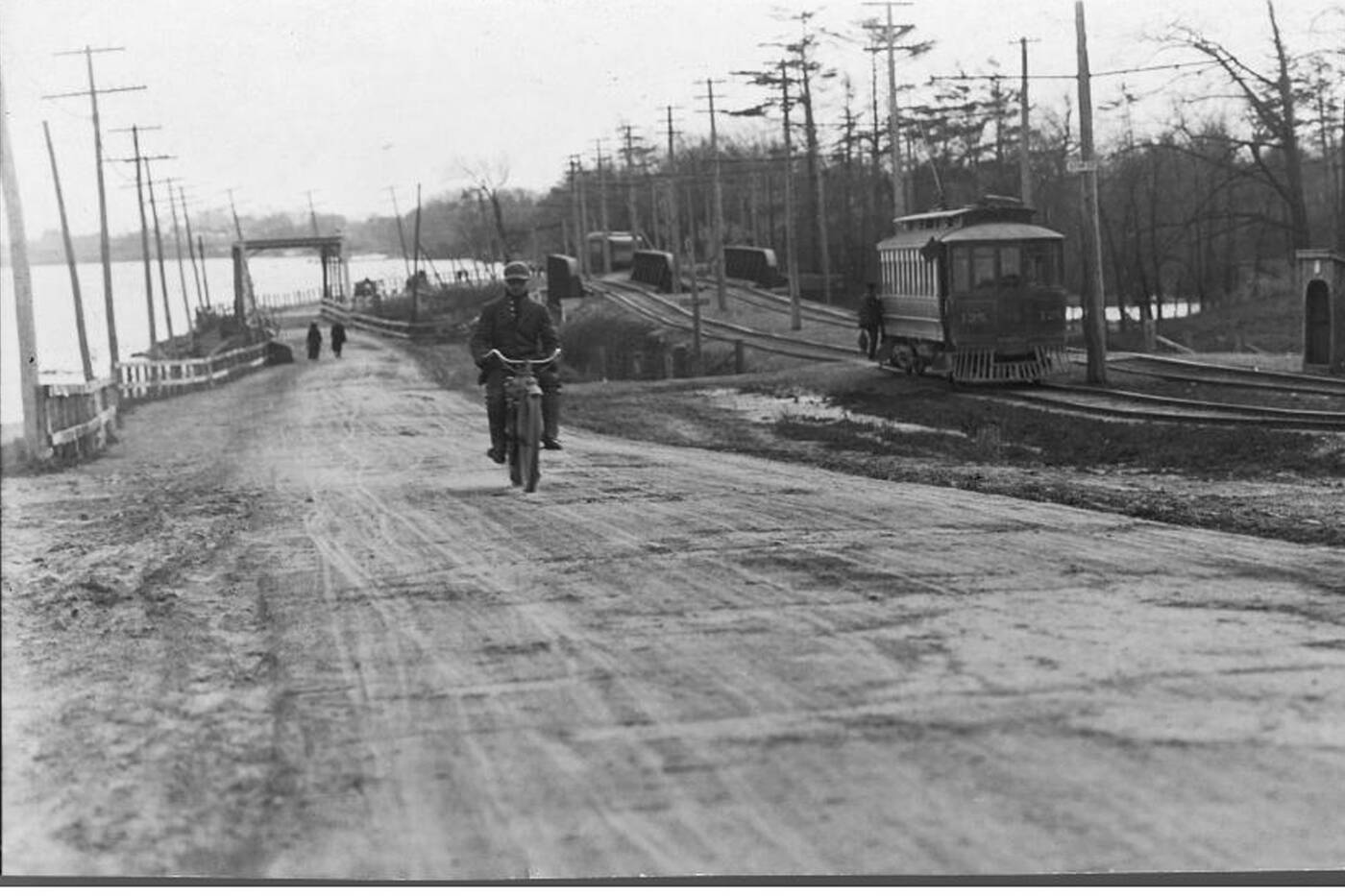 A man on a motorcycle on Lakeshore Road at Mimico Creek in 1910.

In the early 1900s, a hotel was built near the railway called the Windsor Hotel, which is today’s Blue Goose Tavern. 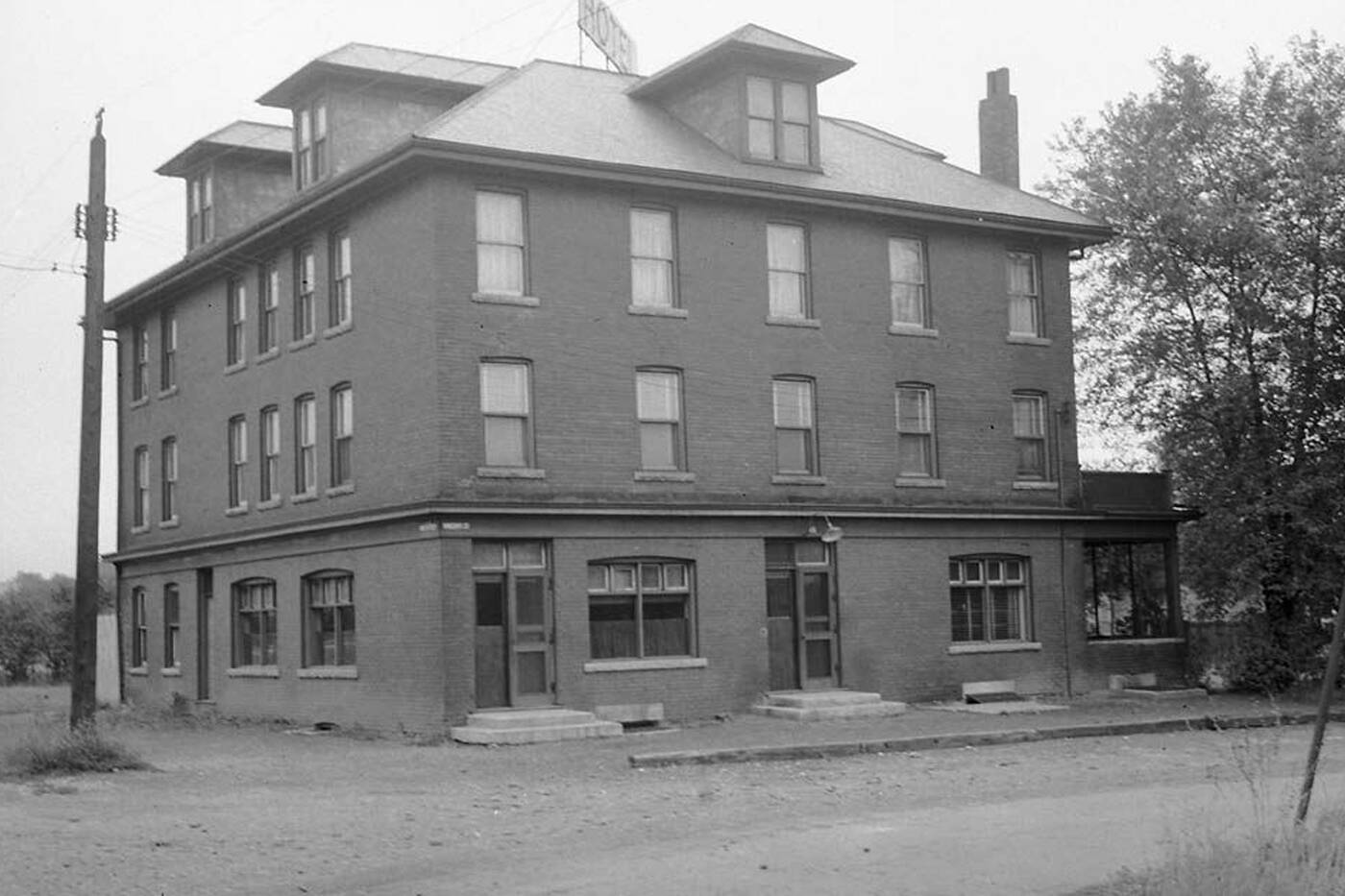 This was the same time that Mimico began attracting wealthy families to its long unobstructed lakefront. Soon luxurious lakeshore estates began popping up, each more grand than the next. An estate on present-day Miles Road even became a household name across Toronto.

In 1912, Arthur William Miles turned his 3-acre estate into a zoological garden, open for the public to enjoy. The zoo, called Miles Park, boasted monkeys, ostriches, horses donkeys and much more.

Despite its popularity, the zoo received many complaints about the smell it omitted and Miles and his animals reluctantly moved out of the neighbourhood in the 1930s.

In 1917, Mimico became an independent municipality and remained that way until it became a part of the borough of Etobicoke in 1967, and was then amalgamated into the city of Toronto in 1998.

In contrast to the somewhat pretentious mansions in Mimico, small bungalows began getting built in the 1920s. To support the quickly growing population, the next four decades were filled with the construction of family homes and low rise apartment buildings. 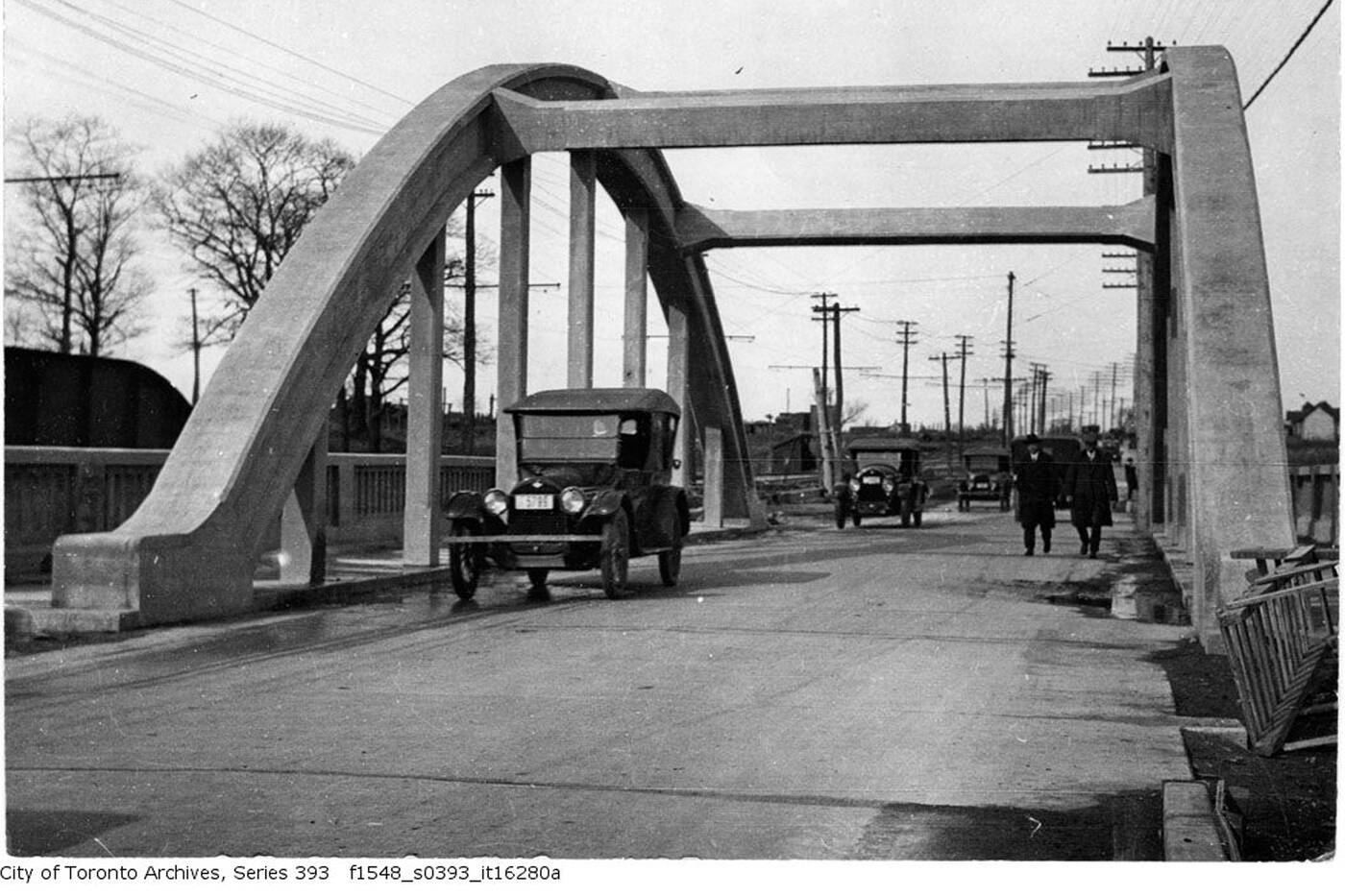 In 1928, the TTC gained access to the Lakeshore Road streetcar line and created the continuous Toronto Queen line, which connected Toronto to Long Branch. In the 1930s there was talk about building a subway under the CNR tracks on Burlington Road, but the idea received much criticism. 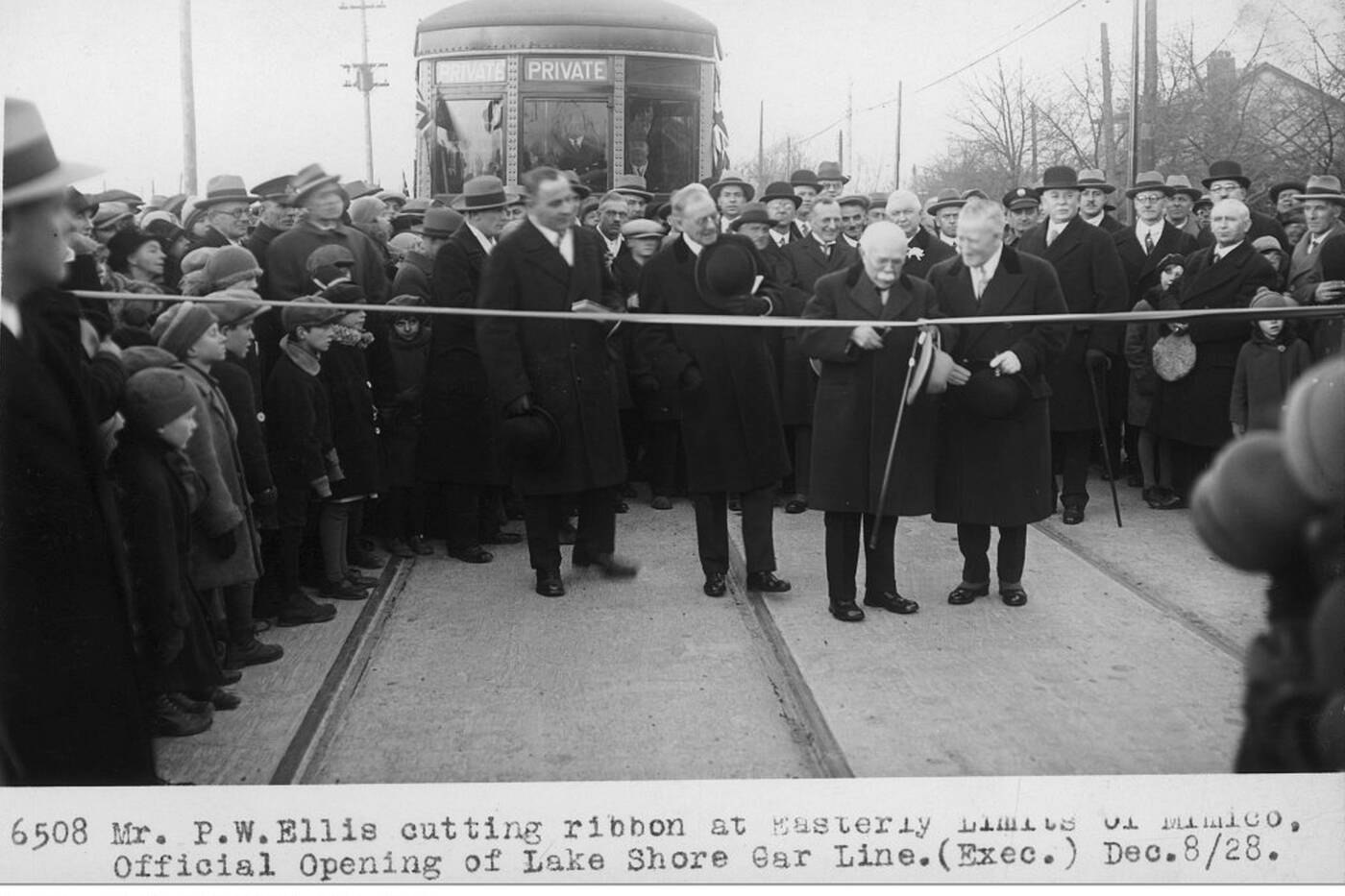 Mr. P.W. Ellis cutting the ribbon at the official opening of the Lakeshore Car Line on December 8, 1928.

The neighbourhood struggled greatly in the next decade, following the Great Depression. The closure of local businesses and skyrocketing unemployment rates left the future of Mimico on thin ice.

After WWII, it again received an influx of newcomers, moving into newly built one-story buildings. A more commercial strip was built along Lakeshore to offer more businesses a chance to survive in the neighbourhood.

In the late 1960s Mimico Centennial Library was opened in replacement of the overcrowded and rundown Carnegie Library. The latter played a huge role in the neighbourhood's development since it first opened in 1915. It was a gathering place for town meetings and even housed the offices for the municipality and hydro for seven years.

After residents began moving out to the suburbs, Mimico once again began suffering. This led Etobicoke to take action in 1984 and rejuvenate parts of Mimico as non-commercial areas. This was the same time that Humber Bay Park was opened to the public.

The kids that still lived in the neighbourhood mostly attended Mimico High School, which served in the early to late 1900s, and was located on the Royal York Road and Mimico Avenue. It later became an Adult Learning Centre and is presently John English Middle School. 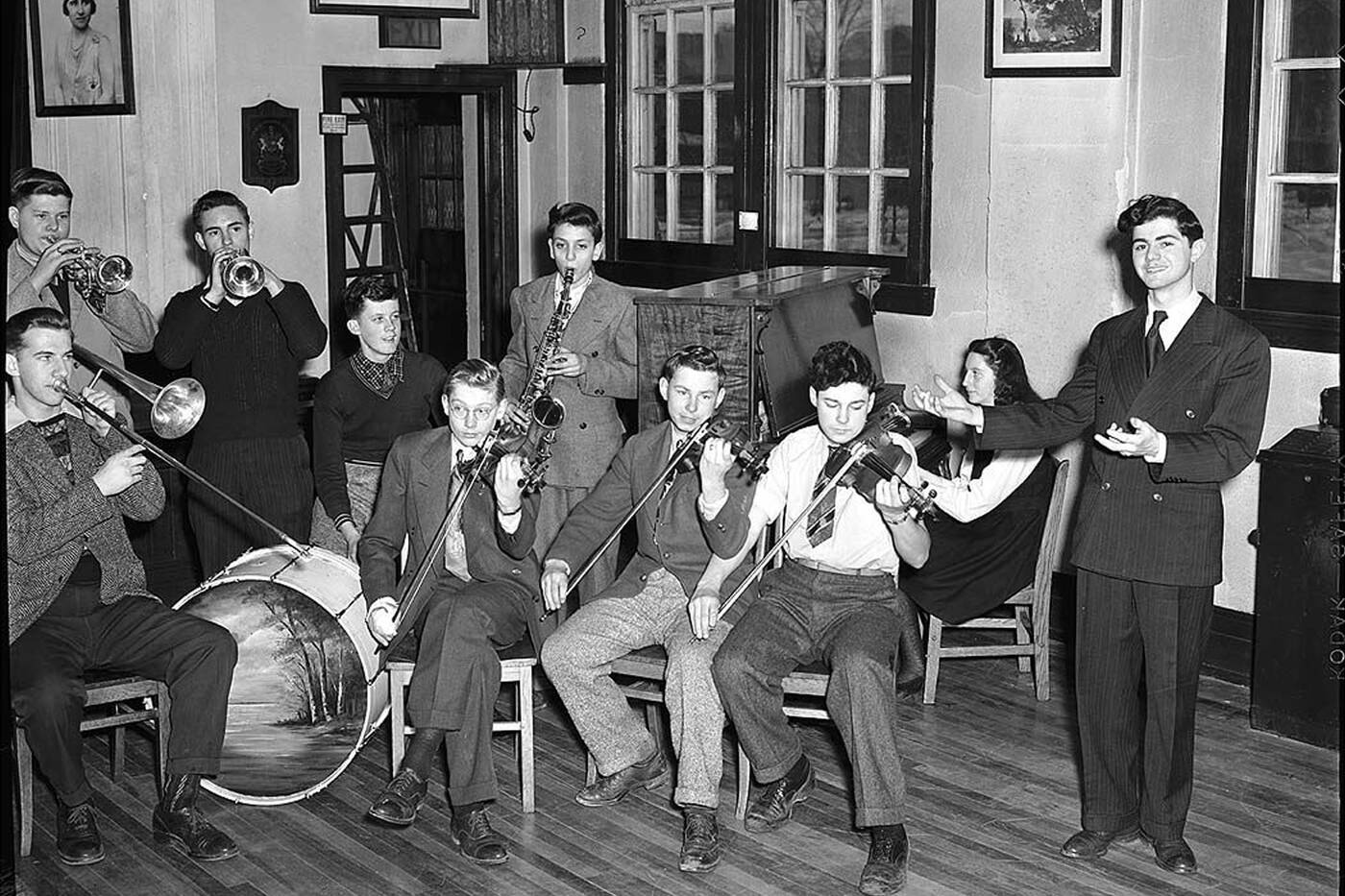 Band practice at Mimico School in the 1900s.

In the 1970s a new GO station was built in place of the 1855 station. The station now serves commuters going east or west from Toronto to Hamilton.

Condos by the creek

In the 1990s Mimico was seeing a boom in new townhouses, and more recently condominium buildings. There was worry that the neighbourhood gentrifying would cause more harm than good, but in recent years local businesses have been prosperous. 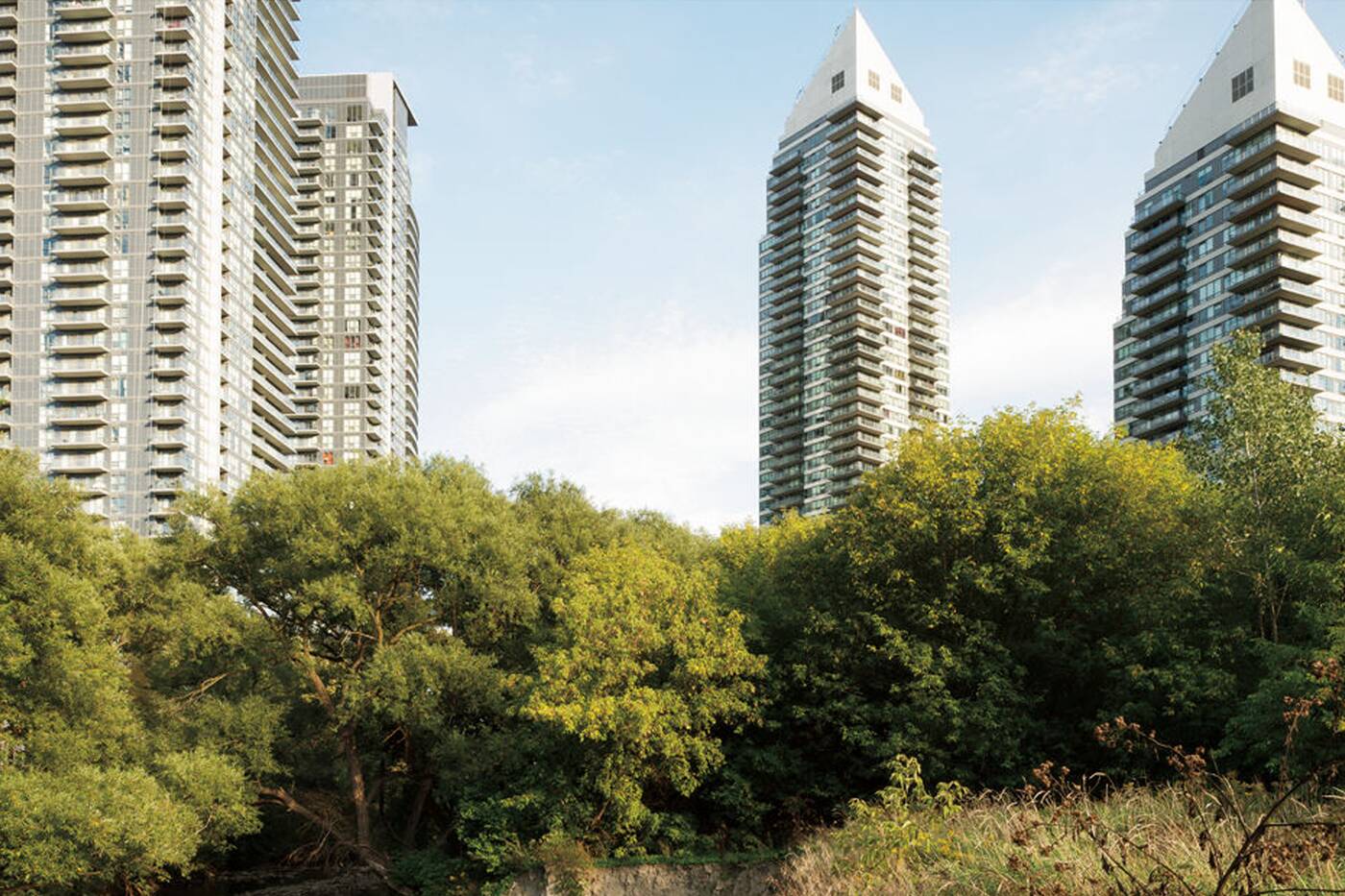 View of new condominiums in Mimico in 2016.

SanRemo Bakery, which has been in the neighbourhood since 1969, is one of the busiest bakeries in Etobicoke. The family-owned spot specializes in donuts, cakes and Italian cuisine. It is has become a hotspot for both locals and people travelling from all over the GTA to get their hands on some sweet treats.

From a railway and farming community to one of Toronto’s up-and-coming neighbourhoods, Mimico’s development has been far from short and simple, but has made for a rich history.