As any Torontonian can tell you, public transit in and around our city is... something else.

Aside from delays that sometimes feel more like a scheduled part of any commute than an unanticipated disruption, shuttle bus snafus, overcrowding and derailments, there are also the countless proposals for new projects, some of which never come to fruition or end up a total mess.

And the expansions and new lines that do go forward often end up costing the city billions in overruns and delays, according to a new 88-page study released by the Residential and Civil Construction Alliance of Ontario, which notes that as the years progress, "the transit-building price spiral is accelerating at an alarming rate" in the Greater Toronto Area.

Why are Toronto subway capital costs almost 9x higher today than in the 1950s? The answers are found in comprehensive @_RCCAO report by @StephenWickens1 -- along with recommendations to reduce expenditures and "political meddling". https://t.co/5whZMhNdEv @metrolinx #ttc #ONpoli pic.twitter.com/pzSjkKWFx9

Even taking inflation into account, the alliance says taxpayers will have to pay exponentially higher amounts for forthcoming transit projects than they have for previous ones, even with plans for the Hamilton LRT line completely scrapped, and cost-saving measures for other proposals in place.

The report looks at new transit lines or expansions in Toronto since 1954, noting their costs per kilometre in 2019 dollars with inflation.

While things like the Bloor-Danforth line extensions from Keele to Islington and Woodbine to Warden only costed $57.1 million (in 2019 dollars) per kilometre, forthcoming projects like the Ontario Line, the line 2 subway extension to McCowan and Sheppard and the Yonge North extension to Richmond Hill are going to cost a staggering $703.2 million, $723.7 million and $756.8 million per kilometre, respectively.

The assessment cites a chart indicating that price per kilometre of transit construction has indeed gradually increased as time has passed, with no project costing over $100 million dollars per kilometre until 1996 and only creeping over $200 million per kilometre in 2002 (all in 2019 dollars). 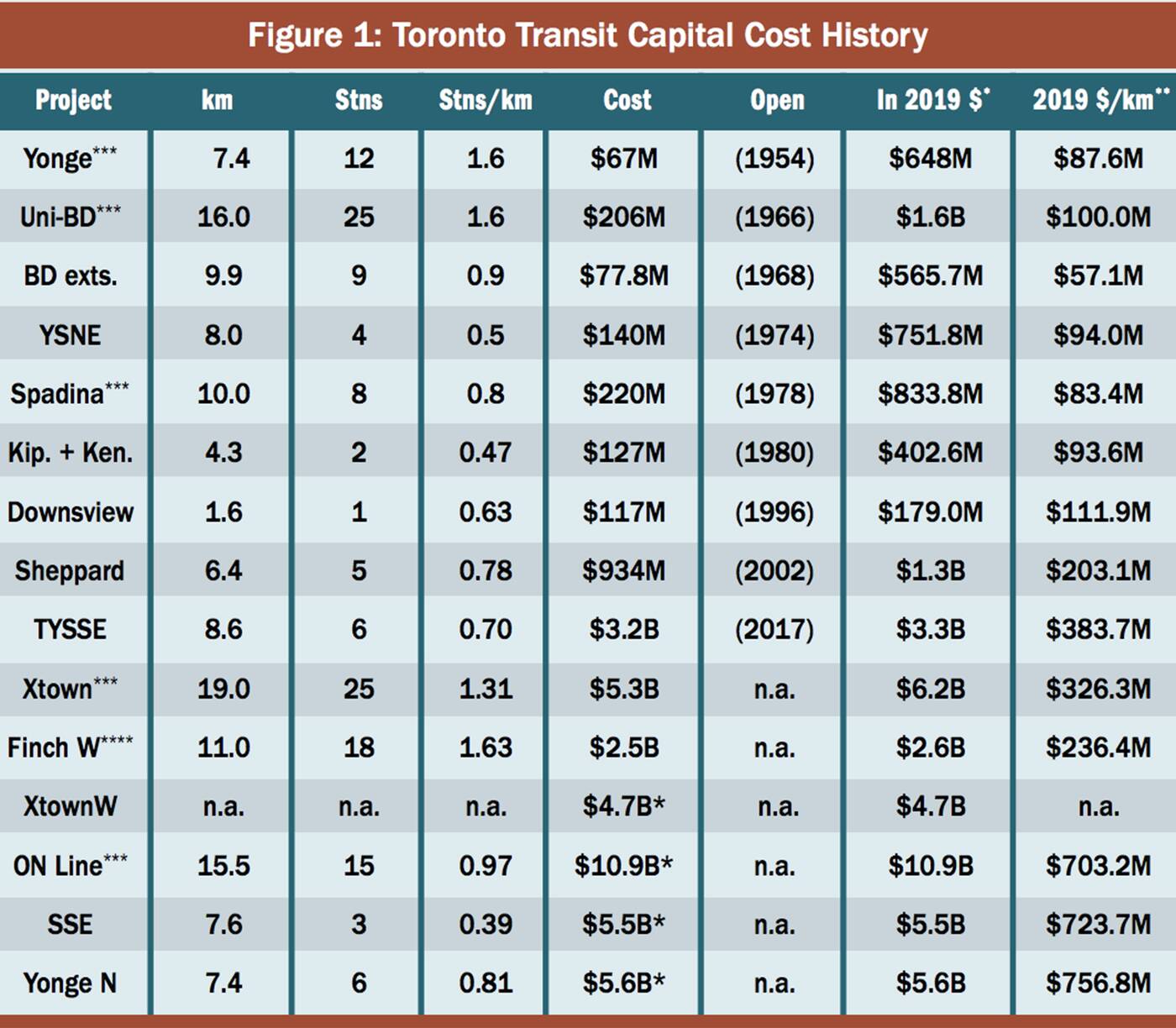 Cost of Toronto transit projects over time, with inflation taken into account. Image via RCCAO.

It is only the three most recent initiatives named above that are slated to cost more than $384 million per kilometre — and substantially so, at more than double or even multiple times more than other transit projects in the city's history in equivalent dollar value despite "fewer stations per kilometre and traverse simpler, less-dense contexts."

Even the Eglinton Crosstown LRT — which has been delayed — is only on track (no pun intended) to cost $326.3 million per kilometre for a total of $6.2 billion; nothing to scoff at, but nowhere near the $10.9 billion for the Ontario Line. (Though this is in part due to the fact that the LRT will be partially above ground, the Ontario Line is likewise due to have portions above ground to cut costs.)

This a great, much-needed, and thorough report by @StephenWickens1 on the high cost of subway construction in Toronto. This is an absolutely critical issue, meaning we are getting much less transit for the $$$ than many of our peer cities. https://t.co/4GPHAUz1pJ

The biggest factors in these skyrocketing costs, the study finds, are station depths — some stations on the Toronto-York Spadina Subway Extension, completed in 2017, go seven storeys into the ground — as well as things like rising labour costs and reduced construction productivity, corridor clearing and maintenance, and the cost of delays and "political meddling in the planning process."

As a result, the RCCAO has issued ten key recommendations, the first of which is to expand the conversation about rising transit costs, which it defines as a crisis, beyond "the usual transit experts."

Other suggestions include minimizing the use of underground tunnels and stations (and keep them shallow), rethinking aesthetics and architecture to be "uplifting... [but] not monuments to architects’ egos," proactively addressing the skilled-trades shortage, approving long-term transit plans based on actual evidence rather than political support and have more openness and transparency for all stakeholders involved.

While this @RCCAO report about the soaring costs of subway building in Toronto was written before the Covid-19 pandemic, it's going to be twice as relevant now if Ottawa and Queen's Park are serious about spending infrastructure money as well as possible. https://t.co/z0lnPsOyXl pic.twitter.com/kLxa577Ulm

Though public transit may be the last thing on residents' and officials' minds these days, it is definitely interesting to see such a detailed assessment of what is clearly a concerning issue in the way our city deals with crucial infrastructure expenditures.