News that the West Toronto Railpath would be getting an extension has been circulating for years, but the project is closer to realization than ever before.

The City has finalized the design details for the extension, which will expand the West Toronto Railpath multi-use trail south from Dundas Street West at Sterling Road to Abell Street at Sudbury Street.

In light of this, a public consultation is being held on February 26 at the Museum of Contemporary Art so anyone interested can review the final design elements (bridges, landscaping, community connections) and learn more about the project and timelines.

The recently completed design phase — which was carried out jointly by the City of Toronto and Metrolinx — includes detailed plans and drawings for four pedestrian-cycle bridges, landscape architecture and plantings as well as trail amenities and elements such as signage, lighting, seating, waste and recycling receptacles, bike parking options and more.

The pedestrian-cycle bridges are set to be erected over the Barrie rail corridor south of Dundas Street West (with provision for future connection to Sorauren Park), over Lansdowne Avenue, over Brock Street and over Queen Street West.

"The Railpath will be designed as a multi-use facility and will function as a shared space between a variety of different users including cyclists, pedestrians, rollerbladers etc," according to the City.

"Generally, the paved portion of the trail will be 3.5 metres or wider, based on available space from Metrolinx Rail Corridor." 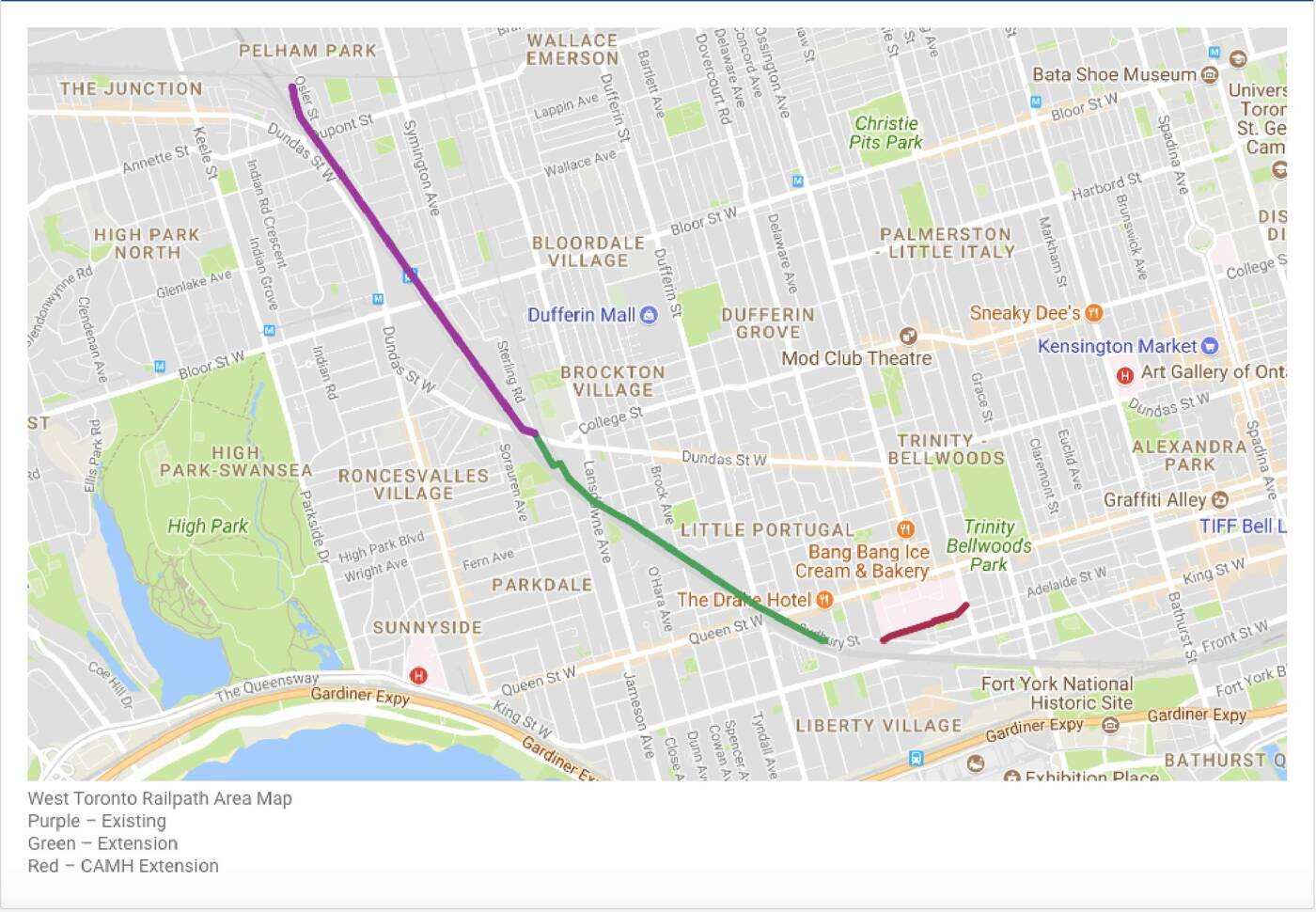 A map portraying the location of the West Toronto Railpath extension.

The City says the construction timeline for the project has yet to be determined and will be subject to available funding.

The majority of the land that'll be included in the Railpath extension is located within the Metrolinx-owned rail corridor, and coordination with Metrolinx is required due to their planned construction for rail corridor widening.

While the detailed design phase was funded by equal contributions from both the federal government and the municipal government, funding for construction has not yet been secured.

Based on the Environmental Assessment study from 2016, the estimated total cost is $23 million.

"Public places that are actively used by residents are generally regarded as safer and more comfortable for all ages – the most effective crime prevention approach is to encourage a high level of activity along the trail system," the City notes.

"Trails support the opportunity for physical activity through walking, running, rollerblading and cycling which is in tune with the City’s public health objective to encourage physical activity to improve the health of Torontonians. Building trails that are high-quality and with accessible infrastructure also promotes social equality."