Experts say flu season in Toronto is about to get worse

A strain of influenza that's particularly hard on young adults is starting to causing a ruckus for the first time in years, say public health officials, as temperatures drop and everyone heads indoors to breathe each other's germs.

H1N1 is the strain in question. You may remember it as the "swine flu" from back in 2009, when it killed at least 428 people in Canada.

The federal government's FluWatch surveillance program shows a total of 13,766 lab-confirmed cases across the country this season to date as of December 28, 99 per cent of them classified as "influenza A viruses." Of that 99 per cent, 94 per cent of cases involve the H1N1 virus.

. @TOPublicHealth says there are a noticeably higher-than-average number of reported flu cases this year. https://t.co/L7Re1KPtbo via @CityNews pic.twitter.com/M4SHiV2zZ0

Unlike the strains of flu we've been seeing over the past few years (mostly H3N2, which hits older adults hardest), swine flu tends to affect more individuals under the age of 45.

Children and young adults are particularly at risk, according to the Public Health Agency of Canada, which says the number of kids admitted to hospital with influenza this season so far is twice as high as it was last year at this time.

And we haven't even seen the worst of it yet, if doctors are right about when the flu will peak this time around.

Canada's Chief Public Health Officer, Dr. Theresa Tam, said this week that "influenza season is in full swing" with rates of the viral disease continuing to rise in most parts of the country. 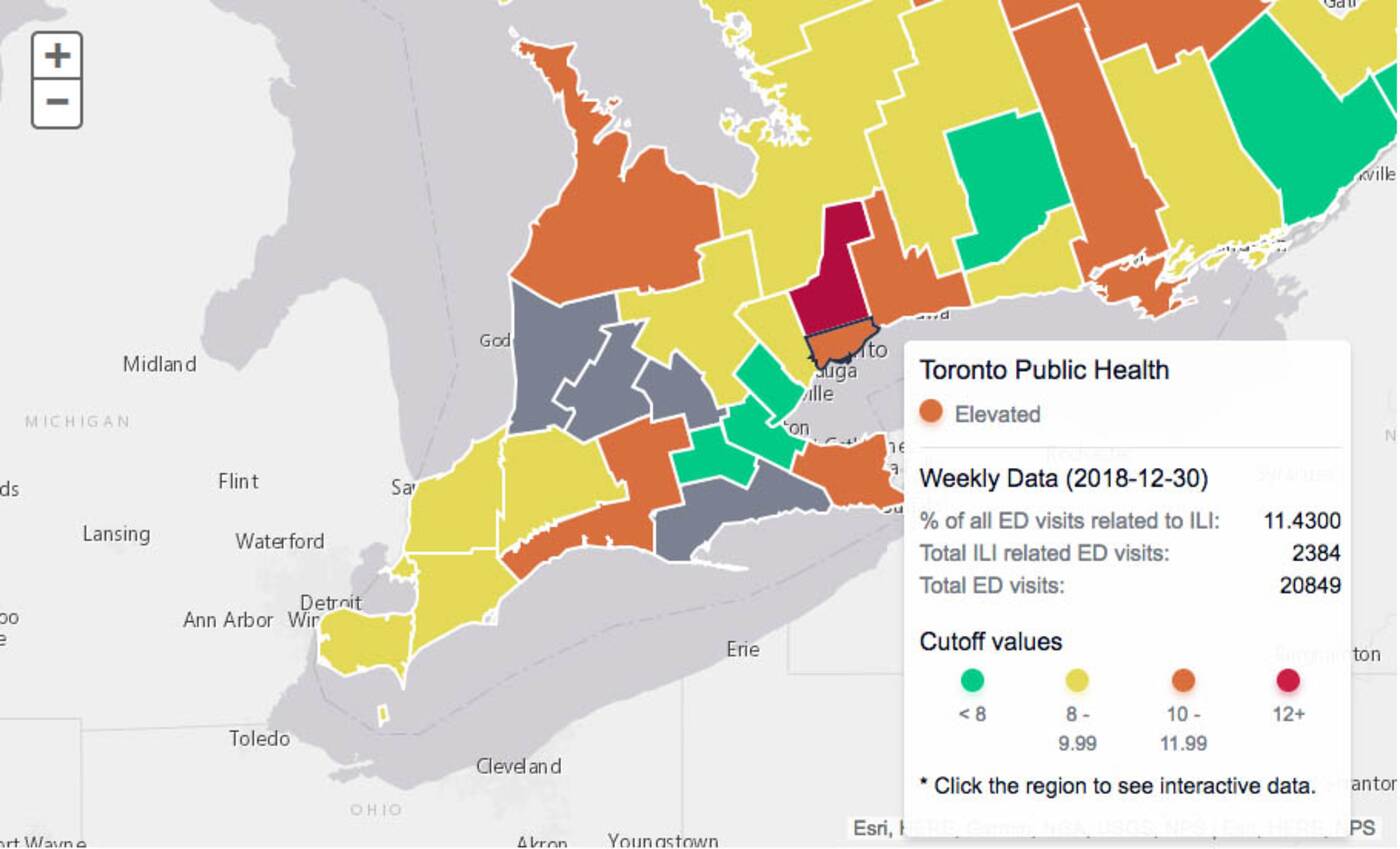 The public health agency of Kingston, Frontenac and Lennox and Addington tracks flu severity status across Ontario based on reports from 97 per cent of hospitals across the province. Image via KFLA Public Health.

Toronto, specifically, is showing an "elevated" level of influenza-like-illnesses based on hospital reports. In nearby York Region, such activity is currently considered "high."

Fortunately, it's never too late to get a flu shot (and start washing your hands more often).

Those concerned about the virus should note that flu shots are still available and completely free at most pharmacies, walk-in clinics and doctor's office in the province. All you need is an OHIP card and like, 10 minutes to spare.

It's better than seven to 10 days of fever, coughing, headache, chills and whatever other lovely symptoms the invading viruses bring out in human beings, but that's just my opinion. Talk to your doctor for advice or call up Telehealth whenever.