IKEA bought that haunted couch back from someone in Toronto

Earlier this month, a tortured Toronto man famously listed his couch on Craigslist for the bargain basement price of just $150.

On the surface, it looked like the same comfy, minimalist love seat you've seen in at least five of your friends' condos — the IKEA Kivik — but inside lurked something spooky. Sinister, even.

"I had inadvertently entered into a game of chance with a mysterious man passing through Toronto on his way to French Polynesia and won this couch 2 months ago," wrote the seller, noting that he'd been experiencing "nightmares involving hellish imagery" since bringing it home.

"I have seen and felt the seats compress when no one is sitting on them and the couch makes creaking noises at night regularly between 3 a.m. and 4 a.m.," he continued. "Other than that, it is quite comfortable." 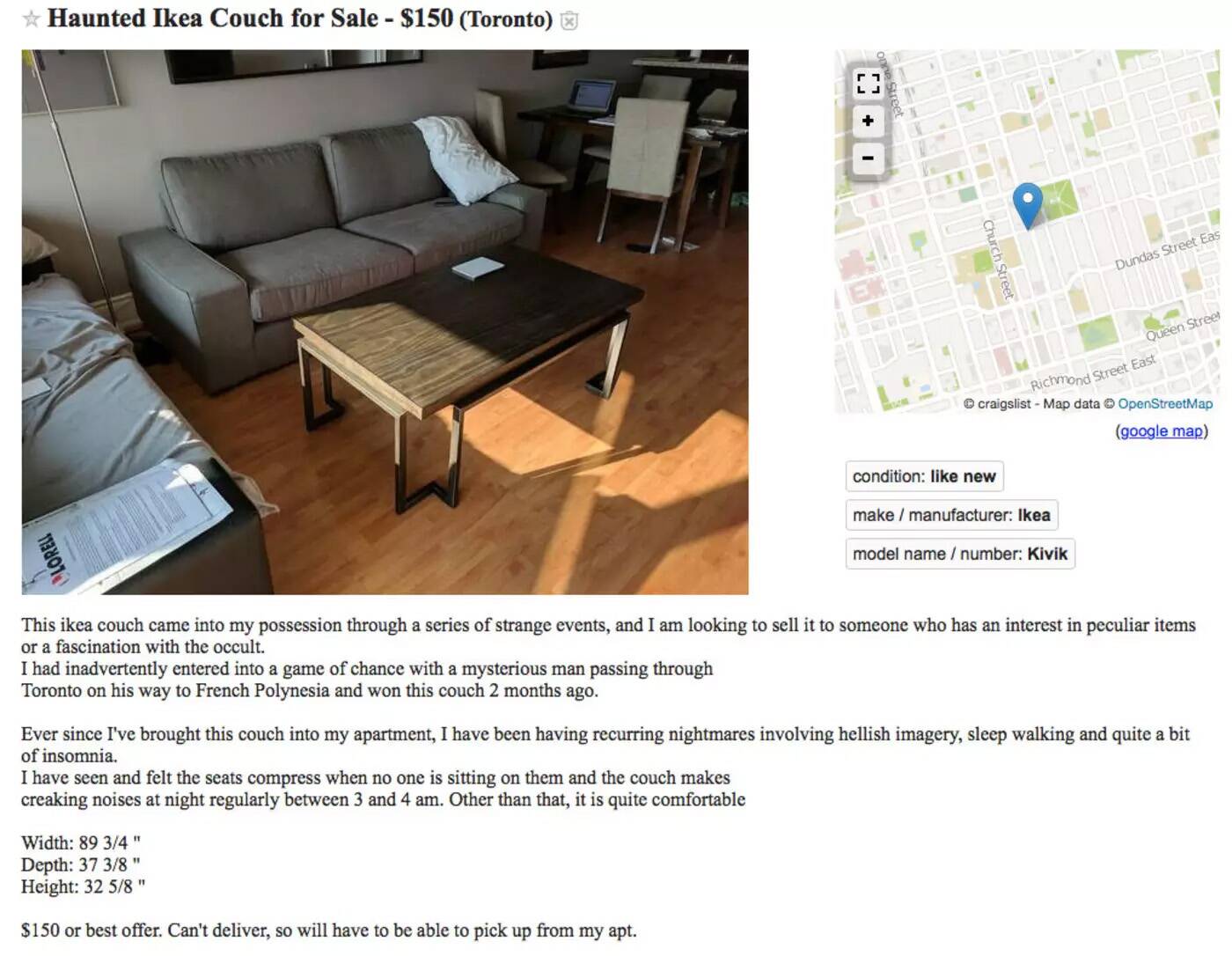 A Toronto man says he was forced to sell his couch on account of the fact that it was haunted. Screenshot of Craigslist.com.

A couch of this type, in decent condition, should be an easy sell at $150 (or best offer), but it didn't sell — at least, not to anyone who wanted it in their house.

Enter the Swedish furniture giant from whence it came.

IKEA Canada announced today that it had purchased the haunted Toronto couch after seeing stories of its existence in local media outlets.

"We were inspired to see the seller's drive to give the couch a second life through resale," wrote IKEA Canada spokesperson Kristin Newbigging. "After all, one man's supernatural, is another man's super comfy. Apparition… but still in good condition!"

We're not sure whether we believe in ghosts, but we definitely believe furniture deserves a second chance. So we bought it. Click the link in our bio to read about the Spooky Sofa. @blogto #Halloween #Halloween2018

Newbigging says that they contacted the seller and, after learning that he hadn't yet offloaded the couch, made an offer. The Toronto-resident was "happy to trade the sofa for IKEA gift cards."

"We picked up the couch on Monday and are just evaluating its condition," says Newbigging. "Based on any item's condition, we look to see if it’s fit for donation, re-sellable or recyclable."

For now, it's starring in a fun/spooky Halloween video on the brand's Instagram page.

"We genuinely hope he can find something less haunted more suited to him and his home," says Newbigging of the seller.