It's not news what the construction of Toronto's newest subway has done to Little Jamaica.

The Eglinton West neighbourhood that has historically been the landing ground for diasporas from all over the Greater and Lesser Antilles — Jamaican immigrants first —  has basically been decapitated by the Eglinton LRT. 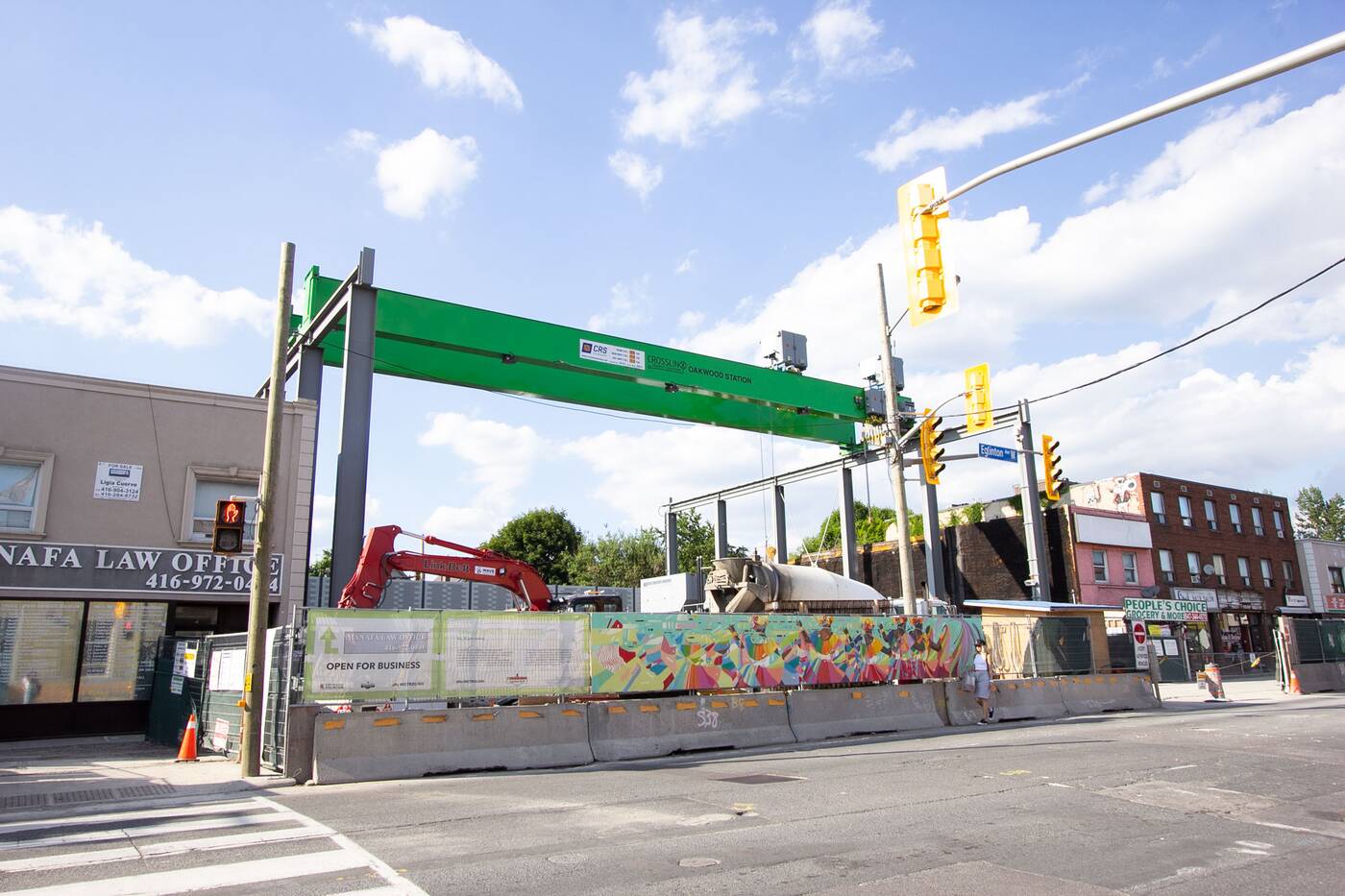 Construction on the Oakwood subway station began in 2014.

Artery-clogging traffic and clouds of dust coating businesses in layers of dirt: these are just a few side effects of the work being done on Line 5's Oakwood subway station, which has been in the making since 2014.

It's enough to deter even the most faithful non-locals from this strip between Oakwood and Marlee Avenue. What was once a five-minute rush hour drive from Oakwood to the Allen has now become a 30-minute affair. 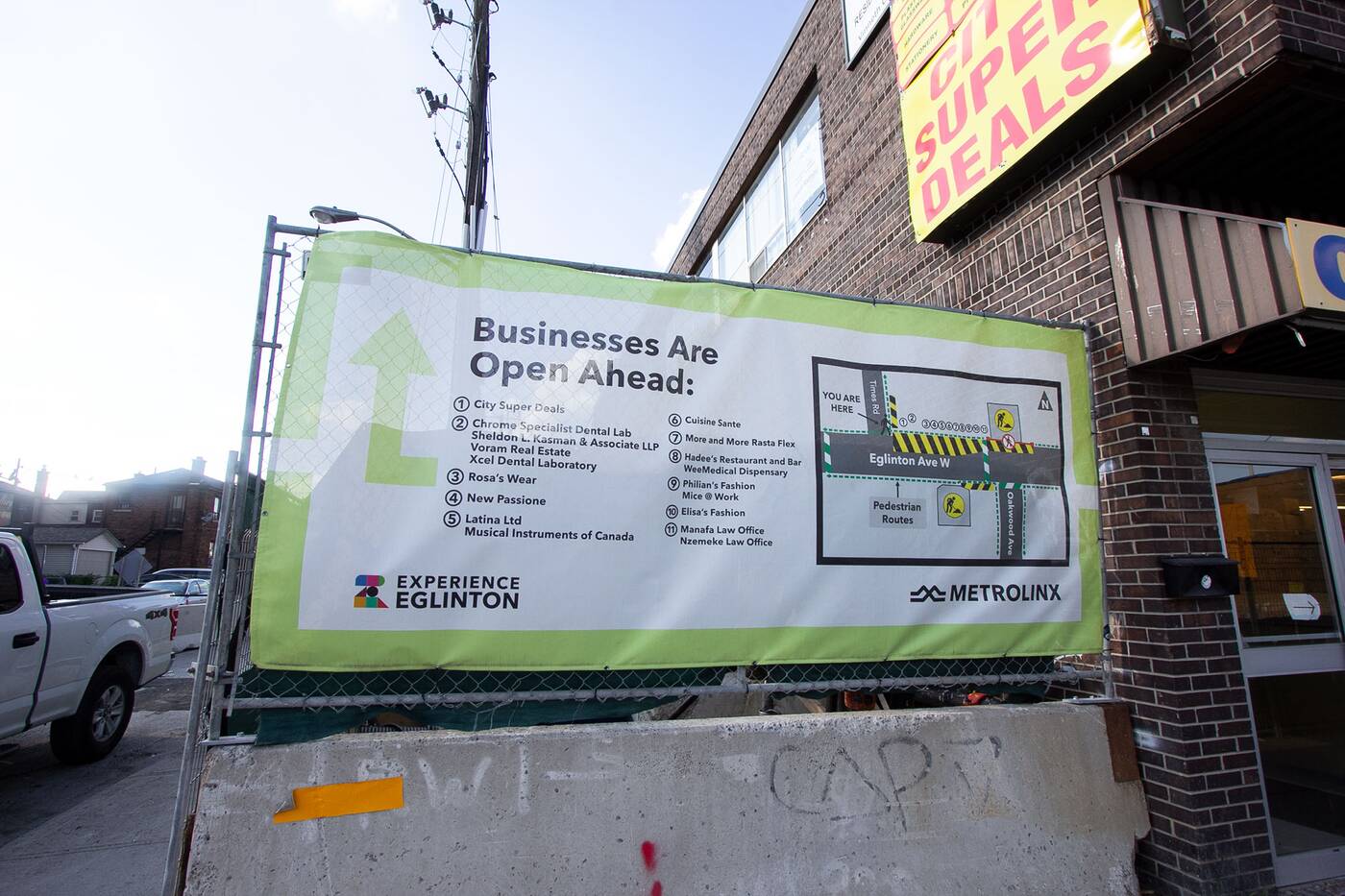 The LRT construction has closed off the main sidewalk for many businesses in Little Jamaica.

And while the incoming subway promises a future of accessibility with a new station right in the heart of Little Jamaica, the question is whether or not the current businesses there will survive that long. The LRT will be finished in 2021, if we're lucky. 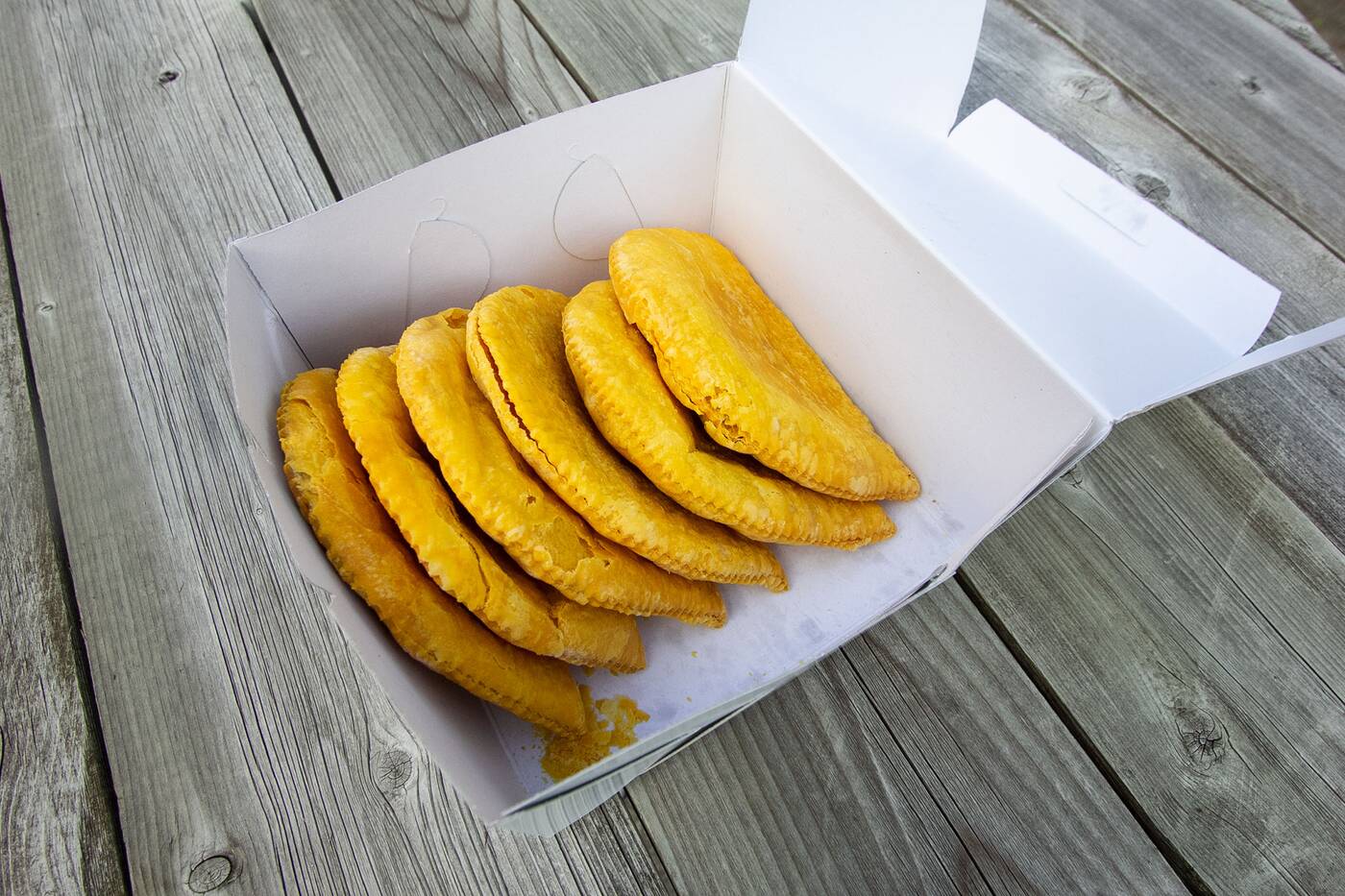 The Jamaican patties from Randy's are some of the best in the city.

Randy's will likely continue to stay afloat after nearly 40 years of packing up some of the best patties you'll find in Toronto, and the scent of barbecued jerk wafting from the drums at Rap's and Spence's Bakery might continue to entice pedestrians when they fire up daily at 6 p.m.

Judy's Island maintains its status as a favourite for curry goat, and the killer ackee and saltfish from Entertainment Kitchen's bar is supplemented by the fact they throw proper yaad parties reminiscent of home. 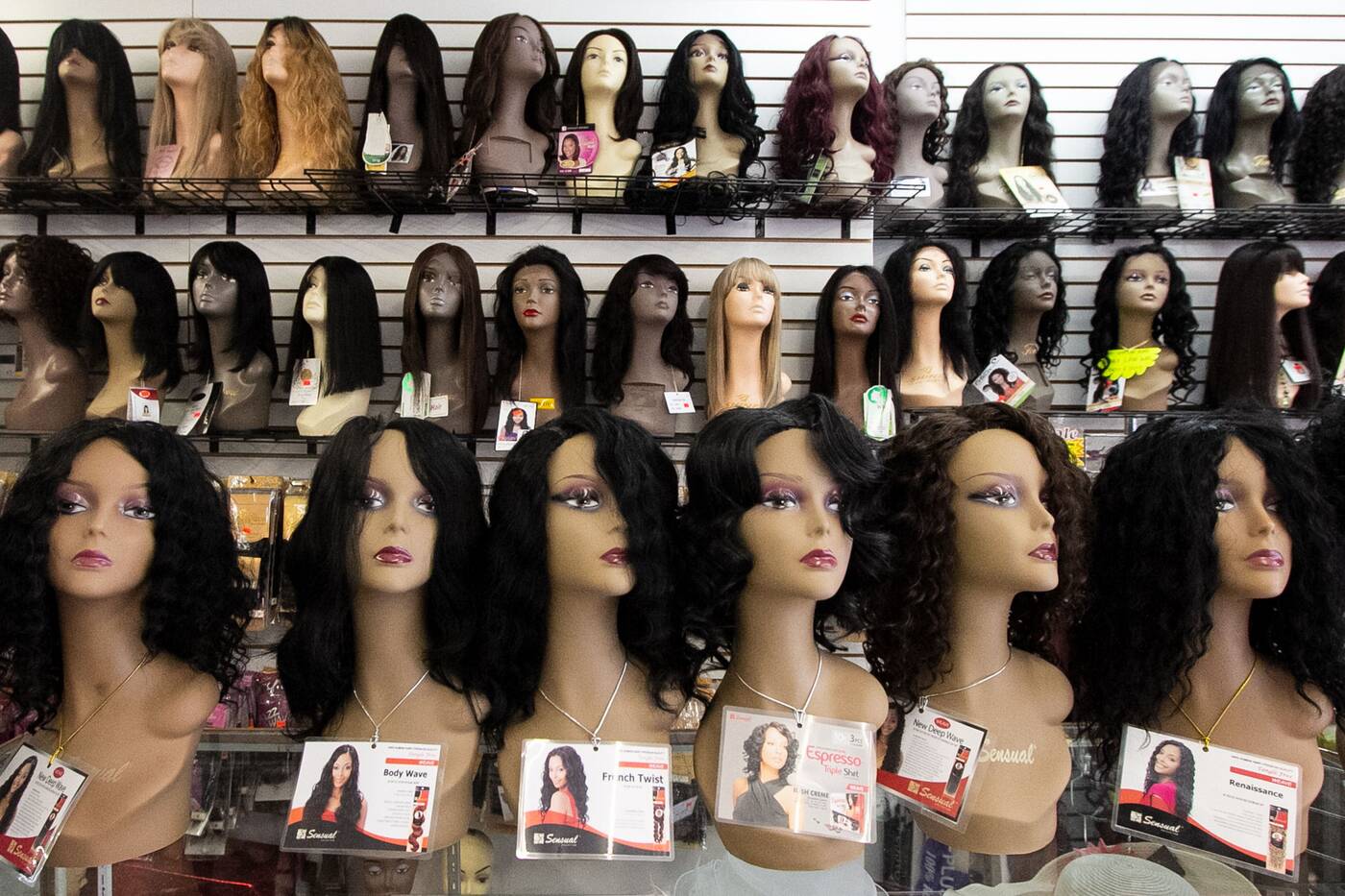 Just Incredible Hair has been selling hair products since 1990.

But other stores like beauty mainstays Monica's Beauty Salon (which has been open for decades) and Just Incredible Hair (since 1990) are barely getting by. 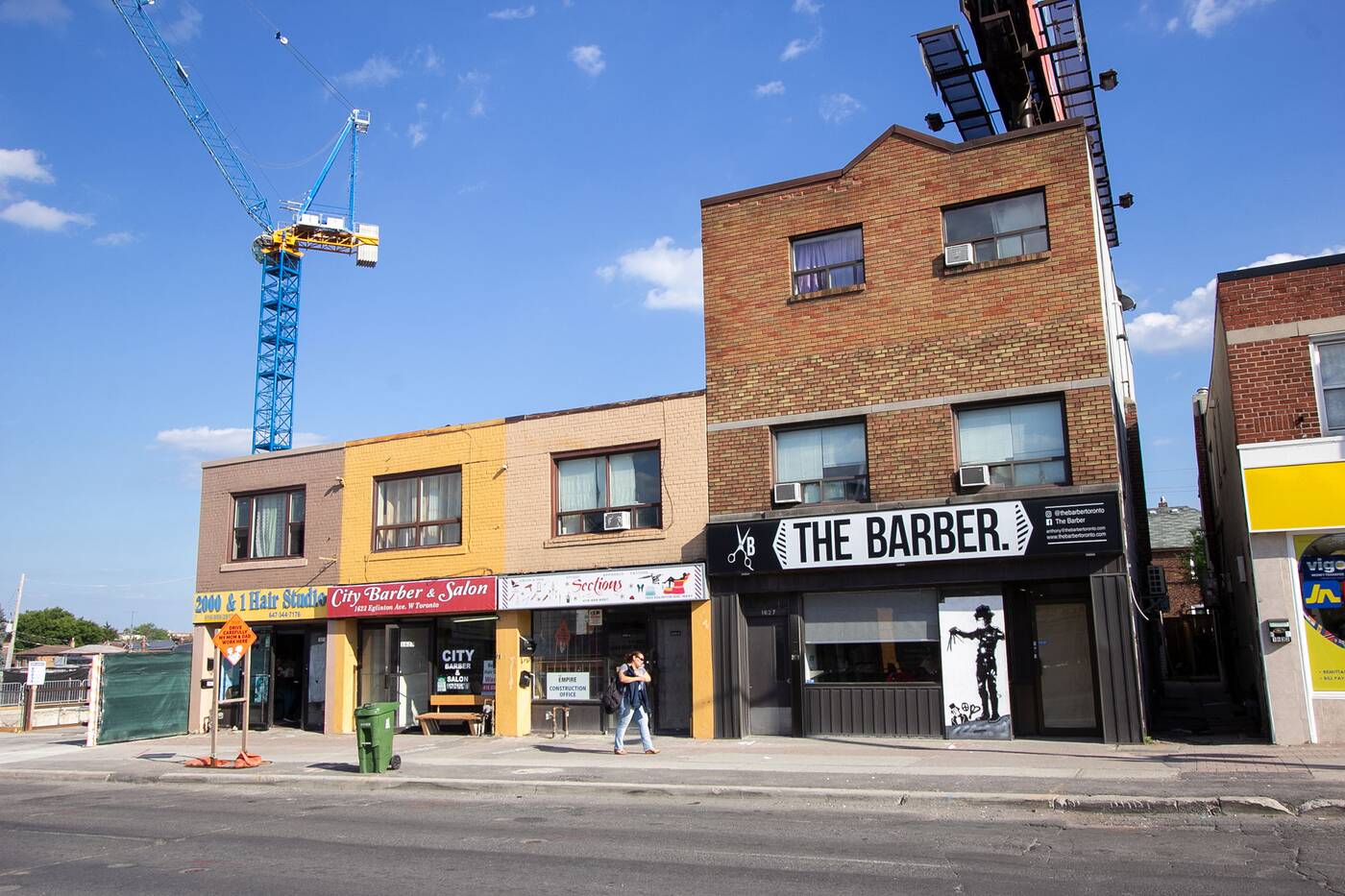 This stretch on Eglinton has a fair share of barber shops.

With items like wigs and gels for Black hair failing to entice a local demographic that's quickly changing, these stores and the handful of barber shops like The Barbers of Eglinton are mostly running off of community connections alone.

On top of all this, it's been argued the most significant casualty of gentrification in the area has been Little Jamaica's reggae and Rasta scene. 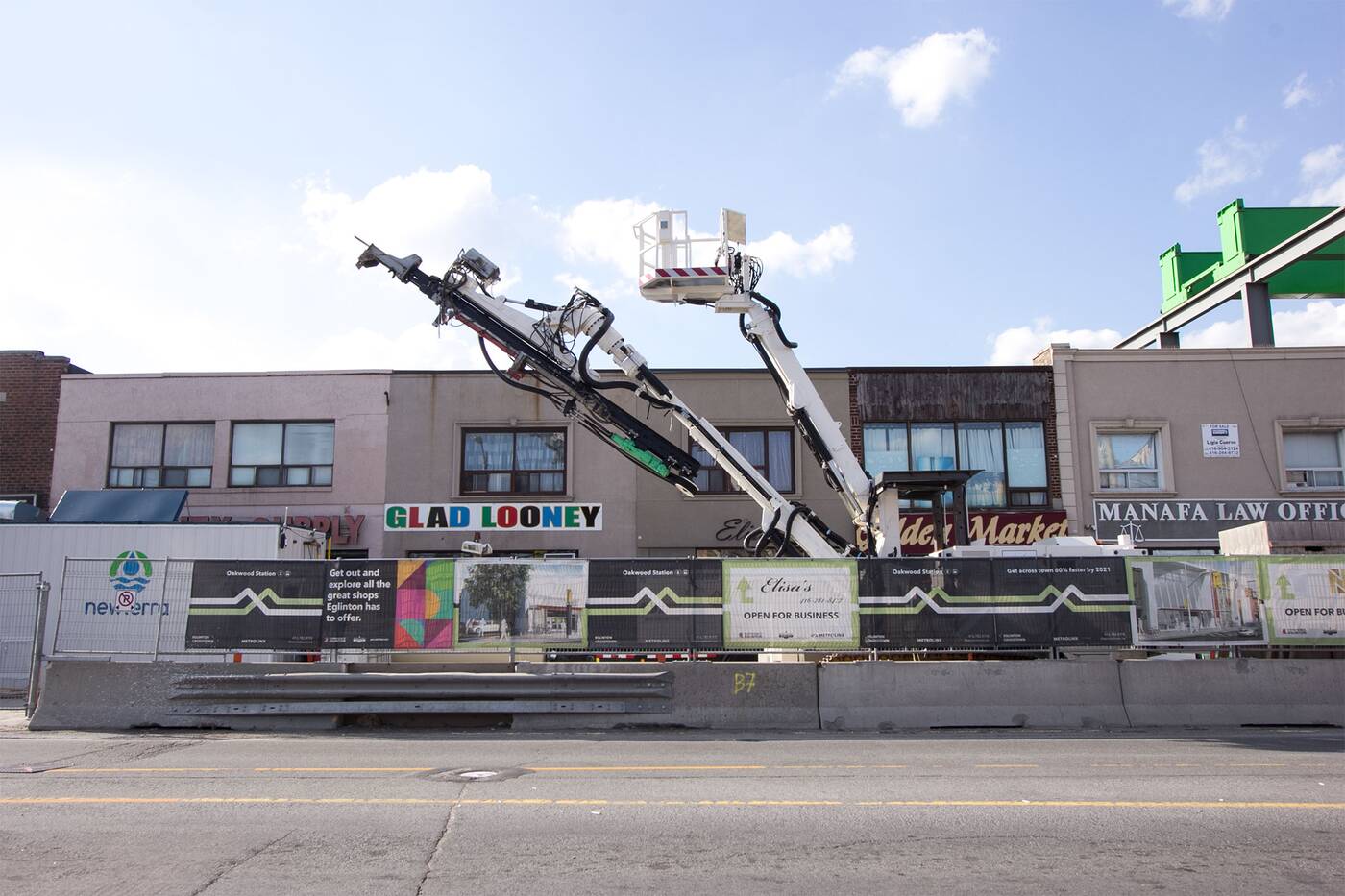 Entire sections of Little Jamaica have been walled off by concrete blockades.

Once an area where the likes of Dennis Brown and Gregory Isaac would visit to promote 45s and LPs with flyers, this strip of mostly Jamaican-owned businesses has been broken up and cordoned off by concrete blockades which have visibly crippled a number of stores.

Natty B's TreaJah Isle is one of the last bastions for the reggae community in Toronto, but even still, the quarter-century old store sells reggae vinyls while acting as a recording studio, juice bar, and Rasta accessories shop to keep up with rent. 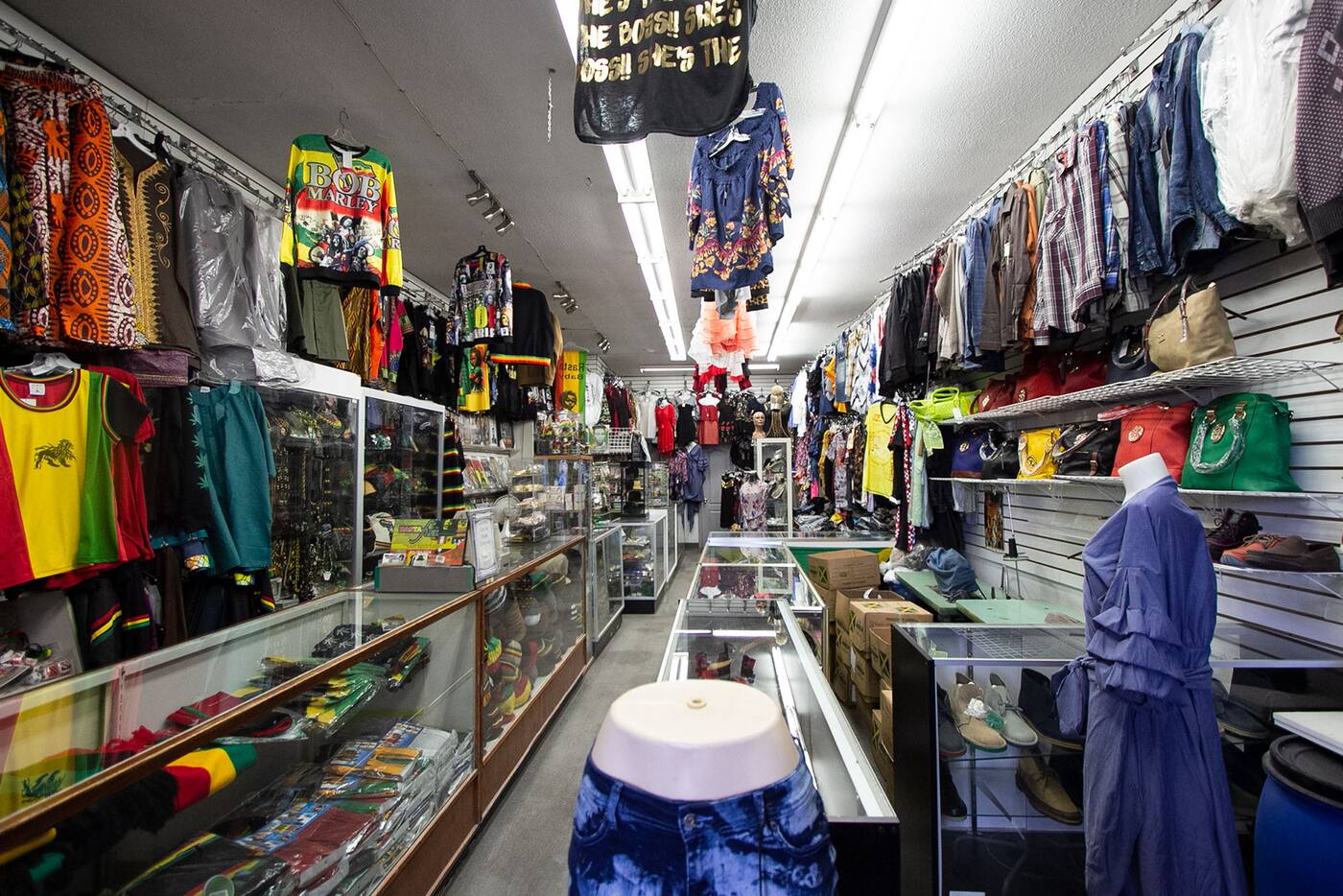 Rasta Flex is one of many stores negatively impacted by the LRT construction.

Wrapping up mangos in paper and discarding the bruised ones, Michael has just started selling fruit on Eglinton, mostly on Fridays and Saturdays to make ends meet. 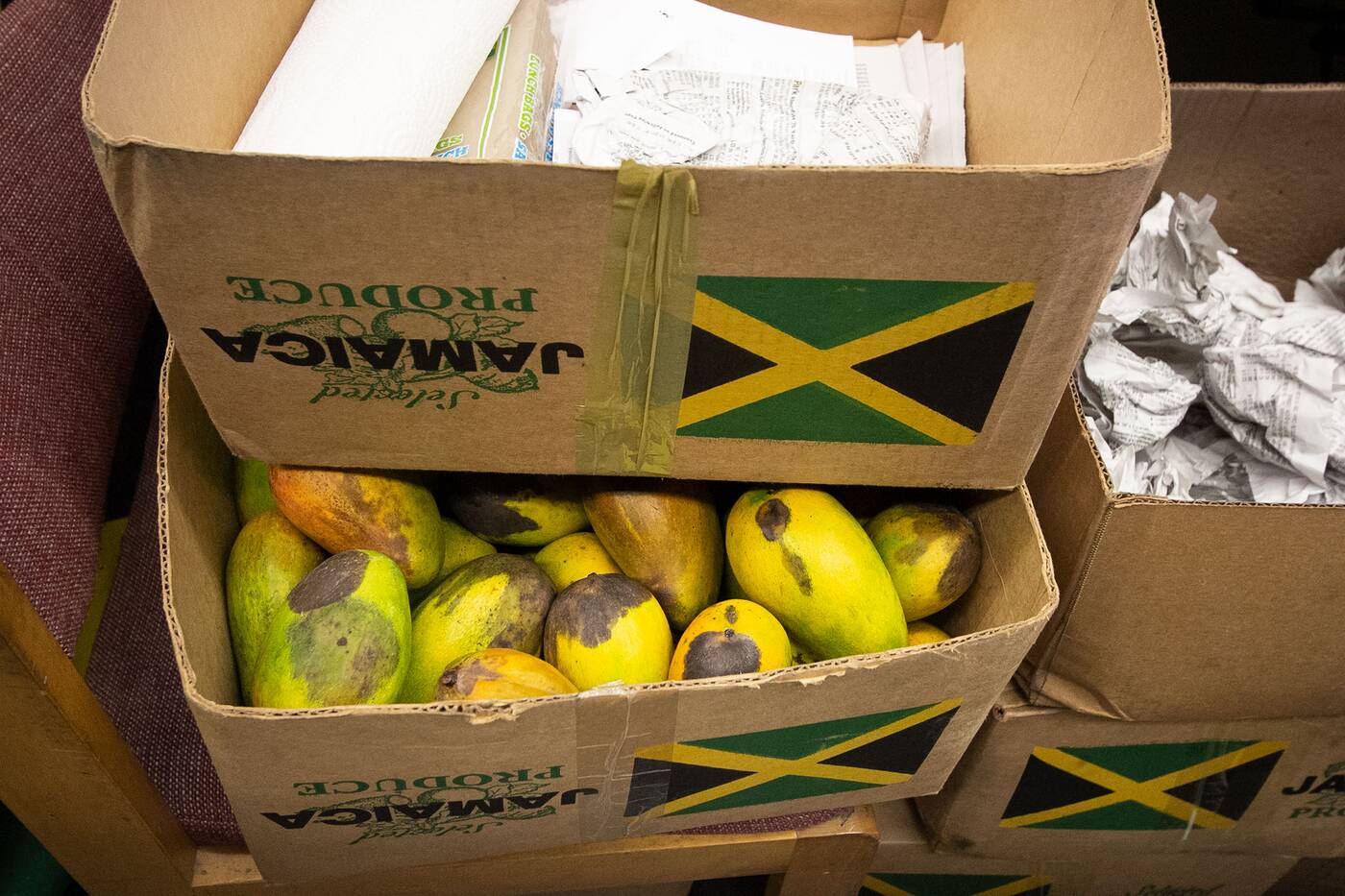 The shopkeeper at Rasta Flex has taken up selling mangos on weekends to make ends meet.

"I don't know what will become of the Jamaican people here, most people have run away."

"[We] can barely pay our rent, they should know that," he says, referring to the developers responsible for the gates which have all but completely concealed Rasta Flex from plain view.

"There's no parking, if [customers] come here they get a ticket." 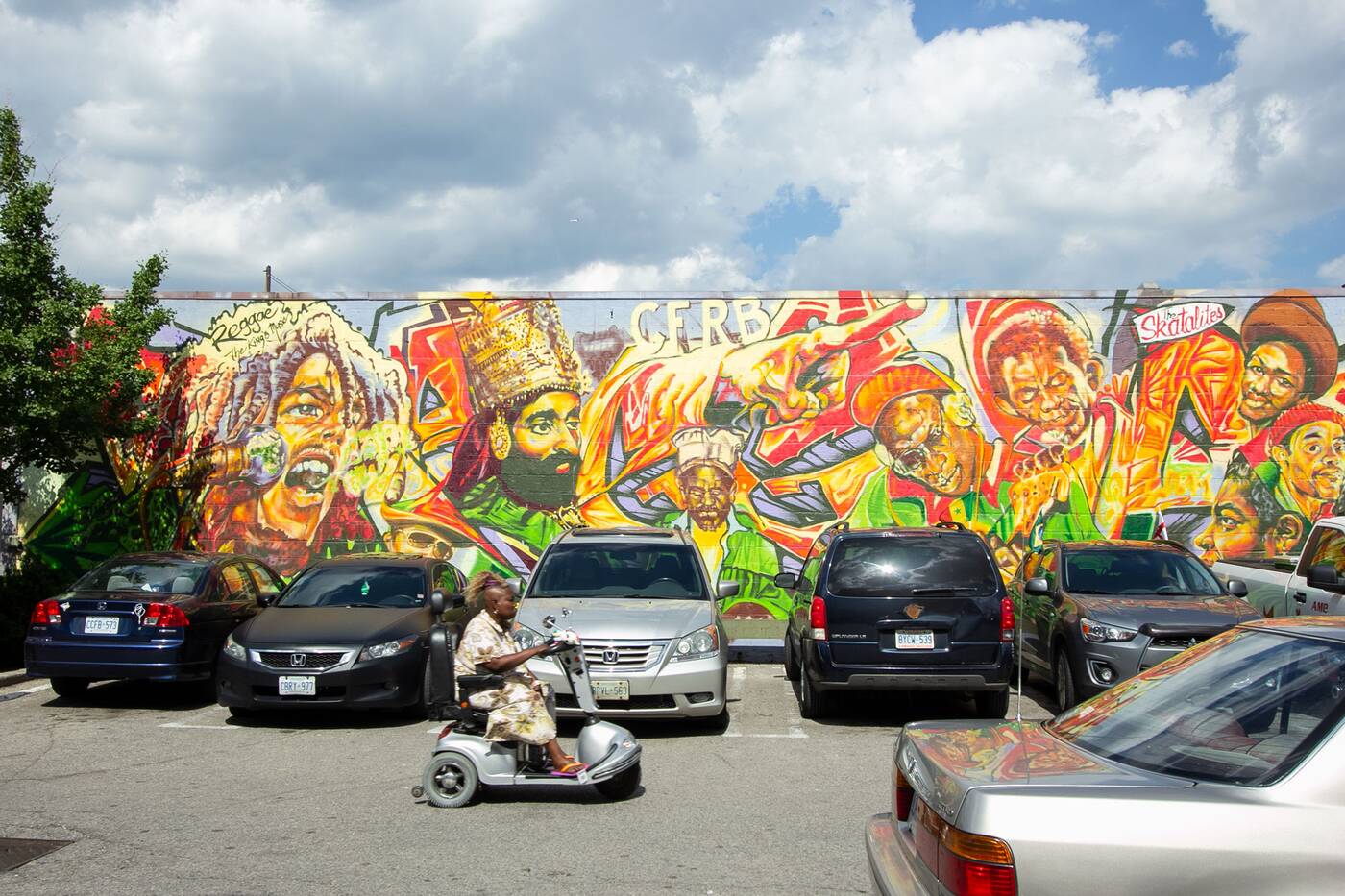 The Reggae Lane mural was unveiled in 2015.

These days, the only way to dodge a fine in Little Jamaica is to either park on a residential street or at the 1529 Eglinton Green P, where you'll find the faces of Bob and Haile alongside local legends like Pluggy and Bernie Pitters leading into Reggae Lane.

Designated in 2015, this small street running behind the main drag of Little Jamaica was designated Reggae Lane as part of the city's Laneway Project. It was the first and only move by the City of Toronto to solidify the area as the significant ethnic enclave that it is today.

But most community members seem to agree that the naming of Reggae Lane, while a nice idea, fell short on its promise to promote the neighbourhood. 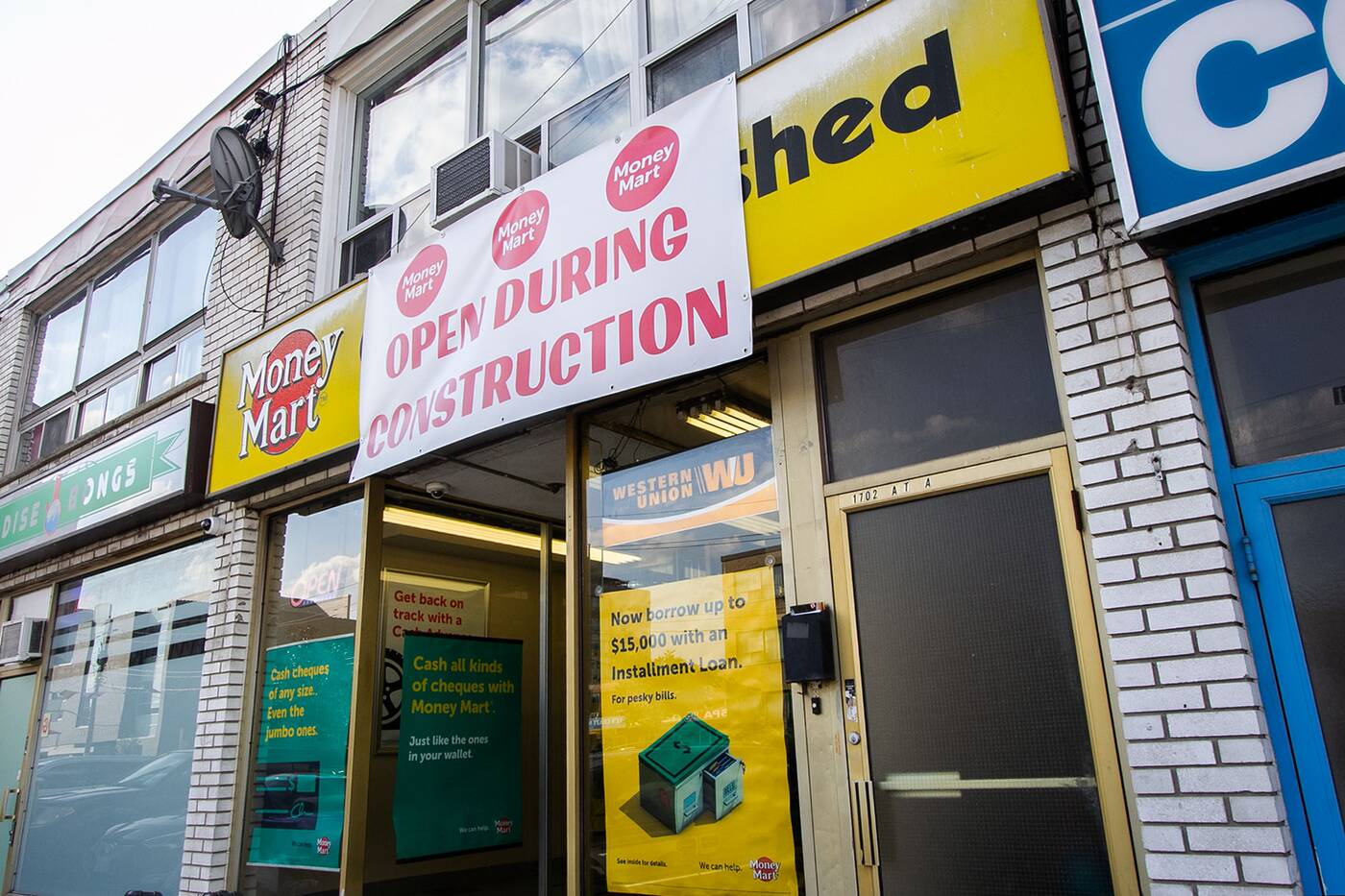 The construction in the area has impacted businesses all along the Eglinton stretch.

Founder of the online reggae platform Canadian Reggae World Julian King calls Reggae Lane an act of "tokenism" – a gesture to placate the community without giving it real legs to stand on.

"I still think Reggae Lane is a beautiful entity," he says. "But the city needs to invest in the businesses that are still here." 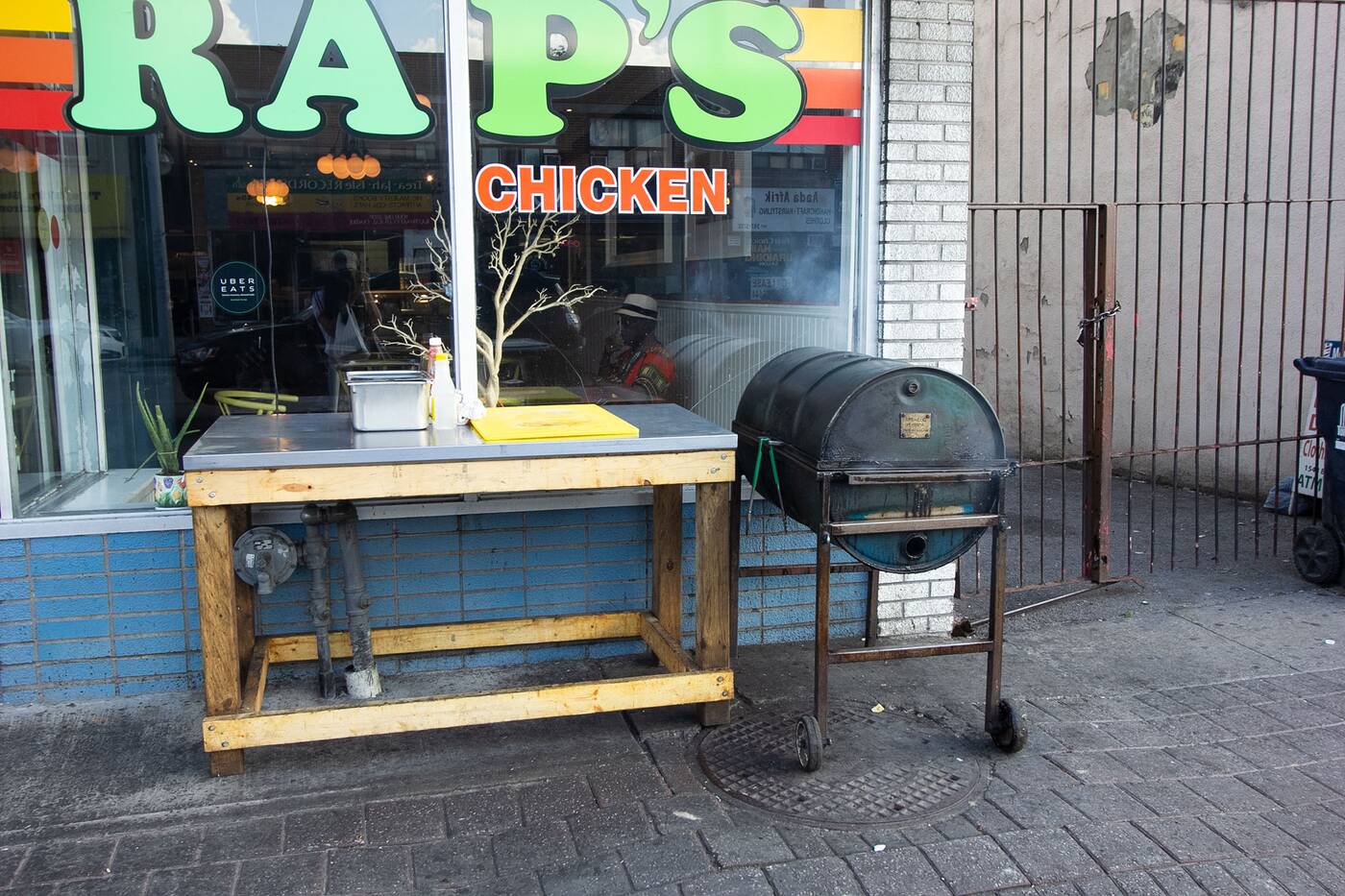 The oil drum at Rap's has long been a staple in Little Jamaica.

King says that while endeavours like Toronto Symphony Orchestra's Canada Mosaic program (dedicated to "Canada's diverse musical landscape") receive federal funding ($7.5 millions-worth), the reggae scene – with a long and rich history in Toronto – gets nothing.

And though the mural by artist Adrian Hayles is monumental in its own right, Reggae Lane itself is no destination. There are no back patios along this stretch, no musical events or guest reggae performances held in the lot, just empty bottles, trash, and illicit activity.

"You have a gold mine in front of you," says King. "When Reggae Lane is treated correctly, it will become a true tourist attraction." 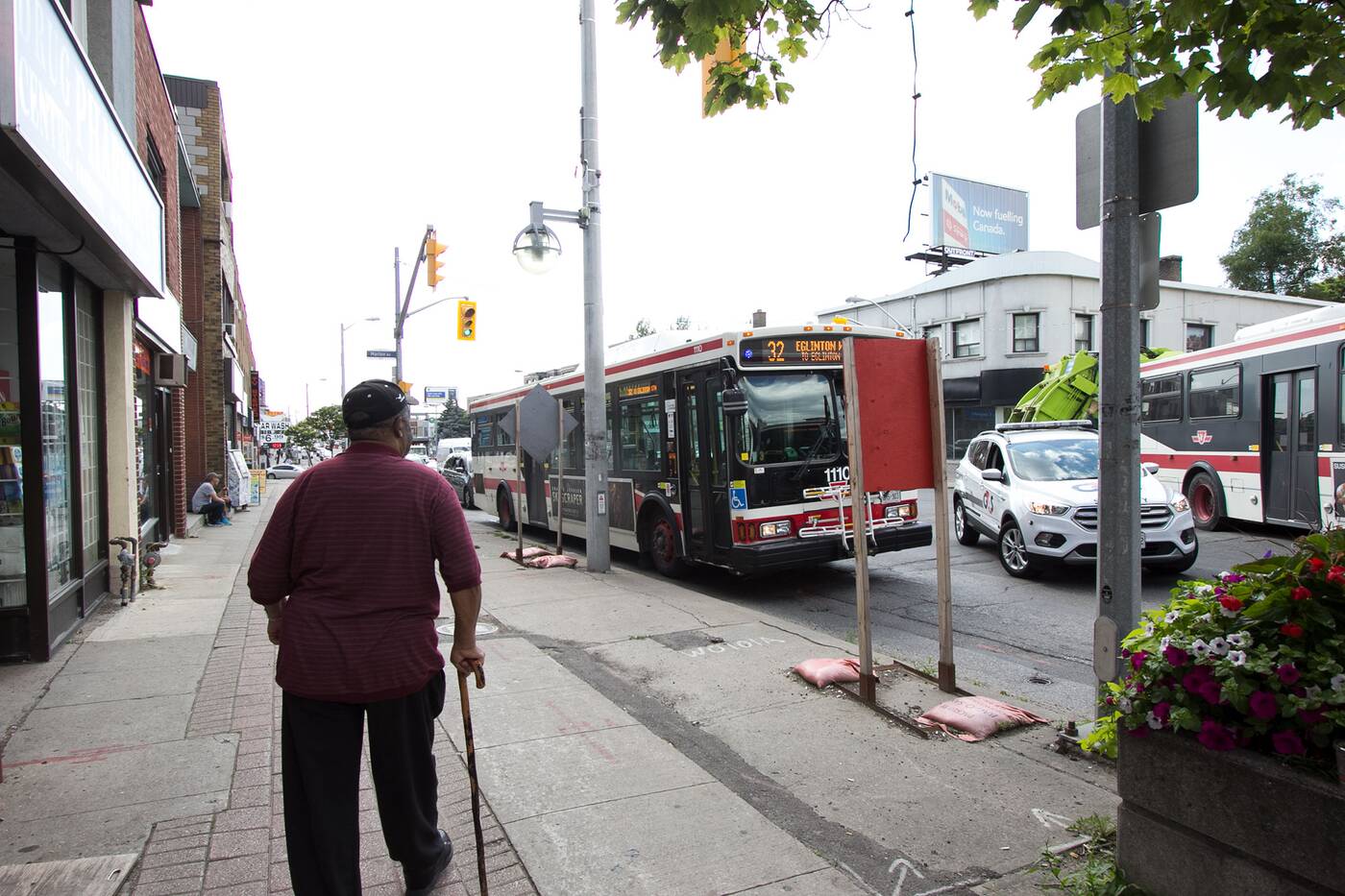 Walking around Eglinton, it's clear to see that Little Jamaica is fighting the good fight. With all the abandoned storefronts, there's only hope that maybe the city will eventually manage to scrounge up the funding to bolster the area.

But even if they do, it'll likely be after the condos go up, the subway is complete, and the original businesses which have stood there for decades have come down. Oakwood Station will service a whole other community, and Reggae Lane will still just be a mural on the wall. 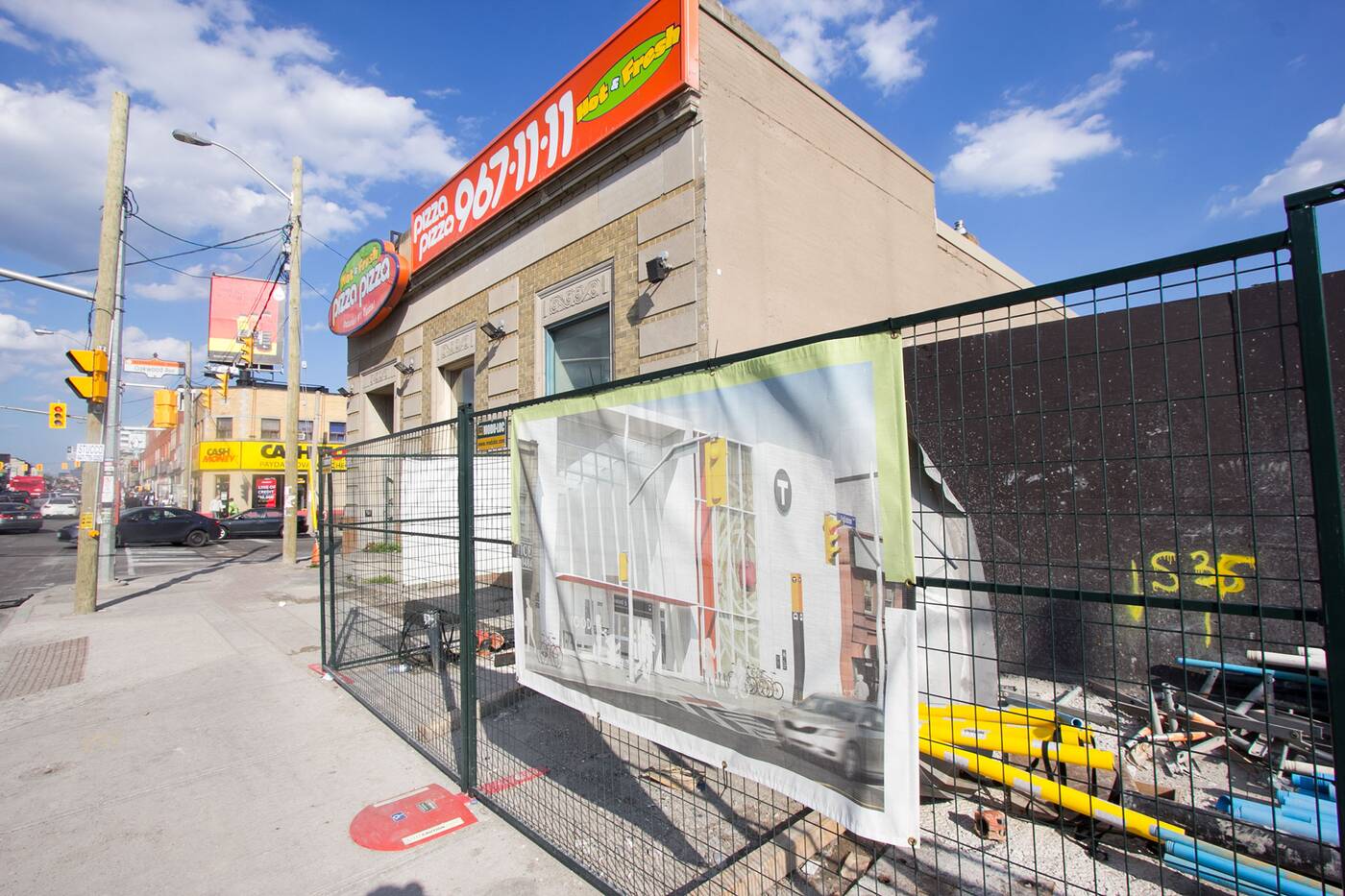