Winter weather had taken a hold of Toronto as it recovers from a weekend of heavy winds and chunks of ice that managed to cause widespread power outages, damages and just pure gloominess.

A special weather statement issued for southern Ontario predicted Toronto would get a coating of ice up to 20mm thick and winds reaching 60/km per hour.

The waves at Spencer Smith Park are as big as I’ve ever seen them. Just wow. Fall in here and you will not survive. @weathernetwork @georgekourounis #onstorm pic.twitter.com/vmSiELPqrr

The prediction turned out to be true as Toronto Hydro reported as many as 44,000 households experienced power outages across the GTA over the weekend.

Power restoration progress is being made. Approximately 23,000 customers remain without power, down from 44,000. All available resources are mobilized and our crews continue to work as quickly and safely as possible. Thank you for your ongoing patience. #ONstorm

Trees proved to be a big culprit with many sending loose branches whirling about or becoming downed entirely in the mix.

It didn't help that Hydro poles themselves took a beating as well, both in Toronto and beyond the city's borders.

The #ONstorm continues to rage on and cause significant damage like these broken poles near Dundas, ON. Crews worked throughout the night and they’re back at it again this morning to restore power to over 66,000 customers. Visit our map for updates: https://t.co/q5Wq0lSjWT pic.twitter.com/vx4LP01mTs

Not surprisingly, getting around became hazardous throughout the city and the TTC experienced delays due to road and track conditions.

RIGHT NOW: Heavy Traffic at Dufferin and Davenport. Buses can’t get up the hill because of the slick roads. Commuters have to find other ways around. If possible, try to avoid this area. #CityStorm #ONstorm #icestorm pic.twitter.com/JYfAC1yYAi

Cars were not spared either, with some reporting that their vehicle had got caught in the crossfire of the storm. 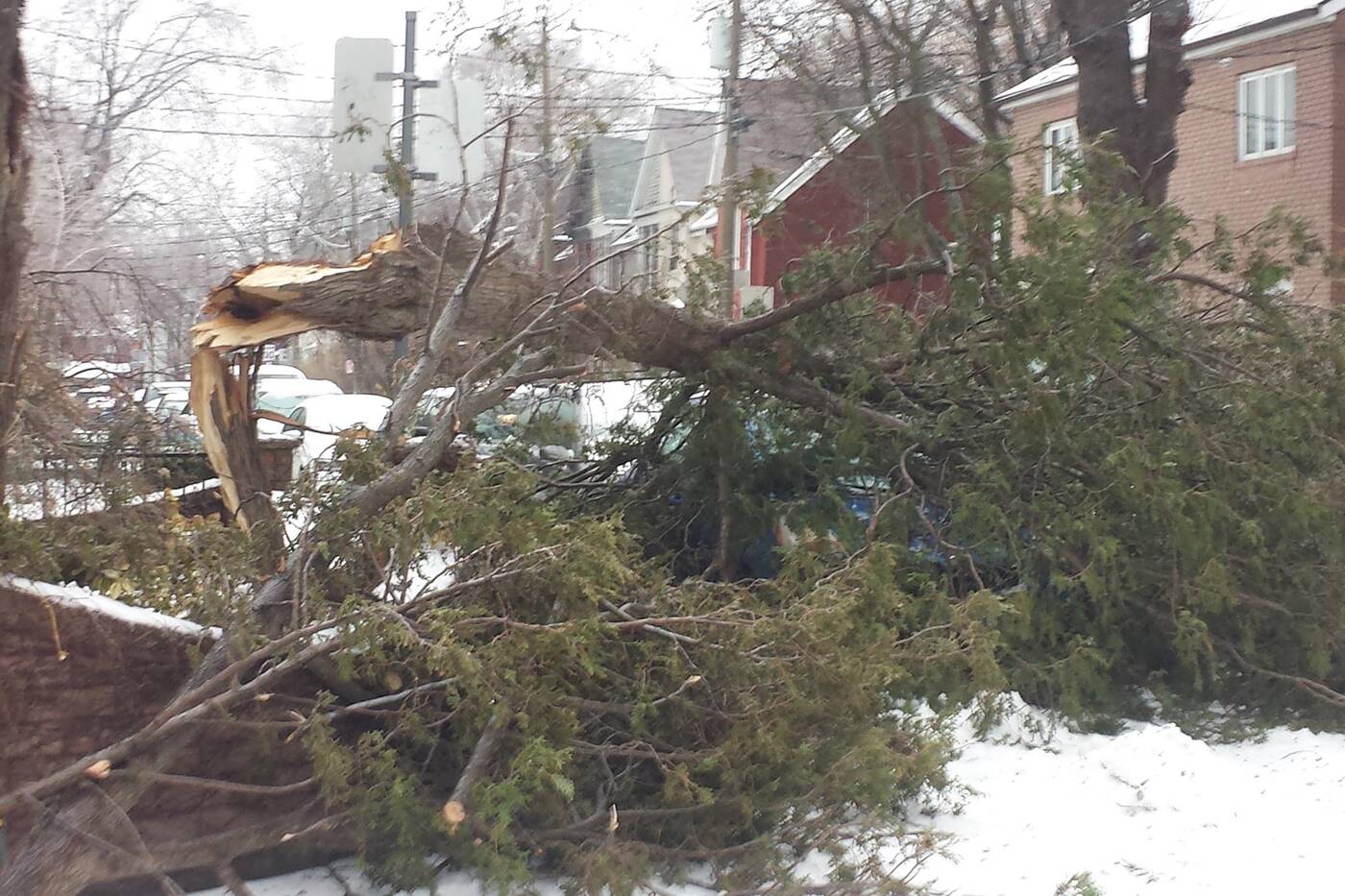 A car crushed under a tree at Lisgar Street and Afton Avenue in Little Portugal. Photo courtesy of Jim MacDonald.

Traffic on the major highways proved to be a nightmare as well, with hundreds of reported collisions.

#OPP have been called to over 400 crashes in the #GTA and surrounding area today.
If you dont have to drive, stay home! #OnStorm pic.twitter.com/qDrcxhL77q

One spunky pup narrowly missed a tree falling while out for his daily frolic.

This video of a dog narrowly escaping a falling tree during yesterday's #Toronto storm is unreal https://t.co/pIZJdyvKLU pic.twitter.com/WGYqulkhsy

Some in Ontario, on the other hand, got into the spirit of it all. Cause why not? It's Canada.

Spotted in Port Elgin today. No storm is gonna stop this guy from getting to the Beer Store. #onstorm (photo by Samuel Clemens) pic.twitter.com/QjHctRTlnP

This morning brought a messy TTC commute and additional concern over flooding.