Toronto's most important streets could get a total makeover

Toronto is in the midst of an unprecedented growth spurt that shows no signs of slowing down anytime soon.

The number of people living in the downtown core will almost double within that same period, according to the report, going from 240,000 to approximately 475,000 residents over the next 24 years. 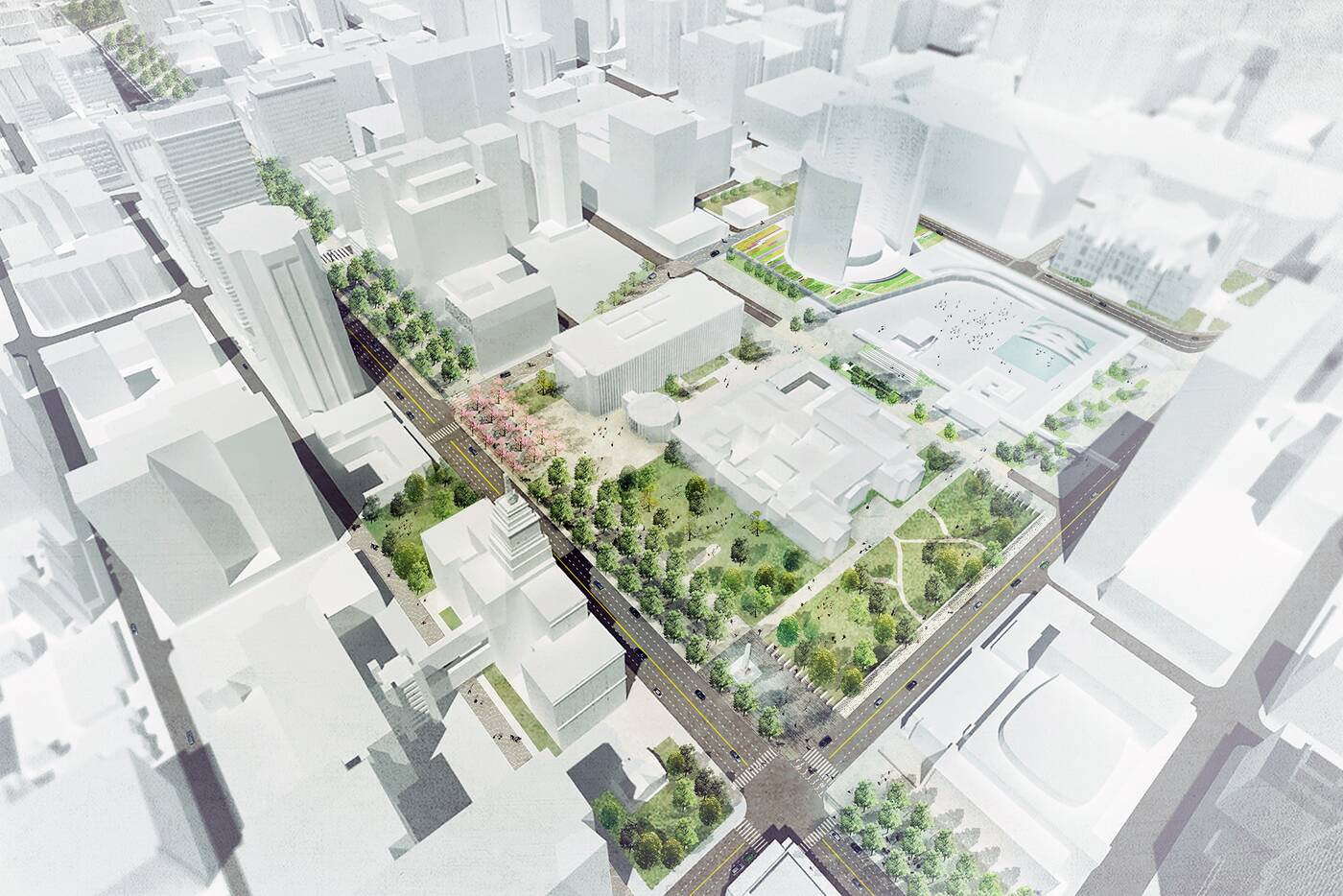 How University Avenue could eventually be laid out as city planners work to accommodate Toronto's growing population in the next 25 years. Image by PUBLIC WORK, for TOcore Parks and Public Realm Plan.

In an effort to prevent the chaos before it starts (or gets any worse, I guess,) The City of Toronto has embarked upon a comprehensive, interdivisional study called TOCore that looks at how we can best plan ahead for the next 25 years of life downtown.

One key project under the TOCore umbrella is a complete re-imagining of 12 "great streets" in Toronto to improve how they serve and connect our city.

Imagine our downtown with a network of Great Streets that anchor retail, tourism, and our experience of the city in every day life. #TOcore pic.twitter.com/YAkl0hgNy2

"I'm particularly excited about this idea," says Lorna Day, Director of Urban Design in Toronto's City Planning department. "Streets are part of our image, who we are. Each are unique and work together to make the city what it is."

University Ave is the first great street we're seeing potential plans for this week thanks to a series of renderings released by the city.

Day cautions that the city is still "at a very aspirational stage" in the process of redesigning the busy downtown street, but that there is significant opportunity to make what's there now work harder for Torontonians.

"Each generation has kind of stopped to re-imagine 'what is University Avenue for us?'" she continues. "It looked different in the 1890s, the 1900s, the 1960s… this is our chance to re-imagine it."

So far, the vision includes moving all lanes of traffic to the west side of the grand boulevard and opening up park space to the east. 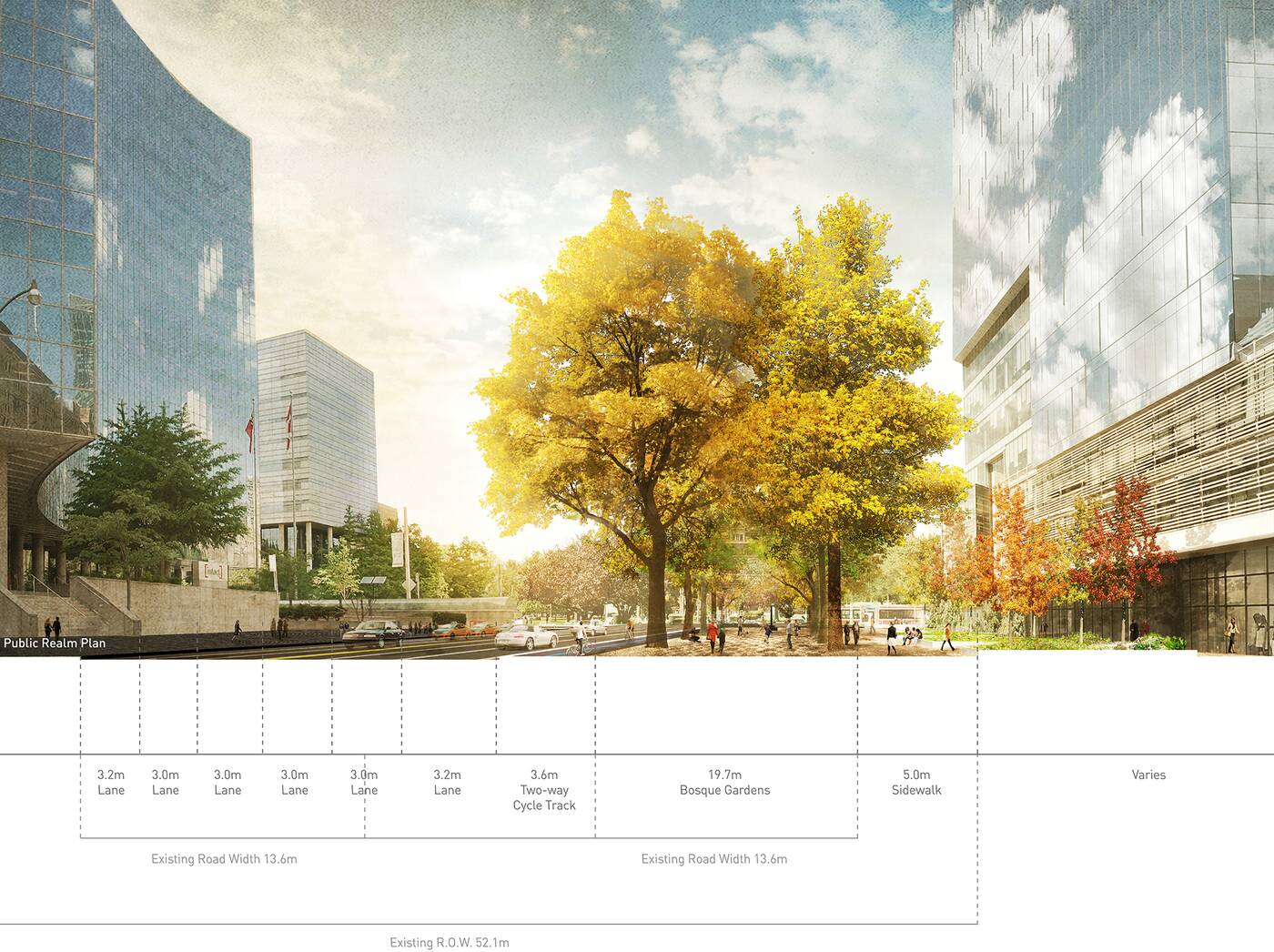 Currently, about three acres of green space runs through the middle of University in the form of medians between Queen and College Streets.

Those medians are actually a city park, Day tells me – one of the least utilized parks in the city despite its beauty and abundance of historical monuments.

"What if we could take that parkland, push it to one side of the street and start to connect it with the landscaped space and setbacks that are already there?" says Day.

According to the TOCore project, about 7.7 acres of potential mixed use public space would be created if University's medians were extended to meet its eastern boulevards, sidewalks and setbacks.

"It starts to become something that’s greater than the sum of its parts," says Day. "Part of the idea of making a good park is making a people move efficiently, but also actually wanting to linger and stay."

The #TOcore Parks & Public Realm Plan includes this incredible vision for transforming University Ave by moving the public space to one side pic.twitter.com/tcez2QGTUY

There is, of course, the issue of traffic to work through.

The number of lanes for vehicles on University Ave. would decrease if the plan is implemented as it's currently designed – but nobody is trying to block off access to the hospitals and legislature.

"This is not a proposal to limit lanes," says Day, noting that traffic flow is important and needs to be studied very carefully. "It's a diagrammatic idea – a principled idea about adding parkland.

Torontonians will have a chance to view the renderings, learn more and weigh in on these plans at a public meeting scheduled for Dec. 2 (check the website for more details).