The end could be near for Toronto's bizarre cube house

The cluster of three green cubes found at 1 Sumach St., might be Toronto's most interesting home. Based on Dutch architect Piet Blom's complex of Cubic Houses in Rotterdam, the UniTri structure dates back to 1996 and has long been a source of local architectural intrigue.

How long the cubes continue to bemuse drivers heading to and from the Don Valley Parkway is, however, now up in the air. 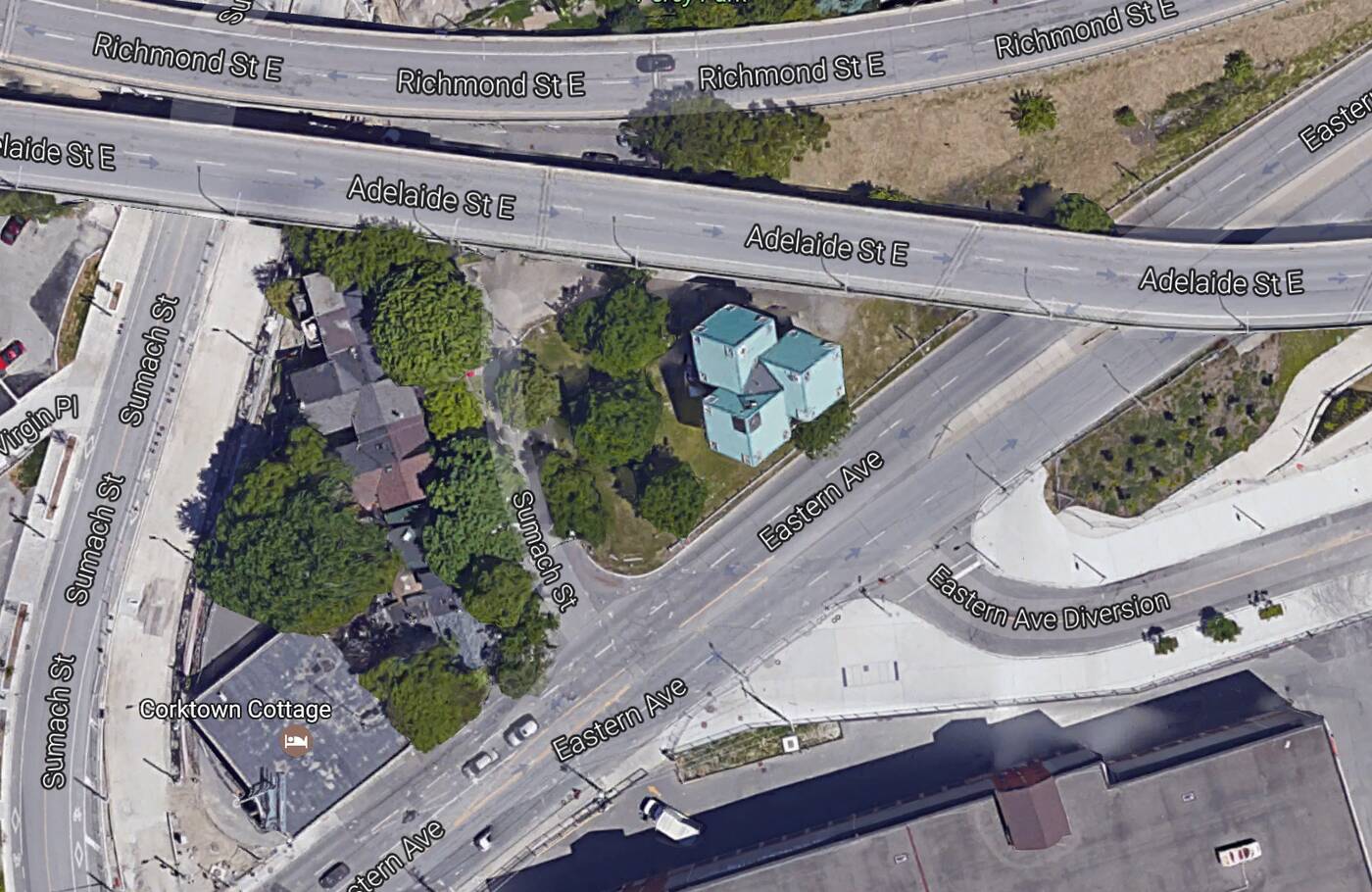 Aerial view of the wedge-shaped property on which Toronto's cube house sits. Image via Google.

A for sale sign was place outside the wedge-shaped property at Sumach Street and Eastern Avenue last fall. It has remained there ever since, but you won't find the property on the MLS because it's an exclusive listing, something that hints at its unique status, according to the realtor.

"It's a landmark building," explains Arthur Crapopoulos, one of two agents listed on the sign outside the cube house. "The owner's in no rush to move it, but would if the right deal was found." 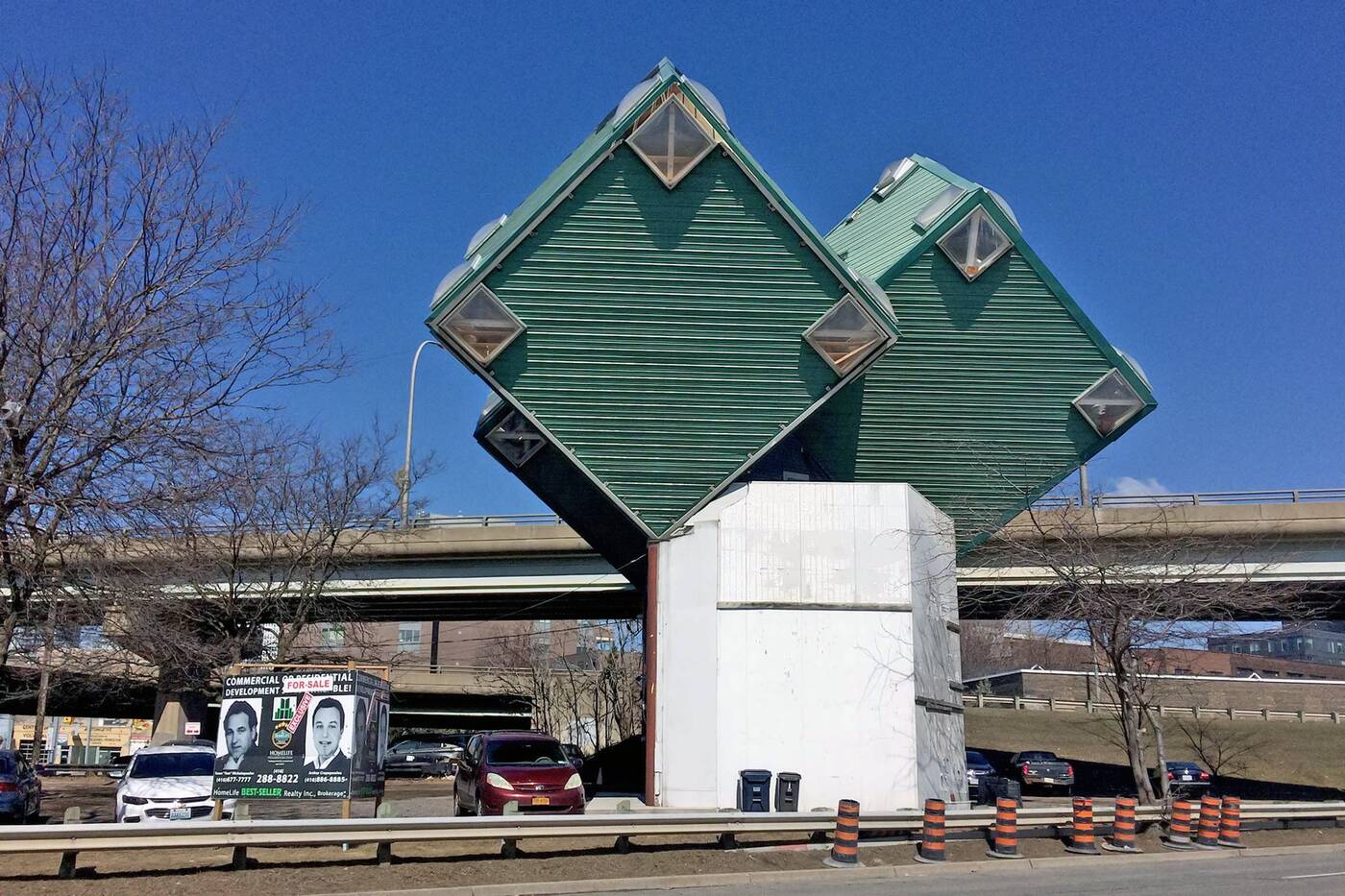 The owner in question is the other name on the sign out front, Tom Michalopoulos, who founded the Coffee Time chain. He purchased the cubes back in the early 2000s amidst a lengthy legal battle between the original landowner and their Canadian designer, Ben Kutner.

When Kutner and partner Jeff Brown installed the cubes at 1 Sumach, they didn't own the property. In response to the owner's decision to sell the land a few years later, Kutner argued that the cubes were chattel and could thus be moved from the site.

According to a 2011 article in the Globe and Mail, he ultimately lost that legal battle, which left the cubes squarely in the hands of Michalopoulos. Following his purchase of the cubes, Michalopoulos spruced them up for occupancy and adorned them with Coffee Time banners.

While the banners were ultimately removed, the tenant who took residence in the cubes is still there after all this time. Martin Trainor has called the novel complex home for 15 years, and has gradually become an advocate for the preservation of the structure. 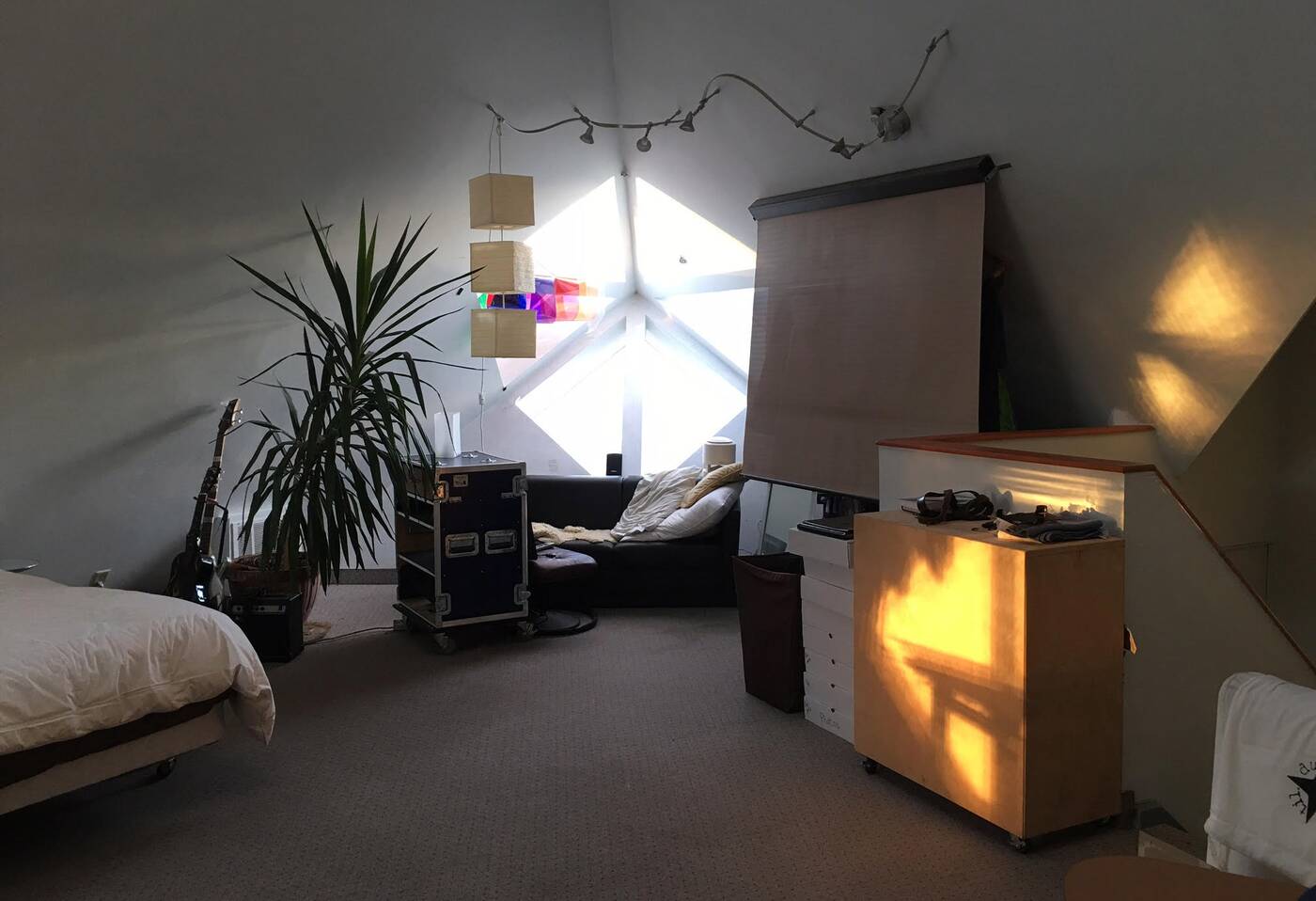 Interior of the cube house. Despite sloped walls, there's tons of room. Photo by Martin Trainor.

"Living in the cubes, you get a sense for how special they are. The negative space is enormous, but they're also more practical than you'd think," Trainor explained during an impromptu tour he gave me last week.

Measuring 42 feet by 42 feet, the cubes are divided into multiple levels, which are far more spacious than you'd guess having only peeked at them while driving by. Despite what looks like only a few windows, they're filled with natural light that Trainor's many plants soak up. 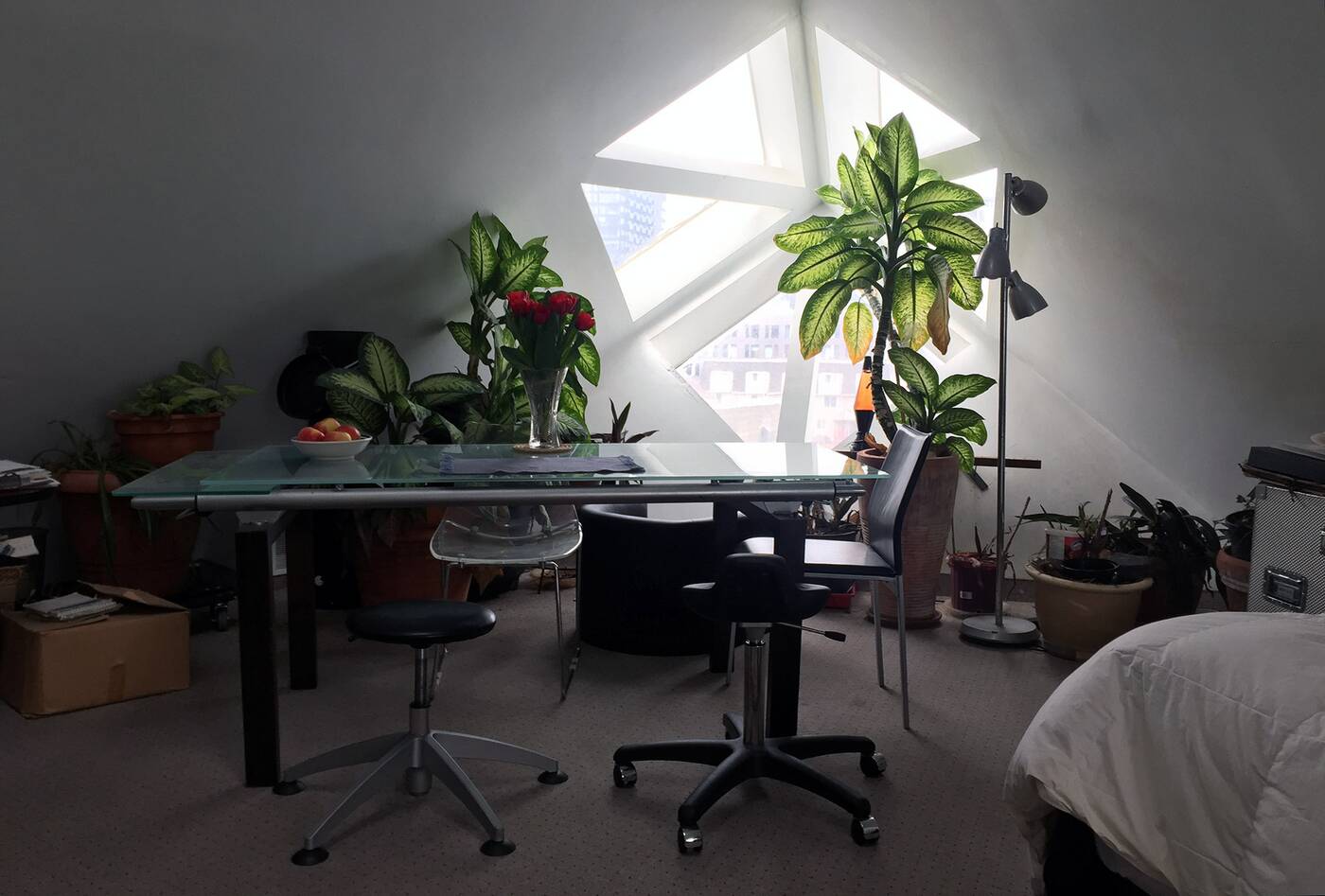 The CBC video producer isn't just an advocate of maintaining the three cubes that were built here, but believes that the site could actually thrive with the seven that were initially planned by Kutner and Brown.

"If there was a Save the Cubes campaign, I'd be front row and centre," Trainor tells me.

Even before the for sale signs went up, he started imagining possible new locations for the unique structure after his outdoor garden was bulldozed to create a temporary parking lot for the Pan Am Games in 2015.

"I've spoken with the Brick Works people about what their interest might be like, because I think they would work there, but it's all completely preliminary."

The problem is, of course, he doesn't own the property â so ultimately, he has little power over the fate of the cubes. Even if they can be moved, which seems to be the case, any future buyer will have the right to decide what to do with them. 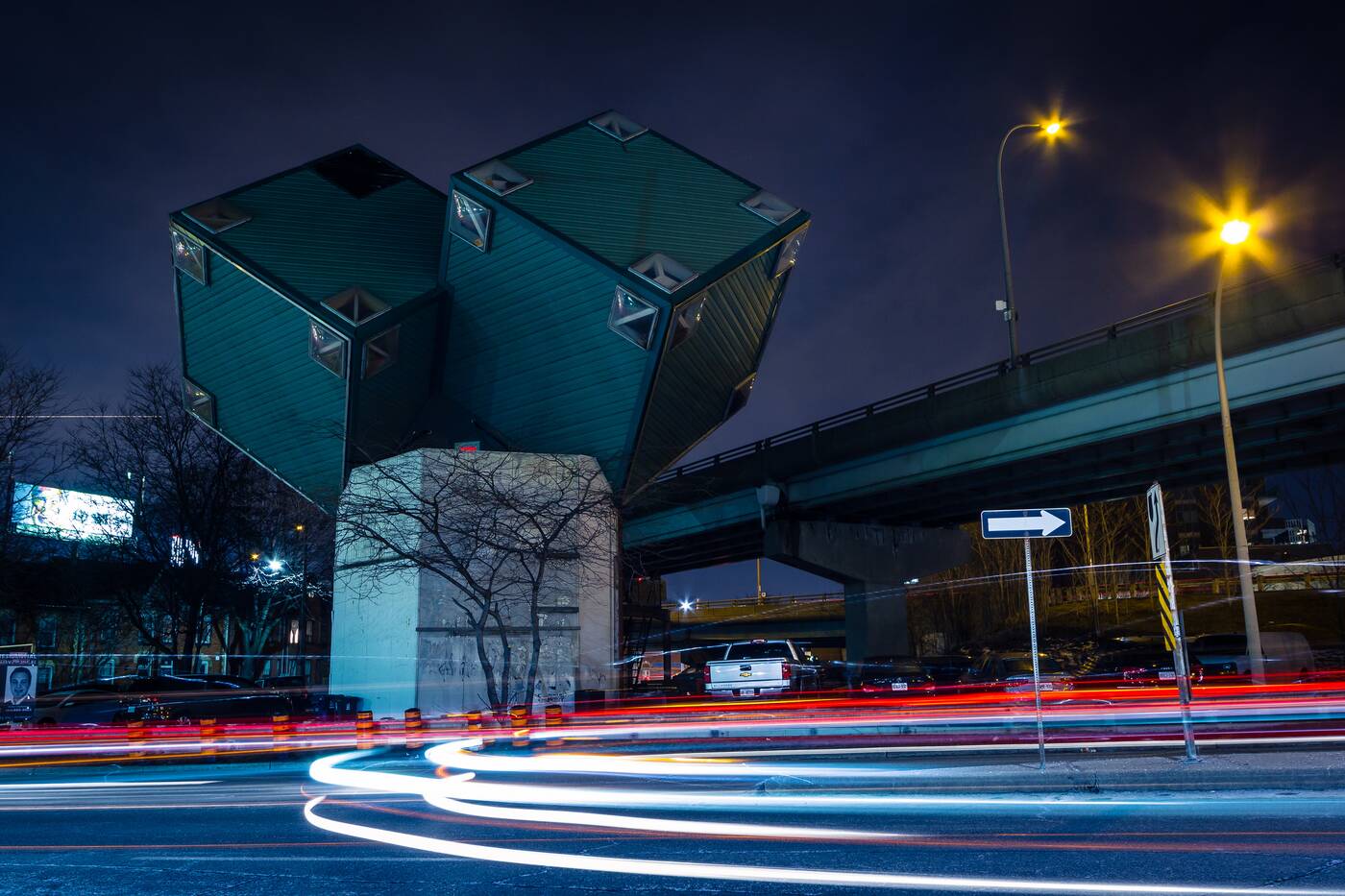 The cube house at night. Photo by Ben Lean.

While an iconic part of Toronto's architectural legacy, at just over 20 years old, the structure is likely too young to be considered for heritage protection. With no plans on the books for major renovation or additions to the site, for now the cubes remain in limbo.

"Should a potential deal be reached in the sale of 1 Sumach, the existing cube structure will be sold along with the property to the prospective buyer(s) in its current state," Crapopoulos confirms.

A future buyer could deem them valuable and keep them on the site, an arrangement could be made to move them, or they could be torn down.

The latter is a particularly troubling thought for fans of modern architecture, but it's worth recalling how much land values have climbed in the area since Michalopoulos bought the property.

Once designed as an affordable housing alternative, can the cube home survive the condo boom?

For now we wait for an answer.