An essential guide to all things kitsch in Toronto

Toronto doesn't have as much kitsch as it once did, but those looking for a dose of sentimentality rooted in tacky design can still seek it out at a few places across the city. A notoriously difficult word to define, kitsch can be identified based on a certain nostalgic feeling it inspires. Kitschy things are fun and easy in the same way that we imagine our childhoods were.

Here's were to seek out kitsch in Toronto.

Honest Ed's is Toronto's palace of kitsch, from the blazing 23,000 light bulbs that illuminate its exterior sign to the bins of "fancy panties" and Elvis busts. Soak it up while you can, as the store is closing for good at the end of the year.

The loss of the Sam the Record Man sign was a hit for kitsch lovers in Toronto, but there's still a few examples of garish neon to gawk at in this city. The strip clubs still take the cake in this regard, with Filmores and Zanzibar at the top of the list, though I'd be remiss not to mention places like the El Mocambo and The Goof.

As far as smaller buildings go, the ultimate destination has to be the so-called doll house on Bertmount St. in Leslieville. This is kitsch in a nutshell. It's outlandish and tacky, but also fun - and you always wonder if the home owner realizes how gaudy it is.

Other places worth driving by include the House of Parashos on Shaw St., the elephant house on Yarmouth Rd., and the wood cake house on Clinton St.

The motel strip on Kingston Rd. is more sad than it is outlandish these days, but the Hav A Nap and Avon still hint at the quirky mid century design principles that once made these places shimmering roadside beacons that promised rest and relaxation. 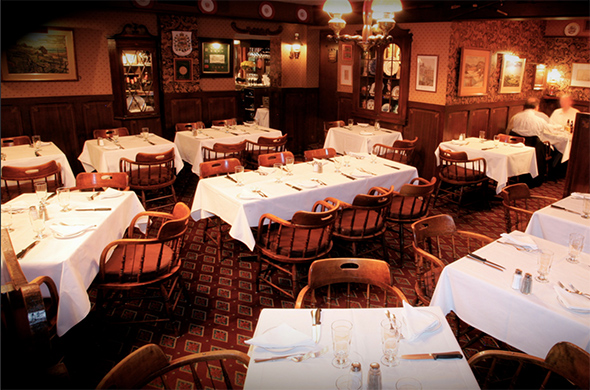 If you really want to soak up some kitsch in Toronto, having dinner at a few restaurants scattered around the city is one of your best bets. Barberian's Steakhouse has one of the kitschiest rooms in Toronto, seemingly unchanged since it opened in 1959. From the cheesy oil paintings to the tacky wallpaper, it's heaven if you're into this sort of thing.

If forced to choose, however, I would have to pick The Steak Pit as the pinnacle of kitschy dining in Toronto. At Barberian's you can tell that they're playing it up, which gives the place a bit of a touristy vibe, but the neon-adorned Steak Pit is a true throwback, right down to the homemade Catalina salad dressing, old cigarette machine, table lamps, and patterned carpet.

If you like your kitsch with a European flare, then Joso's is your spot. The seafood spot draws a deep-pocketed crowd, but the interior sports a boob-theme and is covered in busts, paintings, and folk art that you'd expect to find at an eccentric person's home (or on the cover of a Drake album).

Some will argue that old school diners are havens for kitsch, though I tend to think most of Toronto's spots like The Senator are too subdued for the designation. Full of retro charm, but not always kitschy. A notable exception would be The Amazing Ted's Diner in Scarborough. The shrine to bacon behind the cash register is marvellously tacky, as are the vintage signs throughout the space. 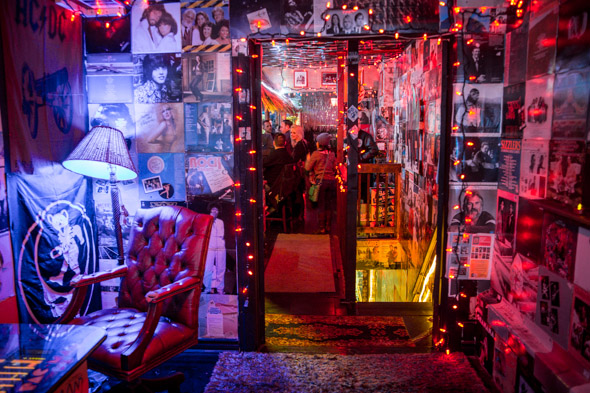 Toronto has plenty of bars that you might characterize as pseudo-kitschy, including the Drake Hotel, which reproduces a mid-century Canadiana that recalls Douglas Coupland's art work. For my money, I prefer places that seem more genuinely thrown together with kitschy objects found at thrift stores.

Swan Dive fits the bill in this regard with its board games, B-films, and vintage popcorn machine. Nearby Black Dice also has a nice kitschy vibe with its rockabilly theme and retro jukebox. Ditto for the Communist's Daughter.

Leslieville's Bill Hicks Bar is a kitsch paradise with its vinyl-covered walls, Xmas lights, and hodgepodge furniture. And what would a list of kitschy bars be without mention of the Boat in Kensington Market?

Last but not least, the rise of the tiki bar in Toronto has injected a dose of much needed kitsch into the city's nightlife. Shameful Tiki Room and The Shore Leave are two of the best in the kitsch department. 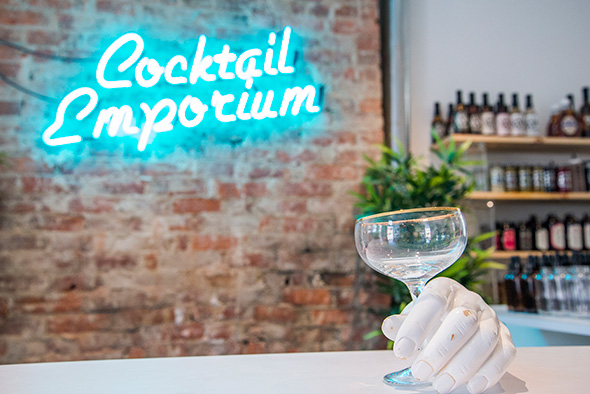 If you're looking to create your own kitsch palace, you could do worse than starting at Toronto's ample selection of thrift stores or the city's many flea markets, but there are also places that have done the hard work for you.

BYOB and Cocktail Emporium are both excellent places for kitschy bar accessories and stemware, while the Toronto Designers Market has a decent selection of kitschy pieces mixed in with more tasteful offerings.

The Monkey's Paw is without a doubt the best place in Toronto to find quirky and obscure book titles, and the Bibliomat book dispenser is kitsch in a nutshell.

Did I miss any kitschy treasures? Add your suggestions in the comments.