5 secret laneways to explore in Toronto

Toronto's secret laneways are are bastions of messy urbanism that remind us that cities weren't always planned. On the contrary, there was a time when development arose with little oversight or holistic thought.

We tend to connect with such places because thy feel authentic and harken back to the pioneering spirit that made urban development take shape in the first place.

Here are some secret laneways to explore in Toronto.

Probably the best know of Toronto's hidden laneways, Croft Street bears exploring for its length and diversity. You'll find old coach houses, garages adorned with impressive murals, and some of the city's finest contemporary laneway houses. The laneway serves as a palimpsest of Toronto history, which you can soak up in a 20 minute walk.

Who would have thought that the oldest house in Kensington Market is located in a laneway out of view? This farmhouse pre-dates confederation and much of the street grid in the area. Fascinatingly, the house immediately next door is one of the city's contemporary gems, a Tokyo-style loft known as Gradient House.

You could walk down Kensignton Ave. for years and not notice the little sign that says "to Kensington Place," an eclectic little cul de sac of former workers cottages hidden from the bustle of the Market. There's lots to see here, including a house that's been designed as a tribute to the Azores. 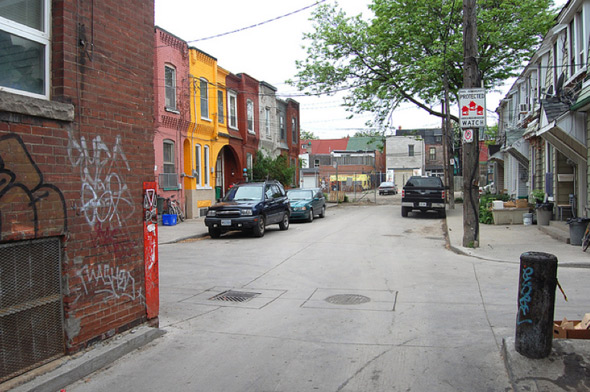 Walk along the west side of Spadina just north of Dundas on a busy Saturday afternoon and you'll experience one of Toronto's quintessentially urban scenes, but take 20 steps west into Glen Baille Place and suddenly everything is quiet as you're surrounded by brightly coloured Victorian-era row houses in this pretty cul de sac.

You might wonder how Glasgow received its designation as a street in Toronto because it far more closely resembles a laneway, but either way, it's one of the most interesting places in Toronto. Enter off of Cecil Ave. and walk north until you encounter a row of Second Empire houses across from a hidden parkette.