With Saks open and Nordstrom on the way, the Eaton Centre wants to put on an even nicer face, particularly near its Queen Street entrance. Cadillac Fairview, the owners of the mall, had initially tried to build a 65-storey residential building above 2 Queen St. East, but after running into difficulties with zoning, the company retracted its plans.

It's now come to the table with a new design for the corner, one that's drastically reduced in scale, but which would make for a grand entry to the south end of the mall. The latest plans for the historic curved building at the corner of Yonge and Queen involve the preservation of the brick facade (part of which is covered right now) and a three-storey glass addition at the top.

The renderings are reminiscent of the nearby Dineen Building, which has won much praise since its restoration in 2013. Perhaps unsurprisingly, the top level has also been earmarked for a restaurant here. There will also be expanded retail, offices, and a green roof. 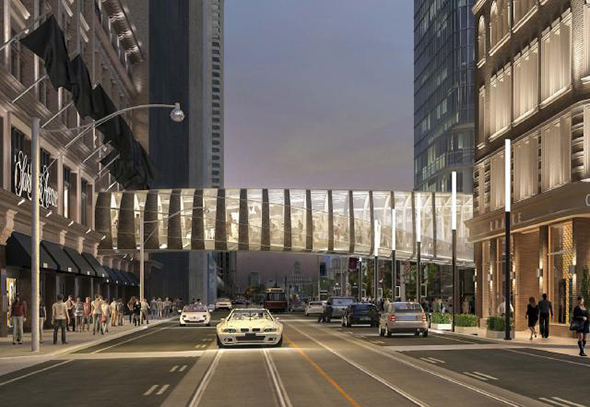 In conjunction with the release of these plans, a new rendering has surfaced of the sky bridge that links the HBC/Saks building to the main shopping centre. The plans are to replace the existing bridge with a contemporary design by Wilkinson Eyre Architects with consultation from Zeidler Architects (the original designer).

Both projects will prove significant updates to the southern end of the increasingly high end shopping centre.