A guide to the secret vaults of Toronto

Hidden away deep underground and in anonymous-looking buildings on the outskirts of the city are Toronto's biggest vaults. It's very difficult to know exactly where these high security storage areas are because, for the most part, their owners do everything they can to protect the location. Why make life easier for would-be thieves?

That said, the general location of at least a few prominent vaults around Toronto hasn't been entirely obscured. Take, for instance, Scotiabank's bullion vault, which exists in the deepest basement in the city far under the bank's Financial District tower.

It's pretty much impossible to get into this place, but when you're walking through the PATH, just imagine that underneath you is hundreds of millions of dollars in gold bars. Scotiabank had a similar set up in New York at the World Trade Center, which was destroyed in 9/11. The bank recovered $230 million, but some estimates peg the lost gold at a value of $200 million. 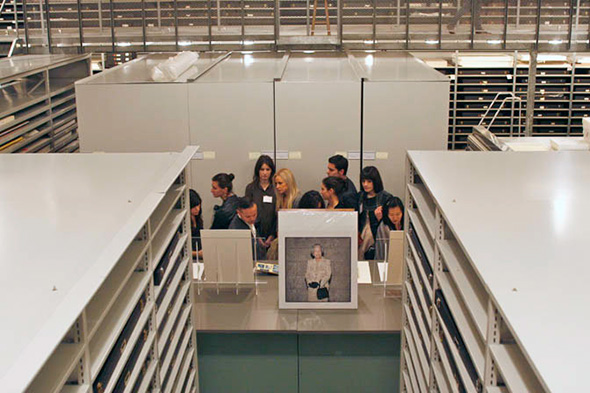 Less shrouded in secrecy but equally inaccessible is the AGO's vault, which houses the vast majority of the gallery's 73,000 works of art. Members used to be offered a peek into this storehouse of valuable artwork, but the area is now completely off limits to the public and media alike.

If the AGO's is the largest art vault in the city, it's certainly not the most obscure. It's well established that works are kept on-site at the gallery. Where someone like David Mirvish stores his art, on the other hand, is a matter of greater intrigue and speculation.

Described in a Toronto Life feature as "two concrete bunkers just off Toronto's grim industrial eastern shoreline," it's alluring to think of some anonymous industrial building in the Port Lands as hosting scores of valuable modern art pieces. Things that hide in plain sight have a tantalizing appeal.

But, what is perhaps more interesting than the vaults you can't access are those that you can. These places no longer hold valuables, of course, but you can still get a sense of the over-the-top security measures that were once used to protect the valuables these places stored. 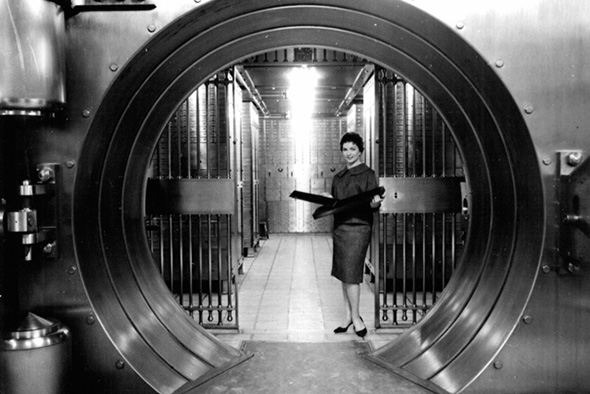 The best known of these is surely the former Dominion Bank vault at One King West. Now an upscale party venue, the structure of the vault remains mostly intact, including its nearly one and a half metre-thick door. It weighs around 40 tons and was a symbol meant to communicate the safety of this particular vault, but also the local economy.

It's easy enough to get a look at the entrance to the vault by walking downstairs from the main lobby at the hotel, though you'll be kindly asked to leave if a private party is underway at the time. The safe was never cracked, and so bears the title of impregnable. 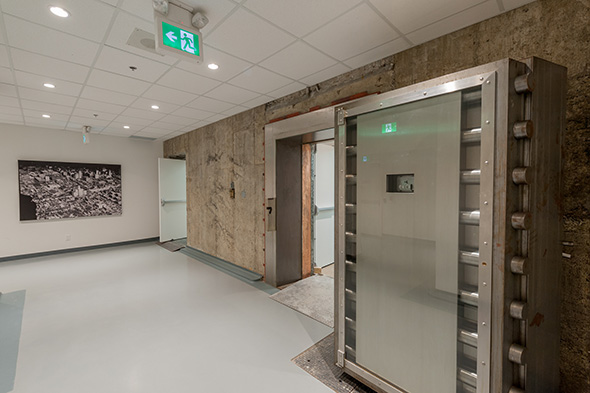 Another downtown vault that's been converted as an event space is located at 250 University Avenue in the former Bank of Canada building. Now a lounge and party space for IQ Office Suites, one marvels at just how big the space is.

At 4,500 square feet, this place used to hold a hell of a lot of gold bullion. One still enters through the massive steel door to this day, though now it sits permanently propped open. The concrete walls that surround the former vault are nearly three feet thick, so as to dis-encourage tunnelling efforts.

Other converted vaults around Toronto are harder to spot. The old vault at Commerce Court North (formerly the Canadian Bank of Commerce) now houses an eye clinic with little evidence remaining of the space's former use. In that sense it's similar to current day vaults, which are designed to be forgettable enough that one never takes interest in the buildings that house them.

Know of an intriguing vault story in Toronto? Share it in the comments.

Photos via the dtstuff9, the AGO, the Toronto Archives, and IQ Office Suites.