Just over two years ago, plans for a sprawling condo complex at Dupont and Shaw made waves. The proposed 393 units and 734 parking spaces at the Sobey's grocery store site was cause for concern from neighbourhood residents and city planners.

As Urban Toronto reports, one of the major issues with the site is that it's zoned as an Employment Area. The city is often resistant to grant re-zoning applications of formerly industrial lands, though this proposal could stand a good chance based on the current usage of the site (retail) and the plan to seek a Mixed Use designation, which would retain the existing commercial activity here. 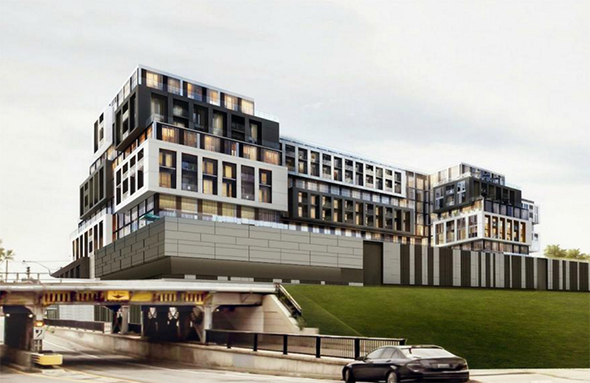 The project has been considerably revamped since it first surfaced in 2013. Gone is the two-tower design, replaced with a more modern-looking stacked building that recedes from Dupont St. (courtesy of Turner Fleischer) Both proposals attempt to keep the street-side scale of the building in check by having ground-level retail front the development. 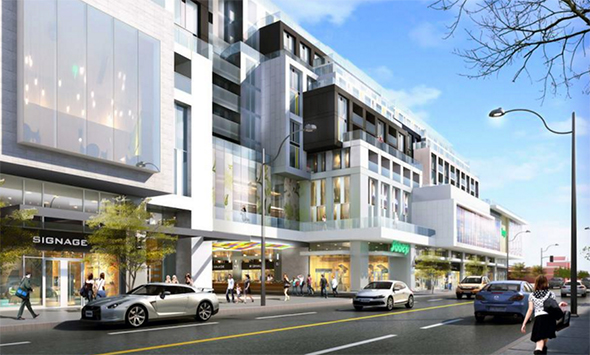 The proposed number of units and parking spots have been reduced to 364 and 653, which is only a modest alteration from the earlier proposal. It's certainly still the early days for this new plan, as the new rezoning application has only recently been submitted to the city, but the idea of using this suburban-looking site for increased density clearly has staying power.

This set of plans looks far nicer than the last, but there will be a number of questions posed about the proposal in the coming months, not the least of which is whether or not this section of Dupont St. can handle the increased traffic promised by the development.

What do you think of the new designs? Let us know in the comments.