Raccoon takes a ride on the TTC

Toronto's unofficial mascot was spotted on the TTC earlier today, to the surprise, amusement and chagrin of morning commuters. The raccoon was seen lurking around the subway platform sniffing at people's feet before boarding the train at Spadina station.

As reported by CP24, trains were briefly delayed before our furry bandit-eyed friend disappeared into the subway tunnel. It's unclear how the raccoon got into the station. 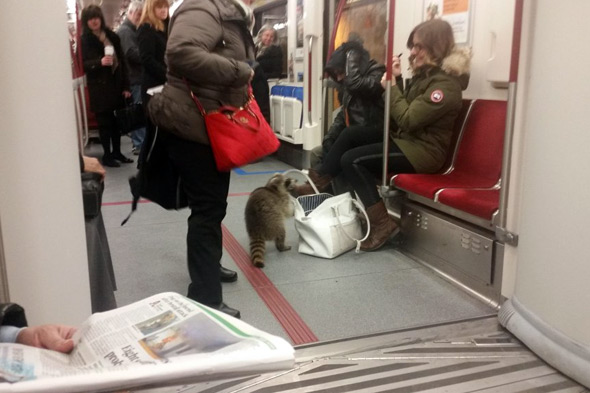 This morning's adventure is just the latest quirky raccoon sighting Toronto has witnessed in recent history. In December, someone took a video of a raccoon stealing a donut from a local bakery. Last summer, a raccoon was spotted climbing a crane at a local construction site. And who can forget the infamous #DeadRaccoonTO.

Brief delay at Spadina, southbound due to a raccoon aboard the train! @TTCnotices pic.twitter.com/Q3yPzLU5iK

Sightings of animals on subway cars are rare but also nothing new. In 2010 this pigeon captivated commuters as it took a ride on the subway and exited the car at its desired stop.

Of course, it's too early to tell whether this latest raccoon will join the pantheon of Toronto's most famous animals.